Steve Zissou will outlive us all

Unlike many others out there, underwater environments tend to be some of my favorite areas in video games. So when something like The Aquatic Adventure of the Last Human comes along which takes place entirely underwater, I can’t help but get excited; especially when they look as great as this one does. I mean, check out all that lovely marine flora and those huge, colorful fishes!

Many underwater sections of games end up suffering due to slow movement speed, sometimes to an incredibly frustrating degree, which might be part of the reason why some people detest them so much. Luckily, this is not a problem for The Aquatic Adventure, as the submarine controlled by the player is able to move quite swiftly through the water. But that’s just the first step to creating a truly engaging underwater video game. 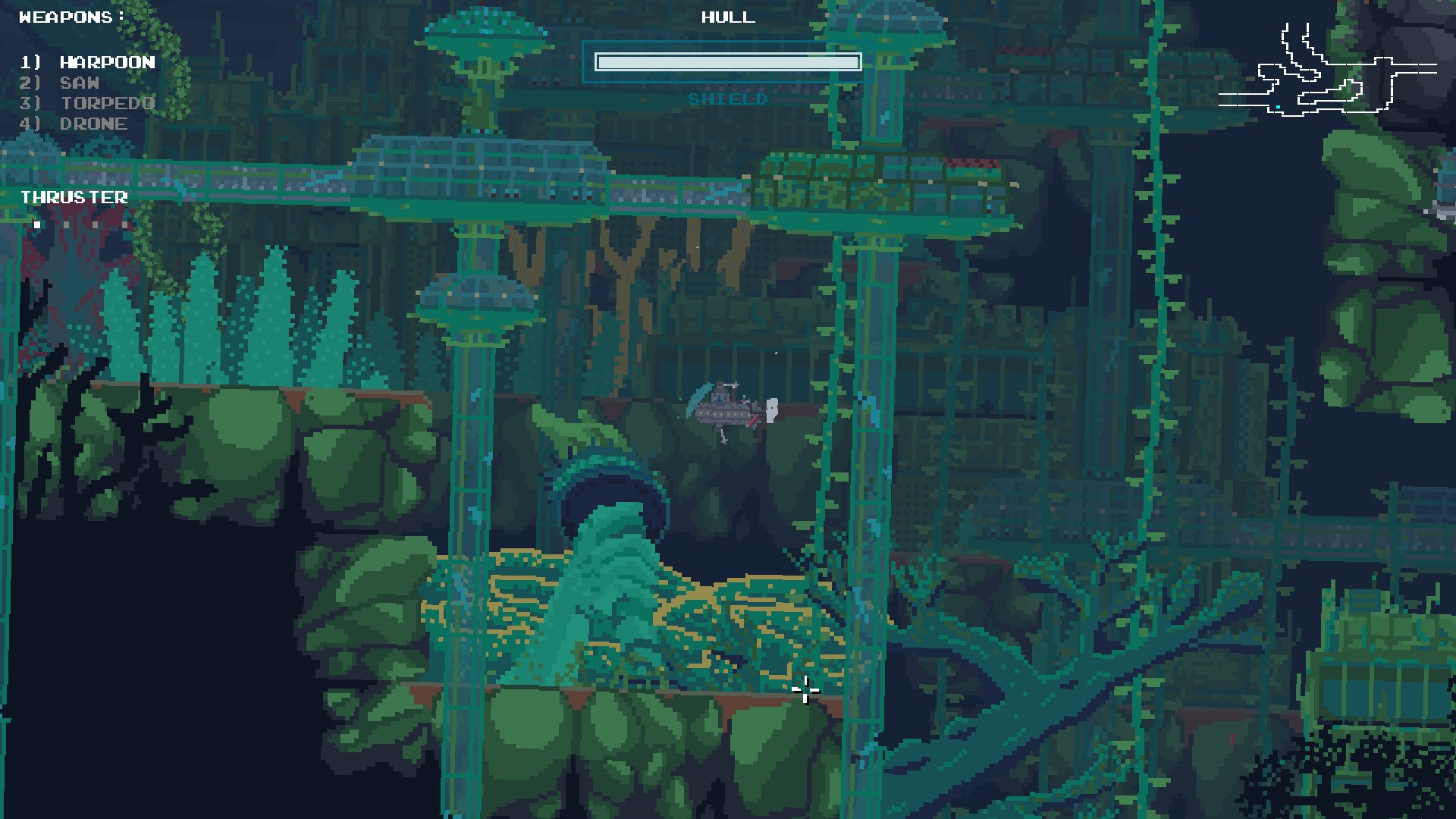 The Aquatic Adventure of the Last Human tells the story of the last surviving human being, thrown into an unknown year in the distant future via a wormhole. All that is left of our civilization on Earth has been entirely submerged under the ocean. Crumbling cities, broken machines, and other remnants of human civilization are still present, slowly decaying in the sea. The world is now thriving with sea life, as huge fish swim about the dilapidated structures and aquatic plants grow out of control. The only clue about what happened in the past are holo-tapes containing the last recorded information of humanity from the year 3016.

This is not a story of hope. As the last one left, you have no way of repopulating the world. Humans had their time, and it’s over now. The only thing left to do is try and figure out what happened and live out the rest of your days attempting to make the most out of your present situation.

The player character passes the time aboard a submarine, exploring the serene ocean depths, floating among the thriving sea life, and looking out at remnants of the past. There seems to be very little danger in the surrounding waters; groups of angry giant clams here and there, some pipes spilling out corrosive gases, a few floating sea mines, but for the most part it’s smooth sailing. That is, until the last human encounters The Worm.

Much like Shadow of the Colossus, there are very few threats in the world of The Aquatic Adventure aside from the bosses. The game compensates by making every boss fight unique, challenging, and memorable. Conquering these massive sea beasts will require puzzle-solving skills, strategy, quick reflexes, and most of all perseverance. The submarine will most likely be destroyed many times before a boss will finally be defeated, but with enough observation and planning, any obstacle can be overcome.

Thankfully, the submarine’s abilities will take some of the edge off of the difficulty of boss fights. A damaged hull will slowly repair itself automatically over time, so as long as the sub stays out of danger long enough, it can come back full force in the heat of battle. Upgrades can also be found scattered throughout the sea, offering new weapons, tools, improvements to the hull, and more. So if a player is having a particularly rough time with a certain boss, a little exploration might result in better equipment to make the fight a bit easier. 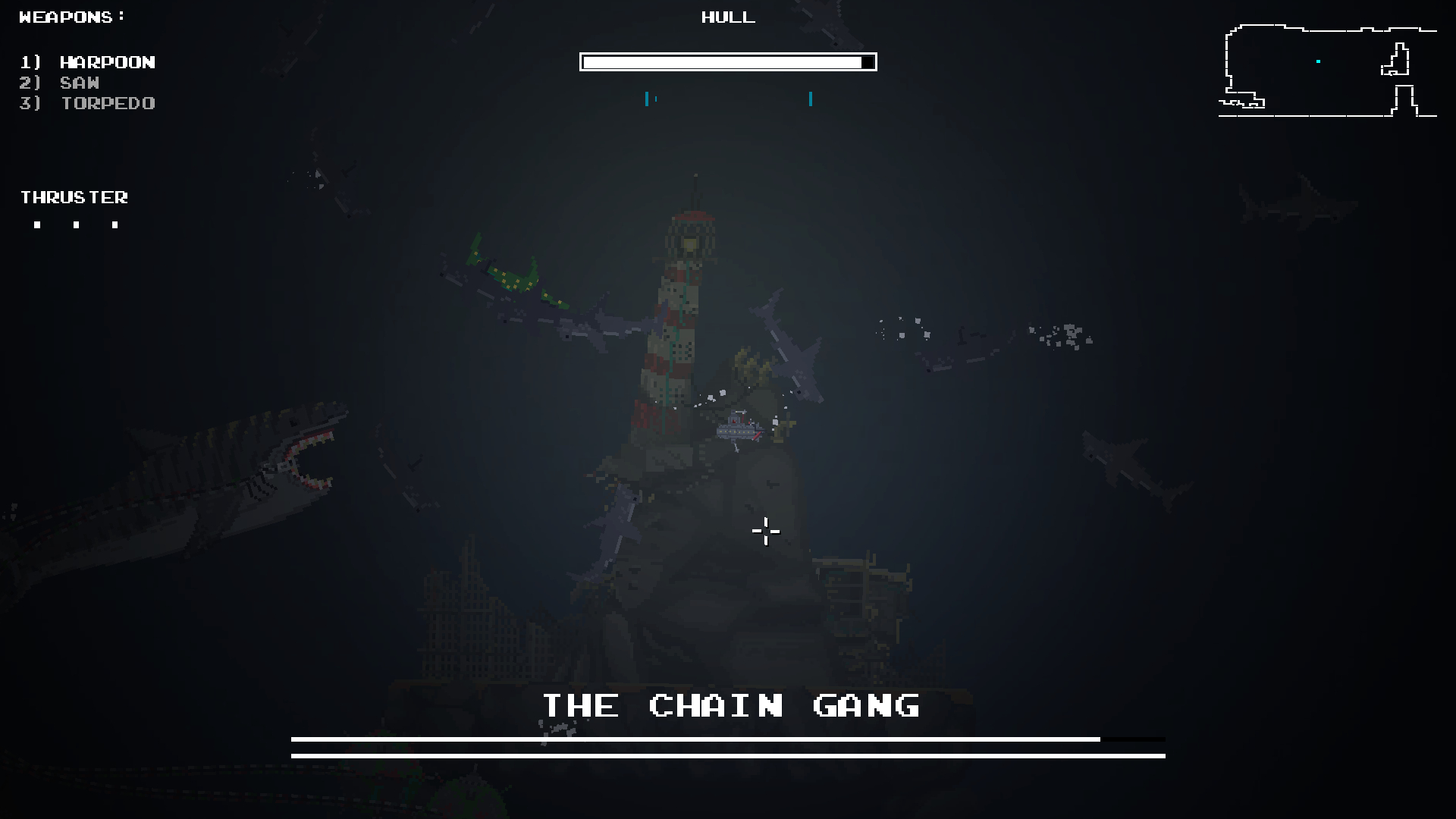 There are eleven boss fights in total, but most of them can be fought in any order the player chooses. In the vein of Metroid, new areas can be opened up with upgraded equipment. Every time a new item is acquired, it’s usually a good idea to fully explore the map to figure out all possible options for progress and decide which boss to take on next. Although there are a few instances where the player does not have a choice, and the only option for escaping is to fight their way out.

The real heart of The Aquatic Adventure of the Last Human comes from the graphics. While the thought of exploring a large map with very few threats may seem uneventful, I almost didn’t even notice most of the time due to the entrancing sprite art covering every inch of the map. The environments and sea life are so detailed and well animated that they seem to come to life in movement. Everything looks painstakingly hand drawn, with personality oozing out of every object. I had to spend a few moments in each new area just admiring everything around me, from the tangles of seaweed and peaceful (yet sometimes startling) sea creatures to the ruined edifices and malfunctioning electronics. While it looks beautiful even in screenshots, I honestly don’t think still images do this game the justice it deserves.

To add to the whole charming ambiance, the wonderful electronic soundtrack helped to capture the beauty and strangeness of an underwater world, while also ramping up the tension during boss encounters. Other visual effects added to the charm as well, like how the screen slightly tilts depending on the direction the submarine is moving, the subtle flickering of text to indicate it’s being viewed on a monitor of some kind, and what looks like handwritten text which appears upon arrival to a new area. All of these little details add up to give The Aquatic Adventure its own unique flair. 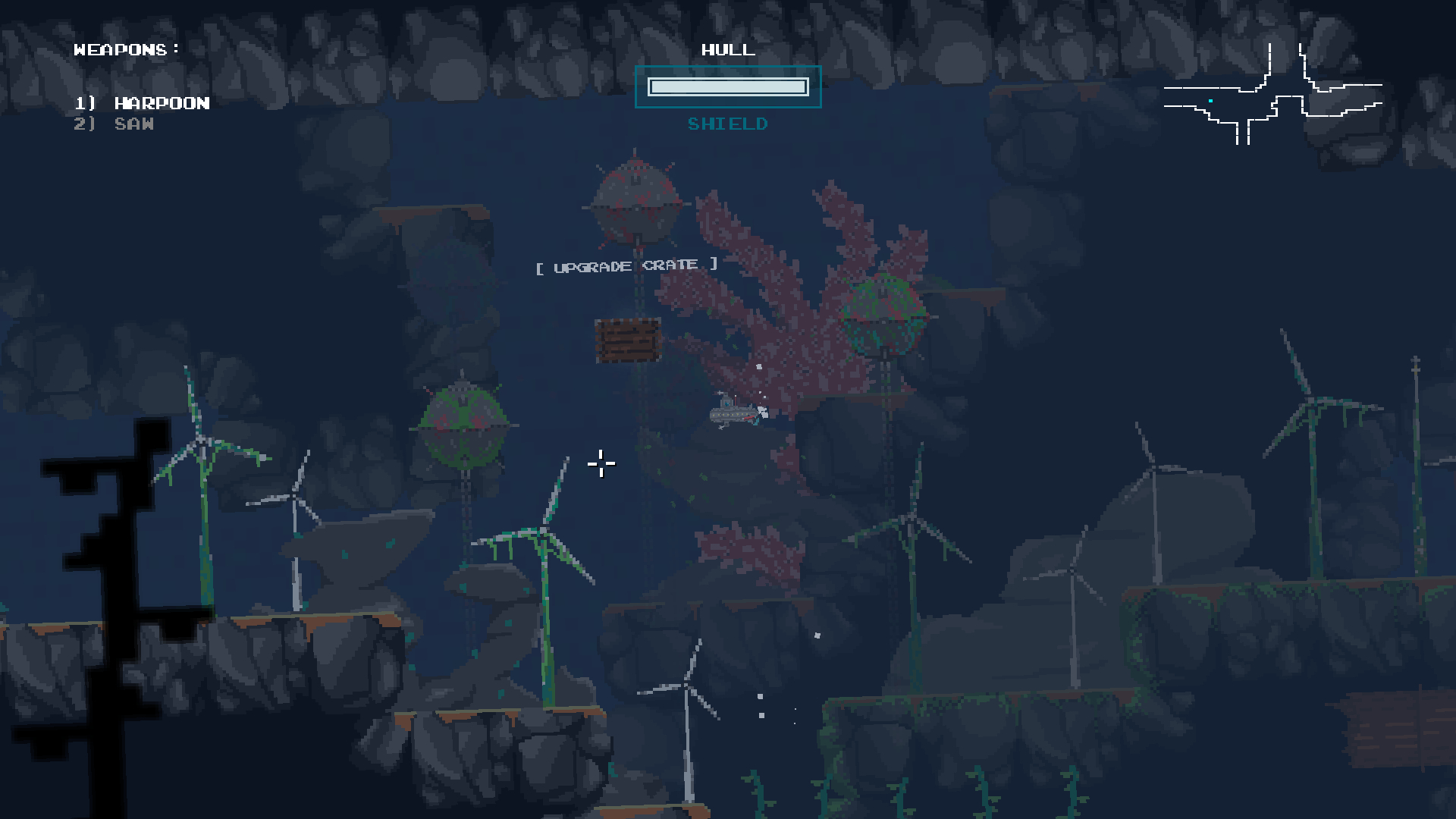 If I could offer suggestions for improvement, I do think there needs to be more map functionality. Especially for a game where backtracking is important, it would have been nice for certain obstacles to be highlighted on the map, like green lines to indicate vines which need to be chopped or grey bars to specify doors that can be opened. Of course, obstacles leading to secret areas can be kept hidden from the map, so that only the keenest explorers will find them. I might have also liked a manual save option, for those instances where I was killed by a part of the environment, requiring me to navigate large parts of the map all over again to get back to where I left off, although the fast-travel system did help with that somewhat. Lastly, I did encounter a few annoying bugs while playing, but thankfully they were fixed very quickly.

I really enjoyed my time with The Aquatic Adventure of the Last Human. It may be a bit on the short side, especially for players who are able to take down the bosses with relative ease, although most players are probably looking at about six to seven hours of playtime. But in that short amount of time, it manages to pack a satisfying amount of action, tranquility, and exploration into a concise, captivating adventure. Just don’t be afraid to dive too deep into the ocean depths, no matter what horrors might lurk in the dark abysses below.