Ah yes, the movie games. For every G-Force there is a Thor. For every Rango you have a Megamind: Ultimate Showdown, and for every Captain America a James Cameron’s Avatar: The Game.

Like that last one, The Adventures of Tintin: The Secret of the Unicorn is another Ubisoft licensed game based, for the most part, on the new Spielberg movie. But does it manage to offer a better time for players this time around? 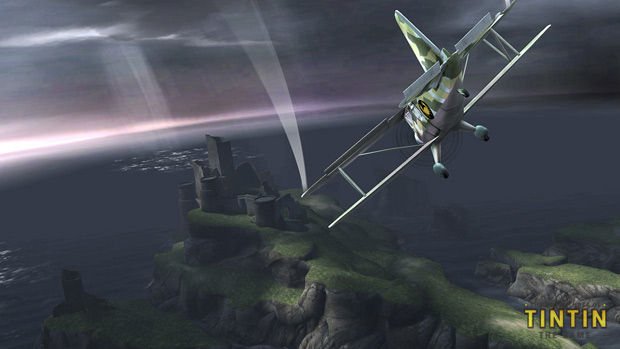 At its heart, Tintin is not so much a children’s game as it is somewhat of a throwback to the old 2D Prince of Persia and Another World games. The vast majority of the game sees you controlling the boy reporter with his questionable fashion sense as he side-scrolls his way from room to room.

The basic trappings of platforming are all here. Jump, climb up ledges and ladders, wall jump off conveniently placed walls, or even hit a baddy with a few punches. The platforming itself is a joy to play, with just the right mix of cartoon and realistic physics to make it feel like you’re really in the world of Tintin. Combat often offers you the choice to go in as a brawler, or to sneak around enemies and instantly take them down from behind.

Occasionally you’ll come across enemies who shield themselves with an armor suit or an umbrella, requiring you to use throwable objects like beach balls and explosives or luring the enemy to a slippery section on the ground, making him go “wee-wee-wee-wee-boing!” If you just want to pummel enemies head on, then in most cases you can, but there’s always the option to take a more elegant approach by using your surroundings and this adds a lot more fun for the more experienced players. 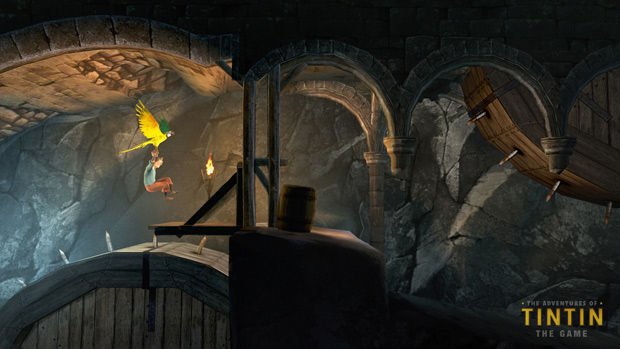 The 2D sections use some clever 3D to give you access to hidden paths for collectible Golden Crabs and make it feel like the world has some more volume than it appears to have. Whether you’re a kid or an adult, these sections are a blast and thankfully they’ll have you occupied for most of the game.

At other times you’ll move out of a 2D section to follow a corridor in 3D, and this is where you notice that the game is much better off with its 2D gameplay. It’s meant to switch the perspective around a bit and keep things varied, but none of these sections ever add anything other than the obligatory “run from danger towards the camera” bit. While the swap to playing Snowy can be fun to play here and there, it feels more like he just had to be put into the game in some fashion — sniffing paths and exploring sections Tintin doesn’t fit in — than that he’s an integral character.

Likewise, there are some plane flying levels where you’ll evade obstacles and occasionally shoot at rocks or enemies. These levels sadly never offer anything that is solid in gameplay, expands upon the story or the world of Tintin, and quite frankly the flying was done a lot better in the Legend of the Guardians: The Owls of Ga’Hoole game. A few simple swashbuckling sections can take a little bit to figure out how to work the controls, as the analog stick suddenly moves your sword while your character is on rails. Slightly more entertaining are the various driving missions where you’ll alternate between driving your bike and shooting at vicious Arabs/Berbers from the bike’s sidecar.

None of it is terrible to play, but neither will it blow you or your child’s mind. It’s just there to spice things up from the platforming and break the inevitable repetition, and at least it does that well enough. Still, the entire journey through the game’s “Tintin” mode, in which you play through the movie’s events, is an enjoyable and very family-friendly one. There’s no drinking, no blood, and defeating enemies with retarded AI will just make them lie on the ground with their butt up in the air. 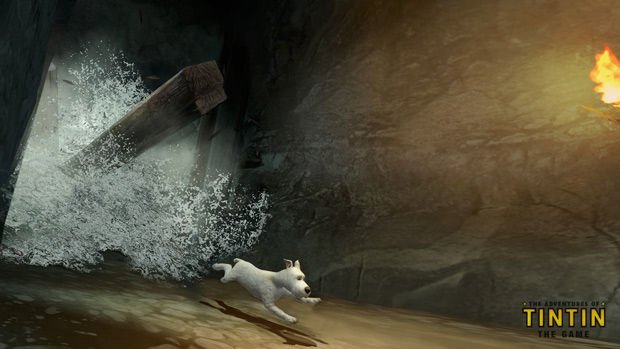 Beyond the “Tintin” story mode, there’s a challenge mode where you can play some more of the plane, swashbuckling, and sidecar sections. This mode also lets you use Kinect if you have the Xbox 360 version of the game, which offers some good family fun. Swashbuckling lets your inner child get its due, with on-screen prompts for where to hold your arm to block an incoming blow and flapping your arms around to slash at pirates in different directions.

The sidecar and plane challenges are controlled by holding your arms out as if you’re holding the handle bars or a steering wheel, respectively. The plane’s shooting challenge is brilliant, though, since you can shoot down enemy planes by moving both your hands back and forth. The Kinect functionality doesn’t offer enough to buy it for this alone, but if you’re wondering which version to pick and you have Kinect, the Xbox 360 version is definitely the one to get.

Tintin also has a very expansive co-op mode where Ubisoft Montpellier seems to have gone all out with the craziness. After the conclusion of the movie’s story, Thompson and Thomson accidentally hit Captain Haddock in the head and this cues a wonderfully bizarre dream state for the drunken captain. Here you’ll unlock level by level by playing through weird alternate versions of the game’s locations, in which enemies make reflective remarks on being inside a dream.

These co-op levels are of the 2D platforming kind and you’ll have access to some new attacks like Tintin’s hookshot that never appears in the story mode. You can choose to play it solo if you want, but to get all the collectibles you’ll sometimes need a different character or a co-op partner, plus it’s more fun to play it cooperatively. You’ll also get a chance to play some of the side characters who each have their own special ability. 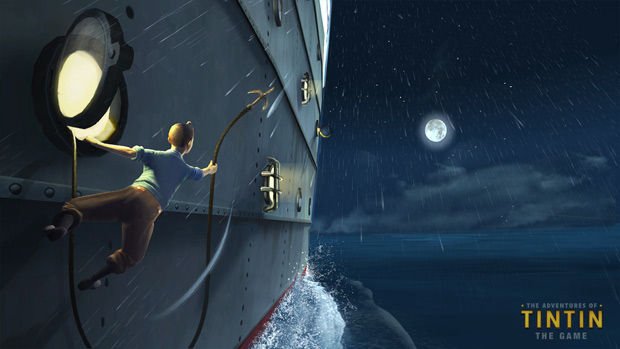 Although you can probably breeze through Tintin‘s main story mode and spend an hour or two completing all the challenges, the co-op mode will offer at least a bunch of hours worth of extra content whether you play it by yourself or not. Moreover, the game does a great job at giving you that Tintin vibe and atmosphere of boyish adventure, despite the graphics reflecting that somewhat creepy look the characters have in 3D.

It should be noted that Tintin can also be a bit of a dick in this game, though. He’ll just barge into places without permission and steal other people’s property without so much as a blink of an eye. If a servant is just there to protect his master’s property he’ll only get a black eye for his trouble. Or worse, be set on fire. I also don’t really understand this obsession with having Tintin and enemies end up with their butt in the air when they are knocked out — in various positions — but c’est la vie.

Putting that aside, there’s a lot to enjoy in this game. The Adventures of Tintin may not be a fantastic game, but as licensed games go it’s far more than decent. The different modes and variety in gameplay do not always reach the same level of quality, but the majority of it is a lot of fun to play for kids and adults alike.