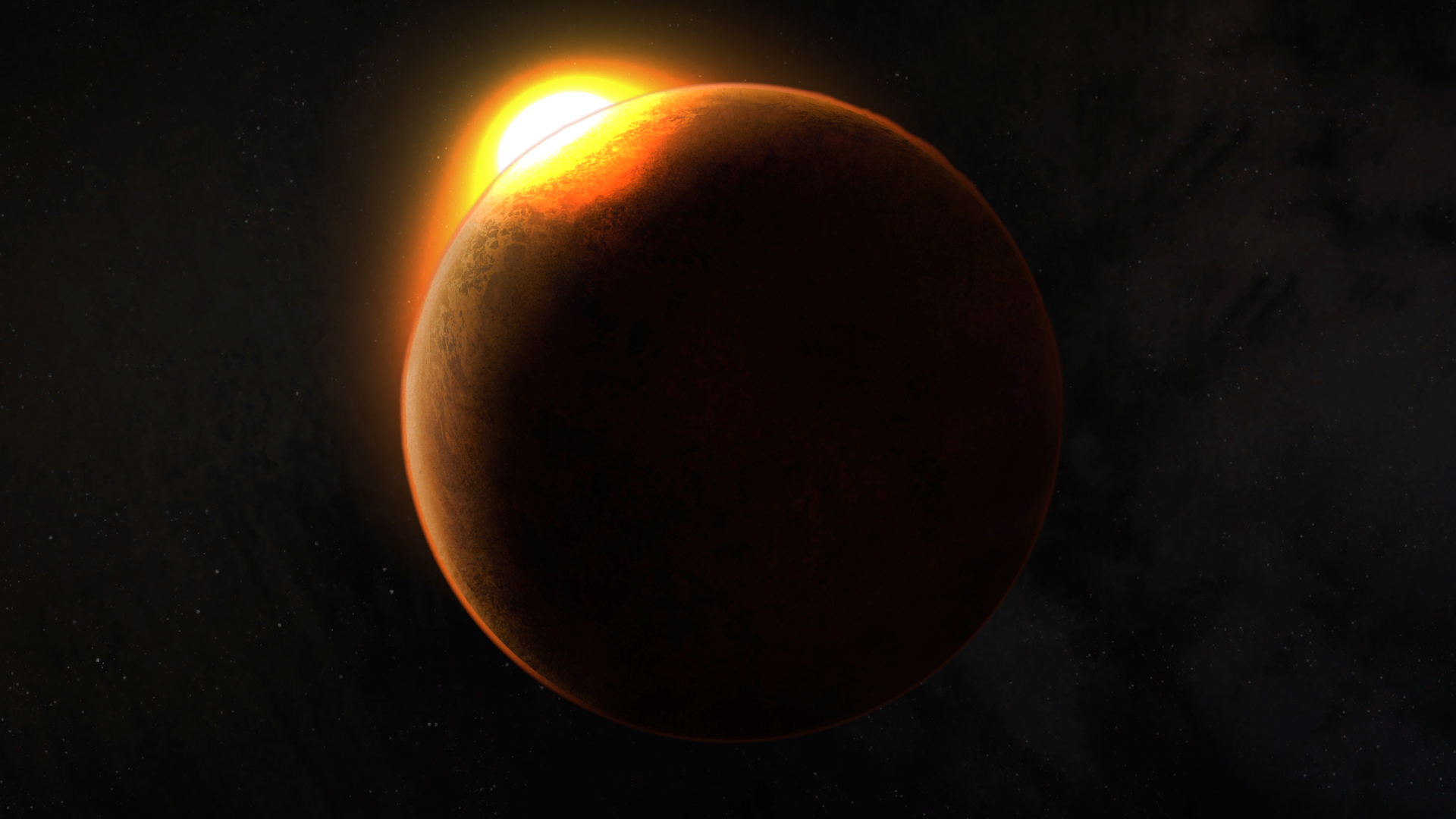 Digital board experiences are definitely an untapped market, it seems. There are a few great ones, like The Witcher Adventure Game and of course Tabletop Simulator, and now Tharsis hopes to be the next great eBoard game(TM). 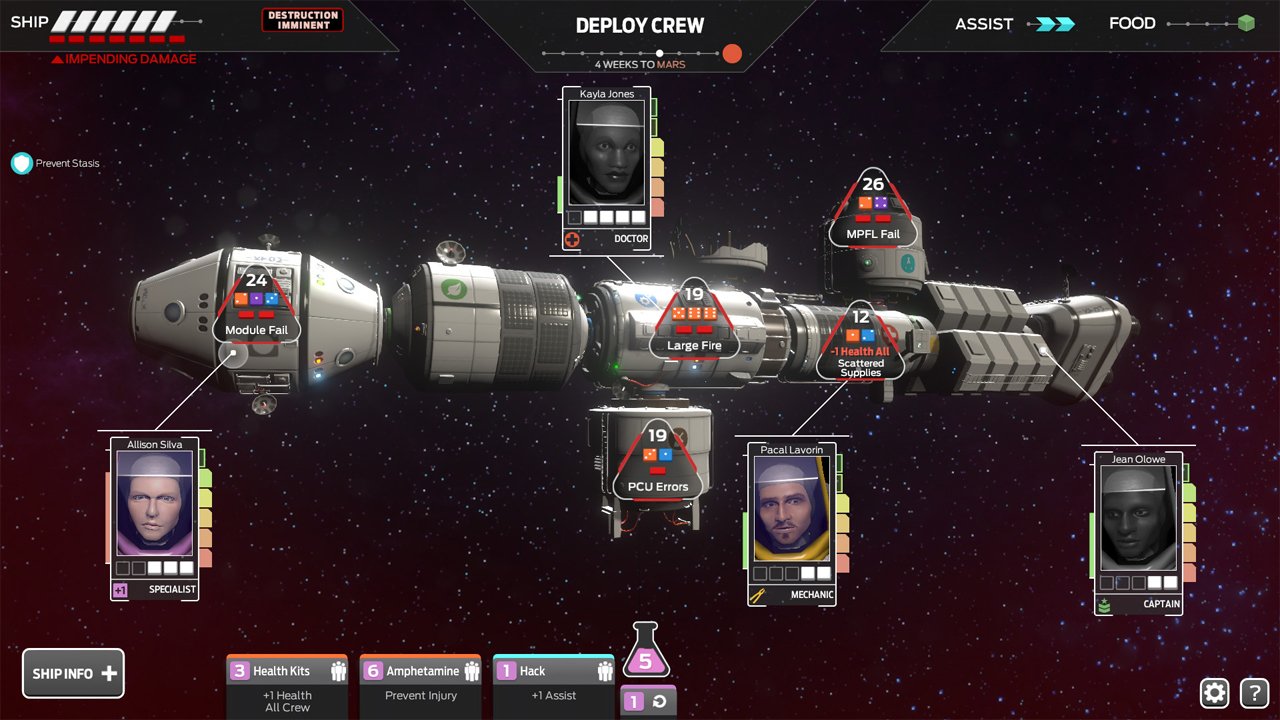 Tharsis puts players in command of a crew en route to Mars where everything possible is going wrong. It sets the tone early in the tutorial by having a crew member straight up die. In fact, every new adventure begins with that crew member dying, which I find morbidly hysterical, especially considering how often I’ve started new games.

In between each “turn” is a small, still-image cutscene that explains a little bit of how the plot is progressing. They play every playthrough, and while they are easy to skip, it’s a minor annoyance to constantly be skipping them after every single turn. The plot unfolds as quick as the player is good; the further a player gets, the more story they reveal. Generally, this will be a very slow drip of new information, since it’s very fucking difficult.

Tharsis is essentially a virtual board game. The objective is to make it to Mars, which is ten weeks away, where each turn is a single week. The thing is, shit goes wrong on the ship every single turn. With the four surviving crew members, players must roll dice to fix the many issues plaguing the ship. I’m talking literal dice rolls here, as in you see the dice roll and bounce off the edges of the screen until they stop.

There are seven sections of the ship, and each of them have a specific purpose. The Med Bay can heal crew members, the greenhouse grows food, and so on. In order to perform these actions, a crew member must be in that area and roll their dice. If that dice roll fits a predetermined requirement, the player can use those dice to complete the action. To grow food, for example, a player needs two or three identical dice. To heal in the Med Bay, a single die of a five or six will do.

Eating food will restore dice, which is crucial to survival. Growing food, however, is hard to fit in. The alternative is cannibalism. Dead crew members will soon be available as food, if the player wishes to indulge. Human meat isn’t as beneficial as grown food, since it reduces the max health of the crew member by one, but it’s more available. Players can even elect to kill crew members in order to get more human meat. A decision like this should carry a lot of emotional baggage with it, but the fact is that it really doesn’t. It’s terrible to think about, but never quite hits home in an impactful way.

Dice can also be put towards research, which will grant players extra actions and saving graces. The research bar can accept six dice – one for each possible result. Each die placed on the bar grants a research point. If at any point the player chooses to use their research for an extra action, like instantly restoring ship health, those points are removed. If the bar is completely filled, the points are kept but the dice are removed. Mechanically, this is a great way to not waste many extra dice that would otherwise be lost. 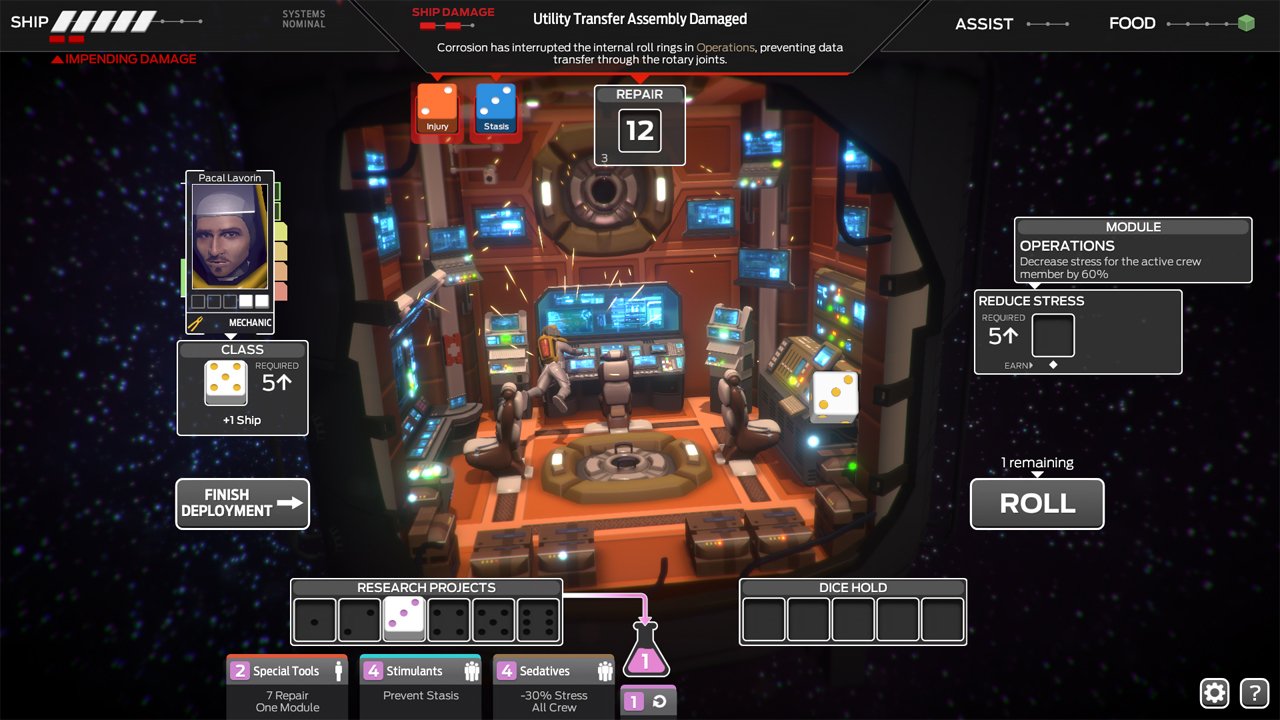 Each crew member also has a specific action they can perform. Performing these actions is similar to the module actions: rolling a die that fits a predetermined requirement allows players to use it for a crew action. All these actions fall in line with the crew member’s title: the Doctor heals other members, the Engineer repairs the ship, and so on.

Extra crew members can be unlocked by hitting certain goals through every playthrough. These are lofty goals, like eating 300 pieces of human remains, but it is nice to have something to always be working towards, even if it is often unintentionally. These characters aren’t necessarily better, as the “better” crew actions really just come down to personal preference.

The ship itself is constantly under distress. New events of varying severity show up at the start of each turn, ranging from near-catastrophic to “eh, I’ll get to it eventually.” Events have “health,” and when an event’s health is completely repaired, the event is prevented. If an event is present at the end of the turn, its effect will occur until it is taken care of.

A player repairs an event by rolling enough dice to reduce its health to zero. If an event has 12 health and a crew member rolls two sixes, great! The event can be taken care of. It doesn’t matter how many dice rolls it takes to get rid of the event, just so long as it is gone before the end of the turn. 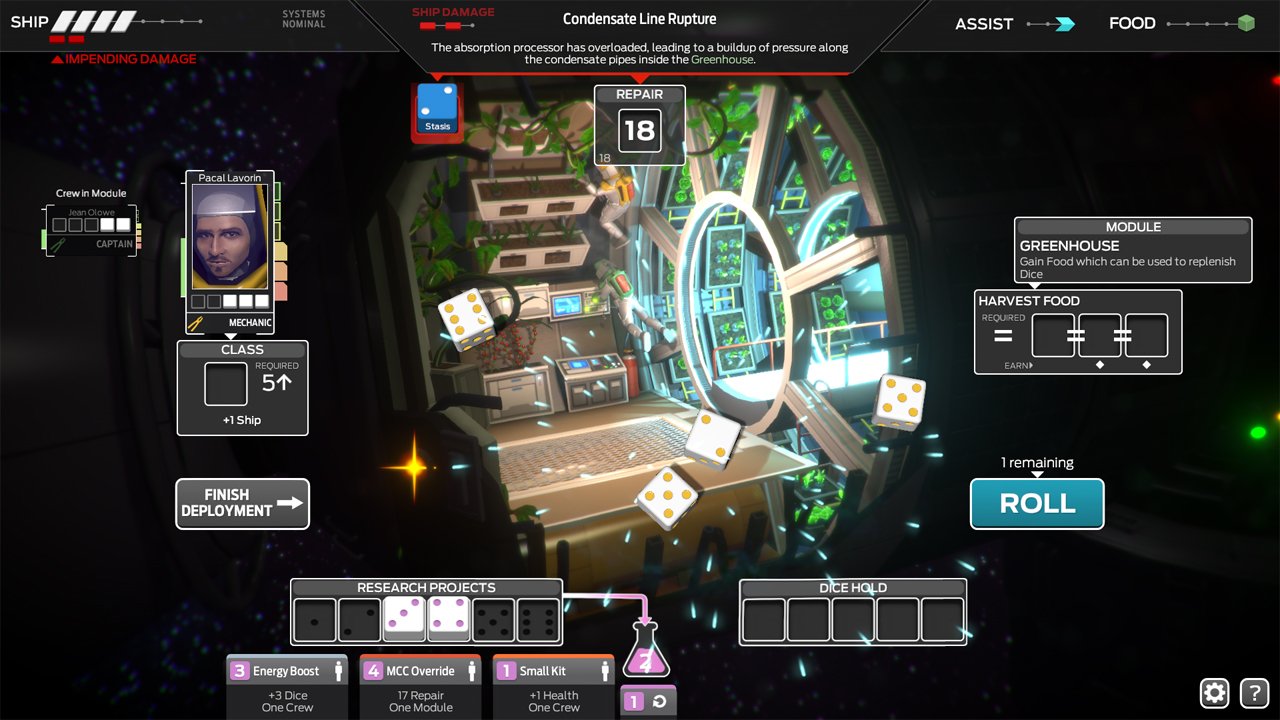 While rolling to clear an event, certain numbers of the die will have negative status effects associated with them: Stasis, Void, and Injury. If a rolled die matches the Stasis number, that die is frozen and cannot be re-rolled. If the Void number is rolled, that die disappears completely. Rolling the Injury number reduces the crew member’s health. To prevent this, a resource called Assist can be gained. If the player has any Assists available, they will be used and nullify any of these status effects.

The problem is that Assists are used automatically, even when it isn’t necessary. Let’s say that an event only has two health remaining. A crew member might roll two dice: a two and a six. If the two has Stasis attached to it and the player has an Assist, then that Assist will be wasted on that die, since it was going to be used as a two anyway.

This issue comes up quite often, and is nothing but frustrating. Sometimes, two status effects will happen at once, one of which is clearly non-consequential, and the Assist will be wasted on the status effect the player doesn’t care about. Knowing that Assists are automatic forces players to think about which astronaut they send to which module, but having the game completely take over an important resource eliminates too much player agency. While changing this would remove one element of strategy, it would add another that would alleviate a lot of frustration. 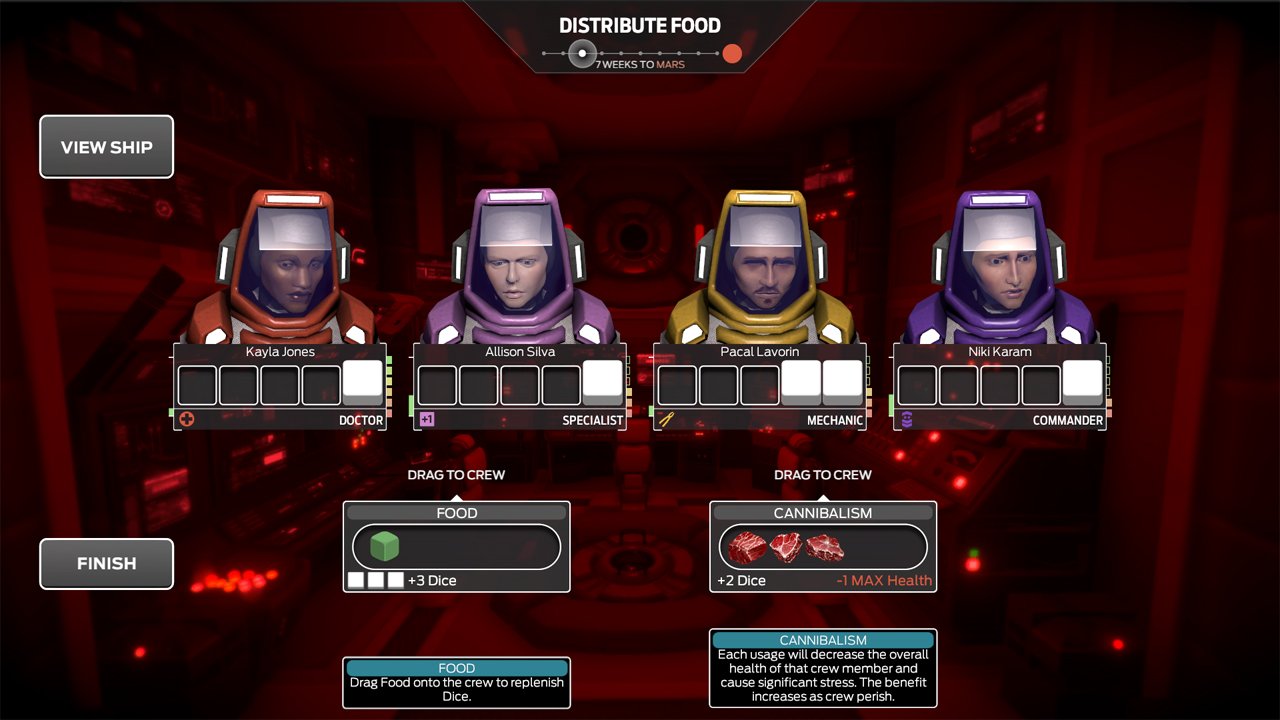 It often feels that Tharsis relies too much on dice rolls. Overcoming intense obstacles often doesn’t result in a feeling of accomplishment and pride, but one of happenstance and luck. It’s likely intentional, to give the player the feeling that the situation is never really under control, but it’s frustrating enough to destroy one’s interest in trying again.

That’s not to say that the player has no impact on the results. There are very important decisions the player must make in order to help the crew survive. The order in which crew members go to tackle an event can change the impact of the turn. Sending in a Specialist first, who gets an extra re-roll, has a better chance of bringing down an events health than anyone else. Doing so can allow other members to have free dice available, which can in turn let them use their special ability to heal other members, repair the ship, or grow food.

Dice are Tharsis‘ biggest resource, and mismanaging them will end the game very quickly. As I continued to play, I noticed just how important dice placement can be. Ideally, the player never wastes a die. Between crew abilities, module actions, event repair, and research, the player should be able to find a place for every single die, luck providing.

There’s also the matter of using research abilities wisely. These can be used at almost any time, and they have saved my butt more than once. Evaluating the situation as a whole is crucial; it can be better to use research and crew abilities to repair a ship’s health instead of getting rid of events. It’s a short-term solution, but sometimes that’s all you need. 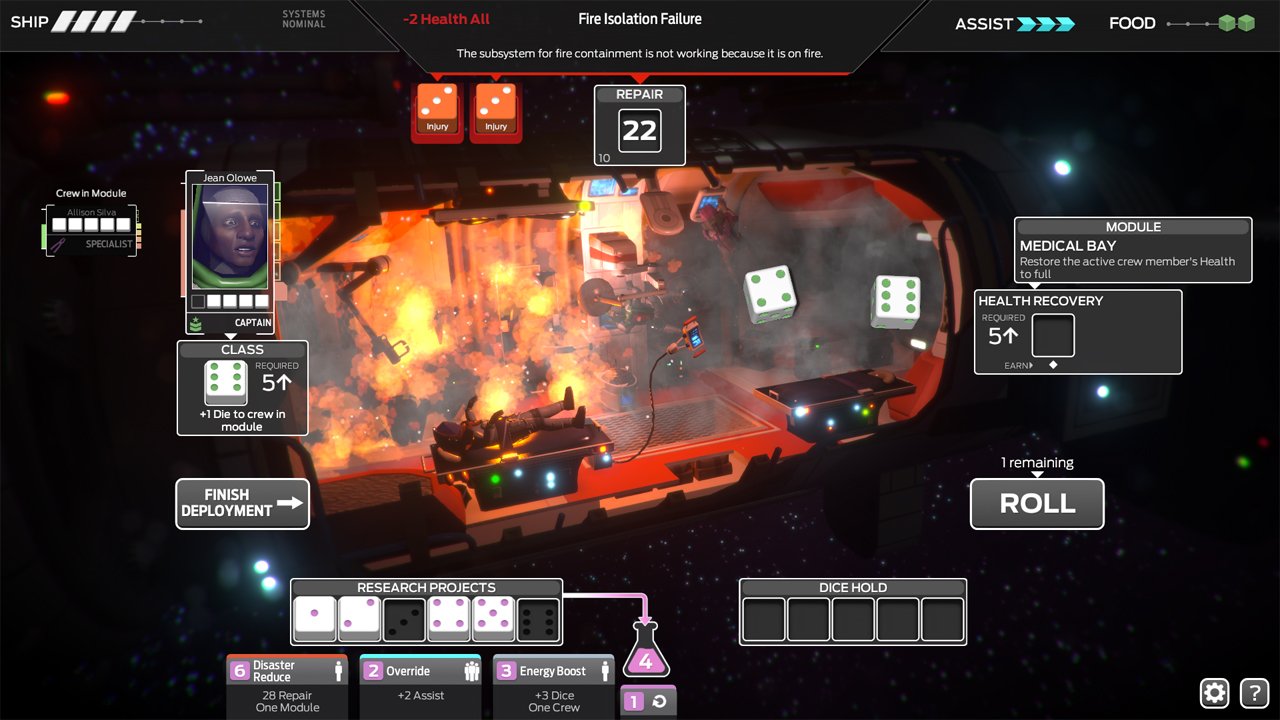 In between turns the player is forced to choose between different crew members’ ideas. These often have positive and negative effects to them. One might add a piece of food but take away one health from every crew member, for example. There are little blurbs to go along with these decisions, but the written words make little to no sense in conjunction with the effects. This widens the disconnect between any attachment to the crew members and serves to remind the players that this is just a game.

Not taking a crew member’s idea can result in a loss of sanity for that crew member. As the sanity bar increases (which means they are losing sanity), their ideas will become worse and worse. Other events, like cannibalism and receiving injuries, also serve to increase the sanity bar.

A playthrough ends when either no crew members are left or the ship’s health is depleted. Early on, runs will likely last under ten minutes. As the player understands more and begins to utilize their resources a little better, runs will get slightly longer. A completed run will take approximately 30 minutes, depending on how much time was spent thinking.

There’s also a hard mode. But fuck that. 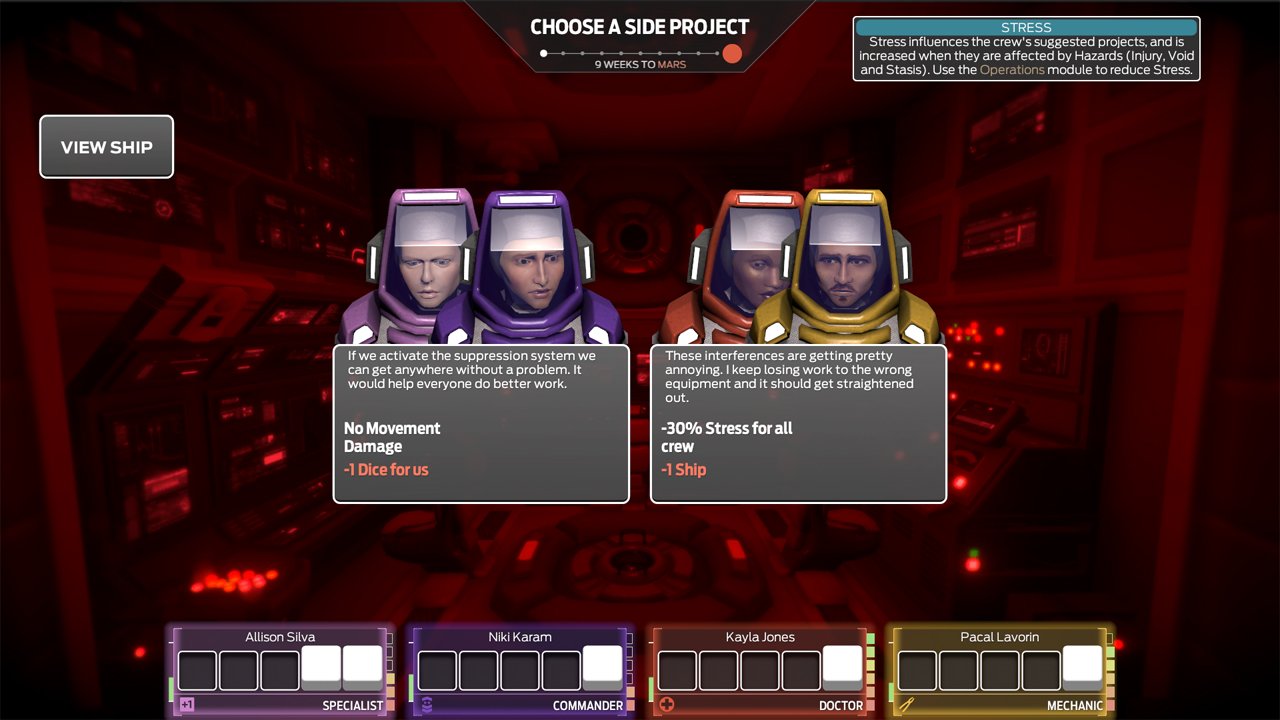 Visually, it all looks pretty wonderful. Information is displayed clearly to the player and everything on the user interface is easy to understand while not being cluttered. Stasis and Void are displayed as two very similar colors, however, which makes it hard for colorblind players to notice the difference. The cutscenes are drawn while the game itself uses 3D models. The faces of crew members are a bit bleh, but while looking at the ship itself, all else is forgiven.

There’s a lot of small touches that both hurt and help. The cutscenes are always the same, and it becomes annoying to have to skip the cutscenes in between every turn. On the other hand, the narrator will be male or female, depending on which commander the player has. The popup that explains what crew idea choices are also pops up every single playthrough, which is another slight annoyance. Looking around the interiors, however, shows a strong attention to detail that really helps the ship come alive.

Tharsis is a good way to spend 10-30 minutes to see what happens on the next journey. It’s a very harsh battle against the unknown, and can be utterly soul-crushing. Perhaps too soul-crushing, actually. Players will, at times, feel so defeated and useless that playing again seems pointless. And maybe that’s the point, considering the circumstances. I wouldn’t recommend to marathon Tharsis in an attempt to complete its journey, but instead to boot it up every once in a while and hope for the best.