Count on this: where there’s a new Nintendo portable there’s a new Tetris game. This time around, for the Nintendo 3DS, it’s Tetris Axis. A strange name for a strange system. And it’s a prety strange game, too.

Yes, there’s classic Tetris in here somewhere under all the 3D graphics, party modes, extra features and new connectivity. It’s just that it’s not as good as the last time you got a Tetris game for a new Nintendo portable.

There’s a dozen and a half new modes in Tetris Axis that play on the classic game formula. I like some of them, but diehard fans of the traditional formula probably won’t like any of them. Hudson Soft was trying to do something different and while I appreciate that, the end result is a game that seems to go in every direction except the one direction you’d expect. Well, you’d expect 3D silliness, and there’s plenty of that.

Because there’s a lot of game modes to cover, I’ll briefly go through them. Marathon has you clearing as many lines as possible. You know, standard Tetris. Fever mode has you playing in a narrow matrix to clear as many lines as possible in one minute. In this mode you’ll earn coins that can be exchanged for items. These items will give you power-ups to make your life a bit easier. I love a good Time Attack mode, and this one’s not bad, though not that much different than Fever mode. This one also has earnable power-up items, like the cascade tool. At a cost of 50 coins, this item will push down blocks to fill in lower holes when used on a cleared line. You just feel dirty doing that, as you will with all the other power-up items. In both of these modes, do well enough and you get flipped to a fast paced color clearing bonus screen that has you putting preset minos in puzzles for big points.

Survival has you clearing as many lines as you can while incoming lines make their way toward the top. The game keeps count of your total time and line count. There’s also a computer battle mode that has you throwing lines at your virtual opponent. Hudson’s own Bomberman is the first opponent. The computer likes to throw curveballs your way, like flipping minos, or random individual blocks, or worse, bombs that tear up all your building work. You can do the same with items as you earn them, throwing a wrench in their gears by hitting X. Some items, gained by clearing lines, can also help you out, like the UFO that comes from space to suck up your bottom rows.  It may sound fun, but it’s a deal breaker to me, as the use of these items throws all of the game’s balance out the window. Skill no longer matters if there’s an item that will clear your board for you.

I enjoyed the party modes more than any of the game’s featured modes. In Party Mode you will do things like use minos like jigsaw pieces to build picture puzzles, or build an object by looking at its silhouette on the bottom screen. Modes like Tower Climber, where you’ll stack blocks against a cylindrical matrix, or Fit, where you’ll drop shapes into holes in the plane of the same shape to clear, will blow your mind if you’re still stuck in the 2D days. Your mind will be further blown when you realize you can use the circle pad to turn the matrix around in 3D. Woaaaah. 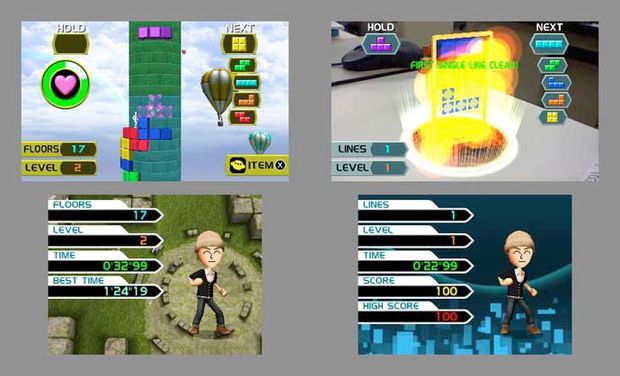 The two games in the AR mode are good only for wowing friends that haven’t seen the 3DS in action yet. AR Climber has you stacking tetriminos against a cylinder that is generated in your real-world playspace with augmented reality technology. You’ll work to guide a tiny character to the top of this cylinder by using your dropped blocks as steps. This game must be played on a surface you can walk fully around as you’ll have to run around it to see all the way around the cylinder. The AR Marathon mode is like standard Tetris, but on a smaller floating playspace that appears in your environment. Both of these modes will likely give you motion sickness if you move around at all, and with the AR Climber mode, you’ll have to. Forget turning the 3D slider up on either one of these unless you want to turn your brain to mush.

Tetris Axis does support many types of competitive play. Local Play requires another 3DS owner with a copy of the game, but there’s also download play support for up to eight players. Internet mode lets you battle a random online player through quick matches. Connection time was often slow, and it would often time out. Fun.

I liked the addition of dancing Miis and club-style classical music remixes, and the graphical presentation and 3D novelties were neat, but none of this really satisfied my craving to play some good ol’ Tetris. Somehow the standard-ish Marathon mode wasn’t doing it for me. Again, I appreciate that Hudson Soft was trying to do something new and different, but I find myself wanting to go back to Tetris DS after spending some time with Tetris Axis. I guess I’m old-fashioned that way.