What I’m about to say may seem hypocritical. About two months ago, I came to the defense of modern cartoons not just because of their maligned animation, but also because they’re for a different generation. I, a 23-year-old man, am not the target audience for cartoons aimed at children. I can appreciate certain cartoons, but I know for a fact that some cartoons are not designed for my tastes.

In that piece, I talked about how Teen Titans Go! was not for me, but I’m glad that children are able to enjoy it more than I do. I may not find it particularly entertaining, but at least kids could find some value in it. It’s only when a TV show or a movie crosses a certain line that I take an issue with it. When a piece of entertainment sends bad messages to children or thinks that they’re morons, it pisses me off. Kids should not be treated like idiots. Kids can be intelligent and deserve to be treated with respect.

Long story short, Teen Titans GO! to the Movies is a piece of sh*t that is easily one of the worst movies I’ve seen all year.

The best part of Teen Titans GO! to the Movies is a dream sequence where the Justice League is summoned in the style of “The Circle of Life” to celebrate how awesome Robin is. It lasts for about a minute and got me to actually laugh out loud at the theatre. Also, Shia Lebouf gets beaten to death, which made me happy just by principle.

The other 91 minutes are annoying as hell and represent the worst of Teen Titans GO!

Look, I get it. I get that it’s meant to be a stupid movie about the Teen Titans trying to get a movie, but its stupidity is actually painful to watch. Waffle jokes are made, the Titans rap stupid songs to sound awesome, and I couldn’t help but root for the bad guy because the heroes were just so unlikeable. Speaking of, Robin is not only the worst character in the movie but also the most obnoxious and narcissistic character I’ve ever seen in a kids movie. He’s selfish, only cares about himself, and doesn’t really earn any sympathy from the audience. He’s just a jerk that will sacrifice the rest of his friends for his own ego.

As for the rest of the Titans, they’re barely in the movie. For a movie about the Teen Titans trying to get their own movie, everyone who isn’t Robin is relegated to the sidelines. Even then, all of the heroes are morons that can barely function as individuals. All of the villains and even some of the heroes remark that the Titans are jokes that can’t be taken seriously, but the Titans just reinforce them time and time again. They are jokes and they are a laughing stock. It’s frankly embarrassing. When Nic Cage as Superman is a more dignified role, something has gone horribly wrong.

I know you’re all probably expecting me to rage like an old man saying that “Back in the day, the Teen Titans used to be about something!” By this point in time though, there’s nothing else to say about it. Fans of the original series that wanted to see a return to form should avoid this movie like the plague. It’ll only reinforce your viewpoints. I know that you may be tempted to see it because there’s a meta-joke in the trailer about how DC is making fun of Green Lantern, but it’s not worth it. Not at all.

The jokes could have redeemed the movie, but the movie somehow finds a way to kill each and every joke in the same way. It’ll start out like this: a weird, funny joke will pop up that would get me to laugh for a second. But then the joke won’t leave. It’ll stay on screen for a few seconds. Then the movie will draw complete attention to the joke, almost as if it’s saying, “Laugh at our joke! We made a joke! Look at our joke!” By that point, we’ve already had a memorial service for the joke and we’re preparing the funeral arrangements for the next one. 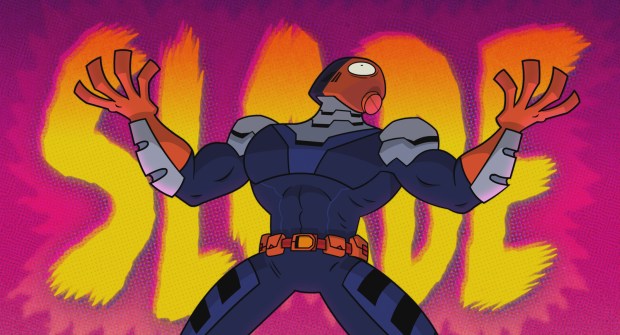 And then there’s Slade. Will Arnett is a funny comedian. I like a lot of his stuff and he’s perfect in The Lego Batman Movie and even better in Bojack Horseman. But Slade is written terribly, with most of his jokes reliant on stream-of-consciousness humor that just feels like someone let Will Arnett ramble for a few minutes and stuck it in the movie. I was never expecting Teen Titans level of badass from Slade, but the only thing that he did that was worthwhile was point out every flaw about the Teen Titans. I would have loved that, but then he goes ahead and does some absolutely stupid jokes that even a toddler wouldn’t find funny.

How do I know? Because the kids in my theatre were dead silent. They weren’t laughing at any of the jokes. They were laughing at the beginning when the Titans were rapping about how zany and waaaaaaaacky they were, but once the charm of it wore off, they were done. I can’t help but think that the kids were realizing that the only reason they thought the show was funny was that each episode was 11 minutes long, but the movie is nine times that.

Frankly, Teen Titans GO! to the Movies is exhausting. It’s loud but doesn’t say anything. It just makes random noises with bright colors for an hour and a half. I was hanging with a friend last night watching Fear and Loathing in Las Vegas and watching that movie was less of a bad trip than TTG. Fans of the show may enjoy it, but you have to be ready to deal with 90 minutes of the most annoying kind of humor on the face of the Earth. By the time the movie ends, every character is cheering for the credits to roll. If Superman is demanding for the movie to end, END. THE. MOVIE.

I know that I’m going to say the forbidden name, but Teen Titans GO! to the Movies deserves to be in the same level of hell as The Emoji Movie. It’s not as insidious as that hellspawn, but this movie believes outright that your kids are morons and will watch anything with fart jokes and goofy faces. Kids deserve better entertainment than this and fuck Teen Titans GO! to the Movies for existing in the first place.