[This post originally ran as impressions on the open beta and is now updated to reflect the full release, which came two weeks later.]

Call of Duty has dumbed down the modern shooter to being about planting bombs, capturing points, and getting headshots. In contrast, Tactical Intervention is a breath of fresh air and feels evolutionary in its ideas — one could say next-gen, but it’d be hard not to laugh when looking at its budget production values. Dog barks sound like Doom imps and the visuals somehow look worse than anything in Half-Life 2, despite having all the niceties that have come to the Source engine since ’04.

Before Call of Duty fever swept the nation, I loved online first-person shooters for the chaos that car combat and hostage encounters can bring. I’ll never forget surfing on an airplane wing in Battlefield 1942 or using hostages as human shields in a pitch dark cs_mansion in Counter-Strike.

Tactical Intervention brings back the good memories before FPS were marketable to the mainstream, along with reminders that mods like Counter-Strike weren’t born with that layer of polish later achieved.

Tactical Intervention is everything I love and hate about the early days of Counter-Strike, before it became a Valve brand and major entity in the eSports realm. It is completely nuts and busted, but I can’t bring myself to stop playing it, during its open beta, because it’s fun. It’s the type of fun Minh ‘Gooseman’ Le, co-creator of Counter-Strike who infamously left Valve to pursue his own vision of a follow-up, is known for. But now that I spent more time with the full release, the lack of depth and polish is leaving me wanting something more.

In a recent interview with Joystiq, Le stated his main reason for leaving Valve was that he favored fun design over technical stability which clashed with Valve’s SOP. This ideology is written all over the Tactical Intervention. At times, it’s some of the most fun I’ve had online since the release of Battlefield 3, but with the code and level design held together with duct tape and rubberbands, the fun didn’t last as long as I’d like. Now that we have the full release to evaluate, I am further concerned with how developer Fix Korea can ever repair the faulty code, dress up the ugly UI, and find a F2P approach that isn’t a nuisance.

TI runs on Source engine so some of the similarities are obvious: font choice, general aesthetics, HUD elements borrowed from other Valve releases (Left 4 Dead), etc. Upon booting up TI, its CS roots shouldn’t be lost on veterans but a lot has changed. In the age of Call of Duty, CS‘s pace of action crawls with all the fury of a snails’ velocity. Instead of making a paper crown replica of Activision’s behemoth, Le and developer FIX Korea have found their own unique ways of making tactical combat exciting again.

As mentioned at the top of this review, opportunities for action are fairly straightforward these days. TI changes this by introducing a variety of game mechanics; some feel like a stroke of genius, while others are superfluous nonsense and poorly implemented. TI‘s mission mode, in the open beta, is like a beefed up hostage match in CS, except maps are half the size and hostages operate in a completely different way then you may be accustomed to. Almost but not quite like Condition Zero, hostages are unruly NPCs that hilariously FREAK THE FUCK OUT! As a terrorist, you’ll need to contain them by slapping them with the back of your pistol and herding them into a corner. Watching teammates perform this role can be hilarious at times, disturbing at others. 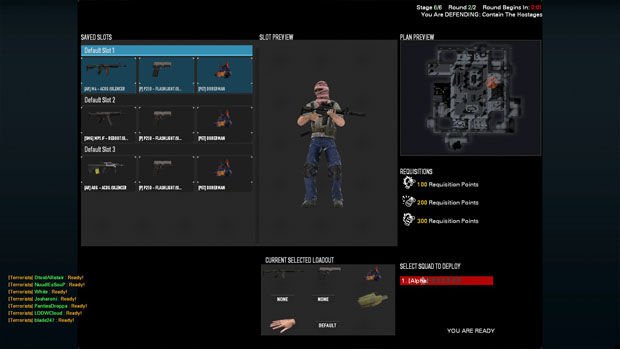 Instead of guiding hostages to an exit, the opposing team only needs to hold the action button on them until they are rescued. This is a very quick action which makes the low round timer (~2 minutes) reasonable. To further complicate things, mission mode alternates between two playstyles: One where a team must contain hostages in a defined area (exiting it means sniper fire/quick death), and another where hostages are points to be claimed, by both teams, in the middle of a map. Both of these can be fun when teams know what they are doing (i.e. not ending a match by killing hostages).

The real thrill of TI comes from the crazy acts you can perform with and without hostages. You can pick up propane tanks, throw them, fire a bullet, and watch it go spiraling across a map. You can rappel down an elevator shaft, roll across to cover, jump out a window like John McClane, and reenter a floor below via an open window you shot out. You can grab a hostage, use him or her as a human shield, gun down two enemies, kick the hostage into the third, and exit with a flashbang. You can hire a fat ass doberman who does your bidding long after you died in a match. All of these things are awesome when they work. All of these things rarely work, in this beta, making me wonder why release the game so … soon. 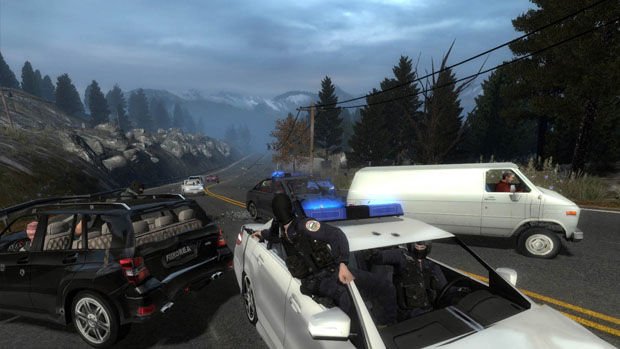 From the aiming to the many graphical glitches, TI is a mess of a game in its current state. The full release contains a meager five mission maps, most of which are utterly forgettable. I’m also bothered by the free-to-play elements that require players to constantly repurchase weapons, which expire over a couple days (or months, if you pay more). The open beta gifted players with more money than they know what to do with, so having to unlock guns and hire dogs in the shop wasn’t much of a fuss, at first. But now, it’s an unncessary bother that keeps me from wanting to revisit the game. I want to jump in and have fun, and the thought of needing to constantly buy, equip, and customize loadouts each week is a bummer. It doesn’t help that TI‘s menus look and function like a botched weekend development attempt.

Last but not least, I must mention mis_highway. I’m making a snap judgement but: This map is an instant classic that needs to be put in the hall of fame ASAP and merits a weekend spent with TI on its own. Highway, unlike the other missions, revolves around driving a computer controlled VIP to a helicopter on the other side of the map. Each team has three cars with drivers that can wield a pistol or SMG while steering. Passengers can lean outside windows and unload at other cars. Every time I play, chaos and laughter ensues until the map changes. 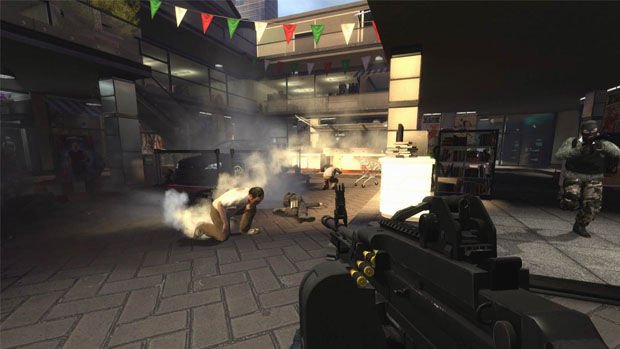 Some rounds will offer a mad rush to the VIP drop off, where the real fire fight will occur. Other rounds will revolve around a planned blockade that brings an emergent Heat-esque fire fight. Rolling between cars, picking up the briefcase from the disposed VIP, and driving like a mad man to the helicopter pick-up is amazing. Some day soon, I have no doubt I will enter TI‘s lobby and find the majority of servers are mis_highway-only servers. If TI had more maps like this, I’d be more forgiving of its many shortcomings.

Though mis_highway feels like a random aside, it perfectly encapsulates TI. While Valve turned Le’s baby into a stagnant game for the sake of eSports, TI continues to design like a mad man who cares only about immediate enjoyment. Does it work? Who cares. Is it fun? YES! If only for a short while, but that’s more than many of CS and CoD‘s copycats can claim.

For those of us who remember the days of hostages falling down canyons and giant APCs glitching through walls in Counter-Strike, Le has made a game for you. It’s unfortunate then that the game is buried under a myriad of problems, from dated, ugly presentation to shooting that feels clumsy. With how Le has talked up the game over the years, it’s not a surprise that it’s so ambitious. And with the many delays and last minute open beta, it shouldn’t be a surprise that it’s a total mess.