Find out what happens after the 75th floor

Despite how you may feel about the polarizing second arc of Sword Art Online, fans generally have nothing but good things to say about the first arc. It managed to nail a lot of aspects of MMO culture, along with marrying the aspect of a virtual game of death into an interesting narrative full of mostly likable characters.

Sword Art Online: Hollow Fragment manages to re-tell the end of the arc in videogame form, and even though it isn’t the best RPG on the Vita, it’s pretty much a must-have for hardcore fans of the series who always wondered what lurked beyond the 75th floor of SAO. 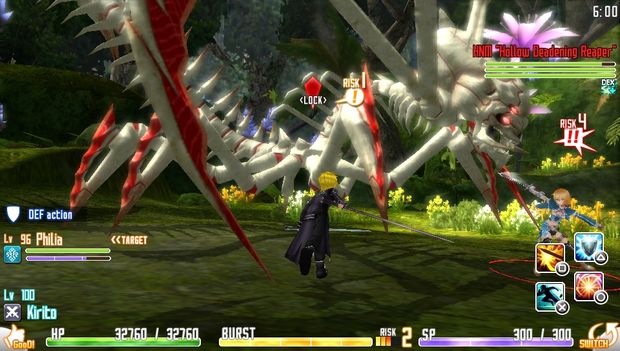 So what is Hollow Fragment? Well, in Japan, there was Sword Art Online: Infinity Moment on PSP. Hollow Fragment is basically a semi-sequel that brings the upgrades the original visuals and adds more content, such as a new storyline and zone called “The Hollow Area”. In other words, you’re going to be up to speed if this is your first SAO game.

Hollow Fragment‘s story takes place in the first half the Sword Art Online anime’s plot, but changes the narrative drastically from a key point. In the series, the initial story ends at the 75th level of “Aincrad”, the 100-floor main dungeon, after the players defeat the “Skull Reaper” boss, solve the “mystery” of SAO, and move on to a new arc. In Hollow Fragment, players must continue all the way to the 100th floor to truly find out what happened.

If you aren’t a fan of the show, the game does a decent job of catching you up to what’s happening in the world: Players are locked into a virtual reality MMO, with their bodies essentially comatose in real life until they “beat” the game. But you really need to buy into the characters to enjoy yourself. Quite simply, the story immediately takes a backseat in favor of grinding and combat as you work your way towards clearing the game, and individual interactions are paramount. 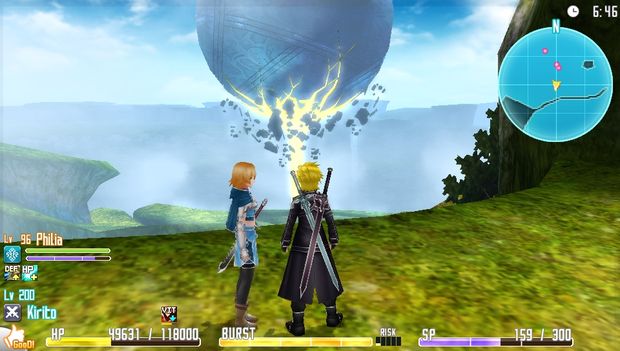 There’s going to be fanservice, tropes, and cutesy conversations just like the show. In short, you aren’t going to like everyone, and since the game packs in 100 companions (as well as characters never seen before on the first two arcs of the show like Sinon), you have a lot to sift through. Having said that, the Japanese voices are great, I generally like the characters at hand, and the hand-drawn models during conversations look straight out of the anime — on the Vita’s OLED, it looks incredibly crisp. If you find yourself loathing a certain conversation though you can use the handy fast-forward button (L).

On your journey from floors 76-100, you’ll have access to one town — Arc Sofia. I like the “one city” concept in theory, but the hub itself isn’t all that vibrant visually, or lively in terms of gameplay. Since the game is technically offline, you’ll have to find NPCs by way of your “friends list,” and track them down. You also have the option to enter the “Hollow” anytime you want, and complete a separate storyline with newcomer Philia — which definitely breaks up the monotony of Arc Sofia since the Hollow is more of an open world compared to Aincrad’s floor-by-floor structured approach.

You have the option of just playing as the main character of the anime (Kirito), or changing your avatar’s name and physical appearance using a limited character creation screen. To be clear though, you’ll still be taking the place of Kirito’s character as he was in that part of the show — level 100 and all, so you’ll have to do a bit of digging into his skillset to play catch-up. 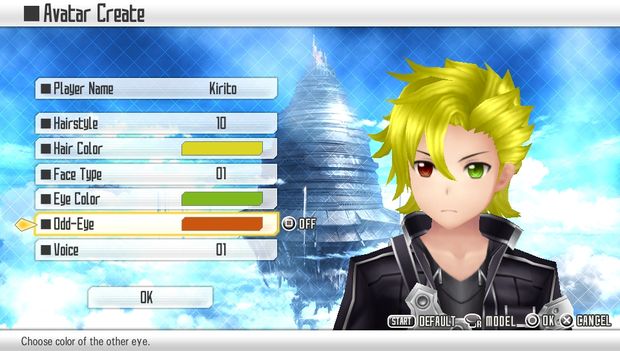 The game’s combat is what I’d call “sufficient, but fun.” It’s mostly a slasher, where you occasionally time attacks in a quasi-rhythmic fashion, dodge when enemies are telegraphing their attacks, and hit a few “combo” attacks with companions. It’s kind of like Phantasy Star Online‘s combat but more forgiving, and with a few more abilities to juggle.

The combo attacks are actually enjoyable, as your partner may suggest certain tactics to you from time to time, granting an attack bonus if you fulfill their request. Likewise, you can give them words of encouragement with the d-pad and raise your stats temporarily. It’s all very simplistic, but the bright visual style and attack animations help add to the allure of beating up tons of enemies. It’s also very true to the show, even adding nuances like the “last hit bonus,” where you’re granting a bonus item if you finish off a boss.

Keep in mind though that Hollow Fragment does have a superficial amount of depth. Although your characters do have access to a number of abilities and strategies, most enemies and bosses can be whittled down by sheer force of will with the same tactics. There is a level of customization to help bolster your fun though. Although Kirito’s specialty is dual wielding, there are 10 weapon types in all that you can switch to at will to suit your playstyle. 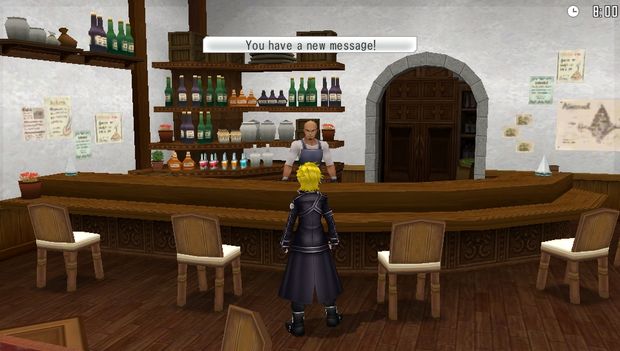 Just keep in mind that the game doesn’t really get that difficult until level 85. Most of your enjoyment is going to be via role play, where you buy into the game’s world, characters, and lore. Again, it helps if you come into the game liking the show so that you can enjoy the ride. You’ll need that excitement if you want to make it through the roughly 50+ hour tale, because there’s lots of grinding involved as you complete typical MMO kill quests to unlock floors and make your way to the end.

Things like dating minigames, conversations between NPCs, and other sideshows ultimately help distract you from the dungeon-crawling nature of the game. There’s also a New Game+ to keep you going — so if you’re looking for a lengthy RPG, this is it. Sadly, the only multiplayer is a small ad-hoc (local) mode where you can adventure with friends in a limited fashion.

Sword Art Online: Hollow Fragment is ultimately a base-level RPG, but if you enjoy the show it’s definitely worth checking out. It’s very close tonally to the anime and really feels like a natural extension of the show inside and out. Just don’t expect a whole lot in terms of gameplay variety.