Super Stardust has been around for a long time — since 1994, in fact. Although most people know the franchise from Super Stardust HD, it was originally on the Amiga platform before it hit the big-time. Now developer Housemarque is back yet again with Ultra, which isn’t really a new entry so much as a fresh coat of paint for the PlayStation 4.

Hardcore fans may feel duped by this not-so-sequel iteration, but newcomers who have long been curious about Stardust will want to jump in right with Ultra. 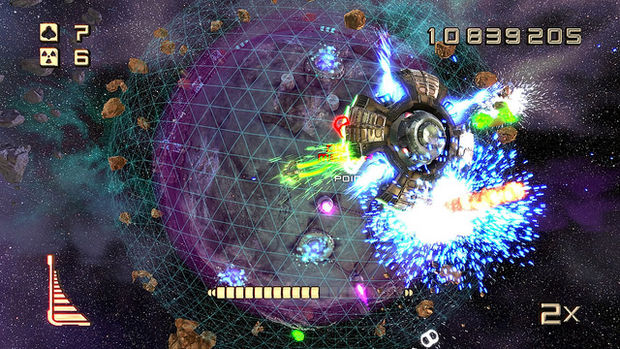 Sony has been somewhat vague as to what Ultra actually is, but the reality is fairly easy to explain. It’s a brand new game (without the option to update or Cross-Buy for past owners) that feels more like current-generation update than a true sequel.

If you’ve never played a Stardust game before, it’s commonly described as a twin-stick shooter that’s a cross between Asteroids and Robotron, which is as apt as it gets. You’ll pilot a ship across a spherical zone, blasting away at enemies to wrack up points. There are obviously intricacies that are made known the more you play it (certain weapon types smash certain asteroids more efficiently), but for the most part it’s an arcade-centric shooter that looks pretty.

Enemy waves come quickly but not in an overwhelming manner, putting this smack in the middle of a true bullet-hell shooter and a casual title. Housemarque really nails that feel throughout the entire game, to the point where you don’t ever feel like deaths are cheap, but you also feel like you’ve earned your high score.

There are nine modes in total, all of which ultimately feel the same but are still fun because of how solid the core shooting mechanics are. While Arcade, Endless, and Survival are self-explanatory, modes like Bomber and Impact help mix things up with forced handicaps, only giving the player the power to use bombs or a boost attack respectively. Blockade is basically Snake, leaving a trail behind you as you move. As you can probably tell, aside from Blockade it’s not very riveting stuff once you’ve saturated all you can from Arcade.

“Interactive Streaming” however is a new mode that’s more novel than the rest. You can easily broadcast a game on the PS4, and lets other people “vote” on what happens — good or bad. I had a fun time both watching and playing this mode since it feels like a natural evolution of the series, and takes advantage of new hardware in a fun way. Social features have a way of creeping up on modern games too often, but getting more people to share their experiences across Sony’s network is a great thing.

At this point though my enjoyment of the Stardust series as a whole is starting to dull a bit. Personally I prefer Housemarque’s other PS4 project Resogun both stylistically and mechanically, as Stardust can often feel boring with its same-looking spherical flow. Although the former employs a similar “endless” rail trick, it looks and feels like a living, breathing city on the brink of destruction as opposed to the same planet with minor hue adjustments. Still, Ultra is decidedly impressive running at 1080p and 60fps on the PS4 (with 3D if you have it). It’s the best its ever looked. 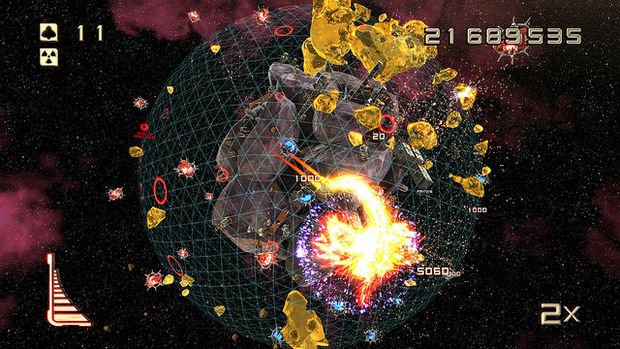 Multiplayer is a bit more fleshed out with local four player co-op that supports both same and split-screen co-op experiences, along with a host of competitive modes like Last Man Standing and deathmatch. The longevity of any Stardust game is going to come from solo high-score runs, but playing with a friend or three who also happen to enjoy shooters is a great way to pass the time. Sadly, the opportunity to add online play was missed yet again. Oh, there is also a small ship editor included but it’s very bare-bones — you can only shift around pre-existing parts, and it’s not nearly as featured as Resogun.

If you already own a prior entry and aren’t bonkers about the series, you can probably pass on Super Stardust Ultra in favor of something original like Geometry Wars 3, as very little is wholly new here. But if you’re the type of gamer who worked tirelessly in the past for a top Stardust score and can’t get enough, this is the smoothest package yet. While I may be slowing down with my love for the franchise in light of recent competition, the light isn’t entirely extinguished.