New kid on the blocks

It has become somewhat of a running joke that indie developers only ever make puzzle platformers, with famous titles like Braid, Limbo, and The Misadventures of P.B. Winterbottom on the list of the most successful independently developed games. Super Puzzle Platformer Deluxe may sound like it wants to join the ranks of those titles, but it actually takes the “puzzle” and the “platformer” in its moniker quite literally.

Rather than presenting the player with a series of mind-bending tasks, Super Puzzle Platformer Deluxe drops the player directly into an old-school falling-block puzzle, arming them with a laser pistol and a cape, and assigning only the following instructions: 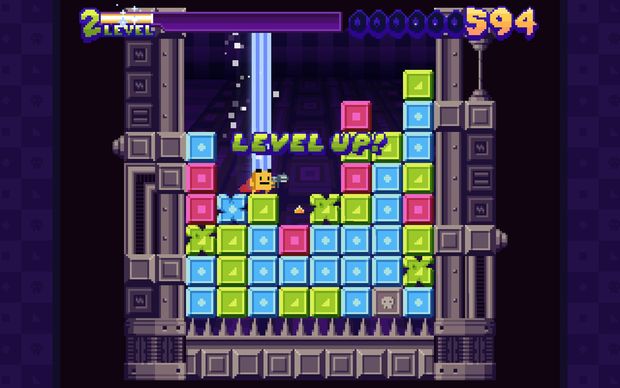 Super Puzzle Platformer Deluxe channels the essence of retro gaming in more ways than one. Immediately apparent are the functional pixel art and the rocking chiptune soundtrack, but past that, the gameplay hearkens back to a simpler time when the ultimate goal of a videogame was simply to obtain a high score.

It is perhaps a bit too vague at first, especially for those used to having tutorials. Super Puzzle Platformer Deluxe begins by dropping the cape-clad protagonist into a factory that looks suspiciously like a Tetris arena with spikes underneath it. Thrown straight into the action, the player is left to figure out the mechanics, but they are mostly straightfoward.

Blocks fall from above and the anthropomorphic block of cheddar can jump on them or shoot them. Destroying a single block awards one point and drops a chip that can be collected for another point. The kicker is that adjacent blocks of the same color take more shots to destroy, but award points with a square relationship, where two blocks give four points, three blocks give nine points, and so on. Additionally, after collecting a certain number of chips, the player levels up, which increases the power of his shots and adds a multiplier to the score.

While this is going on, traps will occasionally fall instead of blocks, introducing deadly implements that will immediately end a run when touched. These include lasers, chainsaws, spikes, explosives, and even spinning beams of fire a la Super Mario Bros. 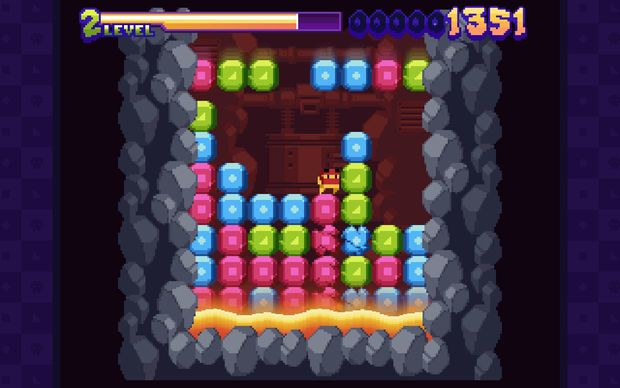 What results is an experience that is very true to the “puzzle” and the “platformer” in the title. Playing it as a pure platformer with only the intent to stay alive awards few points, while playing it as a pure puzzle game often leads to sticky situations with little space to maneuver. Ideal strategy involves a mixture of the two gameplay concepts, and what comes out are constant risk/reward decisions that need to be made quickly in order to be successful.

Every so often, a gem will drop from a destroyed block. These jewels are worth 100 points, but they also serve as the currency for progression. There are six levels to play on, but each one after the first must be unlocked by collecting a set number of gems on the previous level. Thankfully, this requirement is cumulative, so even those who aren’t able to collect many in one run can still experience all six levels with a little persistence.

The differences between the levels are more than just aesthetic. In addition to providing new scenery and music, each level has its own set of traps with which to contend. The variety in killing instruments definitely gives each level a distinct feel, and the feeling when encountering a new trap and handling it on the fly is particularly satisfying. 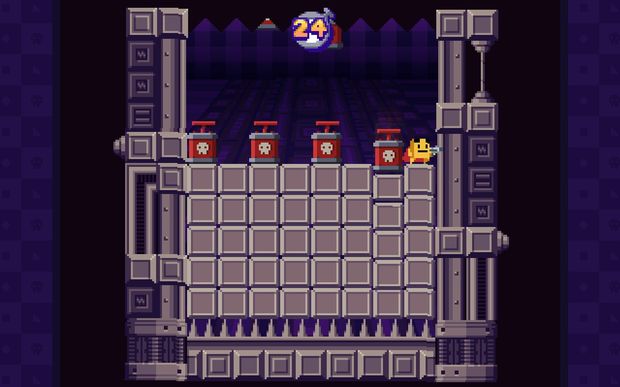 In addition to the default cape outfit, there are seven unlockable outfits for the player to choose, with each conferring its own stats for speed, jumping ability, and shot power. The cape is a good all-around outfit, and it lets the player fall more slowly for easier platforming. One of the later outfits features a rocket launcher, which deals high damage to blocks, but significantly reduces jump height. My personal favorite is the ninja outfit, which offers a double jump, giving the player high mobility at the cost of relatively weak throwing stars.

What is interesting is that while I certainly have a favorite, it would be remiss to say that there is a best outfit. I can imagine other players being successful with some of the other costumes, but there is definitely one that suits my play style the most. 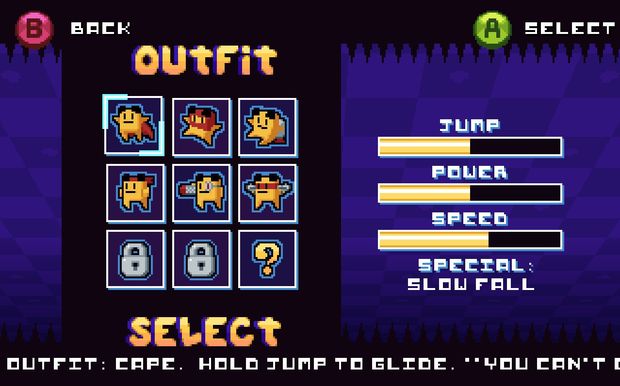 Graphically, Super Puzzle Platformer Deluxe is presentable. The pixel art is completely functional for the type of game that it is, but it isn’t the most breathtaking work out there. The soundtrack fares a bit better, with high-energy chiptunes that fit the pacing of the game well and just sound rad in general.

Aside from the somewhat uninspired graphics, there isn’t much to complain about with Super Puzzle Platformer Deluxe. However, although it takes a good, simple idea and executes on that idea well, it is not a truly great idea. After a few hours of dense entertainment, it is as easy to put down as it is to pick up. Where other games may grab hold of the psyche and threaten to never let go, Super Puzzle Platformer Deluxe is comfortable to be simple fun and nothing more.

Adult Swim is known for curating really memorable independently developed games, and in that regard it faltered a bit here. Super Puzzle Platformer Deluxe is a solid game that takes a good concept and runs with it without overstaying its welcome, but it isn’t likely to reach cult hit status like Robot Unicorn Attack. It takes some of the best elements from games released twenty years ago and leaves behind some of the more frustrating aspects of the old school. For gameplay purists, this is a gem to behold. For others, it is a fun, but ultimately forgettable game.