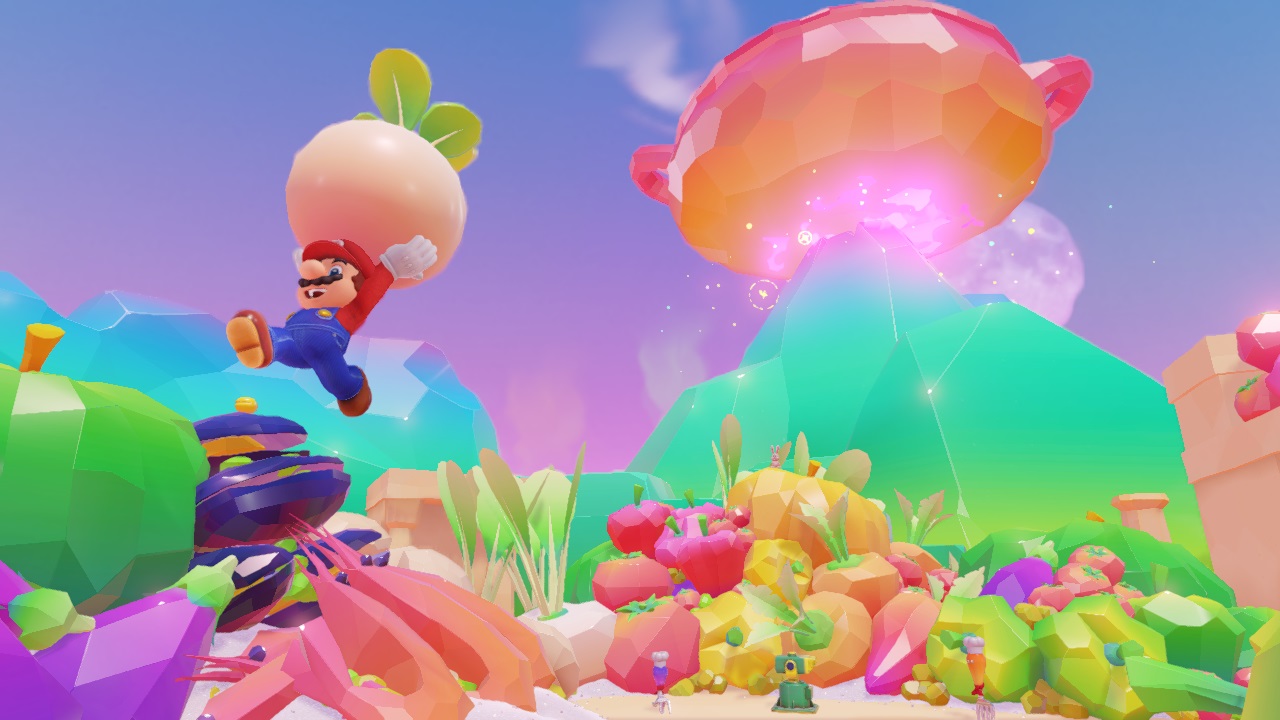 3D Marios have built up quite a reputation.

When Super Mario 64 catapulted onto the scene, the entire genre shook so hard that the ripples are still felt today. It’s that pedigree that allows people to erroneously put any given release on a pedestal, like it needs to be the biggest thing that year.

If there truly was a formula of some kind to judge what makes a great Mario, Super Mario Odyssey has earned its spot.

Odyssey does what any sandbox game should — give us a heap of areas that feel different and fun to run around in. Atlas entries make everything seem like a real adventure, while segmented and brief interludes set the scene of Bowser attempting to marry Princess Peach against her will.

No, the narrative yet again isn’t the draw, it’s the journey. What Odyssey truly nails is its ability to surprise you. The new rub is Cappy, a mysterious (and never fully explained) ghost hat that can possess (sorry, “capture”) enemies and objects. I’m talking your run-of-the-mill Goombas, Bullet Bills, and Hammer Bros. — yes, you can become them and wreak havoc on their brethren — or plain ol’ household objects like cacti. I found myself constantly looking for things to capture which, in turn, allows one to reach new heights or depths.

Sewn into the backbone of these galaxies, essentially, are traditional platforming sections, the aforementioned capturing, and 2D portions that are incredibly well restrained; insomuch as they’re not too saccharine or trying to shamelessly appeal to retro fanatics. With Mario’s locomotion at an all-time high (classic 64 concepts like triple-jumping and backflipping are back, coupled by a few new cap-related tricks), you won’t have any trouble getting to where you need to go.

You can do all this by way of holding two Joy-Con in your hands, which have specific waggle functionality that isn’t nearly as annoying as what Nintendo tried on the Wii. Or you can opt to forgo all of that together with a Pro Controller (with a few exceptions that are not needed to finish the game). It really is wonderful how Nintendo has shied away from forcing people into the motion world, going from mandatory roll-jumping in Donkey Kong Country returns into the myriad options on Wii U and now, the Switch.

Moons are the new Stars, the focal collectible, and there’s hundreds to find. You get more Moons, unlock more places, and get more Moons there. Bouncing around with fast travel and a level-select menu makes it all easy, as do the sandboxes themselves that are overflowing with Moons. At one point I found one, moved several feet, and found another. It can feel rote at times almost like it’s a collectathon, and I’m not huge on a few re-used boss fights (something Mario always does, see Boom Boom for proof of that), but if I ever felt even remotely felt bored I just swapped locales and kept playing.

If a lack of direction and permanency or weight is a problem, you’ll want to look elsewhere. Sometimes you’ll just feel so aimless, running around getting Moon after Moon not making much clear progress, as the game doesn’t hold your hand, just provides you with vague quests and hints on where to find your bounty. Narrative cutscene hits are around a minute each, and the game could easily work without them. All that, along with the new no-death system (now you just lose coins, your currency for buying most of the game’s items), are fine.

Really, games don’t need to provide concise breadcrumb trails or engaging stories, and Mario is proof of that. I spent an hour on a single Moon and didn’t get frustrated; fueled by my constant sense of wonder and the acquisition of roughly five more Moons on my quest to locate that one last collectible. That, and becoming number one on several Koopa Troopa footrace leaderboards (before the general public gets their hands on Odyssey of course).

As I worked my way into the daunting postgame (you need literal hundreds of Moons to unlock a secret zone, then the game asks you to casually collect over a hundred more), I was never really hung up on those things. I was too busy watching Mario and Cappy read together and listening to a character named “Uncle amiibo” that addresses you as “sport” like Jay Gatsby. Every world, even the bite-sized ones that you only briefly visit, have that same level of glamour.

Has there ever been a bad 3D Mario game? Many would reserve that honor for Super Mario Sunshine (my least favorite), but it’s a far cry from a failure. No, before shipping any iteration of its flagship franchise, Nintendo ensures that a proper level of care goes into its plumber, and that streak of quality still remains unbroken with Super Mario Odyssey.

[This review is based on a retail build of the game provided by the publisher. I collected 512 Moons for this assessment.]