One of the best Mario games of all time

Mario and I go way back. Although I had dabbled in a few Atari games when I was younger, Super Mario Bros. for the NES was my first real game that I sat down and played from start to finish. Since then, I’ve collected and played every main series Mario game, adding a steady stable of all time favorites to my list. Why am I telling you all this, you may ask?

Because I want you to know that I have a basis for comparison for the newly released Super Mario 3D World for the Wii U — so when I say it’s one of the greatest Mario games ever made, I mean it.

It’s one of the greatest Mario games ever made. 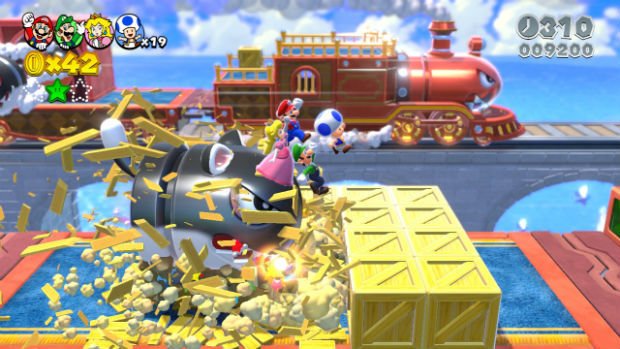 Why is 3D World so good? Because it’s essentially a complete refinement of everything that was great about 3D Land, a game that I happen to think is criminally underrated. 3D World is pretty much a joy ride from start to finish — and that “start” is as quick as ever. Bowser is at it once again, as he seems to be maliciously bottling up fairies from another land — wait, he isn’t kidnapping Peach this time?

Yep, Peach is part of the action now, along with her pals Mario, Luigi, and Toad — who operate similarly to their Mario 2 counterparts (Luigi jumps high, Peach floats). You have complete freedom over who you play as in 3D World, as even player one can choose between the lot without being relegated to a forced Mario pick. Before each level begins you can pick a random character, which has a cool arcade-y feel to it.

The first major new mechanic that you’ll experience in the first few seconds of the game is the Cat Suit. It sounds absurd, but there’s no other way for me to describe this power-up in terms of its impact on the franchise than “groundbreaking.” In fact, it’s my personal favorite Mario power since Galaxy 2′s Cloud Suit, mostly due to the fact that it adds a level of technicality to 3D World that hasn’t really been present prior to this entry.

It sounds ridiculous, but with the ability to climb walls, pounce, and use an in-air dive attack, a lot of doors open up platforming-wise that weren’t there before. When combined with Peach’s hover move, you can perform crazy tricks like hover-cancels into scratches, then into a perfectly aimed dive bomb to clear massive gaps. It’s almost like air-dashing in a fighting game — it’s that fun to experiment with.

There’s a whole lot more to mess around with than powers of the feline variety, as the Tanooki suit is back, as are Boomerang Flowers, Fire Flowers, Mega Mushrooms, Propeller Boxes, and some newcomers — the Double Cherry and the Cannon Box. You can also ride an adorable dragon in the style of the penguins from Mario 64 (complete with the same music!), kick explosive soccer balls, and even ride around in Kuribo’s Ice Skate!

But while all of these gameplay mechanics are special in their own way, I feel like the Double Cherry needs a special mention. The concept is simple — pick it up, and your character is cloned, allowing you to control two characters. But here’s the twist — it clones your character based on your power-up, and you can keep grabbing more Cherries to keep making clones. 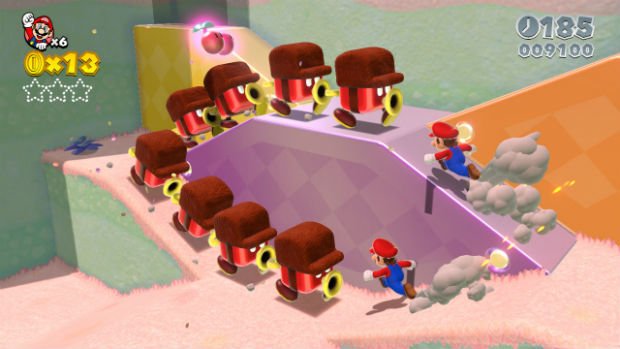 Where it gets crazy is when you have five Mario Cats running around in tandem, attempting to coordinate them all into a special area to grab a secret star. Like I touched on with the cat suit, Nintendo really went above and beyond in terms of the technical mechanics required to make this happen, and have it all make sense within the confines of each individual level. Since every stage is designed with these power-ups in mind, with the right amount of practice pulling off perfect jumps will give you a sense of accomplishment. Nintendo really outdid themselves with the power-ups here.

But the main factor that makes 3D World so special is the sheer amount of variety and surprises the game throws at you. Like the Galaxy series, concepts never overstay their welcome, and are often used for one level only to prevent them going getting stale. One of the biggest advancements are the clear pipes — pneumatic contraptions that propel players forward, allowing for course correction throughout the tube network. These often function as gameplay devices, but they can also purely serve as a cinematic way to show off the game’s world, with chaos and havoc happening around the tube. There’s a ton of new enemies as well that help keep things fresh, like the adorable marching wind-up box soldiers that scatter and flip out when one in their ranks is killed

Even the world map has its own personality, as it allows for a small amount of free roaming, without forcing you to go from point A to B on a track. Then you add in all of the obstacle course relays, and the Captain Toad levels — which are basically Pushmo style puzzles that require you to rotate the camera to collect stars. Unlike the SNES and Wii releases of Mario All-Stars, which were basically just ROM collections, 3D World is a true “All-Stars” tribute, with nods to Mario 1-3, the original Mario Kart (one of my favorite levels), and many more. 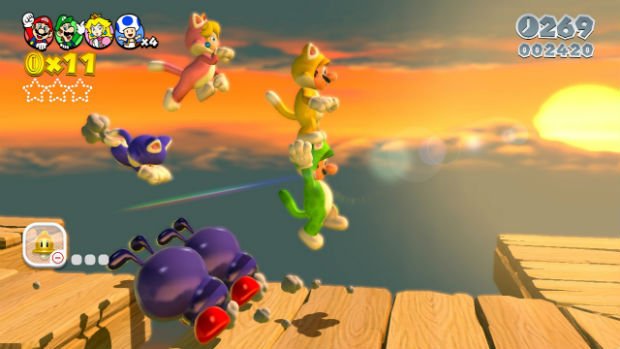 The only downfall of the design is the selection of boss fights — or should I say, the lack of variety within the mini-boss stable. Although major bosses are a far cry from re-hashes (I love the fancy snake “Hisstocrat”), occasionally 3D World will throw the creatively bankrupt Boom Boom encounter at you, seemingly as a placeholder. As always though these fights are quick and easy, allowing you to get back to business as soon as possible. Then you have the “gated progress” system that can be an annoyance for those who don’t feel like hunting down stars — a system which forces you to collect a certain amount of collectibles before playing certain worlds. It’s not a dealbreaker for sure, but it feels like an outdated system in an otherwise fast-paced game.

But you won’t be angry for too long, as 3D World‘s visuals are incredibly sharp, and it feels like Nintendo is finally getting the hang of working with HD hardware. Lest you think this is just an upscaled rendition of 3D Land, you are kidding yourself — this game is gorgeous from start to finish, and the colors really pop on just about any capable screen.

There’s a ton of care that went into the visuals, from visible cloud particles, to insane details like knocking snow off trees. What I love most about the style is that it’s not afraid to show off, but it can also get endearing and minimal as well. Pretty much all of the character artwork and icons are either retro themed or vibrant, and give the game a ton of character even when you’re not playing it. 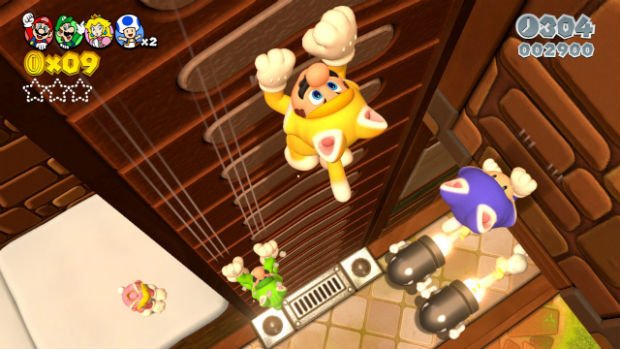 Like Mario 3D Land some of the character’s movesets lend themselves to the N64 era (backflips, long jumps, side twist jumps), but with a lot of refinement, like a stronger camera (which can now be fully rotated and manipulated), and tighter controls. Remote play is on by default, which you can use to either go solo sans TV, or as a “fifth” player to tap enemies and blocks. As always, I had little trouble using the GamePad (I used it the entire time), but pretty much every controller under the sun is supported in 3D World, including the Wii U Pro Controller and Wiimotes.

You’ll want to bust out those remotes too, because four player multiplayer is a hell of a lot of fun. Rather than the cramped 2D maps in New Super Mario Bros. Wii and U, the vast 3D environments lend themselves far better to a party session. Get ready for some friendly competition too, as the first place player also wears a crown of honor upon their head, which can be snatched by other players for bragging rights. Since it doesn’t actually mean anything, it’s not detrimental in any way, and adds some light tension to the proceedings — and since Mario, Luigi, Toad, and Peach are all different mechanically, every player has a unique gameplay element to play off of and master.

I don’t comment on game soundtracks often, but 3D World‘s score is one of the best OSTs I’ve ever heard — and I’m not just talking about the gaming industry. There are parts where it sounds like a classic Mario game, something completely new (like a straight-up funk track I would buy outright), or even a fully orchestrated Ghibli film. The sound effects are just as flawless, with an insane amount of detail going into minute happenings, like the crackling of torches or the scrunching of certain surfaces. In the future I hope every Mario game has an array of audio this impressive, because I don’t think I can go back. 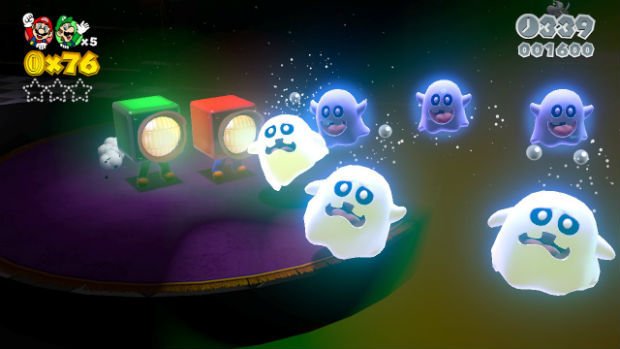 True to modern Mario form, each level features three stars to hunt down and collect, but 3D World adds another collectable to the mix — stamps. These actually have a point too, as they can be used when creating Miiverse messages — which 3D World fully supports. There’s also a friend list enabled “Ghost Mii” feature, unlocked by completing a level without losing a life, which adds a time trial ghost to each applicable stage. It might not make up for a lack of online play for some, but it’s a neat way to compete with your friends after you’ve found everything there is to offer in the campaign.

Hunting for every single star is time consuming enough, but what really puts 3D World over the edge for me is the inclusion of the original 1983 Arcade Mario Bros. (the one with the POW block) re-skinned to honor Mario’s brother for the Year of Luigi. It’s not only a two-player affair, but it also completely supports all of the Virtual Console functionality of the Wii U, and it’s a perfect retro extra to tie the package together. An extra fifth secret playable character is the cherry on top.