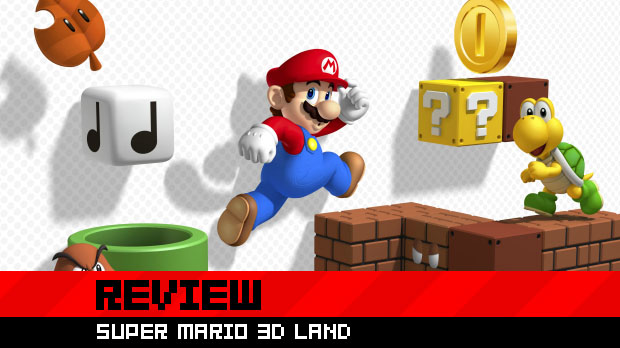 Always bet on Mario. It’s a given that Nintendo rarely fails when dealing with its mustachioed mascot, and there’s no denying that when a Nintendo system is in trouble, everybody’s favorite plumber can bail it out.

The 3DS is in need of some competitive games with Christmas around the corner, and once again Nintendo has gone to its pipe-delving hero, cap in hand, looking for help. That help has arrived in the form of Super Mario 3D Land, an all-new platforming adventure that shows off the 3DS’s capabilities and provides a game with real name value, just in time for the holiday season.

That’s what Mario does. He’s the fixer. 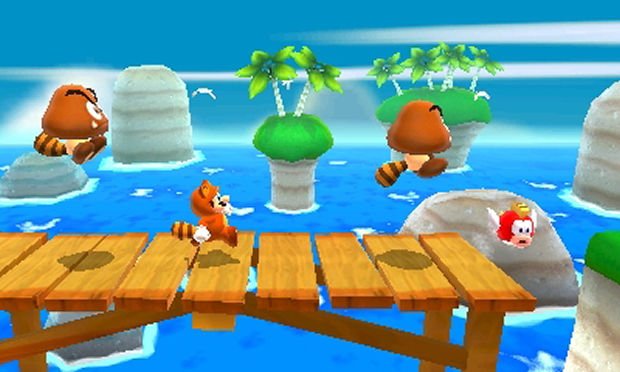 Super Mario 3D Land bears very little resemblance to the Super Mario Land games that once brought unique and weird ideas to the Game Boy. With its 3D perspective, it visually resembles titles like Mario 64 and Super Mario Galaxy, but in many ways, the game feels more like a spiritual successor to Super Mario Bros. 3 than any other established title.

It’s not just because the Tanooki Suit has made its welcome return. The game features many levels inspired by the NES classic, including a variety of airship boss stages in which players must duck and weave through familiar fire traps and Bullet Bill cannons. Furthermore, Boom Boom has returned as a recurring boss fight after debuting in Super Mario Bros. 3.

There’s an almost anachronistic flavor to Super Mario 3D Land, a game that bears the name of a Game Boy series and the visuals of modern games, but features gameplay strikingly similar to a classic NES title. Only Nintendo could pull off such a Frankenstein’s Monster of nostalgic platforming and make it work — for indeed Super Mario 3D Land works beautifully. 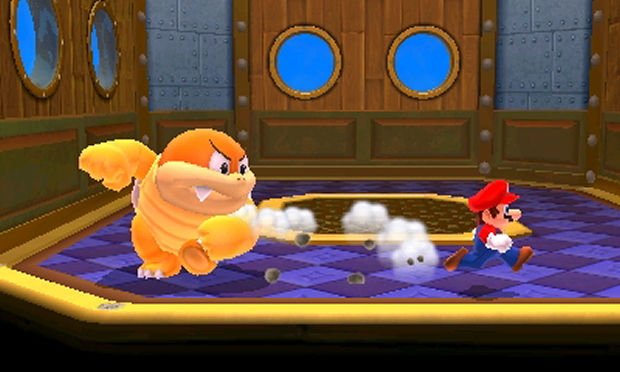 As always, the core of the game is familiar and simple. Mario must navigate a series of stages crammed full of unique traps and environmental puzzles, before grabbing a flag pole at the end. As mentioned, the Tanooki Suit has returned, allowing Mario to glide in the air with the aid of a raccoon tail in a manner just as endearing today as it was in 1988. Fire Mario is also back, and players are allowed to store up to one power-up on the touchscreen for use if they lose their currently equipped ability.

The old-school transformations are great fun, but there’s an all-new ability tossed into the mix for good measure. Boomerang Mario should be rather self-explanatory, gaining the ability to toss boomerangs that can destroy enemies or collect items. As well as giving Mario a cute Boomerang Bro costume, it’s a very useful item — not least for the fact that it can destroy enemy projectiles.

A handful of all-new enemies rounds out the fresh gameplay additions, including Tanooki Goombas and ink-spitting Piranha Plants that cover the camera in black gunk and make platforming more difficult. The fun is intermittently punctuated by cleverly mapped boss battles in which Mario must make it past Bowser’s fireballs and hit a Skull Switch to destroy his platform and drop him into lava — just like he did in the NES titles. 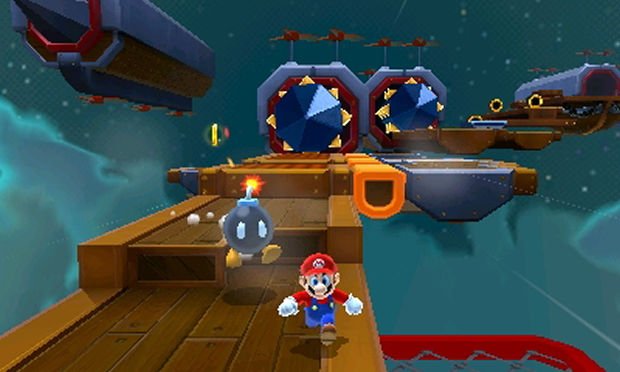 There are eight main worlds with at least five courses apiece, and they feature some amazing level design. Every single course plays differently from the last, and some of them are outright inspired. One stage, in which platforms made of wood pass through saw blades that constantly rearrange their shape, stands out in particular. That is just one example of the kind of inventive platforming seen in 3D Land, and it’s terrific to see Nintendo prove just how versatile the genre still is.

Some of this ingenuity has gone into exploiting the 3DS’s 3D abilities, with a few bonus stages turning platforms into optical illusions that can only be fathomed with 3D enabled. Stages that look flat and simple might have deceptively placed blocks with positions that cannot be determined on a 2D screen. These mandatory sections don’t last very long, but having 3D enabled at all times certainly helps navigate levels, since it provides a better sense of where best to jump and land.

One would also miss out on various stages designed simply to provide some gratifying 3D imagery. While I usually find it gauche to have 3D entertainment that shamelessly throws stuff at the camera, Nintendo must be complimented on doing it in a way that amuses and never intrudes on the gameplay itself. If Nintendo’s great at one thing, it’s in forcing a gimmick down our throats so well that it doesn’t feel forced at all. In Super Mario 3D Land, the 3D is undoubtedly a complement, not a detraction. The added depth makes platforming more intuitive, and the visual effects are simply fun to watch. 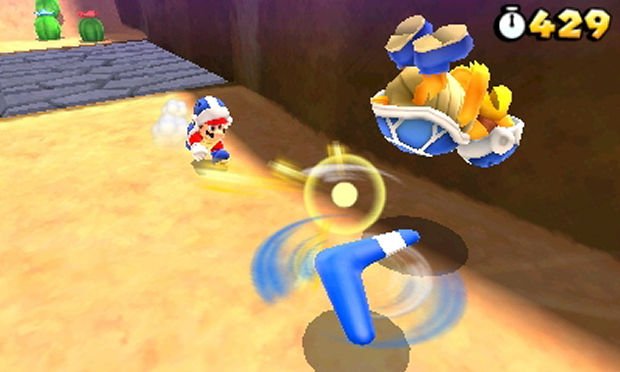 Despite having eight worlds plus eight special worlds with a more satisfying difficulty bump, Super Mario 3D Land is still a rather short game, and many players will also feel much of it can be too easy. There’s definite replay to be had in collecting special golden coins hidden throughout the level and some stages are just too fun to play merely once, but this definitely isn’t the most epic of Mario games. And due to Nintendo’s “No Child Left Behind” mentality, it’s also impossible to fail. If you die enough times, the game provides an invincible Tanooki Suit that lasts for the entire level. This can be ignored by those wanting a challenge, but some players may feel a little patronized at having Nintendo try to hold their hand. As someone who loves Kirby, I’ve certainly no right to complain about it.

The biggest issue with Super Mario 3D Land is that, as fun as it is, it feels more like the beginning of something more rather than a full experience. It seems like a mere taste of what Nintendo can do — an admittedly delicious taste, but one that still leaves a bit of a gap once finished. It feels like it was prepared to tantalize 3DS owners without giving them lasting satisfaction, to demonstrate that good things are in the handheld’s future and that more games like this will come if they stay loyal. I would not go so far as to call the game a tech demo, but it certainly acts like a whirlwind tour of Mario’s new 3D world, rather than a full vacation. 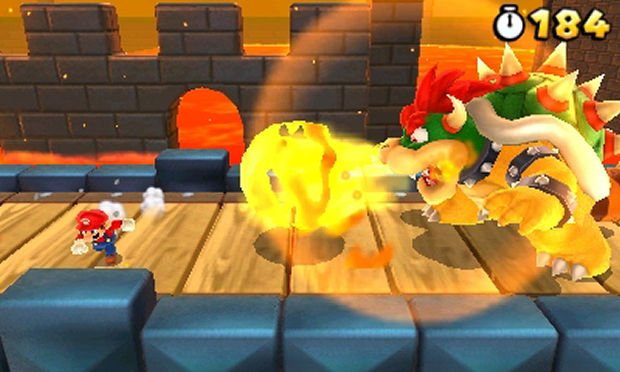 Nevertheless, Super Mario 3D Land is a great little game that pretty much every 3DS owner should invest in. While it’s nowhere near as intricately challenging as the old scrollers from which it draws inspiration. and it lacks the ambitious scale of Super Mario Galaxy, it is still packed with innovative gameplay and that unmistakable Mario charm. Its brevity and ease will be an issue for staunchly “hardcore” players, but it’s ultimately too much fun for it to be a dealbreaker.

3D Land is a game in which Nintendo shows other developers how they’ve been doing it wrong since the 3DS launched, and provides a template from which future games ought to be built. Hopefully this is the beginning of a library of fine 3DS games that proves the system has got what it takes to succeed.