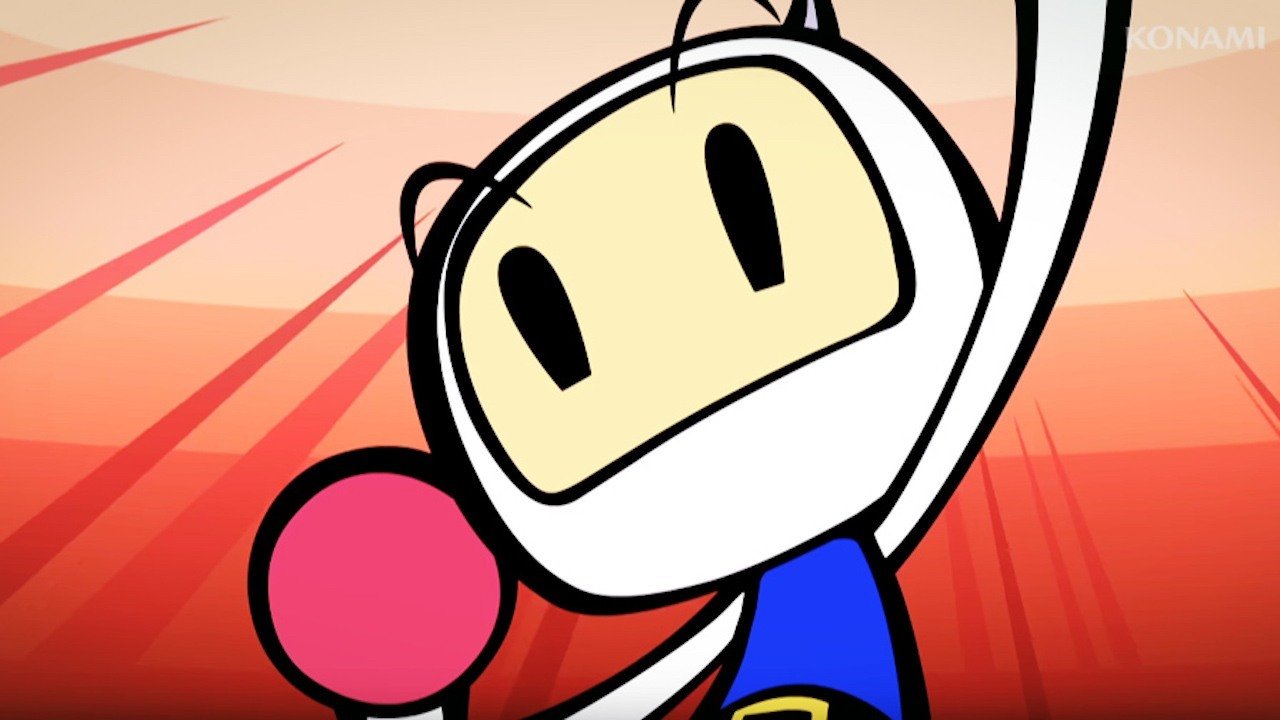 I was able to witness the rise and fall of Bomberman with my own eyes. It was one of the first games I ever played on the NES, and when developer Hudson Soft died in 2012, I poured one out for the once-great franchise. For six long years after Bomberman Live: Battlefest hit XBLA, there was complete radio silence.

But now we have Super Bomberman R, headlining a brand new console launch, no less. Bomberman‘s Nintendo homecoming might not be as explosive as a lot of us hoped, but it gets the job done if you want to entertain up to eight people on a Friday night. 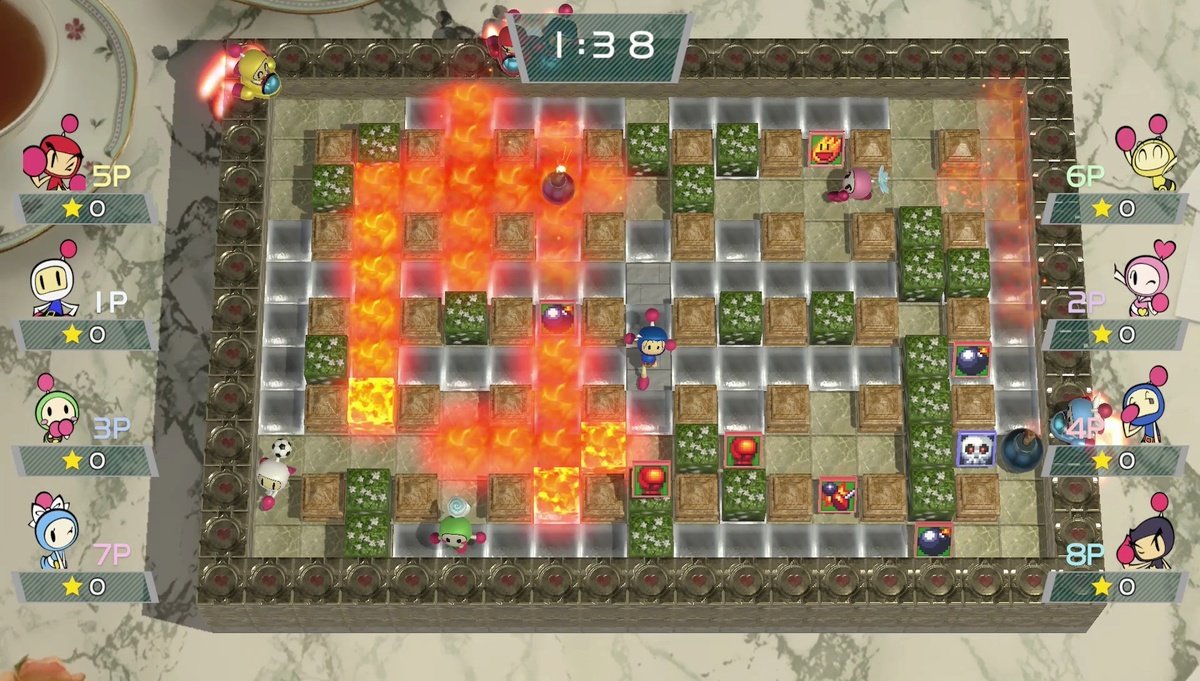 Before you get too excited, keep your expectations in check — it’s Bomberman. What I mean by that is there’s nothing here you haven’t seen before, so if you’re just going to be checking in solo, it probably isn’t going to be worth your time. Like many party games at heart, you’re going to want to wrangle up some buddies for this one.

With that out of the way, the story mode isn’t too shabby, just exceedingly average. Its 50 levels go by really fast, and the weird cartoon sequences are so short that you barely even notice them. Said cartoons are very cute little transitions and a nice re-introduction to some old, classic characters, but they’re basically just small animations placed on backdrops — a lot more effort could have went into them, and the English dub, for that matter.

Although I wish there were more to it, it’s not just about killing enemies (which range from dull to super emotive, especially after you blow them up). Gadgets and hazards like magnets that pull your bombs come up every few stages or so, as well as new primary objectives like hitting switches, collecting keys, or rescuing NPCs. By the seventh level arenas start spanning multiple screens with a cool little zoom effect, and can get really taxing even on normal mode (there’s three difficulty settings). Two-player co-op (with drop-in!) makes the campaign even more fun, but I find myself wishing there was a little more to do outside of the 50 included levels, and the player count was boosted to four (it seems totally possible).

Again, it all zooms by quickly, maybe over the course of an hour if you have previous Bomberman experience. Bosses cap off every nine stages or so, and while their robot forms (which are basically mirror matches) are amazing, the big mechs that they transition into for their second phase aren’t quite as captivating. They’re mostly just lumbering, predictable fights that utilize the same two or three attack patterns over and over.

The main draw for most of you out there is probably multiplayer, and although Bomberman R doesn’t stand out above the cavalcade of XBLA and digital releases over the past 10 years, it works. There’s eight levels unlocked at the start with 12 more at the in-game shop, as well as settings for the number of rounds, time, start positions, pressure blocks (read: sudden death), skulls, or revenge carts (which allow players to get back into the game after losing a life).

Although it doesn’t feel in any way like it’s a Switch (or even Nintendo) exclusive, I did enjoy the multiplayer tablet mode, which supports up to four people while on the go on the same screen. Given that it’s Bomberman and doesn’t require a split-screen setup, it was easy enough to identify where my avatar was at any given time. I can see this being a pretty fun way to break up the monotony of waiting in line at a convention (the go-to for my group was passing around a Game Boy Advance with Advance Wars). 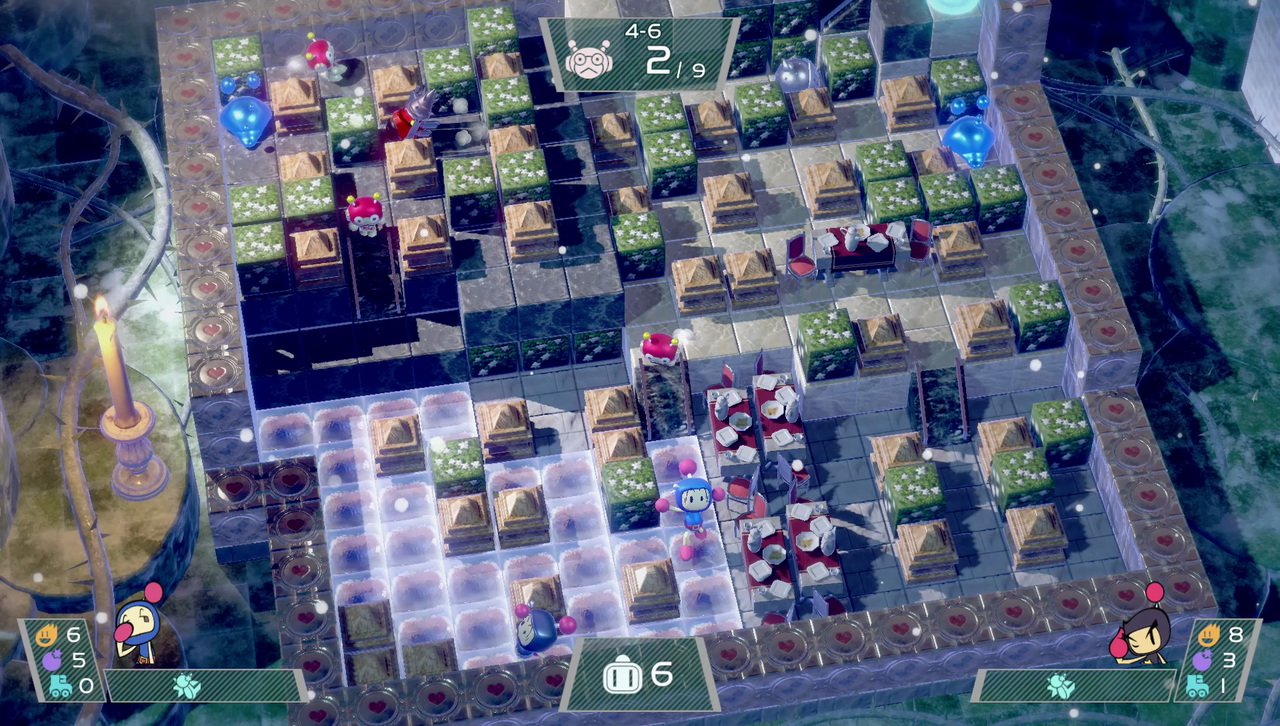 You can also battle with up to eight players on the same TV (yes, you can hook up eight controllers on a Switch), with concessions for LAN and online play. Sadly the latter was not available for testing at the time of this writing, but we’ll keep you updated on the situation whenever Nintendo flips the eShop switch. Even with that in mind, I’ve taken advantage of playing with bots many times already.

Speaking of the unlock system I so casually mentioned above, it takes in-game coins which are earned through gameplay, and doesn’t seem to push microtransactions. They’re mostly for costumes, characters, new levels, and continuing in the campaign, creating an old school incentive to keep playing. As time passes though it’s less “old school” and more of what people refer to as a gate (just look at the uproar when a fighting or rhythm game ships without everything unlocked). I don’t mind, especially for a relaxed game like Bomberman.

And that’s it. It’s Bomberman, man. It feels like an arcade game with a $50 price tag. The campaign isn’t as strong as it could be, but there’s enough here to keep the series going until Konami can muster up a little more for the next iteration.