I like doing dishes. There is catharsis in cleaning, in being able to exert tangible control over your surroundings. Many things are out of my control, but I can keep my kitchen tidy.

Sunset takes what most video games would take for an exhilarating setting — violent revolution in a fictional South American city — and strips from it delusions of grandeur, one-man-army problem solving, and guns, mostly, save for the rattling of bullets in the streets.

Baltimore-born engineering graduate Angela Burnes ends up housekeeper to a wealthy artist, Gabriel Ortega, who has connections to the ruling junta. Angela, on the other hand, is connected to the rebel force within the city led by her brother, David. This bit of magical realism plays out across a year of increasing turmoil in the capital, as Angela visits Ortega’s penthouse weekly while he is away to do tasks he has laid out within the hour before sunset. 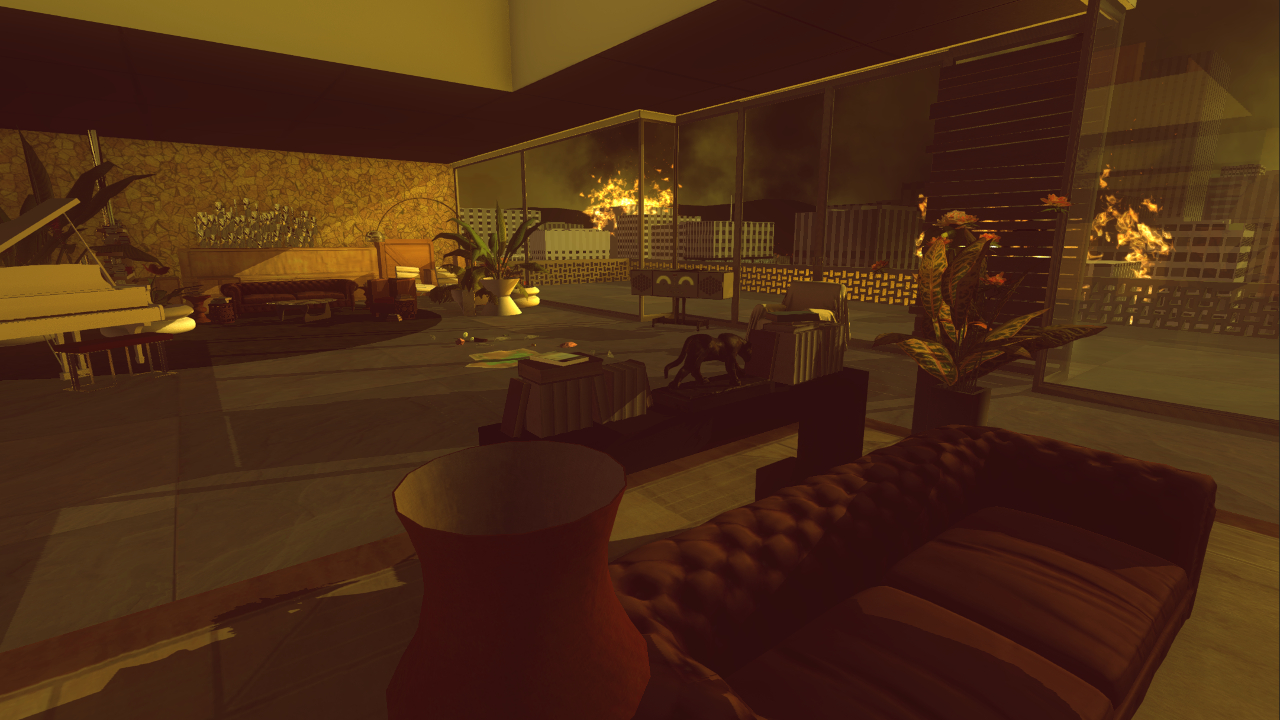 Ortega’s home starts out empty and austere as Angela’s early duties, directed by scribbled notes Ortega leaves, revolve around unpacking boxes and slowly making a home out of the place. This is done by wandering around to find what needs to be done (a pile of dirty dishes, papers in disarray) and clicking on it, at which point Sunset cuts to a shot of the city’s skyline and time ticks away on the clock until you’re returned to first-person control with the task at hand completed.

That chores are done in a cutaway feels like I’m being robbed of the physical connection to Ortega’s apartment. The apartment itself becomes an evolving character going from home, to art sanctuary, to rebellion plot house, but boiling housework down to a single click makes Angela feel more like Ortega’s executor than hired hand. This conflicts with the pitting of Angela against Ortega as far as class and social standing. With the same minimal effort he writes her a reminder to paint an accent wall, she does it. Just a click and time ticking off the clock, as if someone else is doing the work.

Angela and Ortega communicate almost solely through notes scattered throughout the house. Angela can respond with one of two canned responses: warm responses trend towards romance, cool leave the relationship professional. I found Ortega’s early flirtation off-putting and insulting, preferring to dutifully work, but things are complicated as the city becomes more volatile and Ortega seems to be leaving out intel Angela could pass along to the resistance. Gunfire in the streets turns to explosions, a stray bullet shatters a window.

Craving more interaction, I found myself at one point glibly playing in Mass Effect style, that is going the warm route for chore execution and note correspondence for the sake of (or expectation of) sex. This was in part out of curiosity and to spice things up, but also, in a truer role-playing sense, I began to feel the familiar weight of Angela’s poverty and the allure of easy escape into the arms of the wealthy, connected artist. This does clash, though, with Angela’s fiery, sometimes too on-the-nose monologues upon entering the apartment week after week, criticizing Ortega’s wealth, naivety, and concern over art.

Most of Sunset‘s choices, like whether or not to push a romance or where to put away fresh-folded clothes, are small relative to what’s going on externally, but the most interesting on a personal level. That I didn’t even explore one possible choice, to not do my work, is interesting. But I only engaged Ortega for a lack of things to do — I didn’t respond to his notes at all at first — as the chores themselves are handled for you. This leaves the notes and choosing responses as the main interaction; otherwise, it’s less roleplay, more listening to Angela’s elevator monologues and diary entries while sitting in a particular chair in the apartment.

Sunset struggles with pacing, technical performance (movement is a tad wonky and it can run sluggish), and a disconnect between how its lead is written and, occasionally, what she does, player depending. The reduction of work to single click means the year’s worth of date title cards, going up the elevator, and going down at sunset feels more monotonous than housekeeping. The music and colors are effective at setting mood, though, and there are instances of emotional resonance, strong writing and voice acting. Shorter, more tightly strung, Sunset‘s character study set against the revolutionary backdrop would’ve shone brighter, but as is it still leaves you enough to consider and a calendar to change.