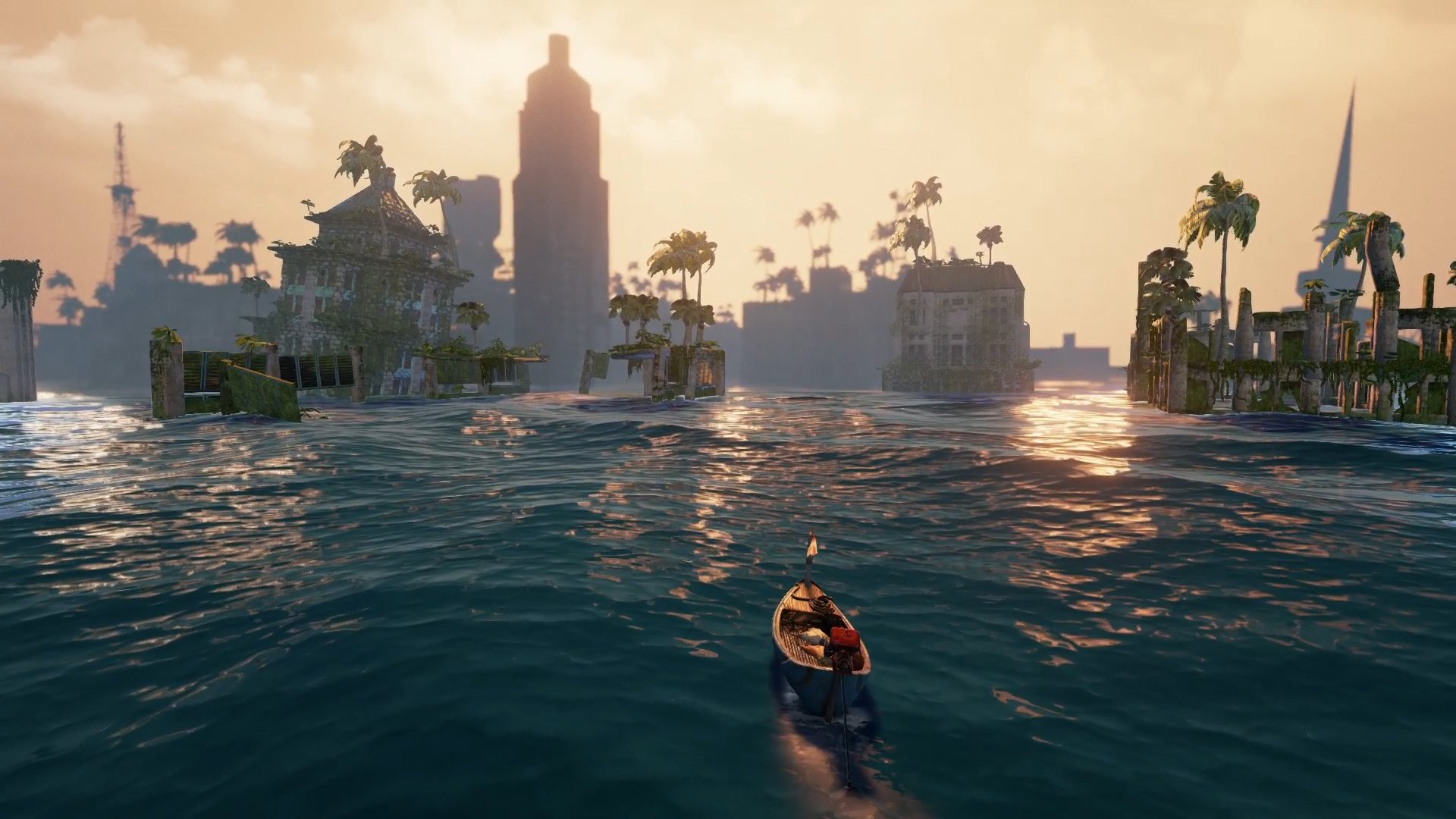 Sometimes games take concepts from other popular titles and combine them into a beautiful mix — this is not one of those games.

Was boating your favorite part of The Legend of Zelda: The Wind Waker? Do you play Uncharted and Tomb Raider games for the parts where you shimmy along and climb ledges? Surely most of you answered no, but if you answered yes to those questions, this is the game for you.

It certainly was not the game for me.

An immobile young boy with a gash on his abdomen and a young girl arrive on a boat to what looks to be a very tall church surrounded by water and the peaks of skyscrapers; the girl spots a parachute on the top of a skyscraper in the distance and decides to investigate. Upon hopping back in the boat and making her way to the structure without issue she slowly climbs to the top and finds an emergency ration that conveniently has just what she needs to help her brother.

Instead of scaling back down the skyscraper a cutscene plays showing the girl arriving back at the church and standing over her brother applying bandages. She then takes a nap before waking up and spouting off some random thing she needs to find to help her brother recover from his ailment, and sets off to scale another skyscraper. This cycle happens nine more times over the course of around four hours before a very predictable ending as unceremonious as the beginning.

Maneuvering the boat between the top most portions of skyscrapers through the glistening ocean underneath you as dolphins, whales, stingrays and other wildlife make themselves known is awe-inspiring at first; then you realize everything kind of looks the same. The main buildings where rations are located have their own unique architecture from afar, but when scaling up them they all seem rather similar.

Driving the boat isn’t exactly thrilling and at times can feel rather clunky especially when trying to fit through tight spaces and bouncing off surroundings. A boost button gives one a bit of extra speed at the cost of making it even harder to control, but it isn’t that useful as the game is open and exploration of basically the entire world is necessary. A map and periscope are provided to make exploration a bit easier; the map fills itself in while exploring, and the periscope can be used to locate rations, drawings and boost upgrades. Any items spotted with the periscope are marked on the map for easy locating. These tools combined make finding most everything rather easy, though they aren’t exactly hard to locate to begin with.

Climbing up buildings is the other main activity in Submerged, and it couldn’t be more dull. Close-up views of cement walls of the girl shimmying along randomly placed ledges just to climb up and find another ledge to shimmy and climb; it is one of the utmost boring gameplay mechanics in any game ever, and it makes up a majority of time spent in Submerged. Occasionally there will be a drain pipe to climb while enduring an extremely annoying clunk sound each time the character’s hands hit it, as if she were holding stones in her palms; luckily a minute climb up a ladder on the side of a crane at one point is more bearable.

There are branching paths while ascending buildings where 60 collectable drawings can be found that tell the story of how the city came to it’s watery demise. Each building that houses a ration will have a few of drawings, mostly on their own little side paths that are easy to spot. If a drawing is passed while ascending and the ration box is located you’ll have to make the call whether or not it would be worth it to backtrack, as grabbing the ration will take you back to your brother automatically and  you’ll have to re-scale the building otherwise. Since there are no fast travel points and the ration boxes can’t be reused to go back to your brother it leads to tedious backtracking no matter which option is chosen, there just may be more or less of a trek.

The rest of the city story drawings can be spotted in small buildings tucked around the city. These small buildings are nearly identical to each other and just require climbing up one or two easy to spot ledges to get to drawings, and have clearly been used as an excuse to extend the length of a still short game.

Overall collecting all the drawings easily took more time than gathering all ten rations, and those who don’t care about the story of the city will surely be able to complete the game in around two hours or less. I personally collected all the drawings and I still don’t know exactly what happened to the city; the drawings equate to colorful cave paintings and leave a lot to interpretation. In hindsight, I’d recommend not fretting too much about collecting them at all.

The main story is also told through similar drawings displayed with no real contextual in-game reason after collecting rations and going back to your brother. What little story here is so predictable and trope-ridden that it was hard to care about; a troubled family with an alcoholic adult and a protective older sister. I’m all for playing as a female character, but a girl in a post-apocalyptic world whose only trait is that she takes care of her younger male sibling just isn’t interesting or original. The story has been done a million times over, and really the only thing original Submerged has going for it is the setting.

Within under ten minutes time you’ll have experienced all the game has to offer; boring boating, equally dull scaling of buildings and peering out a periscope to find the next white and green building to climb. There is no failstate, no urgency, no combat, just moving from point to point and monotonously collecting shit. The story isn’t interesting, the gameplay is boring, everything looks the same aside from a few landmarks, and the whole ordeal is over in no time.

You’re better off saving your money instead of sinking it on the titanic failure that is Submerged.