Get your kicks on route Sixty Styx

The last time I played Dungeons and Dragons, I ended up in the shoes of a nasty gnome thief. A cocksure little prick who valued gold over the life expectancy of his friends, never took a shot that wasn’t cheap, and would gleefully steal anything that wasn’t nailed down. He was flippant, profane, and a blast to play.

I guess you could say I was accidentally training for Styx: Shards of Darkness. Paint that gnome green, give him a handful of crazy magic powers, and lose the party members, and you have the basic ingredients for Styx. He’s a jerkbag little goblin who is flippant, profane, and yes, a blast to play.

Shards of Darkness is the second Styx game and the third title the titular goblin has made an appearance in (he was originally a sidekick character in Of Orcs and Men, a combat-heavy RPG). Don’t worry if you haven’t played any of the other titles however, as Shards of Darkness does a reasonably good job of getting new players up to speed and into the stealthy, thieving, assassinating fun while gradually introducing the background.

And make no mistake, Shards of Darkness is a stealth game through and through, with more in common with the original Thief or Splinter Cell than today’s Assassin’s Creed. The emphasis is on being clever and sneaky. You can slit throats from the shadows, but don’t expect to be winning many duels of honor.

Thankfully, Styx is a tricky little goblin and comes pre-equiped with a well-developed repertoire of stealthy moves and acrobatics right out of the gate to help you accomplish that. He’s been skulking around in the dark for a long, long time, and it shows.

As a tiny goblin in a big world, Styx feels like a rat in the walls, slinking past guards, ducking under tables, and crawling on the rafters. He’s wonderfully light and agile compared to the hefty-looking guards trying to foil him.

One of the great joys I had playing this game was just watching Styx move. Everything he does is beautifully animated and fluid. He’ll clamber up a ledge, press himself flat against a wall as he shuffles across a four-inch overhang, and then leap off to swing across a series of ropes in one smooth sequence of moves — exactly as you’d hope a super-skilled goblin thief would. 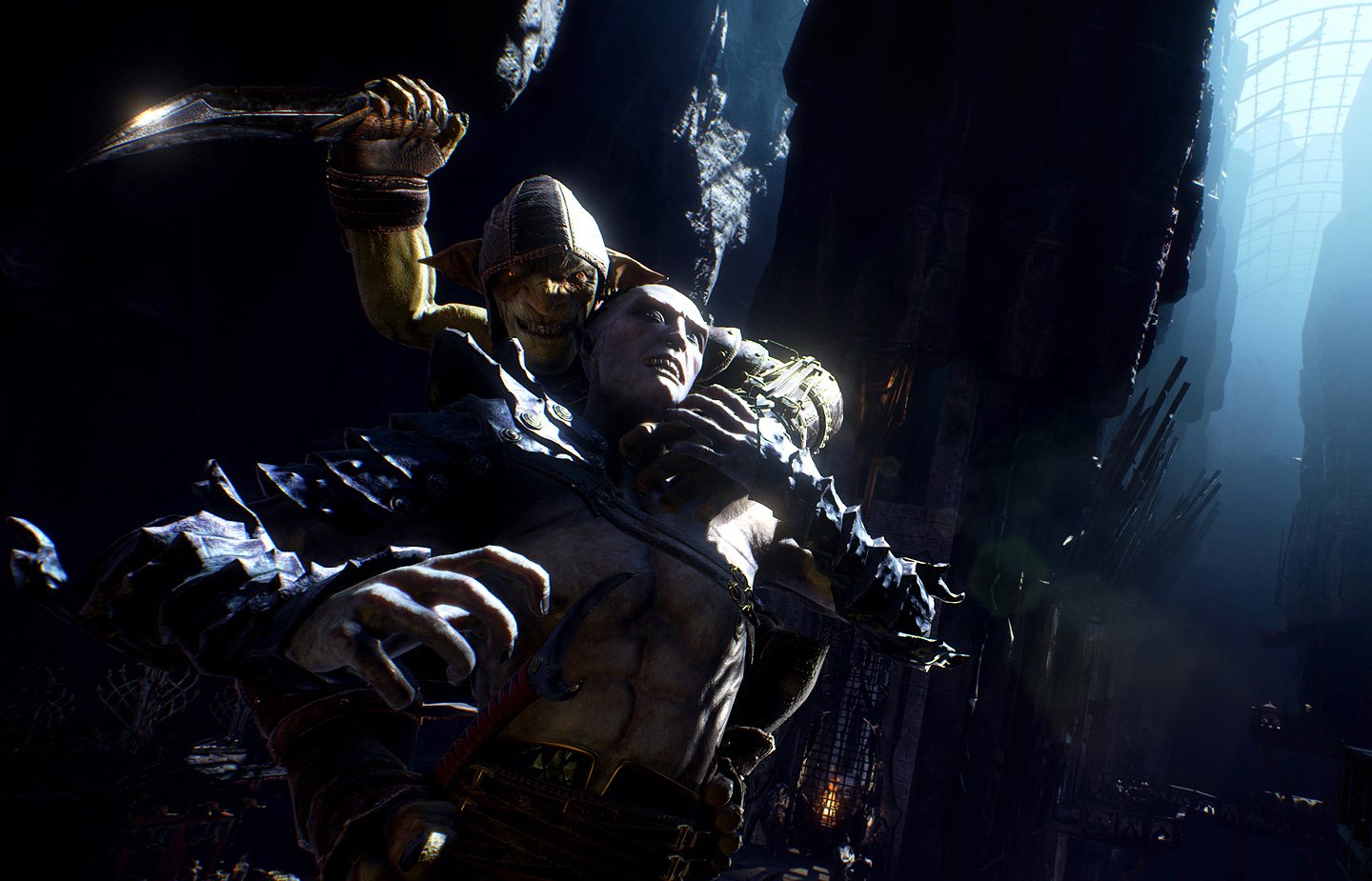 Of course, I suppose every thief or spy can shimmy up a wall or stuff a body in a broom closet these days (even if they don’t look as good doing it). What really sets Styx apart is his exotic collection of magical abilities. At any time, Styx can choose to make himself invisible (perfect as a last-second panic button when your cover is about to be blown) or mystically vomit up a clone of himself that can be independently controlled. The clone is delightfully disposable. He can be used to create a (almost certainly fatal) distraction, or as a second set of hands when solving a puzzle or pulling off a particularly complicated heist, and when you’re done with him, you can make him explode in a cloud of poisonous smoke. The perfect fall guy for your crime spree.

Aside from magic, Styx also has some more mundane methods at his disposal: poison darts, pockets of sand to snuff out torches, some glass breakables to toss as a distraction, the usual tools of the trade. As you progress through the game, skill points earned by completing story missions and meeting side-goals can be spent on expanding both his mystical abilities and the kinds of tools he can craft. I ended up taking an almost unseemly joy setting up acid mines, hiding behind a corner, and whistling — beckoning soldiers to their doom like some ugly, green little Siren.

There are plenty of chances to try out all of these tricks as you navigate the extremely open-ended levels. Every mission, whether you’re trying to sneak aboard a secured airship, or sniff out the identity of a shape-shifting spy, allows for all kinds of approaches. There are no set paths or suggested routes to speak of, instead you have to keep your eyes open and blaze your own sneaky little trail. You can navigate around the outskirts of the level, clinging to wall grips and ledges, or wander straight through a guard’s barracks using a little invisibility and maybe a well-placed distraction clone, or whatever else seems fun at the time.

Unfortunately, as entertaining as it can be to watch Styx weave, crawl, and sabotage the various fortresses and shanty towns that make up his grim world, controlling him isn’t always as pleasurable as it should be. Everything Styx can do on the ground works perfectly — it’s when you have to jump that things get a little wonky. His slightly floaty jump and somewhat unreliable ledge grabbing makes infiltration difficult at times, resulting in undeserved deaths. Even deep into the game I found myself missing ledges or sailing past a rope I meant to swing on.

The occasionally sloppy control is compounded by the unpredictable enemy vision cones and alertness levels. While there is a “detective vision”-like mode that smooths out the rough edges of picking out foes and knowing which direction they’re looking, it is noticeably less-powerful than similar mechanics in other games (until you invest serious skill points into upgrading it, at least).

Bereft of a Soliton Radar or cowl-based super computer, Styx must occasionally guess whether or not a guard is waiting just to the side of a window he is about to leap through, or peer fruitlessly through the latch of a locked door, scanning for sentries. For all people may complain about games “dumbing down the stealth” with those kinds of abilities, being without them really reminds you why most stealth games have embraced them.

Of course, this slight wonkiness means you’re likely to be caught out by an enemy here and there. I learned quick. An hour into the game and every cry of alarm or sudden smack of a billy club triggered an instant quick-load from me. While other recent stealth games have gone to great lengths to make combat interesting and enjoyable, encouraging gamers to “play it where it lays” when they get caught, Styx embraces the old-school theory of “being spotted is bad and you should feel bad, now eat your pointy, jabby vegetables.”

As you might expect from a 90-pound goblin armed with a dagger, Styx doesn’t put up much of a fight when armor-plated guards rush him. Tellingly, there is no direct attack button to speak of, so Styx can only parry an incoming blow and then execute one of his standard stealth takedowns when the enemy is staggered. If there is more than one enemy wailing on you, this is nearly impossible (to be fair, the stilted animations of the guards make it pretty hard even when there is just one; Styx might be beautifully animated, but no one else is). To top it off, guards are dogged in their pursuit and have ranged weapons to pelt you with in case you get clever and try to climb a drain pipe to safety.

This is not The Phantom Pain. I was never secretly hoping to get caught so I could rocket-punch some fools to death. Styx stays in the shadows or he dies. Personally, I found the emphasis on stealth refreshing, but tastes may differ.

I’ve noticed while writing this review, I’ve been referring to the main character a lot more than usual. It’s all “Styx can do this cool thing” and “Styx kinda sucks at this other thing.” This wasn’t a conscious choice. I don’t normally bang on about “Ken has this cool uppercut” or “Snake really loves to vape” in a review. The reason is obvious – Styx as a character is a huge part of this game.

In an age of helmeted space marines and indistinguishable gruff mounds of stubble, Styx is a welcome change of pace. He’s a character. He snarks, he schemes, he makes bad (bad) jokes and chews up the scenery. Your mileage might vary on how funny you find his quips and dated pop-culture references (Terminator 2 gets shout-outs in more than one punchline), but at least Styx has a voice and a definable personality. He isn’t some cypher to project yourself on, or a protagonist that has been through so many rounds of corporate committee notes and refinements that he has lost all semblance of individuality. He’s Styx.

Not only does Styx have a personality all of his own, he also lives in a very unique and strange setting. Styx has inherited a surprisingly developed and lore-rich world from the previous games. While there’s plenty of fantasy cliches to go around, there are also interesting characters, elaborate environmental set-pieces, and fun twists in the plot. I didn’t expect to find myself so invested in the story of a greedy little goblin snot rag, but here we are. What a pleasant surprise.

And really, pleasant surprises are what we’re talking about with Styx: Shards of Darkness. Don’t let the reduced price tag or the fact that Styx’s previous titles aren’t exactly household names fool you. Once you get past the slightly budget look of the UI and occasional control jank, there is a solid core of a pretty damn good stealth game here. Give him a chance, and Styx might just steal your heart (only to pawn it at a fraction of its value, the little bastard).