A disappointing chapter in a sad story

I’m sure it’s difficult to write a compelling story mode for a fighting game. First, you start with a cast of disparate oddballs, karate-wizards and leggy Interpol agents, each with odd backstories that you have to find a way to weave together. Then you need to construct a plot that will have every conflict lead to, and be resolved by, two people punching each other. It’s a tough needle to thread, and a reason why I’m generally pretty easy on fighting game plots. A certain threshold of cheesiness is to be expected.

Still, even acknowledging those difficulties and grading on a generous curve, Street Fighter V’s long-awaited story mode, A Shadow Falls, is so disjointed, eye-rolling, and cliché that it’s difficult to find nice things to say about it. If Capcom were feeling at all smug about Comcept’s “better than nothing” goof, it had better take a long look in the mirror.

[Note: This article pertains only to the story mode content. For a full appraisal of the game, check out our original review] 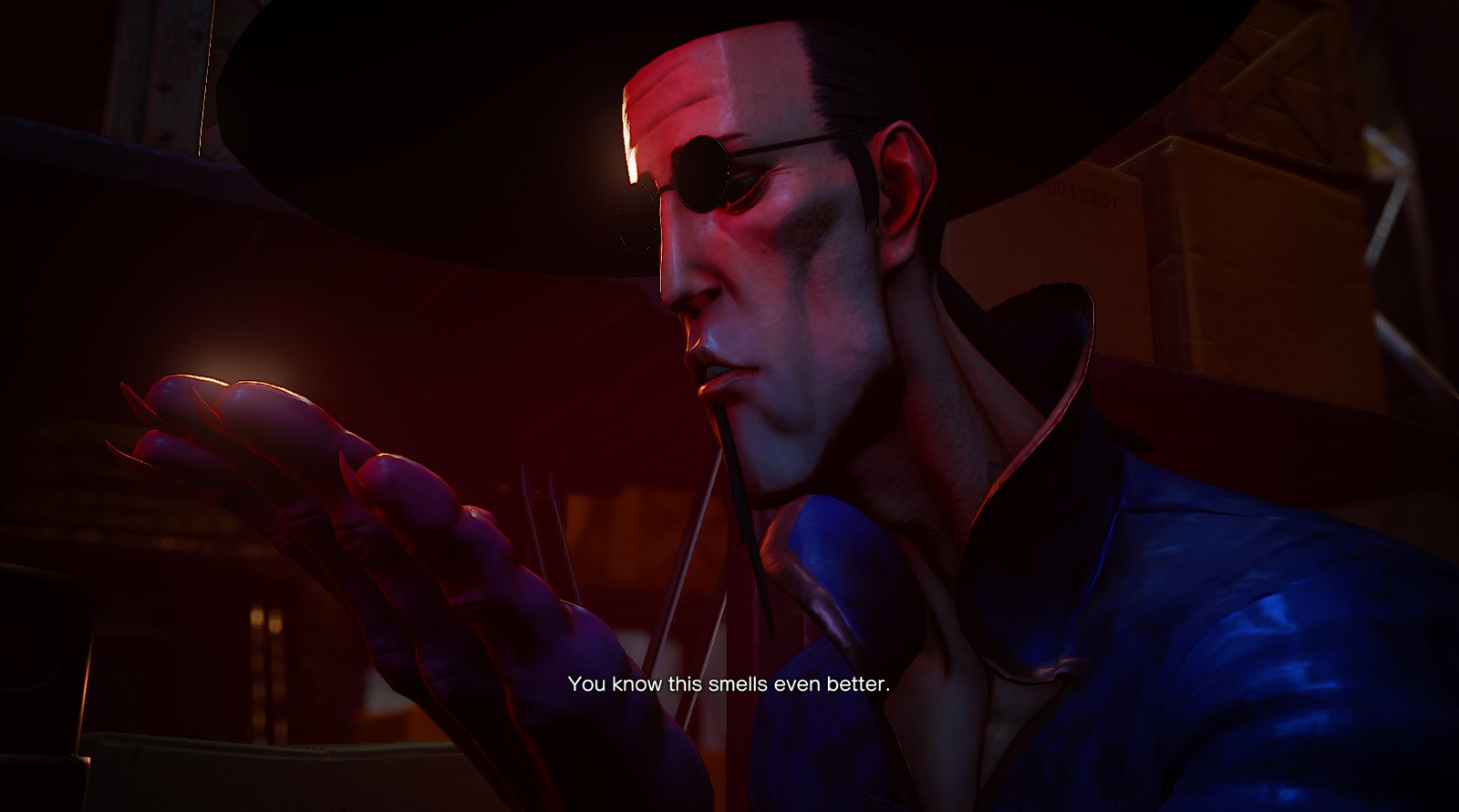 I don’t think you can speak honestly about Street Fighter V’s story mode without comparing it to the recent efforts of NeatherRealm’s Mortal Kombat and Injustice games. So I won’t. Capcom certainly took cues from those titles, stitching together fights between story-advancing cinematics that drop the player directly into each encounter. But, ironically, much like all the “me too” fighting games that came out in the early ‘90s riding on Street Fighter’s coattails, this entry apes the style of NeatherRealm’s stories without really understanding what makes them work.

Structurally, A Shadow Falls is a mess. While the beauty of Mortal Kombat’s storylines is how seamlessly they transition from cinematic to fight, Street Fighter V lacks that smooth consistency, placing momentum-killing loading screens before every brawl. The balance between cinematics and fighting is wildly uneven as well. Sometimes you fight three battles in a row with small 30 second clips in between, while other times you spend nearly 20 minutes listening to laborious exposition and watching go-nowhere plotlines. 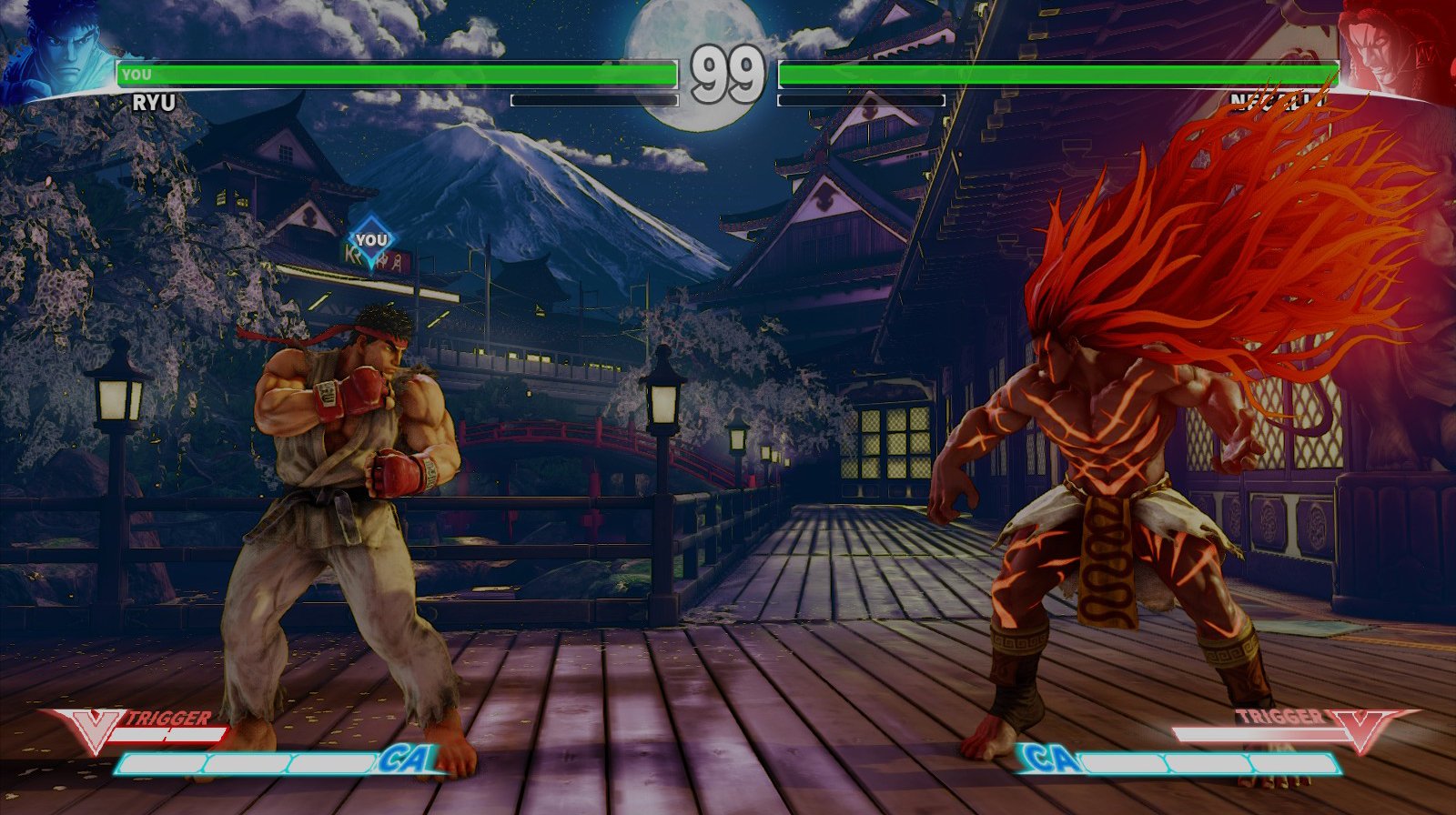 While Mortal Kombat and Injustice dedicate each chapter to a particular character, giving you three or four fights to find your footing, Street Fighter V’s story bounces between characters like a particularly coked-up game of racquetball. In the 40-odd fights that make up the story, there are only one or two instances where you play the same character twice in a row. It just bounces you off to the next pair of fighters, often without giving you a strong indication of which fighter you’ll be controlling. Hell, sometimes you don’t even play on the same side of the screen, leading to some jarring moments of confusion where Ryu refuses to throw a fireball while Necalli tosses punches into the air like a madman.

The constant rotation of characters never gives the player a chance to build up a rhythm. If you normally only stick to one or two fighters (as the online mode heavily encourages you to do), it’s difficult to get a feel for an unfamiliar character in a single round. It leads to a lot of random jump-ins and sweeps with very little sensation of mastery or learning. You just hit buttons until the enemy health bar is gone.

This is especially unfortunate for occasions where the game allows you take control of new and upcoming characters, such as Ibuki, Balrog, Juri, and Urien. Having a chance to try out some of the unreleased DLC characters should be one of the high points of the mode (I almost had my own Long Island Joe moment when I realized I got to fight as Urien), but instead, it’s so fleeting that it just feels like a tease. 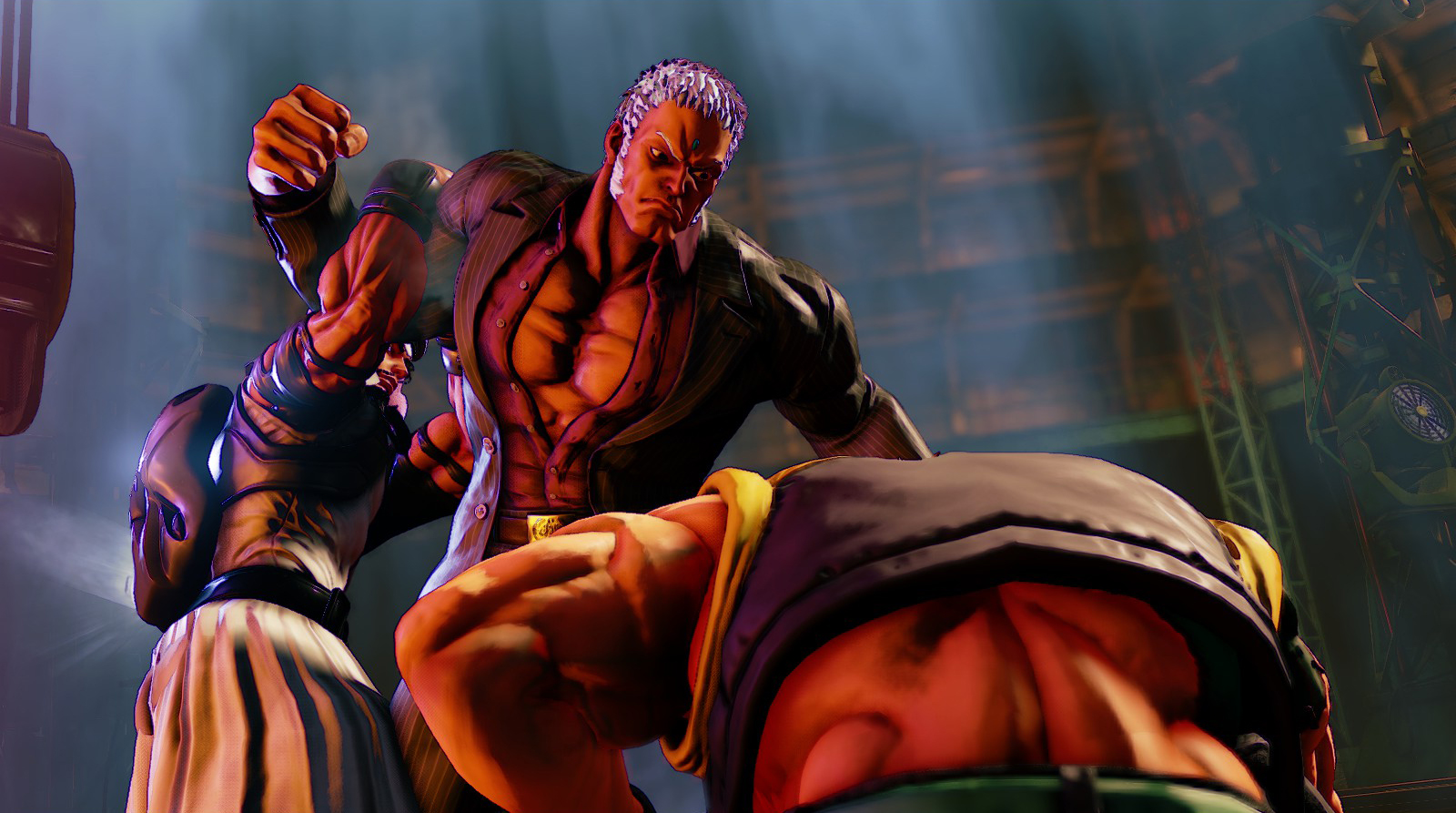 That’s not to imply you need all that much expertise to keep things moving. Much like the individual character stories the game launched with, the AI for most of the story mode is laughably inept. The World Warriors and Shadowloo goons are reduced to shuffling punching bags who occasionally pantomime at fighting when the mood strikes them. At the very end of the game a few boss characters finally grow a spine, but it’s too little too late. The majority of the experience is one long unsatisfying slap fight.

To be fair, an Extra difficulty mode unlocks once you defeat the normal story mode, but who would want to slog through it all over again?

Narratively, the story is weak, even acknowledging the challenges of writing for a fighting game. A jumbled mess of no less than two martial art prophecies, a doomsday weapon that also functions as yet another Psycho Drive device powering up Bison, six different MacGuffins in the form of chess pieces for the World Warriors to bumble around searching for, and a fistful of random characters that appear and leave with no explanation. Yikes.

Seriously, I’m a pretty big Street Fighter fan. I’ve played every game since Street Fighter II, watched the anime series, the anime movies, and even dug into some of the comics. Even still, I have no idea who some of these people were supposed to be, or even their names. I was referring to characters as “Little Hacker Girl,” “Psychic 8 Mile,” and “Russian Girlovich” right up to the end of the game. 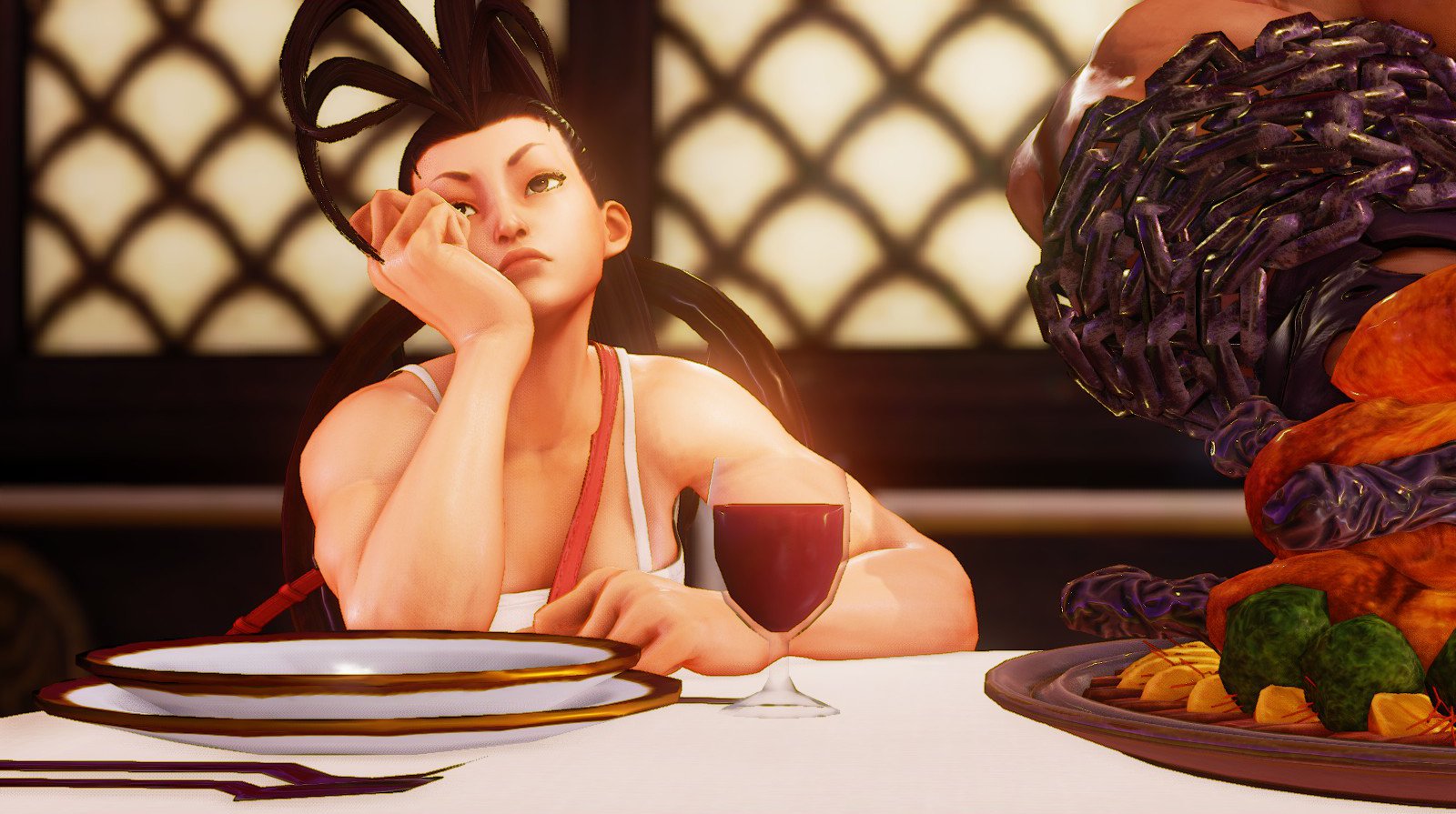 All of this narrative diarrhea is told with a painfully cliché amount of anime cryptic-ness and forced mystery. Nobody in this goddamn world can just say what they mean without some kind of mysterious allusion to “that person” or “when the true battle begins.” It’s exhausting.

That’s not to mention the outlandish number of momentary misunderstandings that lead to street brawls. Yes Laura, I’m pretty sure Ken “millionaire martial art champion” Masters isn’t roughing up your brother for his lunch money. Similarly, Alex, do you really think Dhalsim — a yoga mystic who is literally hovering off the ground — is a common mugger who’s come to jack your truck? C’mon my dude.

I know that the game needs an excuse to get these people to fight, but they just come across as morons.

While the story mode is fairly breezy (I completed it in just a couple of hours), much of it feels like filler. Like an anime series desperately padding out 10 episodes worth of plot to fill an entire 20-episode series, many of the scenes in Street Fighter V’s story mode feel completely disposable, you could yank them right out and not change a thing about the overall story.

Events are foreshadowed that never come to pass and characters are given flashy introductions only to immediately disappear (Laura is introduced twice in big conspicuous scenes, only to fight once and vanish until the climactic showdown where she inexplicably appears in the background of a major brawl all the other characters had to ride a chopper to get to). Despite being set up as a new big bad for the series, or at least a major plot figure, Necalli is given particular short shrift and seems entirely forgettable. 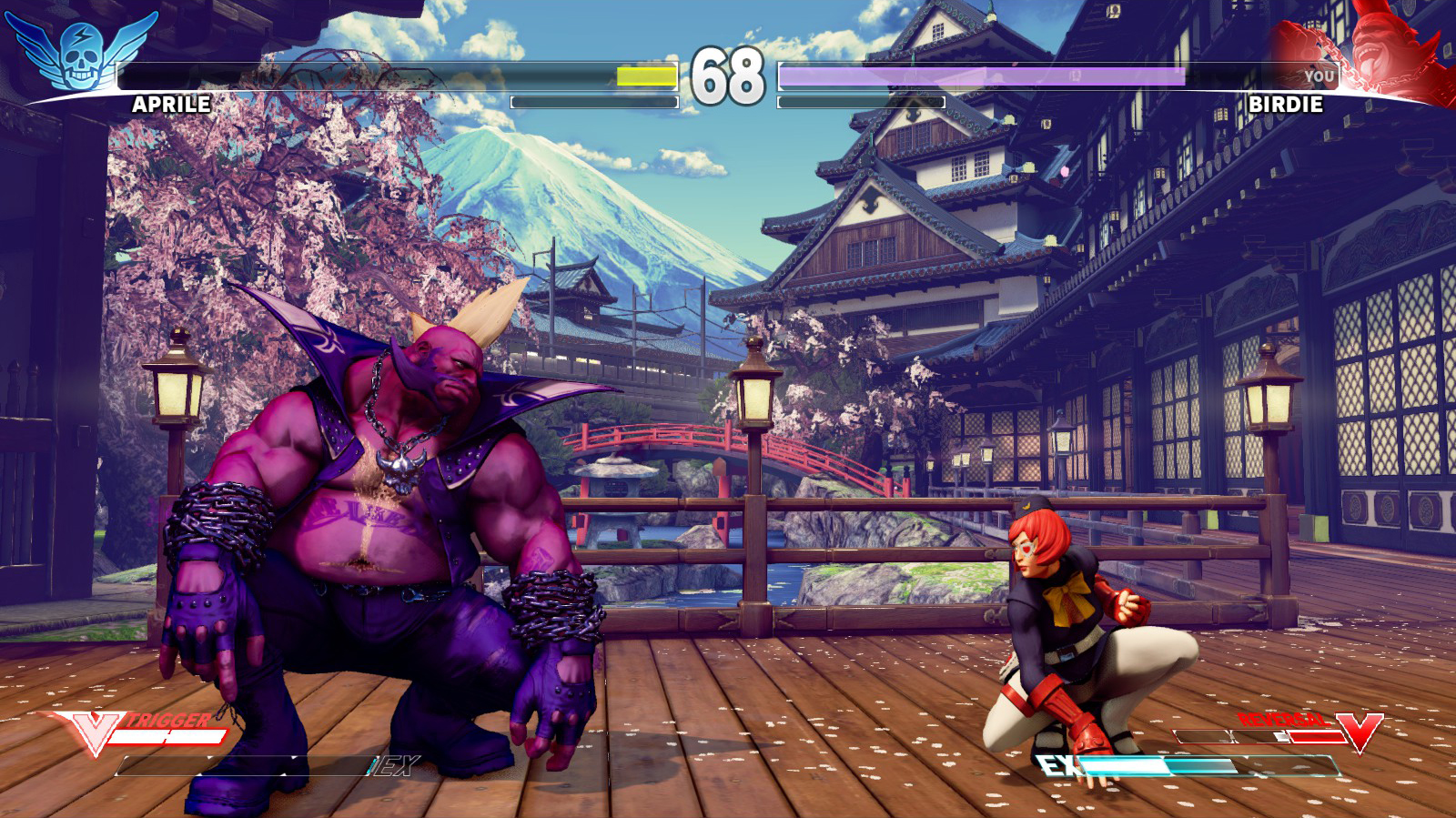 While the plot is a mess and the structure is garbage, the story mode does excel at novelty. Surprise fights against random Shadowloo cronies, gimmick fights with unlimited V-Trigger, and appearances from damn near all of the Bison Dolls put a smile on my face. These fights were few and far between, but always a welcome sight. While the random fighters borrow their basic movesets from regular cast members, many of them have unique special moves and delightful custom animations. A one-sided fight against a hapless policeman brandishing a baton was a particular highlight.

It’s not just random NPCs who get the unique treatment. Battles between familiar characters are replete with custom voice quotes and exchanges. I always love it when fighting games go the extra mile to acknowledge different relationships mid-fight (BlazBlue is the reigning king of this kind of contextual variation). While many of the fights were painfully boring mash-fests, I found myself looking forward to each custom victory quip. 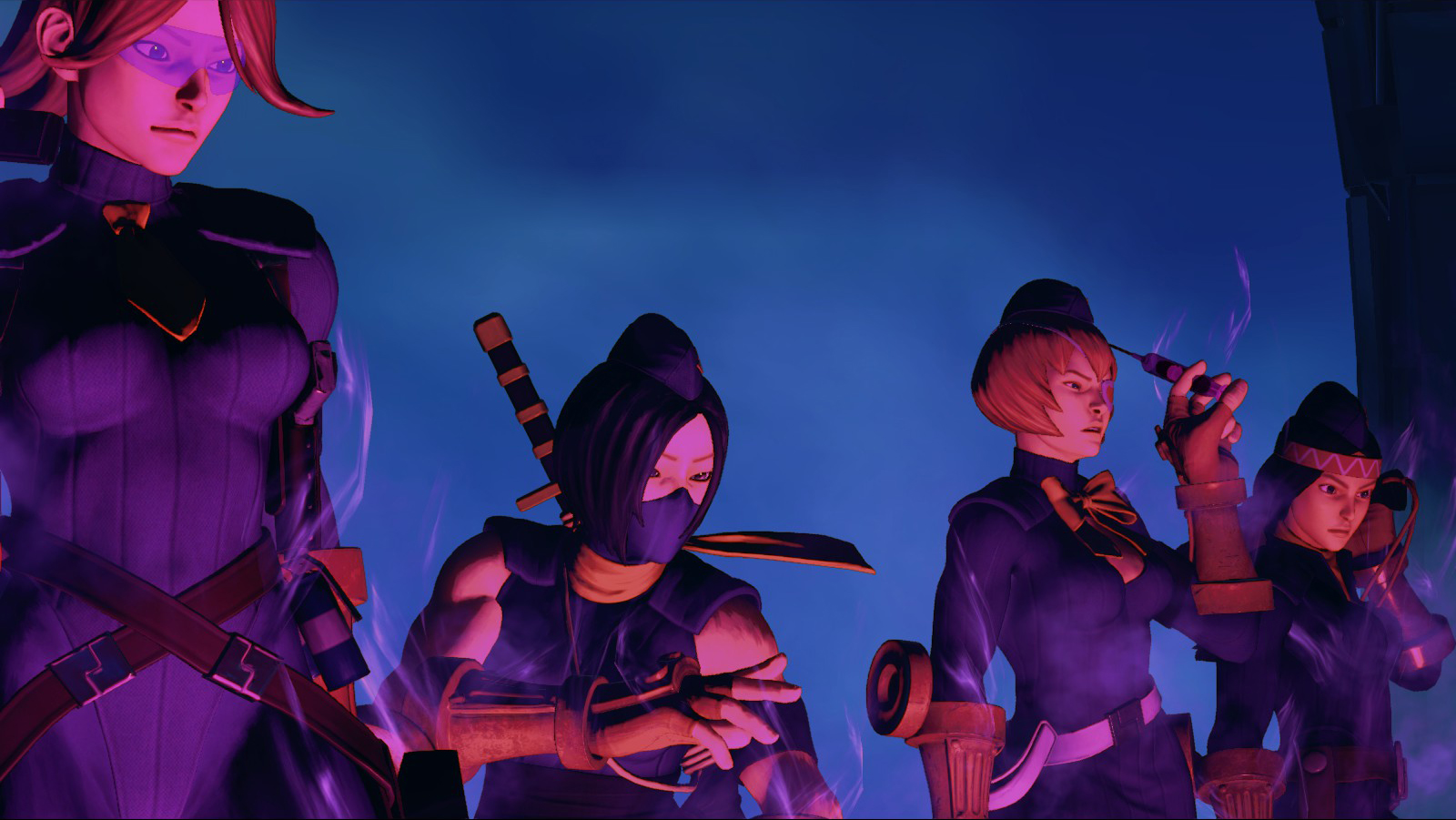 Capcom has managed to trap itself into a worst possible scenario with its post-launch content. Street Fighter V was rightfully skewered on release for its lack of content, but releasing the story mode nearly five months later doesn’t fix that, it only makes the problems of the mode that much more apparent.

The story content is not good. It’s poorly written, boring to play, and filled with small annoyances, but in a weird way Street Fighter V would have been a better game if it had launched with it. Even if it had been just as bad, it would have at least been seen as a noble attempt to modernize Street Fighter’s narrative. The eye-rolling dialog and shaky plot structure would have been easier to ignore if it was just another mode in a complete package.

As something that Capcom essentially had to be shamed into doing as a sort of post-launch apology, it’s a different story. The blemishes are raw and sore, the flaws impossible not to gawk at. This is what took another five months? It’s a damned shame that only adds to the increasingly sad story of Street Fighter V — an amazing fighting game that is almost impossible to recommend.

[This review is based on a retail build of the game provided by the publisher. It only covers the contents of the campaign.]