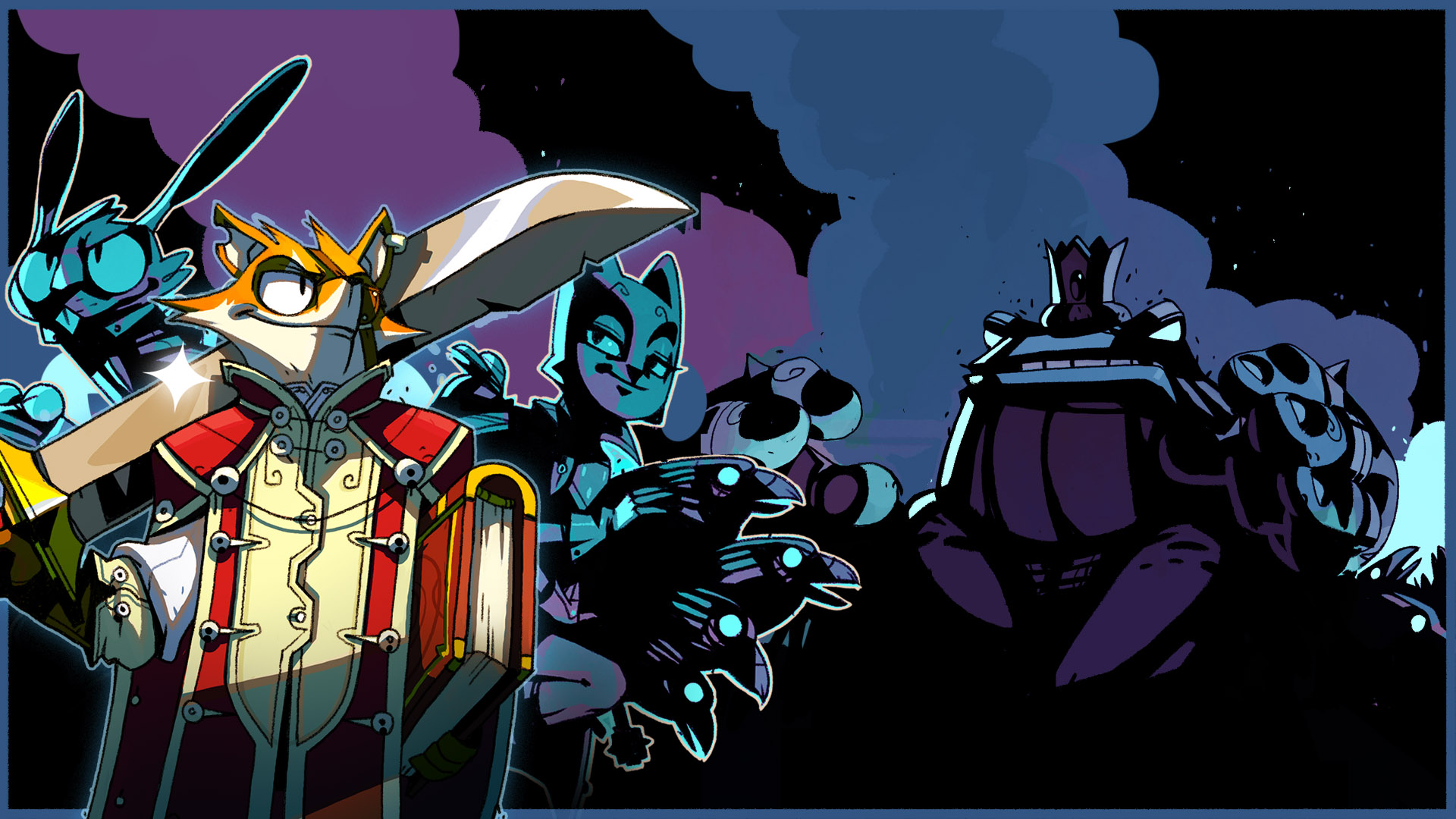 I spent a few years of my childhood voraciously consuming “Choose Your Own Adventure” books. There were many types, but the “Goosebumps” series was my favorite to thumb through. Instead of throwing the pigskin around with rough-and-tumble neighbors, I would lay in a dark room (it was daytime, but I would staple blankets over the windows for a spookier atmosphere), eyes wide as one wrong turn would be enough to kill my protagonist.

Game developers often flirt with the idea of choice, sometimes even citing those books as an inspiration. Players want to feel that they have some semblance of agency in these imagined spaces, that there will be ramifications as they carve through ones and zeros beyond an extra wave of enemies. Unfortunately, more often than not, these far-reaching goals are realized in the form of a different kind of binary: press A to be good, and press B to be bad.

Spearhead Games’ Stories: The Path of Destinies isn’t perfect, but it’s one of the best adaptations of player-decided narrative that I’ve seen. 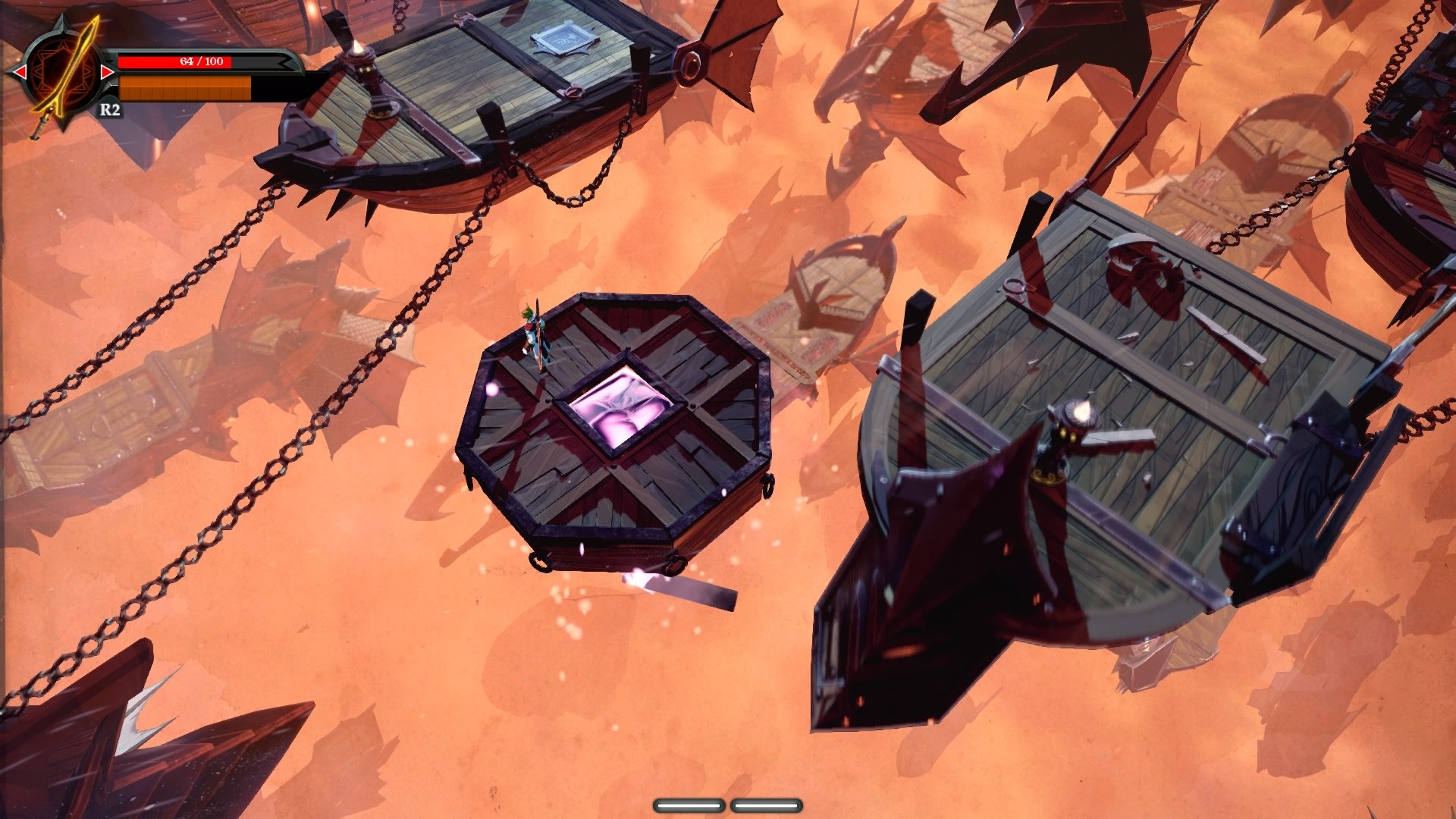 Spearhead’s latest is one of those games where taking it at face value is a grave mistake. The title alone sounds like it came from an online name generator designed to make your game sound as generic as possible. It’s thematically fitting, but it’s not exactly sexy.

Playing as an anthropomorphic fox swordsman named Reynardo in a sky full of floating islands, you’ll be befriending rabbits and cats, and preparing to fight against an evil toad king and his raven army. An omnipresent narrator voices all of the characters and events, frequently commenting on actions like breaking pots or opening chests. He also serves to elucidate on the main crux of Stories: Reynardo quickly finds a book that allows him to make fate-altering decisions. Sure, the wrong decisions all lead to various grisly ends, but our foxman could become a True Hero if he follows the right path.

Take for instance the first choice: should Reynardo save his old rabbit friend — who has a history of being unreliable — or sever that tie and search for a weapon that could turn the tides of war? What has the greatest potential in this technicolor fantasy world? Your decision determines which island you’ll head to next, who Reynardo will ally with, and how he’ll come to one of 23 inevitable ends (the 24th is the singular ending where the Fantastic Mr. Fox doesn’t die). Even when a playthrough does end in death, there’s a chance that you’ll learn one of four immutable Truths, which helps to discern what choices will lead to a happy ending.

Unlike most games, these branching paths are noticeably different. I decided to choose a path of neutrality, thinking that would possibly lead to the True Hero path. I won’t say what actually happened, but, uh…let’s just say that it didn’t go as expected. My favorite part of forging my own path was the narrator constantly sowing the seeds of doubt in the soil of my conscience. Oftentimes I’d do what I thought was right, and he’d pipe in with something like “Reynardo wasn’t quite sure why he did that. Last time he did, it killed him. But maybe not this time!” I already felt uncertain, but had to laugh whenever the game acknowledged these thoughts. Though the narrator mostly kills it, occasionally the script dips into pop-culture references like blurting out “Praise the sun!’ without context, which is less amusing. 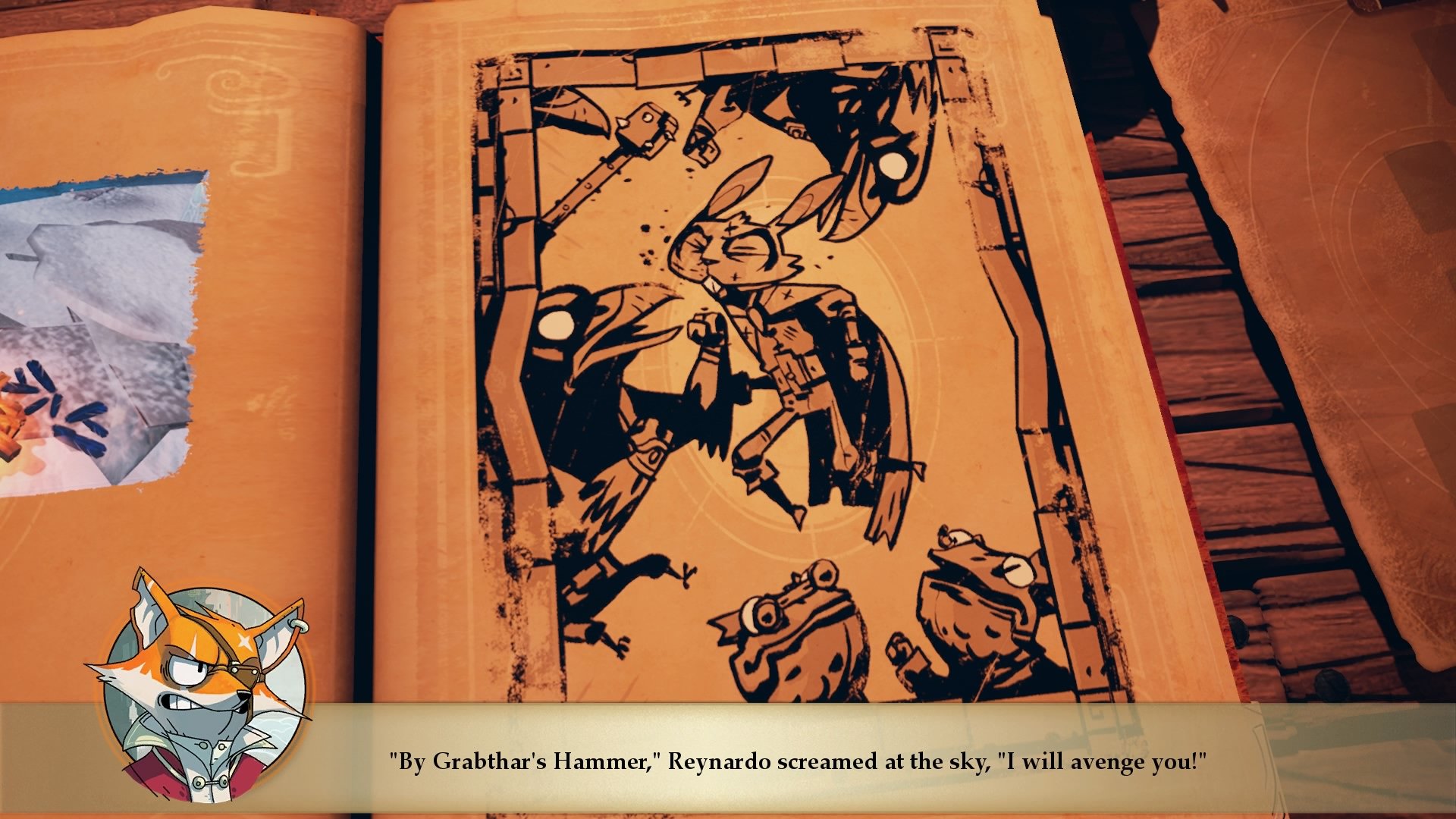 “But it’s a gosh-dang game, not a book, Zack! How does it play?” I’m glad you asked! While traversing mostly linear paths from an isometric perspective, raven soldiers will engage you in Arkham-esque combat complete with a combo meter. Reynardo can dart around with a dodge move, grab enemies with a hookshot, throw them, and use four different magical swords to quarter them as he pleases. Countering is achieved similar to Metal Gear Rising: Revengeance, where you have to attack in the direction of an approaching enemy. It’s snappy, and most fights are over quickly. The better you do, the more experience you get, so keeping your moves varied and avoiding get hit is worth it every fight.

With that experience, you can unlock new abilities through a skill tree. Some of these are enhancements like stronger attacks or more health, but later on they became more impressive. I was eventually able to dash through enemies, freeze time when I did a perfect counter (which leads to the visually-impressive particle effects in the screenshot below), and once I earned a high-enough combo, I could attack enemies from any distance. While fights only consist of a few enemy types (raven, shieldraven, explosive raven, and a couple of magic users) and no bosses, I always looked forward to battle instead of dreading it.

Your four swords have magic abilities — fire, ice, wind, and healing — but they also serve as keys to new areas. On one playthrough, you might see a fire door and not yet have that weapon. When you eventually return to that area on another attempt, you can go through and possibly find more ore to upgrade your swords, magic gems that serve as stat buffs, or lore-expanding notes. This helps to give you something to look forward to as you see the same locations over and over again. 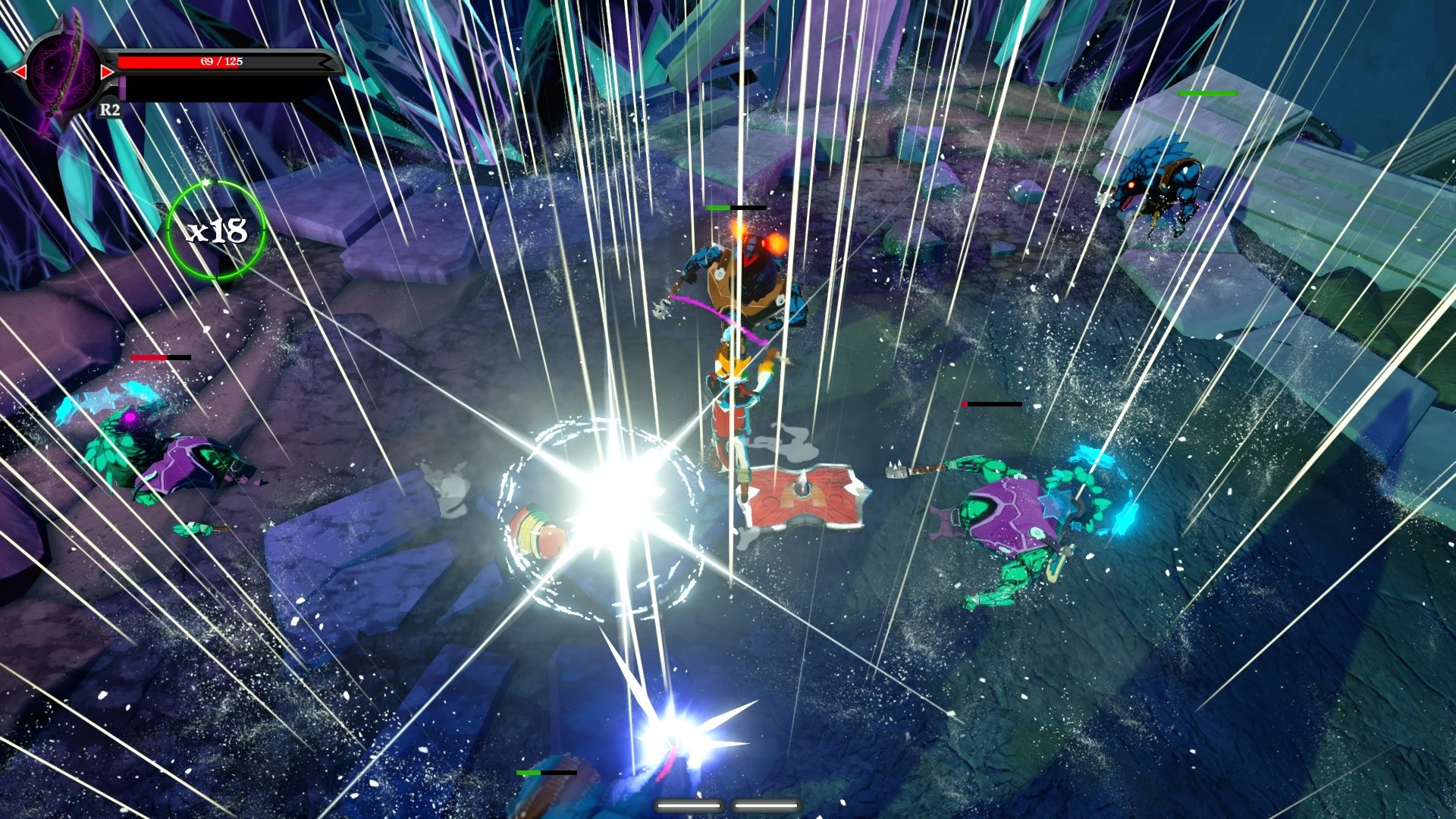 Which leads to the main problem in Stories: as cool as it is that there are 24 different endings, by the time I reached the True Hero route on my sixth try, I was already tired of seeing slight variations of the same settings. Chapters such as the flying warship armada are a sight to behold the first few playthroughs, but don’t hold much magic when you have to return to them ad nauseum. The dialogue changes and magic doors do help to assuage some monotony, but I can’t imagine going through the game 18 more times. I had already found all of the gems, upgraded my swords to the maximum level, and navigated the best possible route. Outside of more ability upgrades, I feel like I’ve seen enough of what it has to offer. Which is fine, since I probably played for about eight hours or so. I’m just glad that I don’t have the tendency to be a completionist, because Stories would have burnt a hole in my brain.

Less forgivable are the weird bugs that I encountered throughout. The frame rate ranged from about 20-40 depending on what was occurring at the moment. That’s a shame since the game looks fantastic when it’s working as intended. Once I went to a magic door with the wrong sword equipped, and the tooltip telling me I had the wrong sword out attached itself to Reynardo for the next twenty minutes. There was another circumstance where I tried to go down a set of stairs but ended up floating off the top of them and could run around, a fox in flight. My favorite glitch was when I was suddenly able to sprint around at triple the standard rate, but I only enjoyed that because I hadn’t earned the move speed upgrade yet and it cut down on tedium.

Despite some repetition and a handful of weird glitches, it’d be hard for me not to recommend Stories: The Path of Destinies. The “Goosebumps” kid in me was just too excited to have branching narratives from a developer that had fun with the concept instead of using it as another box to check in its marketing plans. I’d gladly return to this wonderfully weird world, but if there is a next chapter, I hope that there’s more to see.

Filed under... #Stories: The Path of Destinies