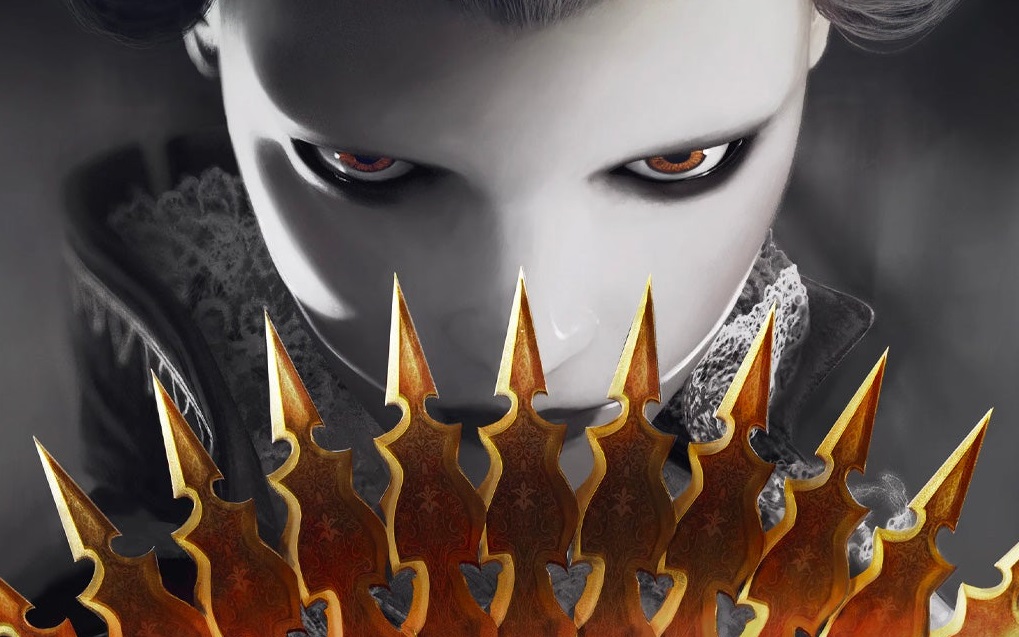 Paris. 1789. The Renaissance was so very long ago… Did it even happen?

Looking around the fallen capital, one would fairly assume not. The City of Lights, a place celebrated for its art, invention, culture, and architecture now resembles The Gates of Hell, a vision soon to be crafted by Rodin himself. The streets are awash with blood and bodies — innocent civilians, rebellious conspirators, and even the king’s own army lying in miserable piles of broken flesh.

And the king himself? This citywide massacre is his doing, the heart of his capital torn in two by a seemingly unstoppable army of robotic soldiers. Far from being the loyal guardians and entertainers of Paris, as initially designed, the automaton army has instead become her oppressor, stalking the cobbled streets and killing those who would stand against the bereaved monarch with extreme prejudice. Starving, scared, and cowering within their own homes, the city’s populace has neither the weaponry nor the knowledge to take on The Clockwork King’s footsoldiers, let alone flee the city for safer ground.

But there is one hope. One automaton that is not under the command of King Louis XVI but is, ironically, guided by his own lady wife, Marie Antoinette. She is the Queen’s personal bodyguard, built to withstand the most brutal of assault, outfitted with a devastating arsenal of weaponry, and blessed as one of the only automatons in France to possess anything close to free will.

She is Aegis, and she is come to open the purple testament of bleeding war. 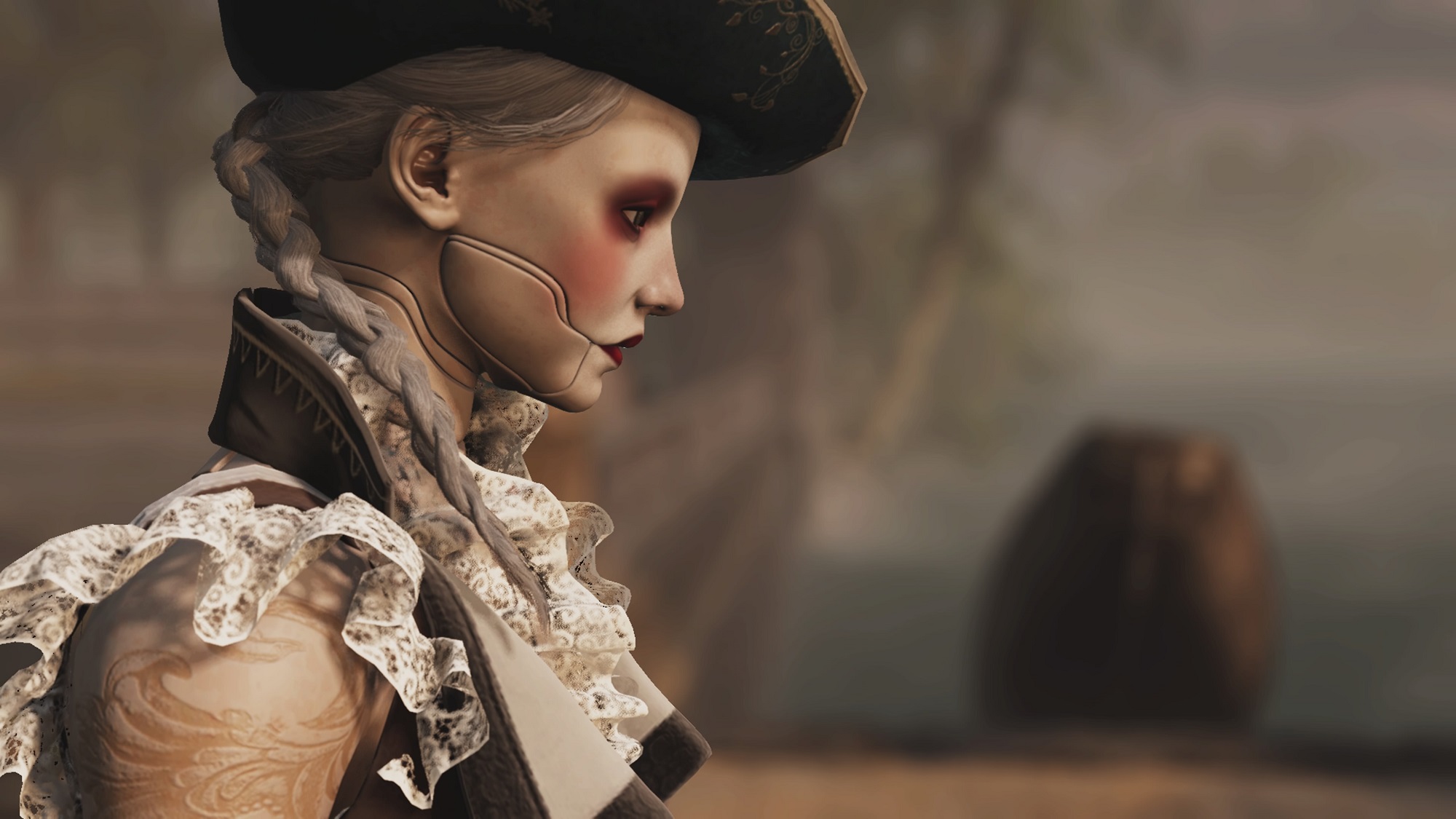 Steelrising is French developer Spiders’ first title since colonial RPG GreedFall, which launched to middling praise back in the fall of 2019. Much like that title, Steelrising focuses on an alternate retelling of another specific moment in human history — namely the French Revolution, which waged its bloody, class-based warfare in the late 1700s. Steelrising takes the framework of this tumultuous, world-shaping event and uses it as a backdrop to tell its own fictional tale, blended with a phantasmagoria of anachronistic technology to create a fictional retelling of these dark days of cake and head severings.

In Steelrising, players step into the delicate chassis of Aegis, a high-level automaton who serves as bodyguard to Marie Antoinette, currently residing in “protection” (see “relative captivity”), at the Chateau de Saint-Cloud. Aware that the streets of Paris are torn asunder, Queen Antoinette orders Aegis to travel into the heart of the capital and find her creator, Eugene de Vaucanson, who may hold the key to stopping the increasingly unstable Louis XVI and his battalion of automatons. Automatons that are already leading a campaign of death and violence throughout the capital.

Politics is politics, however, and every actor on this stage has a part to play. Queen Antoinette, King Louis, Vaucanson, the members of the Estates General, the mysterious Comte Cagliostro, and, of course, the sublime Aegis herself — who will emerge the victor when the gears finally stop turning?

Rise of the Robots

For all intents and purposes, Steelrising is a Soulslike — its gameplay typified by map exploration; deliberate, brutal combat; the accessing of stat-building checkpoints; and the mastery of both alchemic weapons and long-winded attack animations in order to win the day, whether stood against the lowliest of guard bots or most terrifying of titans.

Strangely, however, the chosen genre does not synergize wholly with the universe Spiders has created. There is an ever-present impression that the developer should have crafted Steelrising as a straight action-adventure, akin to Horizon: Zero Dawn, or the Batman: Arkham series.

While Steelrising does offer a solid and capable Souls experience, some of its brilliant conceptual capability is certainly lost in its slow-paced, measured, and deliberate approach to world traversal and in-game action. By choosing to jump on the, shall we say, Soulswagon? Steelrising leaves some of its own potential on the table, wearing the Souls genre in an admirable, but ill-fitting fashion. One wonders what might have been had Spiders chosen to go with a different vibe for the chrono-bending adventure.

Still, while I do think that the world and its engine do not entirely sync, it must be noted that Steelrising is most certainly a fine — and pretty darn classy — adventure title in its own right. 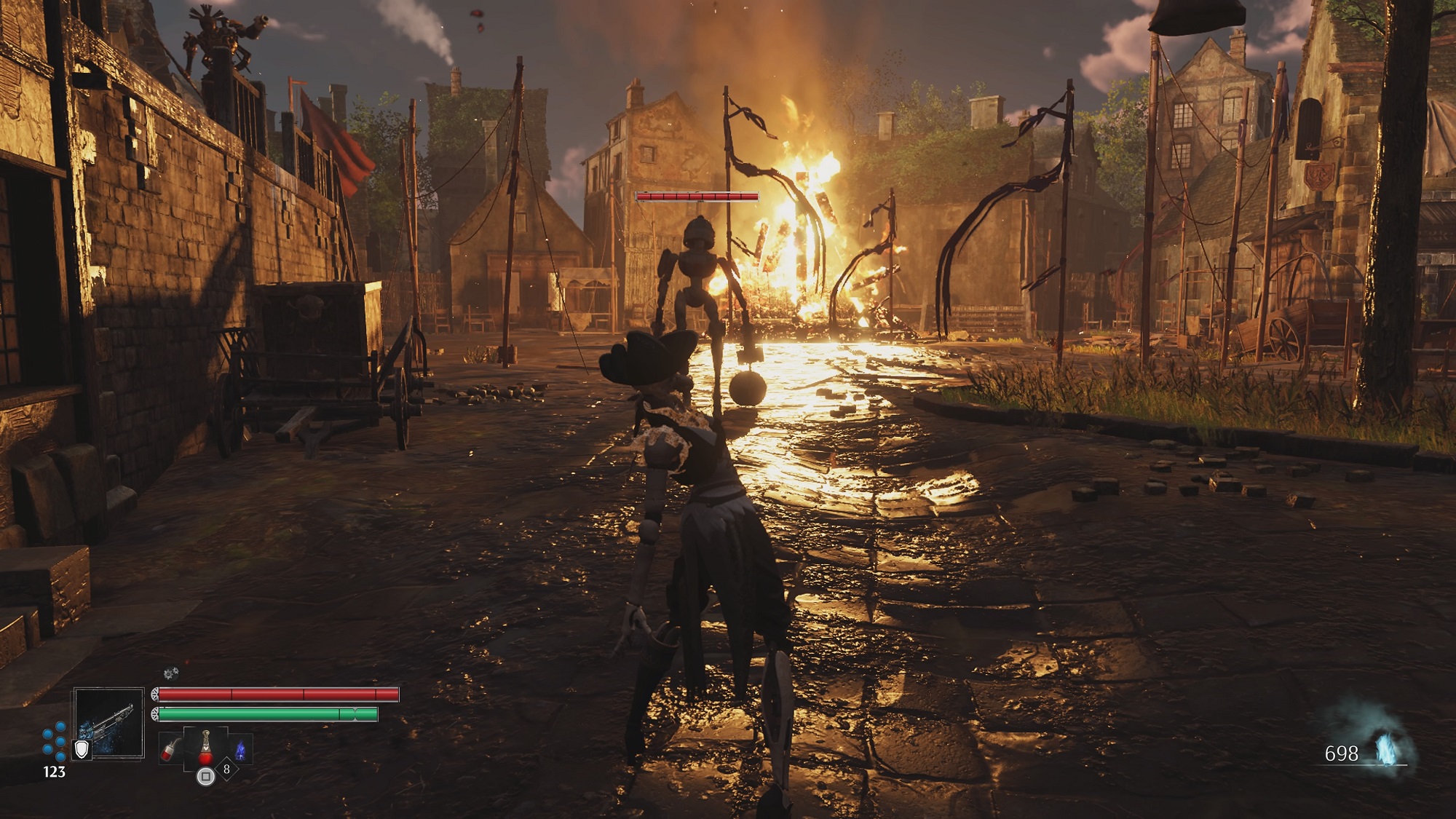 When your protagonist is an indebted roboservant, you run the risk of alienating the player due to a lack of character relatability. Blank-gazing automatons can feel a little flat, after all.

Fortunately, Aegis is a marvel of design, as achingly beautiful as she is painfully deadly, with a surprisingly engaging personality despite her dry, staccato line delivery. Aegis is no 2B of NieR fame — her gears and cogs crunch and grind as she runs, her engine sputters and chokes, and her vocal tone is reminiscent of the “What is this thing you call “‘love’?” lore of old-school sci-fi. But despite — perhaps because of — her fundamental flaws, we like her. We like her very much. Additionally, a selection of customization options allows us to tune Aegis’ design. This includes her skin tone. An important touch, even for automatons.

As Aegis, the player journeys through several quarters of Paris, each defined by its own style, atmosphere, and variety of intriguing — and very dangerous — enemies. The automatons themselves are a veritable circus of iconic 18th-century design, from rickety, inelegant, sword-swinging guards, to fanciful trumpet-playing clowns, frightening feline scouts, and bulbous, heavy-hitting giants. In typical Souls fashion, each of these enemies is a legitimate threat to Aegis, and must be closely studied for its vulnerabilities, so that our girl may strike hard, fast, and with finality.

Evening the odds, Aegis can head into battle with a variety of bladed and blunt weaponry including swords, polearms, chains, fans, and mallets, as well as firearms and rudimentary explosive devices. Each weapon has its own range of weak, fierce, and charged fierce attacks, as well as special skills including aerial strikes, parries, or shielding options. In addition, “Anima Essence” (XP) can be spent on increasing a given weapon’s statistics, or on upgrading Aegis herself, affording her a stronger moveset, better armor, elemental resistance, or fine-tuning for her offensive and defensive animations.

Ultimately, the player is encouraged to build “their” Aegis, from her abilities in battle and her aesthetic presence, to her internal build, weapons of choice, and her decidedly dapper robo-fashions. 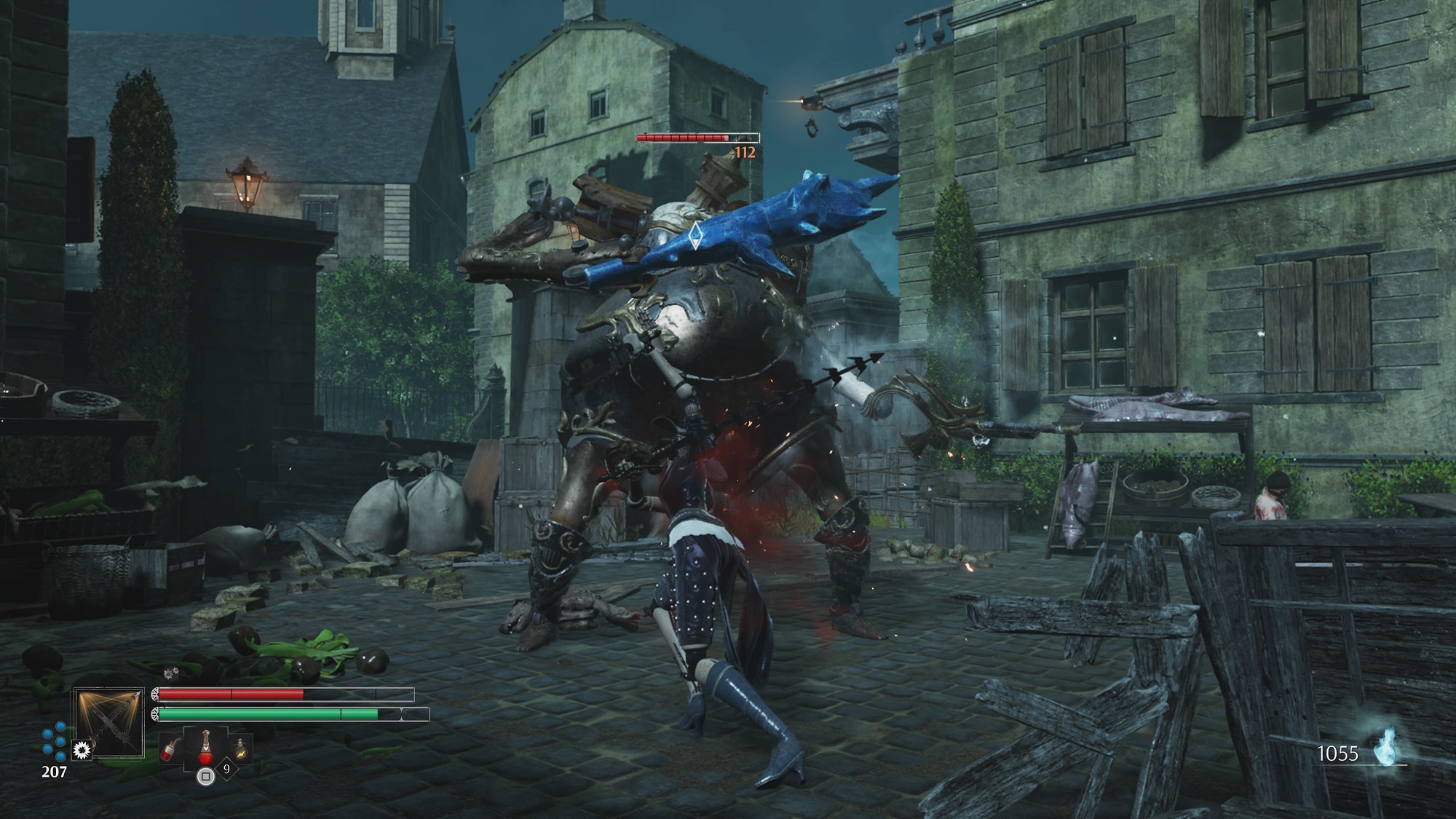 As I noted in my review for another mid-budget Soulslike, Thymesia, control and combat are the beating heart of the genre. The core of any given example’s gameplay experience. In this regard, Steelrising is, unfortunately, nothing to write home about. It is solid, but it is not great. It is precise, but it’s not polished. Controls can feel a little sluggish at times, and even unresponsive on occasion, while the game’s lock-on system, (which is a “Must Use” feature), can be woefully unreliable and cost me more than a few lives. Aegis, by design, is balletic chaos, a finely-honed machine of death that moves with all the grace and beauty of a dancer, but this wondrous design simply isn’t reflected in Steelrising‘s mechanics.

When cornered, or when fighting several opponents in close proximity, Aegis is less Battle Angel: Alita and more Metal Mickey, stumbling between PoVs while the camera dawdles behind a nearby hedge. Steelrising‘s combat works. It’s solid and it serves. But it falters under pressure, with lock-on fumbles, spinning camerawork, or obstacles posted frustratingly just out of frame aren’t on a player’s side. As a rule of animatronic thumb, Steelrising‘s combat mechanics are acceptable, but in a genre that requires scalpel sharpness, they need a little tweaking, lest Aegis break down like yer boy Moyse on Twitter last week.

Perhaps hoping to corral players who do not sport the required Souls Sadist Streak, Steelrising features a clever “Assist Mode” option. This feature can be used to fine-tune the difficulty to your own personal level, with sliders available for enemy damage and endurance regeneration speed, as well as an option to retain all unbanked XP on death. I found that the Assist Mode offered excellent training wheels while I got to grips with Steelrising‘s function — switching it off once I’d cleared the first chapter. Steelrising also features three console modes, tuned for Performance, Resolution, and Graphics. I chose Performance for my playthrough (and for these screenshots) because I like it when video games play.

Oh, there is also a toggle for “Hat Visibility,” which I want to see in every single game from now on. 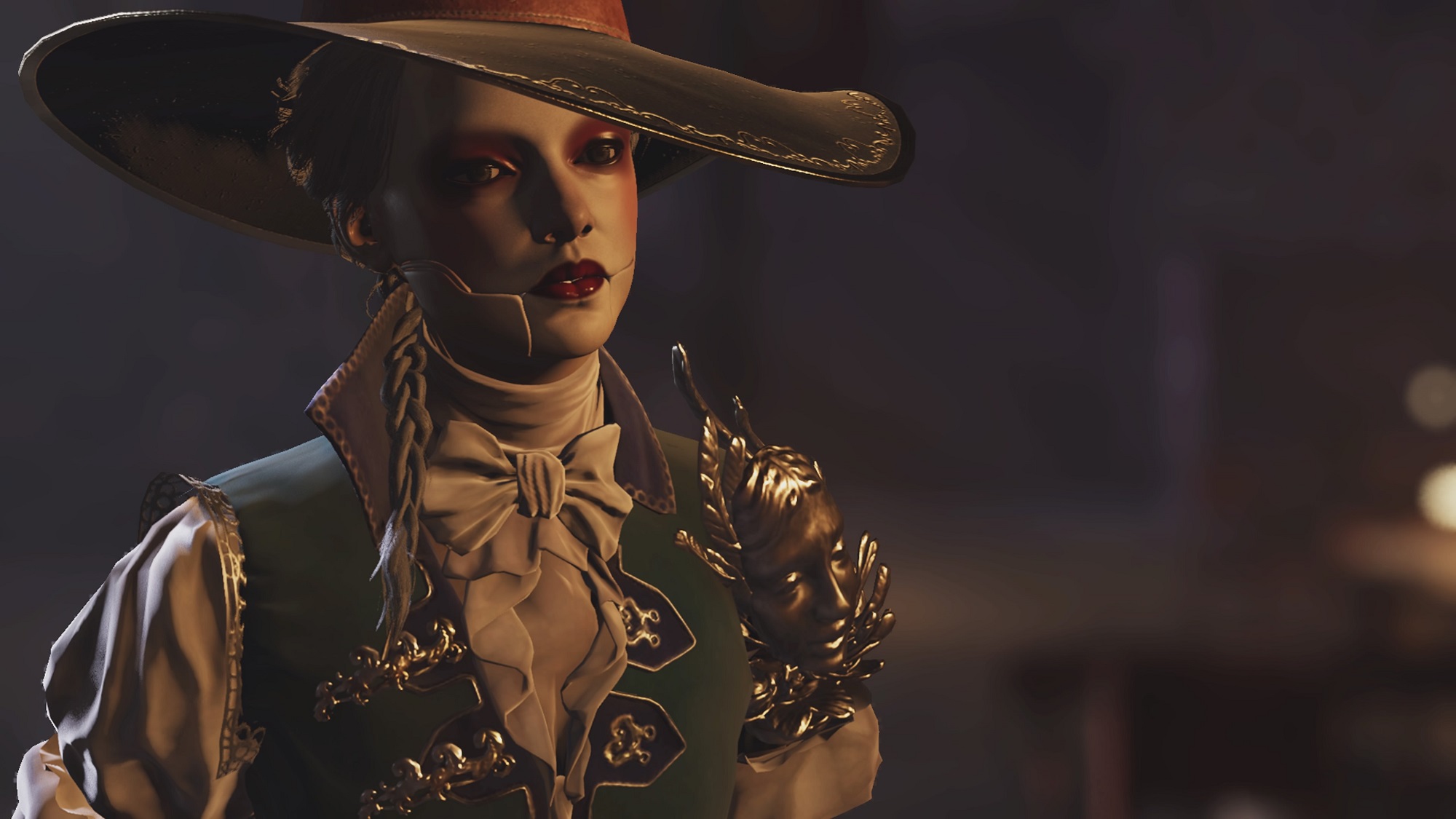 Steelrising looks marvelous. From shadow-strewn woodland, mud-filled ghettos, and palatial estates to the carnage of The Bastille itself, Spiders’ masterful eye for exterior locations — honed in the equally attractive GreedFall — is in full effect here. Sharp lighting, shadow, and other effects bring each location to life, while smartly shifting moods give each quarter its own distinct vibe. One moment you’re taking in the opulence of The Lourve, and the next you’re headed to Luxembourg, where the game goes full horror. In addition to the environmental design, clever concepts such as the Horseless Carriage, the “Vestal” checkpoints, and Aegis’ death-dealing weaponry will please steampunkers.

Add to this Steelrising‘s cavalcade of memorable and disturbing automatons, (yes, of course there are arachnids), and there’s no doubt that both historical concepts and slick visual design are assuredly Spiders’ strong points. This is a studio of ambition. An ambition that often outweighs budget, mind, but ambition nevertheless. Even when Steelrising disappoints, it works to win back the player with a creepy new enemy, a haunting vista, or a satisfying instrument of destruction — ready and waiting to be brought down on the noggin of a sleazy conservative bastard.

Steelrising, ultimately, plays tug-o-war with the player, repeatedly swinging between “alright,” “good,” and “great” on an hourly basis. Some of its design is disappointing, such as the clunky menu system, a genuinely funny mechanic whereby Aegis converses with NPCs through closed doors (likely due to a lack of character models), and an emphasis on rooftop traversal with a character that… well… isn’t exactly Ezio Auditore. Most shockingly of all, Steelrising lacks a French dub, meaning that the dialogue proffers London East End accents for its peasants, while the aristocracy relies on the time-tested “half-language” gimmick:

“Mon Dieu, I do not know what it is that we shall do next, c’est fini!”

“Calm yourself, Maitre, maybe this automaton will adiez nou.” 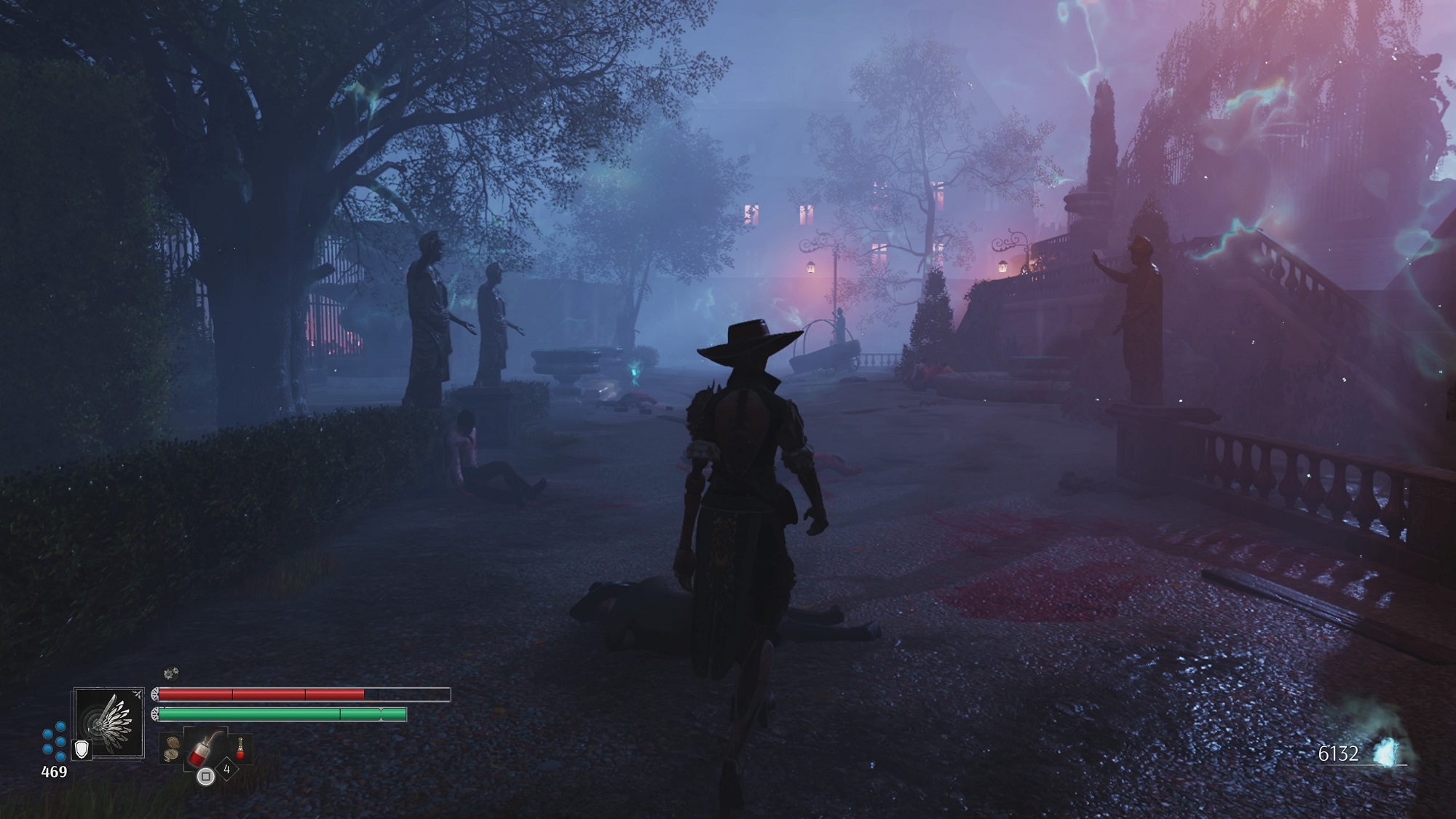 So, here we are on jour du jugement dernier, and where does Steelrising stand?

I’ve personally been looking forward to this title since it was first revealed in the summer of 2020, and while I will admit that the final product is not quite the game I was hoping for, I still found it an enjoyable and challenging action RPG, despite its disappointments. We’re not looking at your newest Souls obsession here, but Spiders has made a solid and agreeable title. Anyone with an interest in Steelrising‘s classy aesthetic and interesting take on history will enjoy guiding Aegis to her rise to glory, standing proud and tall over the aimless meat bags that make up the human race. Vive la robolution!

Though slightly wanting when compared with its Souls contemporaries, Steelrising still offers up challenging combat, inventive enemies, and an attractive and atmospheric take on 18th-century Paris at a time of great upheaval. Much like its previous release, GreedFall, you can see Spiders’ ambition, passion, and talent at play here, and while the final product is not quite the success it could have been, Steelrising‘s robot revolution is still worth its weight in cake.