If you were alive in 2002, you may remember Steel Battalion for the original Xbox. To many gamer’s dismay, it required a special giant $200 controller and a priceless amount of mental fortitude, making it one of the most unique games of last generation.

Flash forward about ten years — the long awaited spiritual successor is about to drop. It’s Kinect-only. Most of the unique technological features and settings are dropped in favor of a “grittier”, Call of Duty-esque theme. Are you already seeing some early warning signs here?

When you start the campaign, your character bends down to pick up a broken piece of the mech you’re about to pilot — this is basically a metaphor for the entire game. 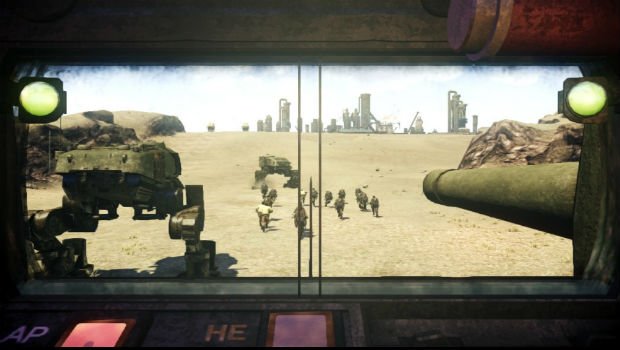 As previously stated, Steel Battalion: Heavy Armor is a Kinect-only joint that uses a controller in tandem with Microsoft’s high-tech camera.

Now, I have a decent size basement, and plenty of room to play Dance Central 2 with both my wife and I. To maximize my experience, I cleared out the room and placed a chair in the middle of it. I was able to calibrate my motion tracking sitting and standing settings in-game. So far, so good.

Upon piloting my mech (which are called Vertical Tanks) for the first time however, the game’s control issues become immediately evident. Simply put, the fact that they’re required is absurd, because they absolutely do not need to be, for reasons that become clearer the further the game goes.

First off, you have to sit up straight while playing (no slouching!). If you want to have less issues, this is non-negotiable. As you can imagine, it’s very awkward to sit up straight constantly during gameplay — especially when games are supposed to be a relaxation tool for some people. While this isn’t a deal-breaker, pretty much everything else is.

Posture aside, the main problem is switching between the game’s two points of view. Basically you’re in a jalopy tin-can mech with three other co-pilots in your default view, looking at your instrument panel — you start every mission in this same manner. In order to actually see outside of your tank (to you know, move, or shoot anything), you have to put both of your hands in front of you to “grab” the panel and pull yourself forward.

This motion never works consistently, and the controller itself (which the game says you need to hold, as both movement and firing are done from it) even blocks your hands from the sensor sometimes. This basically means that in the heat of battle, you’re putting your hands in front of you back and forth constantly just to see/shoot/move, and go back to view your instruments.

Once you make the motion to utilize the viewport, you don’t have to specifically keep holding your hands forward, but you can easily move in/out of it accidentally, depending on where your hands are at all times — so basically, not only do you need to sit up straight, but you need to babysit your hand placement as well. This wouldn’t be so bad if it actually worked, and you didn’t have to constantly move in and out of your viewing area to mess around with pointless switches and gadgets like the HVAC system. To make matters worse, a large AP shell will cause you to shake out of your viewport, which means more two-handed masturbation while fumbling a controller.

The other big issue is that you are required to physically stand up for a lot of sections to pop open the hatch and periodically check out the action. This is a cool idea, but constantly has motion issues, and again, actually looking around is done with the controller, which can hinder the Kinect’s sensors. It also means you need even more playing space, because the Kinect needs to detect your head before you’re allowed to play the game (and every time you get up to use the bathroom or whatever, you have to recalibrate this). 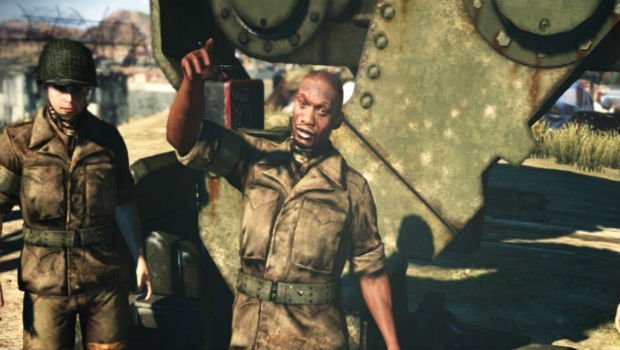 My breaking point came around Mission 5, which forces you to stand up, and scout for an enemy platoon. After about thirty seconds I found said enemy unit, and was told to “make sure I give the signal so my unit can start up the engines” — except the game doesn’t tell you what “the signal” is. I pressed every button, waved my arms around like an idiot, and even tried to vocalize something for the Kinect mic — nothing. Eventually we are getting shot at, and then my engine-guy decides to start it up. After that, you have to “juice” the engine yourself by holding your right hand down, grabbing a lever, and pulling. Even though I had been doing this fine the first four missions, for some reason my Kinect shat itself and it wouldn’t do it.

After getting killed four times (having to wait for the enemy unit to show itself from the very beginning of the mission each time), I had to go do something else for a while. Eventually, I figured out the mission, and was able to continue on my way. But shortly after that, I had another similar experience that severely impaired my ability to enjoy the game.

Kinect isn’t entirely to blame here (as I’ve had plenty of good Kinect experiences since buying it at launch) as much as the design choices involved. Unfortunately, there is no voice control capability whatsoever; either to augment the experience, or provide an additional control scheme. To add insult to injury, you may be having issues as a result of a false positive when calibrating. To be clear; the calibration tool can be deceiving. Sometimes if you’re sitting too far away, the game will correctly calibrate like nothing is wrong, leaving you to guess whether or not everything is fine. After you’re unable to grab a pivotal lever and suffer an untimely and frustrating death because you’re not immersed in the game’s perfect conditions, you may not be inclined to keep playing. 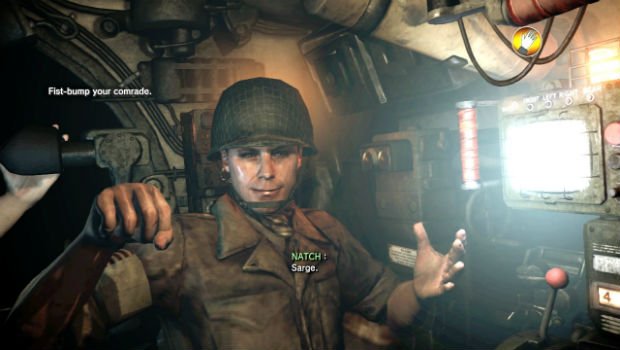 I could have fixed this entire scheme with one simple design philosophy — allow the player to turn the Kinect off. Simply allow the left analog stick button-click to move the player in and out of the cockpit (a button that is not used, mind you), and by pressing the right analog stick, allow the player the option to select certain instruments — done and dusted. Utilizing voice commands to bark orders at crew-members (thus not forcing you to wave your arms around) could have also helped immensely, and helped drive the “crew unity” point across much more effectively.

Even then, if you put all of this forced control nonsense aside, you’re greeted with one of the most generic games of all time. All of SB:HA‘s characters are literally stereotypes, including the “aww sheeet!” token black guy and the “haha you must be a virgin… loser!” New York guy. Even the loading screens remind you of the shallow supporting cast, such as the “proud Native American who eventually embraced his heritage”, or the “OCD young female”. The story is fairly terrible (like a World War 3 Kojima fanfic gone wrong), and the art direction is non-existent, as it’s basically a very simple “Army” aesthetic.

The game attempts to have you “connect” with your crew through “fist bumping and hand shaking” Kinect motions, but it falls completely flat due to how unlikable pretty much every character in the game is. Also, these simple movements are often plagued with the above tracking problems. 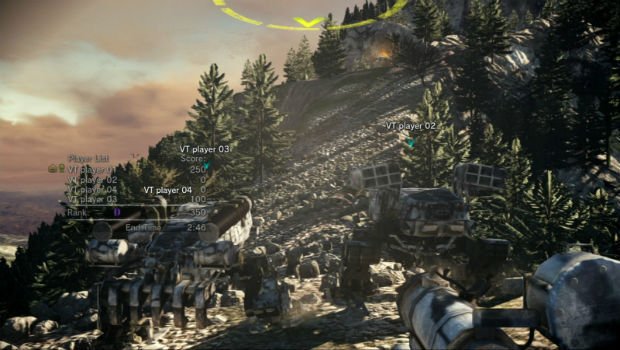 For those who feel like putting up with the game’s controls, there is a full coop feature for up to three other players for some missions. By playing coop you’re able to unlock new VT parts, so it’s in your best interest to look for people as much as possible. Everyone pilots their own independent Vertical Tanks, and in the few coop sessions I was able to test, I had no latency issues.

All of the above issues are quite a shame — I liked the original Xbox title (giant controller and all), because it worked. All I had to do is push a button and it did what it needed to do. It was extremely non-user friendly and had some questionable design choices, but ultimately it was beatable, and unique for the time.

Heavy Armor on the other hand isn’t unique in any way. At its core, it’s a basic mech game with a “realistic and gritty” feel to it that you’ve seen a million times before. Maybe at some point, the Kinect requirement can be patched out of it. Until then, piloting these Vertical Tanks even while sober may result in a loss of brain cells.