Something you won’t forget

Generally, I tend to avoid both adventure and horror games, which makes my attraction to STASIS a bit perplexing, since it’s both of these things. I’ve been invested in the game’s development for years, anticipating its release. A big part of that was in its visual style; I’ll play just about anything with an isometric view.

If you’re a fan of either genre, or if you’re just a fan of well-crafted games, STASIS needs to be on your radar. 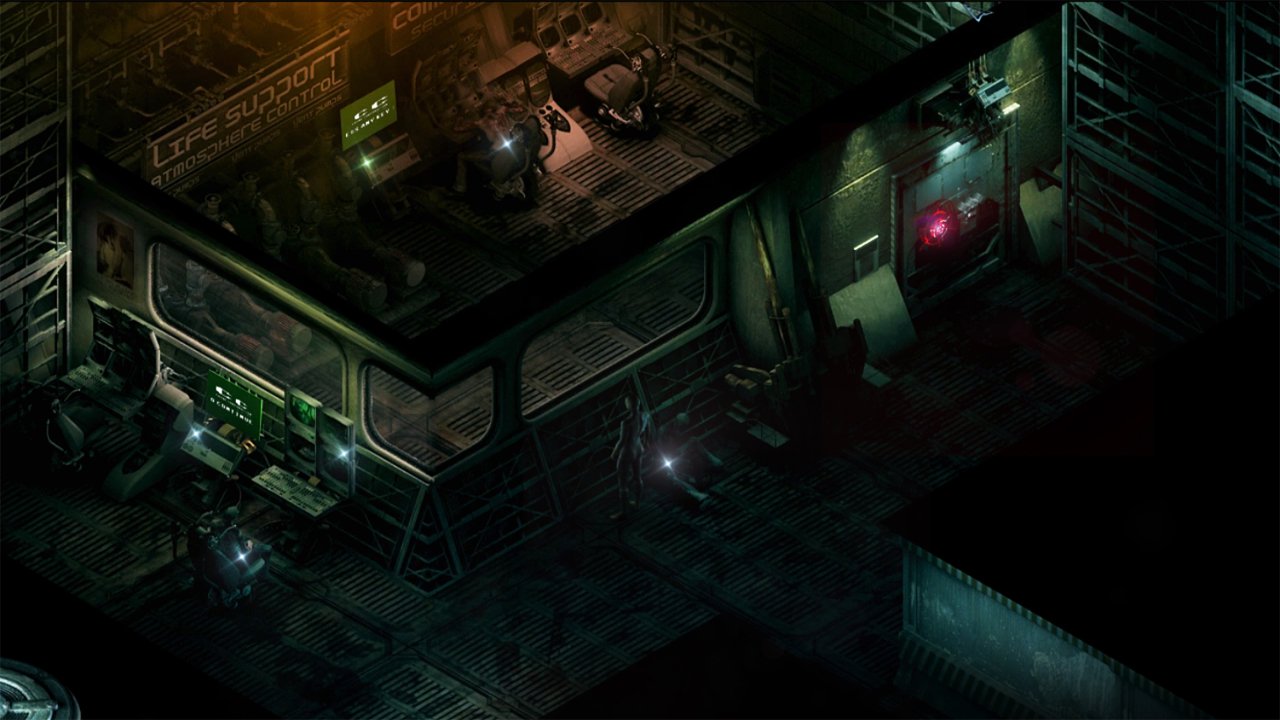 The story begins with the main character, John Maracheck, woken from a stasis (heh) pod on a spaceship called the Groomlake. It’s immediately obvious that something big has happened here, as there is broken machinery, plenty of bloodstains, and no one around. John sets out to find his wife and daughter, in addition to finding out what the hell he’s doing here in the first place.

I won’t spoil anything further, but what follows is a grim and morose tale that will certainly leave an impression on the player. As the story begins to unfold and more elements of the Groomlake’s history become clearer, players shouldn’t be surprised if a sickening feeling washes over them. There are scenes in STASIS, especially towards the end of the game, that I’m not sure I’ll ever forget. The only way I can think to describe them is: fucked up.

And that is the kind of “horror” that STASIS sets out to achieve. The game doesn’t just throw jump scares at the player in every scene; instead, it builds an atmosphere that will make players uneasy. There are a few jump scares, but they actually work because they’re infrequent and unexpected. This is a true horror game: creepy and unsettling, with scenes sure to embed themselves in the player’s mind, whether they like it or not.

Much of the plot is told through PDA journal entries found around the ship. These entries are well written, and players will find themselves excited to find new ones. Entering a room often reveals quite the scene, and as players read the PDAs, the events that transpired in the room come in to view. All of a sudden that blood splatter or broken machinery makes perfect sense.

The biggest issue the plot has is pacing. For someone who figures out all of the game’s puzzles with relative ease, the pacing is great. For those like myself, however, who struggle with classic adventure game puzzles, the pacing can fall apart quickly. In general, I suck at figuring out puzzles in adventure games. That being said, I managed to get through most of STASIS‘ puzzles without struggling.

When I did struggle, however, oh boy was it rough. After spending over an hour trying to figure out what to do, the game’s atmosphere and themes crumble away, and the I began to look at it from a mechanical point of view. “Okay, what haven’t I clicked on yet,” or “which item haven’t I tried to use on everything yet?” are signs of desperation and even frustration. At that point, the creepy background sounds and eerie music were just noise and I was furiously clicking on everything in hopes that it would work.

For players who end up at this point, I have a few tips. First of all, make sure you’ve read everything. Many times, hints are offered through various PDA journal entries or in the mouse-over descriptions of things. Read them carefully! Always try to combine items, and use items on just about everything. Finally, if you’re truly stuck, look it up! It’s better to keep moving with the story than to spend hours banging your head against the wall, hoping for the best. Shoutouts to my Destructoid colleague Stephen Turner for helping me through some of the harder puzzles; that guy is a rockstar.

With the exception of those few obtuse puzzles, most of them range from very obvious to “just the right amount of thinking.” As mentioned, hints are almost always available to those who are observant enough, even though some don’t come off as hints initially. Piecing together these clues feels great, and solving most puzzles provides a strong sense of accomplishment. 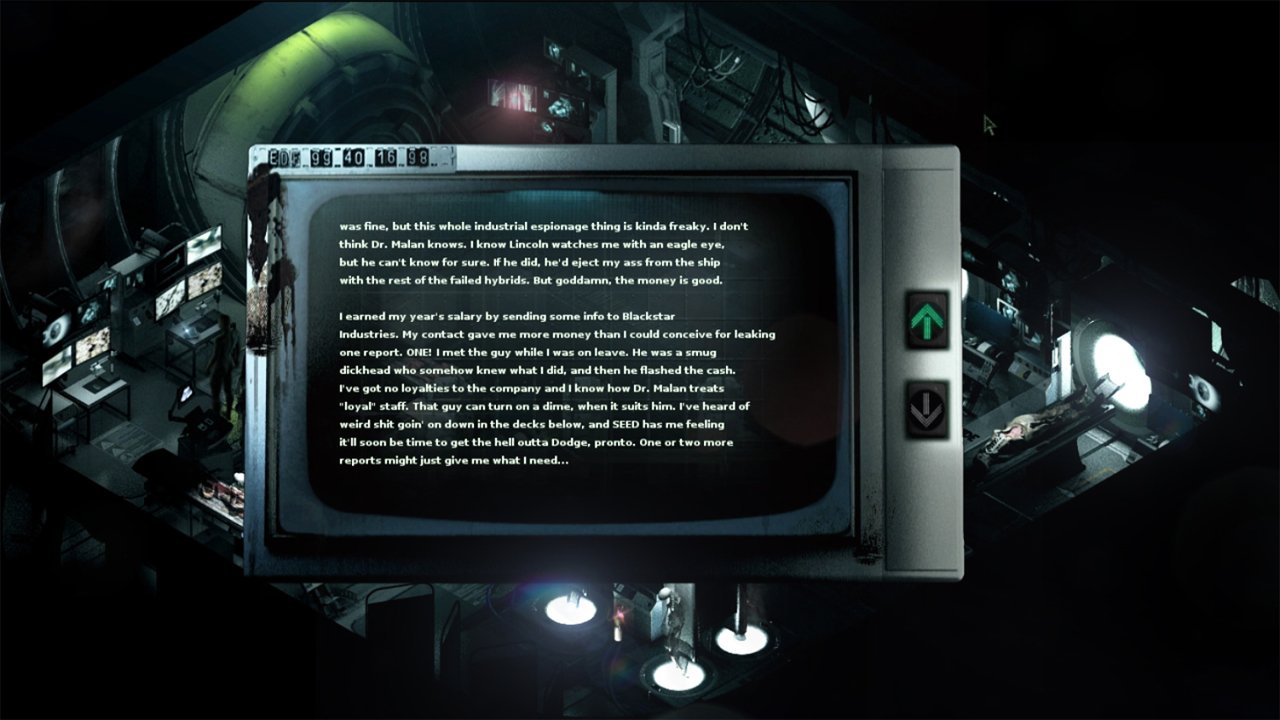 The game takes an interesting isometric perspective, similar to RPGs like Baldur’s Gate or Planescape: Torment. The view cannot be zoomed in or rotated, so what you see is what you get. This is probably for the best, since the game uses a fairly low resolution and zooming in would not be pretty. It isn’t always easy to see where to exit a room, so it’s best to hover the mouse over the edges of each room to find all of the exits.

Objects that can be picked up or PDAs that can be read have a glint of light, signaling to the player that they should click on it. This helps alleviate the “pixel-hunt” that many adventure games suffer from, though not completely. While interactable items sparkle like a gem in the sky, environmental objects do not. I did occasionally find myself slowly scanning my mouse over an area to see if I had missed something to click on.

While this is inconsequential, the pathfinding in STASIS is a little wonky. Often times John will take the longer route to get to an item instead of the obviously shorter one. Some of the animations are also a bit funky; certain movements don’t quite line up with the surrounding environments at times. Both of these have no gameplay impact, but they can break immersion and remind the player that they’re playing a video game.

The model for John also stuck out as odd. He’s completely dark, like a shadow. Other character models seem to have some texturing done, but John…doesn’t. Even when in a room with plenty of light, John stands as a dark figure. It comes off as unfinished, though it seems to be a deliberate choice. 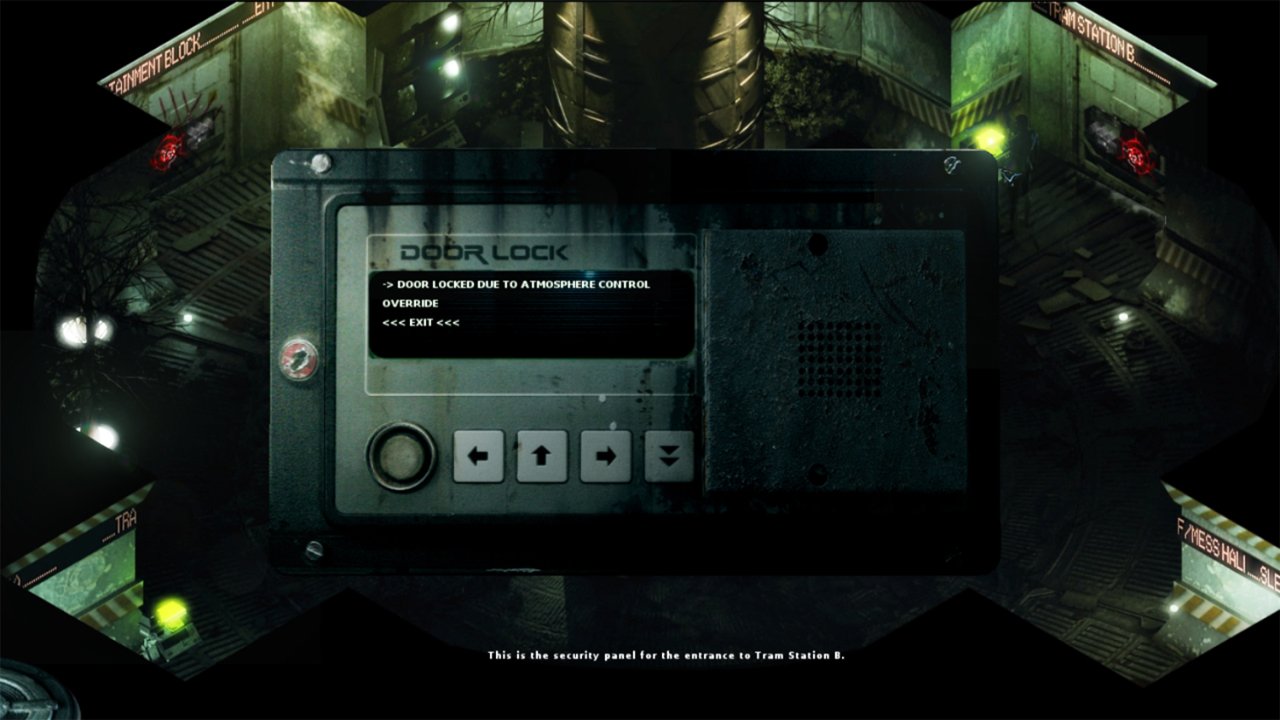 The sound design, however, is top notch. Various background noises easily take front stage at times, making an already creepy room into a downright terrifying experience. Sound effects after interacting with specific objects are downright perfect, and make me question the lengths that the developer went to to get such sounds.

STASIS is one of the most memorable experiences I’ve had from gaming in quite a while. Some puzzles can be frustratingly obtuse, but the majority are a pleasure to solve. The game will take most people between six to ten hours to complete, depending on puzzle-solving skill, and just about every moment is sure to stick with the player in some way. STASIS is a game that is not to be missed by anyone craving an eerie and sinister experience.