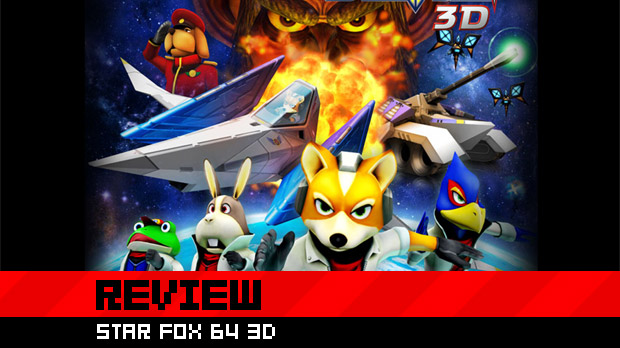 The N64 is my least favorite console of all time, but I still feel the need to own one, mostly for Star Fox 64. It’s easily one of my favorite games on the console, way ahead of Super Mario 64 and Ocarina of Time. That’s partly because those two titles were 3D adaptations (and in some ways, deformations) of already near-perfect 2D experiences I’d grown to love on the SNES.

As a huge fan of Mario and Link’s SNES titles, seeing characters that I’d grown to love as colorful, detailed 2D sprites transformed into chunky, low-texture polygon models felt like a huge downgrade. Star Fox on the SNES was already as chunky and low poly as it gets, so by comparison, Star Fox 64 looked amazing. The game fully embraced the technical limitations of the N64 by crafting a world where it made sense for everything to be made from basic geometric shapes.

There was no attempt at realism, or recreation of sprite-based characters; just N64 graphics doing what they do best. Like with the Katamari Damacy games, and now Minecraft, Star Fox 64 presented a world that was built from the ground up to be made from simple shapes. That’s just the start of why I love the game.

Now Star Fox 64 is back on the 3DS, and once again, the game adapts to the strengths and limitations of its destination console, and make them work in its favor. 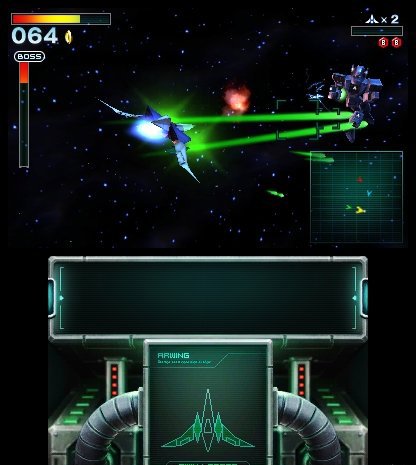 Like Ocarina of Time 3D before it, Star Fox 64 3D stays true to its source material, but boasts vastly improved graphics and tons of new features. I’d argue that Star Fox 64 3D is the better of the two revamps, but that’s mostly because Star Fox 64 is source material more suited to the 3DS. The game is basically about violent animal Muppets that are constantly engaged in Star Wars-style air and space battles, carelessly killing each other with wanton abandon.

There is a giant disembodied monkey head scientist named Andross who may pose some nebulous threat to the galaxy, but none of that is really talked about after the brief opening narrative exposition. This is basically Crud! Get this Bozo off my tail so I can blast some monkeys and/or monkey-shaped robots out of the sky!: The Game, and it’s just as timeless a concept as it sounds.

Star Fox 64 3D is a 3D shmup. Throughout the game, you generally fly along a set path, though there are a few bits where you can chose your own course, or fly around a designated area as you please. The game focuses on tasking the player with alternating between offensive and defensive play maneuvers. Each level has a multiple environmental hazards, requiring a strategic, well-timed use of speed boosts, air-breaks, and flips. Fail at these tricks, and you’ll end up smashing into something large and/or explosive.

On the offensive side, you need to always be working to destroy enemy ships, objects in the environment — ranging from Star Destroyers to giant space clams — and just about everything on screen at all times in order to max out your score, and sometimes find hidden areas and power-ups. More advance players will work to charge up their attacks and fire at specific enemies to set off chain reactions among multiple enemies. The offensive side of Star Fox 64 3D is sort of like the recently released XBLA/PSN title Galaga Legions DX, but in 3D, and with stressed out, bloodthirsty chicken men and androgynous frog people leading the charge into battle. 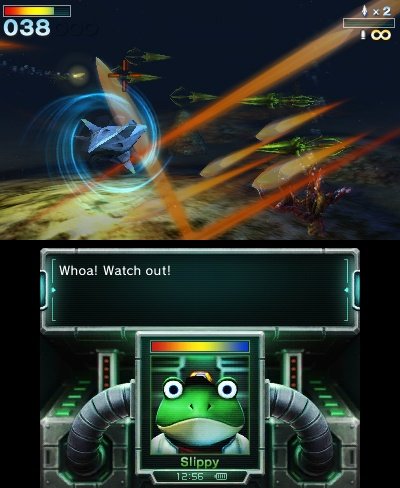 Like I said in the opening paragraphs, the game looks great and plays well to the 3DS’ strengths — particularly the glasses-free 3D, which is a perfect fit with the game’s focus on depth of field. Most objects are still built from a fairly low amount of polygons, but the textures, lighting, and transparency effects do a lot to make the game look impressive. The game also knows how to suddenly change gears and display fairly complex-looking, gigantic, highly detailed polygon models.

The player will quickly get accustomed to blowing up simple abstract shapes, only to suddenly get accosted by a “realistic”-looking giant skeleton crab boss, or a wet and weird lava man. It should probably feel jarring to change styles like that so drastically, but it doesn’t, largely due the consistently great art direction throughout.

It would be totally irresponsible of me to not spend at least one paragraph of this review discussing the game’s music. Like the John Williams scores it draws from, the soundtrack of Star Fox 64 3D works wonders at making ridiculously impossible events feel emotionally real. You’ll feel genuine responsibility when your giant rabbit buddy tells you he’s about to get his ass blown to bits (not his exact words) unless you get those bogeys off his tail.

This clearly silly situation is made to feel important, largely because the music supplies the gravitas with no expense spared on drama. This works throughout the more emotional moments, which range from being mocked by a seemingly Deliverance-inspired pig man, witnessing flirtations between a cat lady and a blue bird guy, to even a (spoilers) lifesaving family reunion toward the end of the game.

Though these moments feel like half-parody most of the time, they still have some genuine emotional weight, largely because of the musical score. Like most of the 8-Bit Mega Man titles — and just about every Mario and Zelda game — Star Fox 64 3D would not be half as fun if it’s soundtrack had been replaced with lesser music. I’ve already spent much more time with the game’s sound test mode than I expect Nintendo had intended. 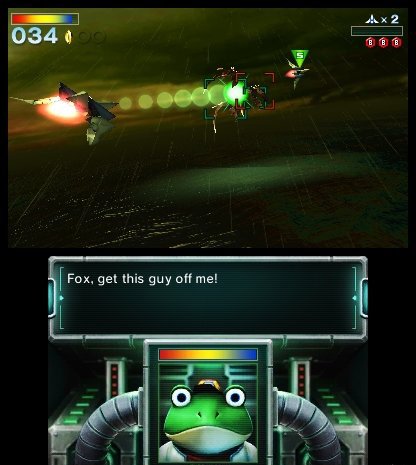 Star Fox 64 3D is much shorter and easier than I remembered, which shows that though the game feels timeless, it hasn’t aged quite as well as I imagined it would have. Compared to other Nintendo-published 3D shmups like Sin and Punishment 2, Star Fox 64 3D lacks challenge, and is all too brief. There are two levels of difficulty, one based on the original N64 level design, and the other custom tuned for the 3DS. I found both difficult levels to be relatively easy, and was able to beat the game twice in less than three hours.

Thankfully, Star Fox 64 3D is a game designed to be played multiple times. It’s packed with branching paths that hold many surprises, including a couple of tank-based levels, and even an underwater stage complete with a submarine. I don’t think it’s possible to see every level in the game without playing it through at least three times.

There are tons of unexpected, almost random conditions (saving your friends, defeating bosses in a set amount of time, destroying various environmental hazards, etc.) that determine what path you’ll gown down. You won’t figure most of them out on your own, requiring a lot of trial and error, or more realistically, some research online. On top of the branching paths themselves, the specifics of each level will change based on what order you play them in.

Remember that flirtatious cat lady I told you about before? Well, she won’t show up to make time with the blue bird man unless you beat the proceeding stages in the right order. Tiny details like that go a long way to making the supremely silly world of Star Fox 64 3D feel real, and supply the player with the small incentive necessary to boot it up again and again, long after you’ve seen both of the game’s two endings.

One of the new features in the 3DS remake is the ability to control your ship using the 3DS’ gyroscopic controls. Unlike in Ocarina of Time, the gyroscopic controls here offer no real advantage to the standard analog nub set up. There is nothing wrong with them, and those who have extremely poor fine motor control may dig the option, but I got nothing out of this unwieldy new mechanic. 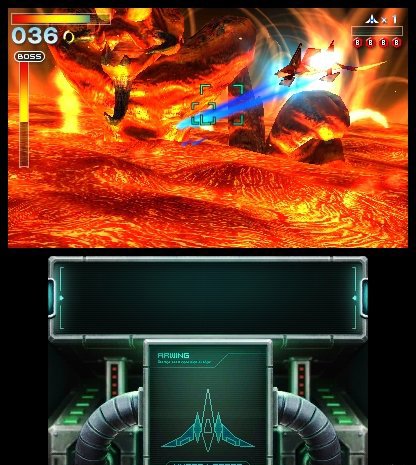 I did get a lot out of the option to play the game in various languages. Hearing Peppy Hare tell me to do a barrel roll in French is way more fun than it has any right to be. I also really enjoyed the game’s multiplayer mode. I didn’t expect much from it to start with, but after just one round, I quickly learned that it’s more than a tacked-on extra.

Even playing against the CPU was a lot of fun. In multiplayer, the game plays a lot like Mario Kart‘s battle mode, but in space, and with guns. All four players are thrown into an arena, with randomly generated “?” block power-ups spread throughout the field. There are tons of new weapons here, like a cloaking device, a teleporter, a giant vortex laser cotton ball thing, some highly lethal floating space-mines, and more.

Playing this mode alone offered quite a challenge. It’s much tougher than the game’s main campaign. On the other hand, playing this mode with other people is an exercise in playful sadism. Using the 3DS’ camera, you can get a good look at your opponents’ faces as you blast them out of the sky, or better yet, betray a fragile alliance you might have formed with a buddy by farting a well placed space-mine directly onto their face.

I know Nintendo could have put this game online –but ultimately didn’t — for reasons only they understand. Still, that doesn’t diminish how much fun local multiplayer is on its own. Thankfully, you only need one cartridge to boot the game among multiple players; so as long as you have one or two 3DS-owning friends nearby, you’ll be all set. 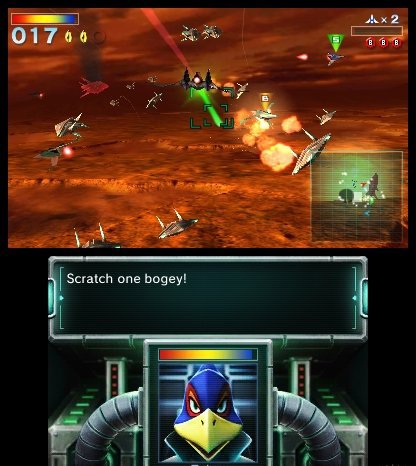 Star Fox 64 3D is a great little package, more than worthy of a purchase for fans of the genre. It lacks the scale and scope of Nintendo’s other big N64 remake, but it’s arguably a more compelling experience for shmup junkies like myself. The game is constant action with no filler; just constant dog fighting and high-flying arial maneuvers, with a bit of jaw-flapping, Muppet-y fun layered on top.

With multiple rewards for achievements and high scores, loads of secrets to unlock, and multiplayer that screams “One more game!”, it won’t be hard to convince yourself to replay this one again and again.