I will take any opportunity to play as an animal in a video game. Let me control a dolphin, a wolf, a shark, or even a tiny little mosquito and I’m happy. As you surely already guessed, Rite of the Shrouded Moon puts the player in the body of a spider. Not just any spider, though. This game is all about jumping spiders, which is one of the more terrifying qualities an arachnid can have.

Spider is probably not suited for the more arachnophobic gamers among us, but who knows. You might just find that you enjoy being a spider more than being in the presence of one. 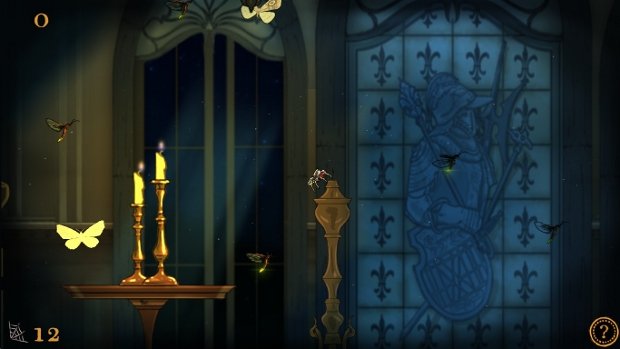 Spider is primarily about eating insects and getting high scores. You play as the titular character in a large, seemingly abandoned estate, and come equipped with all of the skills a real spider would have. It can cling to almost any surface, move around very quickly, jump incredible distances, and spin webs to trap prey. Playing as a speedy, acrobatic hunter feels really great, and the controls are very responsive and precise. But on top of the slick web-slinging gameplay, there’s also an underlying puzzle game hidden in the recesses of the estate for players who want to delve a bit deeper.

The core gameplay is simple enough to learn the basics very quickly. Basically, jump from one surface to another while spinning a web to start building, and try to create geometric shapes which will be filled in automatically once completed. These webs will trap passing insects, which can then be eaten for points and more silk to spin more webs. Eating multiple insects without leaving the web will increase a combo meter, but the combo will reset to zero once the spider touches any other surface.

Gameplay leaves plenty of room to develop new skills and strategies to maximize your score. Combos remain as long as the spider is touching a web, so you can try building multiple webs to jump between to keep the combo going. More points are earned by eating smaller insects first and saving the larger and rarer ones until the combo meter has built up a bit, so figuring out which insects to catch and eat in which order can drastically alter your score.

Different insects require different strategies to eat them. Most have to be caught in a web, but some will need to be led into the web somehow and some can only be caught in strong webs. These strong insects might destroy webs that are too weak, releasing any other captured insects in the process. Other insects can only be killed by being tackled, such as hornets and ants. These have a separate combo meter which runs out in ten seconds unless the spider tackles another insect to keep it going. Just jump into them to eat them. No webs necessary! But be careful, because some of them can fight back. 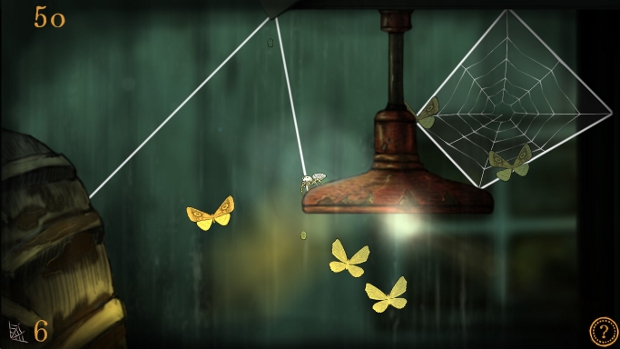 Spider also has an interesting time and weather mechanic. The game detects your location and mimics the current time and weather in-game, between four different scenarios (clear day, rainy day, clear night, and rainy night). You can choose to opt out of the location services as well, in which case it just uses the developer’s location. It also tracks the current phase of the moon if it’s a clear night.

The time, weather, and moon phases all affect gameplay in different ways. Certain insects only come out when it’s daytime or while it’s raining, and some areas can only be accessed during certain weather conditions. Sometimes, the level will feel completely different between night and day. For example, one level in the barn is filled with a normal variety of flying insects during the day, but at night it becomes infested with hornet nests, totally changing the way you play it. My only complaint is that I felt some of the levels could have used more obvious differences between the various time and weather scenarios, but for the most part there was a good variety.

Then there are the moon phases, and this is where the underlying puzzle game comes in. While roaming the estate as a spider, you’ll come across secret areas and clues pertaining to certain mysteries. Many of these clues can only be found and solved if special requirements are met, such as playing during a new moon or at night while it’s raining, although some of them can also be completed whenever. Solving mysteries will unlock more areas to play, and the game cannot be truly beaten until all clues are found and the final mystery is solved. 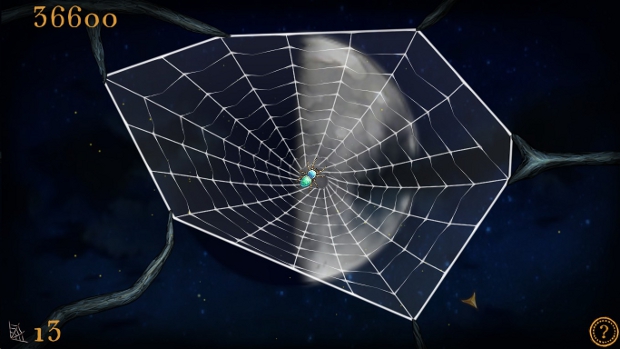 While time traveling and altering weather mechanics is an option for those less patient players, Spider is really meant to be played slowly over a period of time. Try playing at different times of the day to find new stuff. Or if it starts to rain one day, then try to find some time to jump into the game and see what all has changed with the gloomy weather. Once you start finding clues, you can begin to synchronize your gaming schedule with the phases of the moon and plan out certain nights to return to the game to check on something. Eventually, as the month goes on, you’ll start to unravel the mysteries of the estate.

Or, if you don’t care about all that, there’s still the incredibly fun web-slinging, insect-catching action to focus on, which should be more than enough to keep you engaged. I’m sure some players will be more involved with achieving high scores and climbing up the leaderboards than trying to solve riddles and look for clues. Either way you choose to play, it’s still a great game.