Bandai Namco has a lot to answer for after 2012’s Soulcalibur V. After gutting the beloved core cast and a number of single-player modes the series felt hamstrung, to the point where some felt that it could never come back.

When in doubt, put a Witcher in your game (or a Jedi, or a Hero of Hyrule, or an assassin, or Hellspawn, or…you get the point). 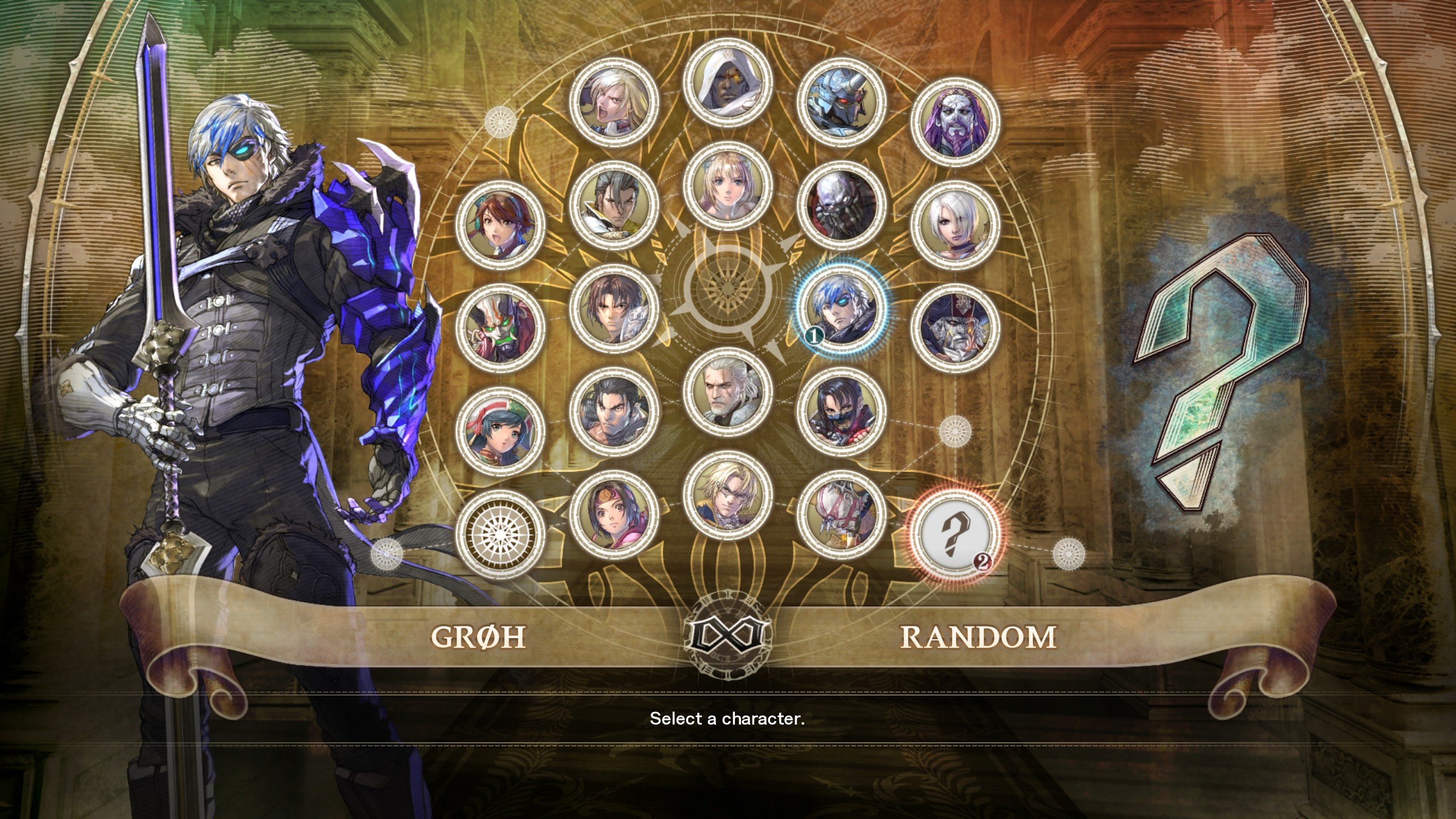 Soulcalibur VI rights a lot of the wrongs from six years ago. It’s still absolutely gorgeous inside and out with an appropriately regal soundtrack that’s so incredible that I often just leave it on as I’m making a sandwich or preparing for a match. It ticks all those boxes. But it also steers the ship back in the right direction for casual and hardcore fans alike. Let’s start with the cast.

Although a few classic characters are missing, VI mostly hits the mark and brings back several no-shows from V, like Sophitia and Talim. There’s a great balance here without having to resort to clones As for the new crew: I absolutely love the decadence of Azwel, the “Leader of Humanity.” He’s an edgelord and a perfect fit for a game that already held the edge crown with Nightmare. Project Soul is embracing their inner silliness here. His blue and red hues kind of codify Soulcalibur VI‘s loudness. His odd mixup-based fighting style, comprised of counter-like maneuvers, ranged attacks, and heavy-hitting close-quarters combos makes him a welcome addition.

Grøh is shonen incarnate, and although he’s perhaps the least impressive new fighter on paper, there’s still merit to his inclusion. Grøh’s “single blade that splits into two” gimmick has been done before, but the way Soulcalibur stylishly executes it is something unique to this series. He can use his avenger stance to separate the swords at will outside of a combo and utilize a ton of movement-based abilities to sneak around the arena. The more I played with him the more depth I discovered. He’s in the waiting room of the lab right now, but as more tech is discovered I may bring him into the fold.

Geralt from The Witcher series is a fine (and relevant) guest character. While the idea of Yoda spinning around with a lightsaber is anachronistic enough to turn people off, Witcher‘s medieval focus is inversely grounded. Geralt’s style is based around “signs,” which can basically be considered spells. He’s kind of an all-comer mid-ranged character and should appeal to just about any fighting game player regardless of their familiarity with the source material. Quen (a sign that lets Geralt rush down an enemy while putting up a shield) is a great example of an ability that will speak to new players (and Soulcalibur in general allows for many answers to projectile spam/zoning with its aforementioned freedom of movement). I’m going to use him to introduce people to the game.

The character creator is off the chain, offering scores of races that completely veer off course from the typically human-centric notions of old. Lizardmen, mummies, skeletons, sculptures, goblins (Malefics), cyborgs (Automatons) and demons (Darksiders) are fair game. You can even kit one of these oddities out with a “narcissistic” voice that proclaims they’re beautiful before choosing one of 20 fighting styles based on existing characters. It pretty much rules and I was immediately inspired to create my own Wack Pack of creatures.

Their main use here is in the Libra of Soul mode: an RPG based on the create-a-character system. It’s lore-heavy with dialogue choices that are mostly fluff, with custom character creations to fight. It has its own narrative, world map, item system, and customization options. It’s awesome as it really manages to feel like its own game: like one of many elements you’d find in a ’90s fighter like Ehrgeiz. 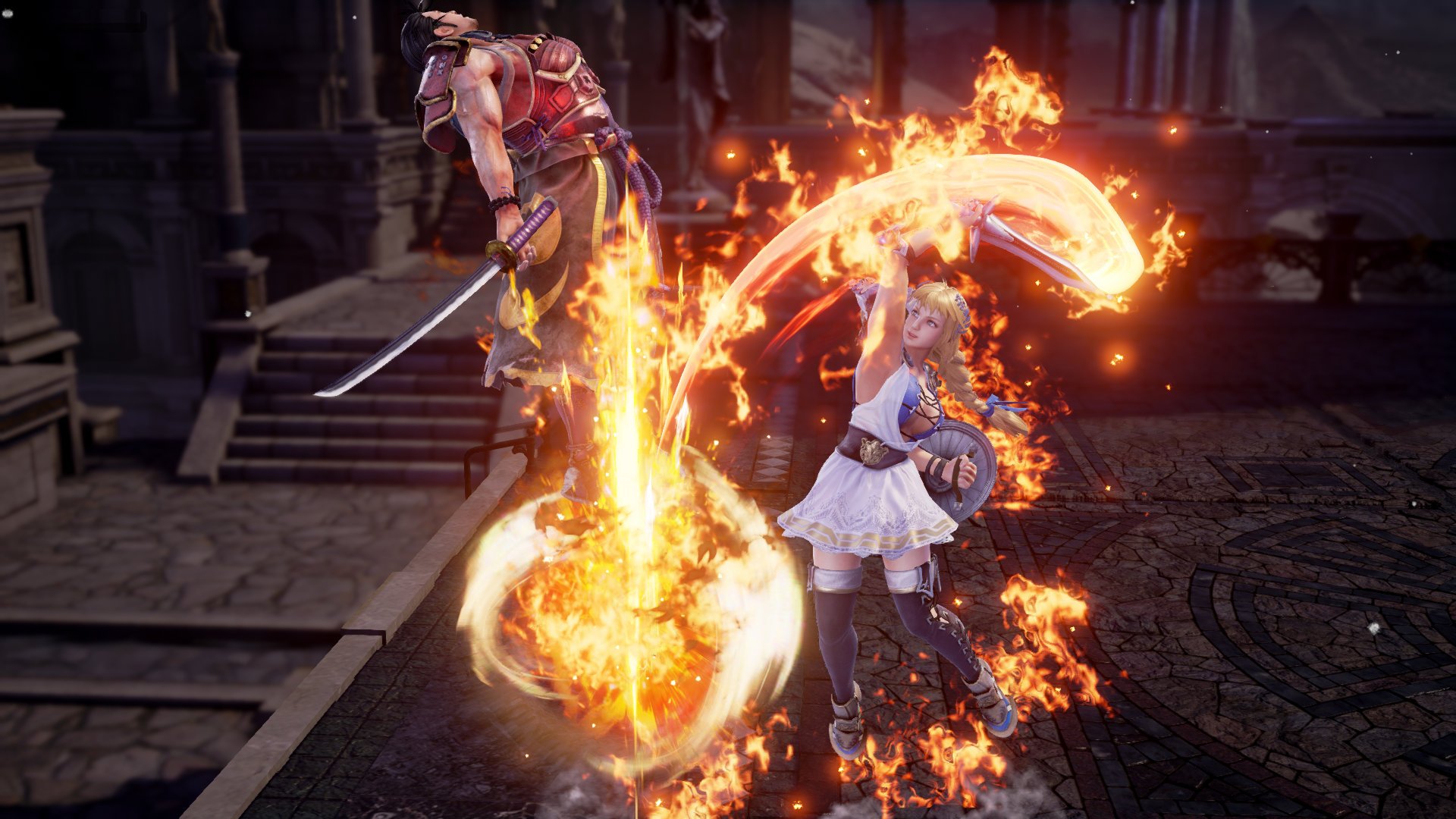 Despite not changing a whole lot Soulcalibur is still relatively fresh in the fighting game circuit. To this day there still aren’t many weapon-based fighters. It’s a challenge, absolutely, to balance reach, power, and a ton of frame data around weapons, but Project Soul has done it time and time again. Making positioning matter is also another Soulcalibur staple. With ring-outs and multi-directional movement the stakes are often higher, and there’s pretty much a counter for everything.

Which leads me to the big new thing: the reversal edge. Think of it like a parry — a swift way to push back against an onslaught after it’s finished. Successes will initiate a slow-motion rock-paper-scissors standoff (A, B, K to be exact) similar to Injustice 2‘s clash system: but much more complex with the added bonus of being able to quit out with guard (G) or dodge and with character-specific nuances. It’s snazzy and will lead to a lot of shouty moments in pro play. Plus, reversal edges can be countered with block-busting break attacks or merely by canceling a combo and dodging the obvious big red flash.

If you’re completely lost the training mode also doubles as a tutorial, with tomes of information dealing with mechanics and a theatrical playback of each and every move: so you can see them as they should have been. They even break down individual characters to see if they’re right for your playstyle. Between viewing their animations and reading hard data on what exactly it is they do I was able to pinpoint a few new mains. 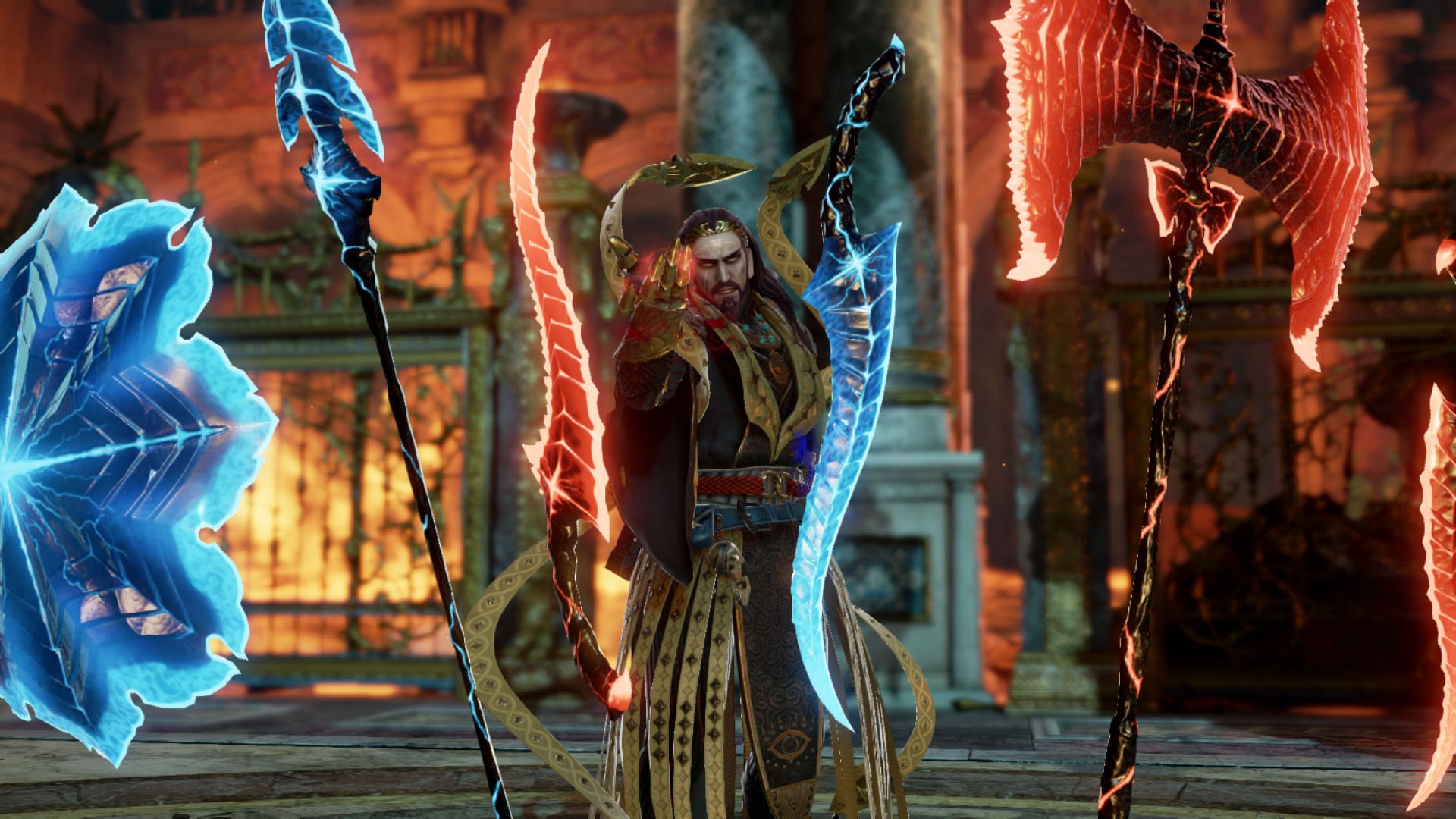 Soul Chronicle is the heart of Soulcalibur VI and functions as a sort of all-star mode. It’s a road trip of the past from the original through the third game, but it doesn’t make the mistake of foisting brand new characters onto you. It’s genius: come back from a lengthy hiatus with a storyline that works as a refresher of sorts without rebooting the franchise and pissing off long-time players. It also incorporates created characters, including ones you’ve made yourself!

It’s a great way to jump into Soulcalibur for the first time without feeling completely lost. Full voiceovers for both Soul Chronicle and Libra of Soul (including the option for English or Japanese voiceovers) help pull back from the corner-cutty feel of V. Arcade is also back just in case you’re wondering (it’s sad how that need to be confirmed these days but so be it).

I still remember sitting down for the first time to play Soulcalibur on the Dreamcast and hearing Jeff Manning’s voice echo across the room. This is a larger-than-life series that deserves a lot of love and care from its creator: and with VI, it got it. The recent documentary that openly acknowledges the past faults of the series gives me hope that Bandai Namco is going to right the Soulcalibur ship.

[This review is based on a retail build of the game provided by the publisher. Online play quality was not assessed in this review but will be covered as the game launches if anything is awry.]