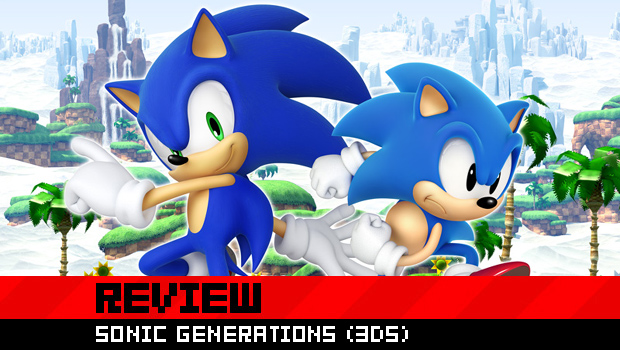 Full disclosure: before playing Sonic Generations (3DS) for review, I had never finished a Sonic game. I bought all the collections and rented or bought used copies of all the Wii titles because I love the series in theory. Sadly, in practice, the games always wear out their welcome before I see the ending credits.

I love the risk/reward equation of maintaining speed, which offers a higher score, a more exciting experience with the level design, and a higher risk of failure, but the way it’s implemented in most Sonic games is extremely uneven. You’ll take hits all the time from enemies that you’ll never see coming when you’re at full speed, which will encourage you to play through the stage slowly. Playing the stage slowly is, of course, less fun. Any game that encourages you to have less fun playing it is doing it wrong.

That’s the problem with the 2D Sonic games. The 3D Sonic games fix that problem, but the tradeoff is usually clumsier platforming, the sense of being on rails, and general sense of feeling a false connection with the game world.

So yeah, that’s why I don’t finish Sonic games. I did finish this one, though. 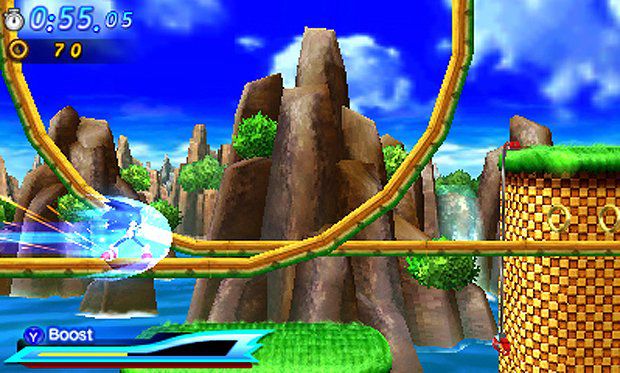 Like its big brother on the PlayStation 3 and Xbox 360, Sonic Generations on the 3DS is a game about classic Sonic and modern Sonic doing some stuff before they abruptly stop doing that stuff because the game is over.

There is more to the story than that, but I can’t imagine why anyone would care; the game’s cutscenes are by far the worst part. They pop up every time you clear an area with both modern and classic Sonic, featuring Sonic and pals talking in front of a white background about things that are completely worthless. There were a few cute parts, but yikes, I was really put off by the game’s attempt at narrative.

I was also not charmed by most of the opening levels. They are quite dry and free of any interesting design ideas, especially the “classic” Sonic levels. Again, I love the economy and elegance of classic Sonic’s minimal moveset in theory, but in practice, his earlier levels quickly boil down to “hold right and press jump as soon as you see a pit or an enemy.”

At least modern Sonic has the lock-on attack and the magic ability to shift the camera behind his shoulder to mix up the action and keep from having too many obstacles hit you without a fair warning. 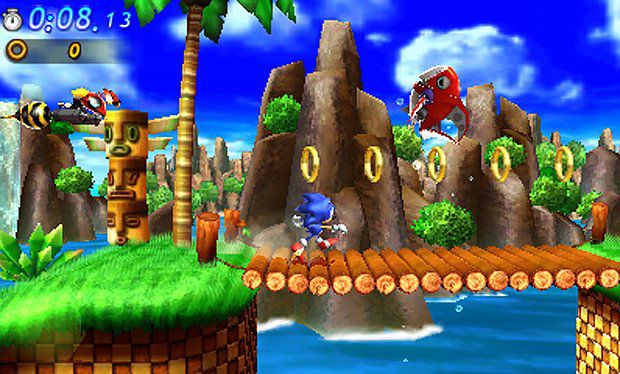 Then you reach the first boss fight, and it’s totally anti-climactic. First comes a race against a Sonic clone that involves (you guessed it) holding right and hitting jump whenever there is a gap or an obstacle. After that, you fight a big robot that required you to not be standing next to it when it attacks and for you to jump up and hit its weak spot. There is a little bit of clever design there which requires you to change directions mid-jump in order to hit that weak spot, but other than that, it’s bleh.

And don’t even get me started on the fact that sometimes falling into a pit or into water will kill you, but other times it doesn’t. Any game that can’t even keep its own rules straight suffers from amateurish design. Sure, there are sometimes signs there to tell you what pits or pools are dangerous, but that shouldn’t be necessary. Just like a great film shouldn’t need a lot of voice over to tell its story, a well-thought-out game shouldn’t need to use signs to tell you what aspects of the environment are hazardous. 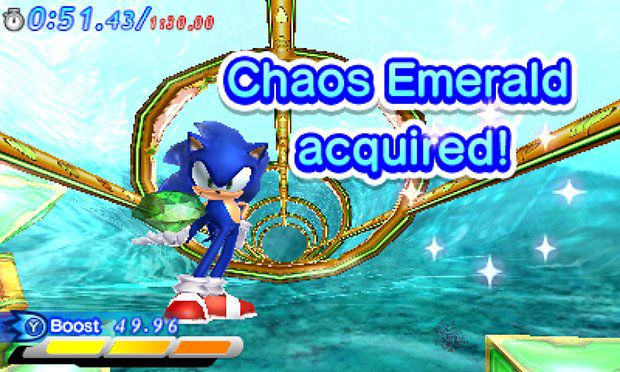 Compared to all that, the optional 3D-styled Chaos Emerald bonus levels seem amazing, even though they are really just average at best. I had a genuinely good time with them, but if they had been thrown in a more fun game, they might have seemed like a low point. Nothing really happens in these stages (you just run, hit speed boosts, and dodge obstacles), but at least you feel a great sense of speed without being unable to see most of the obstacles in front of you before it’s too late.

Thankfully, things get a lot better from there for the main game. After that first boss fight, classic Sonic learns the homing attack, which helps his levels become varied. You also get more set pieces, gimmicks, and traits of Sonic’s later games, like Sonic Rush and Sonic Colors. The inclusion of the Wisp power-ups in the Sonic Colors level went a long way in making it fun, though I couldn’t help but wish that the rest of the game was more interesting. The music in the Sonic Rush level is also amazing, in a very Jet Grind Radio sort of way (Hideki Naganuma worked on the soundtracks for both games). 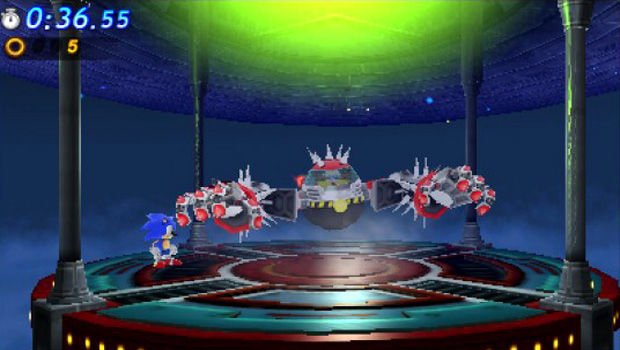 The graphics are also pretty good. It’s about how I would have expected the Wii port of the PS3/360 version of the game to look. The 3D also works pretty well, even though it feels a bit wasted on the game’s 2D gameplay engine.

Can you tell I’m trying to say nice things about this game? Because I totally am.

Even when little things like that pop up to make Sonic Generations more compelling and involving, the general Sonic problem remains the same —  running fast and pressing jump right before you hit an obstacle gets old sometimes. When the camera zooms out and you get a decent chance to see what’s in front of you, like in the remade or classic “run from the Orca” scene from Sonic Adventure, the game can be a lot of fun. When you random randomly fall on your head out of nowhere in a stage based on Sonic Adventure 2, it is not a lot of fun. 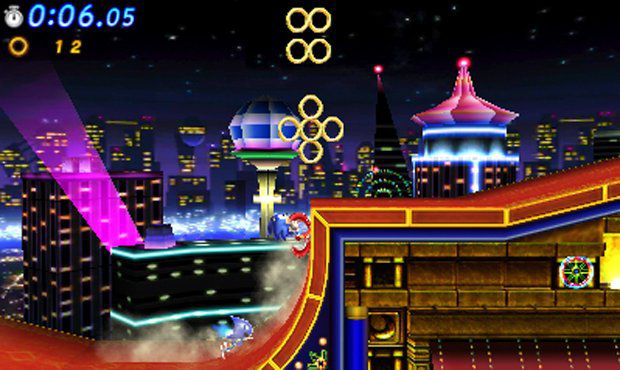 As for the other bosses, there aren’t that many of them, and they aren’t very good — two more races, a couple of QTE-style fights, and you’re done. The game is also really short. Other than some tough stages in the middle and one near the end, most people wont have to replay much of the content. It will all probably be over for you in four hours.

This all adds up to an experience that feels like half of a fairly average game, and seems particularly lame if you keep in mind that 3DS eShop titles like VVVVVV and Mighty Switch Force offer similar levels of content for a fraction of the price. Sonic 4, a downloadable game, might even have more content than this $40 title. I wouldn’t know, because I haven’t beaten Sonic 4, but it still might.

One area where the game really shines is the bonus content. There is a nice online mode where you can race against an opponent in any stage, and it’s a good amount of fun for a quick rush of competition. There is also a mission mode that tasks you to replay various stages while completing certain requirements, like killing X amount of enemies in X amount of time. If you felt relatively lukewarm about the game in the first place like I did, these bonuses won’t mean to much to you, but if you enjoyed the game the first time around and are looking for an excuse to continue playing, mission mode will give you hours of extra fun. Same goes for the online ranked Time Attack mode. People who just want to be told to play the game again will probably love it; everyone else will get nothing out of it. 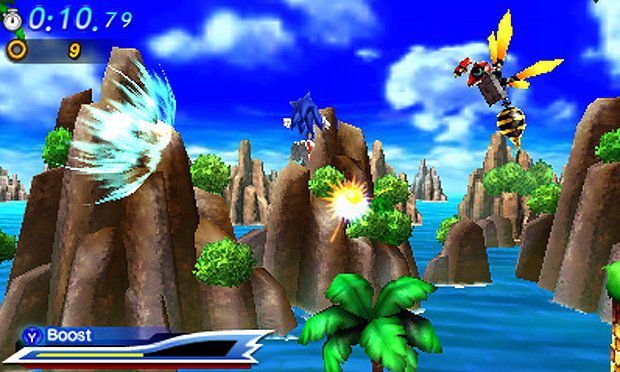 If the inherent flaws found in many of the games in the series don’t bother you, they won’t bother you here, either. I’m sure longtime fans of Sonic will have a great time with this game, but if you’ve never been able to get into the series, it’s unlikely this one will change your mind. While Generations has some high points that I really enjoyed, there are too many low points to recommend that anyone buy it at full price.

In the end, Sonic Generations is not the worst Sonic game I’ve played, but it’s far from the best either. I’m glad that I was forced to play through the whole thing, as there are definitely some clever design choices and cool moments in later levels. It’s just a shame that I had to wade through so many cheap speed-blocking hits and uneventful levels to get to them.