Did you know there is a new Sonic game releasing in just a few days exclusively on the Nintendo 3DS?

I wouldn’t be surprised if you answered no, considering Sega itself has seemingly forgotten this game existed, instead heavily marketing Sonic Mania which doesn’t even have a release date other than sometime in 2017. Even the wildly popular Sonic the Hedgehog Twitter hasn’t mentioned it, though it did retweet when Nintendo did. Fire & Ice isn’t a bad game, despite the Boom part of its name, but it isn’t a great game either, and has seemingly already been forgotten by everyone except hardcore fans. Can’t blame them, though — Mania looks great. 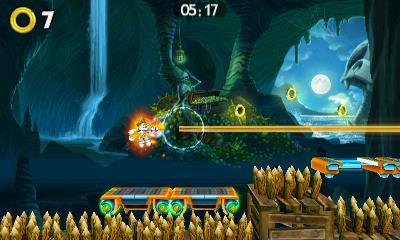 Fire & Ice is a sequel to developer Sanzaru Games’ previous effort, Sonic Boom: Shattered Crystal, which I never played other than the demo. From reading Chris’ review, I can tell you basically all the criticisms he had with the original are no longer present except for cheesy characters and comedy, but I kind of like that about it. While there are tons of collectibles to find, they aren’t required unless you want to unlock extra fluff that doesn’t impact the gameplay, meaning progress is no longer tied to hunting down items.

Also, great news, you can go fast, in a Sonic game no less! However, it doesn’t feel anything like the unhinged speed from the classic games and fast sections are mostly automated once you hit a speed pad or bumper before eventually giving you back control. These automated sections happen frequently in every level, and eventually become so repetitive they no longer feel like a reward.

The plot centers around Eggman mining a newly-discovered mineral which he is using to build a robot to beat Sonic in a race, thus disgracing him into not wanting to show his face in public anymore. Yeah, it is stupid, but the game obviously knows this and owns it; it is the right kind of stupid. Also, canonically, the artist formally known as Dr. Robotnik runs faster than the Blue Blur himself as seen prior to the final boss fight in Sonic the Hedgehog 2, but I guess he forgot about that when he changed his name to Eggman. Somehow at the beginning of the game, Sonic and Amy find a fissure in the ground that explodes and grants them the power of fire and ice, which doesn’t shock them one bit. They seemingly shrug it off. Once Tails finds out, he quickly figures out how to give this ability to everyone, because of course he does. It furthers the gameplay, but you certainly aren’t playing this game for its plot.

I honestly enjoyed the stupid banter between all the characters in cutscenes that were animated and voiced by the same team behind the Sonic Boom cartoon. One scene has Eggman telling a robot to shave his beard because he looks like a hipster, which is just so dumb it is hard not to love. If you don’t like the way the characters are portrayed in the cartoon, then you’re in for a bad time, but I personally enjoy Sonic at his most stupid; chili dogs, anyone?

Visually, the game is bland, even for the dated 3DS. Character models are ugly and undetailed. Stages are dull. My biggest problem with the game is that the scenery of the levels don’t seem to fit the Sonic universe and could have easily been elements leftover or made for other games. I will say I’m not that familiar with Boom outside of the atrocious Wii U game, but I can’t imagine it features castles with swords stuck in anvils with giant rose bushes in the background. That particular level felt like it would be more at home in a Tim Burton or Lord of the Rings game than a Sonic game. By comparison to the classic titles, the levels just look very uninspired and dull. Phoned in, even. 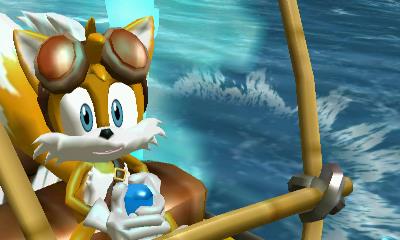 That isn’t to say the actual level layout is terrible, though they all stick to the same formula of “Go right to finish the stage and any areas you can go left is where we hid collectibles.” I stopped caring about the collectibles pretty early on considering they don’t unlock anything more than different hammer textures for Amy, different bots for the racing levels (which requires two copies of the game locally for multiplayer), and behind-the-scenes content from the cartoon.

The big difference here is obviously the fire and ice mechanic, which allows you to either freeze blocks of water or melt them by pressing either of the triggers to switch between modes on the fly. While it works, it doesn’t seem to add a lot to the gameplay. You’re mindlessly switching when needed, which is always obvious. Anything resembling puzzles are marked with the abilities required to complete them. While you can switch between characters on the fly, they aren’t used much aside from levels directly after unlocking them. It seems like most levels are built with Sonic in mind, with only small puzzles that require the others.

The platforming will feel very familiar to Sonic fans, especially those who have played since the start. It combines the feel of the classics with the auto-aiming air attacks of enemies found in the later 3D games. I’ve always preferred the classic turning into a thorny ball when jumping, but at least here it is fun to chain together a bunch of enemy kills in mid-air which is sometimes required to get across spiky pits. Oddly, if you fall into a pit, instead of just dropping rings and being able to continue on, it warps you back to the start of the section, which could be more than a jump or two. This means you won’t always be able to collect your rings again and it ends up making things more difficult. That said, I have a feeling the intended demographic for this game is the kids who watch the cartoon. No part of it is challenging in the least bit. While I wouldn’t call any side-scrolling Sonic games difficult, this one is especially lacking in that department. 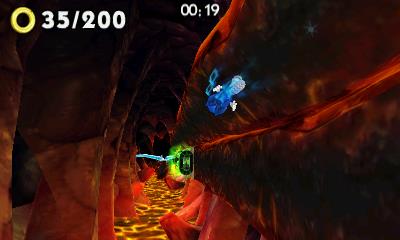 Boss battles, while few and far between, are enjoyable and have you playing as Sonic and one other character whose ability is required for the fight. Instead of swapping on your own, after damaging the boss enough, the characters will tag each other out as if they’re in a wrestling match. Story-wise, the bosses don’t make much sense as they just kind of show up out of nowhere. But who cares when you’re fighting a giant mechanical spider in its web? Not me.

There are three different type of secondary missions to play, two of which have you controlling Tails’ inventions, and one that plays a lot like an endless runner. As Tails, you’ll either be racing through an underwater maze in a submarine shooting missiles at mines and pottery, or racing a boat down a glacier-filled river. The endless runner-like levels has you controlling Sonic in third-person while he automatically runs away from the camera as you dodge obstacles, swap between fire and ice, and collect coins. While these secondary missions add variety, they are completely optional unless you’re a completionist looking to unlock all the extra fluff. I could have done without Tails’ repetitive levels, but the runner bits are at least a little enjoyable.

Sonic Boom: Fire & Ice isn’t the worst Sonic game I’ve ever played. It isn’t terrible. The platforming and sense of speed are here, though just not as fun as you might remember them. The whole affair is rather ugly — which can’t only be blamed on the 3DS, though it doesn’t help — and the game isn’t exactly long at a few hours to complete, if that. Hardcore fans of the series will probably get some enjoyment out of this, but for the full price of $40, it is hard to recommend to anyone else. If you’re desperate for another Sonic game, you could do worse.