I wish Solatorobo was an animated film instead of a game. Once you cut away the mind-numbing crate puzzles, monotonous combat, and maddening fetch quests, there is still a heart and soul to Solatorobo that keeps you from utterly hating it. Instead, you just kind of feel bad for it. You feel bad that it’s part of a medium it seems to barely understand instead of a wonderful anime film.

Porco Rosso‘s fantastical take on Europe and Cowboy Bebop‘s sky pirates are transparent influences on Solatorobo. Nevertheless, developer CyberConnect2 managed to build its own world that stands apart. Despite having a ten-year production cycle, Solatorobo is a rare case of an overproduced, underdeveloped game that is a treat to look at and an absolute chore to play.

Cuddle your furry, because things are about to get ugly.

In Solatorobo, you play as cunning dog Red flying around the world with his adopted sister Chocolat and his mech suit DAHAK. It looks similar to the mech suit from Tail Concerto, which Solatorobo is a spiritual successor to. You even get to see some of the characters from that buried PlayStation action-RPG. While Tail Concerto played like Mega Man Legends, Solatorobo feels more like a Zelda title. You know, without all the good stuff.

Red is a hunter, which pretty much means he’s a badass in a world of useless peasants. As he travels town-to-town in his sweet airship, peasants come up to him and ask him to kill evil, giant cockroaches or whatever. Like a chump, he goes and does it. Red is nice like that. He’s the classic spunky adventurer. Likable enough to stick with throughout the game’s 15 or so hour story, but not memorable enough to stick with you once the game is over. 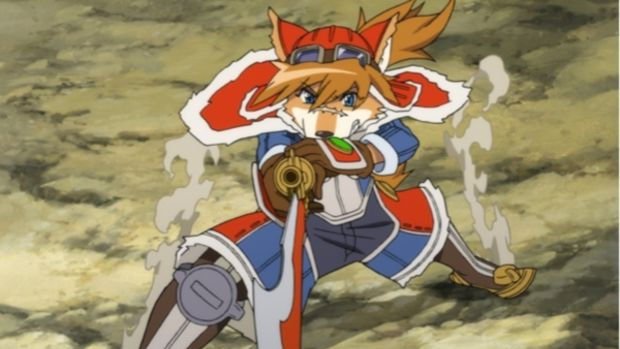 The combat is pretty binary — you dodge or attack. To attack, you pummel an enemy until you can pick them up. Once they are in your robotic arms, you can throw them on the ground, then repeat up to three times for a maximum-damage combo. It’s like spamming the “open door” button in God of War extended across an entire game, and it gets old pretty fast. It boggles my mind that CyberConnect2 takes more than 10 hours to introduce some new mechanics.

Eventually, you gain access to a new suit that grants you some different abilities. With it, you can swing enemies, pound them into the ground for splash damage, or go into Trance mode to shoot projectiles. It doesn’t fix the problem of dumb A.I. and boring enemy design, but at least it’s something. It’s just strange that these features don’t come into play earlier. It’s as if the game knows how shallow it is and holds onto whatever tricks it has in desperation. “No… please wait! You see’ll… uh, you can, like, swing people in about five hours! It’s totally worth it, dude! Please, stick around and play me! Plaaaaaaaaaaaaaaaaaaaay meeeeeeeeee!!!!!” 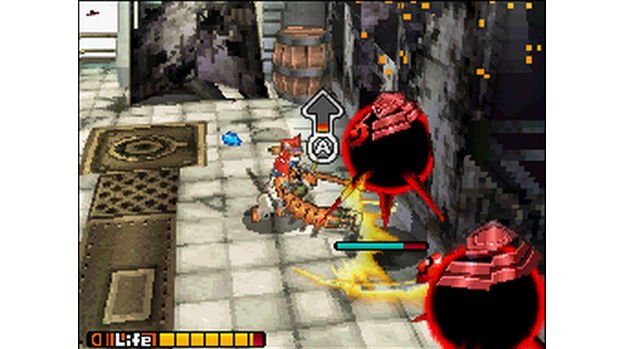 After getting past the first three chapters, I felt insulted by Solatorobo‘s difficulty. I was dumbfounded that a developer would make a game this easy. Unless I’m mistaken, the box cover doesn’t have infants on it. Does the game get harder? I had to know, so I did a quick Google search. It turns out I wasn’t the only one wondering this — European players had the same question months earlier, and they all received the same response of “Yeah, pretty much, I never died once.” This is a problem.

A good game lets a player’s skill progress alongside the narrative. Both the player’s skill and the game’s story should have an arc. A great game pairs them together so tightly that you can feel the protagonist’s struggle. As you left Ravenholm in Half-Life 2, you could almost feel Gordon Freeman’s exasperated gasps for air coming out of you. If I ever felt remotely challenged while playing Solatorobo, it most likely had more to do with the Indian food I ate the night before. 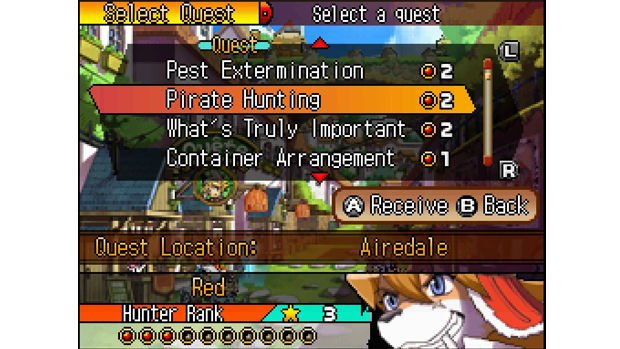 Solatorobo is a game about lifting things and throwing them. Okay, to be fair, sometimes you catch instead of lift, but this only happens on a rare occasion. It’s practically mind-blowing when it does happen, because it usually follows an hour of mindlessly lifting crates and placing them on giant red buttons. Don’t worry! If you are too stupid to figure that out, the characters will tell you. They will literally say, “This is a puzzle… this is what you have to do.”

You progress through the game by taking on quests that lead you into mini-dungeons full of mini-bosses and mini-puzzles. All of which are done with such little effort and creativity that you can’t help but groan in apathy at the start of each, despite how visually different they may be. Whether it’s a mining cavern or a large ship in the sky, you’ll still need to slowly climb down a ladder to flip a switch and beat the boss by throwing its projectiles back at it.

You’ll occasionally come across some mini-games that are hit-and-miss. The fishing game is absolutely terrible. You have to press the A-button rapidly until it’s over and it takes a lot longer than you’d like. However, the air-racing game is pretty great. You can even play it solo or with three friends, right from the main menu screen. 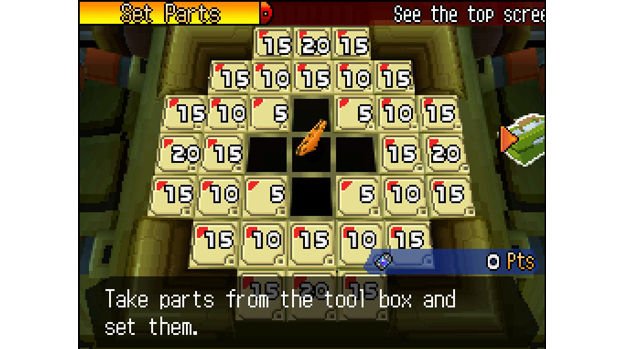 Along with fighting enemies and picking up boxes, you’ll also collect lots of stuff. It’s not quite Donkey Kong 64 amounts of crap, but it will make the OCD-gamer happy in an exhausted/depressed way. You have pigs that unlock pieces of concept art (YES!), plates you can buy that give access to cutscenes (THANK GOD!), and pianos that give access to background tunes (*tears*). You also have P. Crystals — you can tell these things are important because this is an RPG and they are called “crystals.”

While you can level up by gaining experience points, you can also decrease the time it takes to lift an enemy and increase the throwing damage you deal by customizing your mech. No, this isn’t Armored Core — The only thing you’ll be changing is what Tetris-shaped blocks will make up your mech’s interior. Each of these blocks give bonus points to your mobility, defense, attack, or hydraulics (lifting ability). You use P. Crystals to open up more space for placing blocks, which you buy at vendors in town. I never bothered optimizing my mech, because you can get by just fine without doing so — the game really is that easy! I chose to devote all my space towards attack and hydraulics so I could get battles over faster. Now that’s what I call strategy! 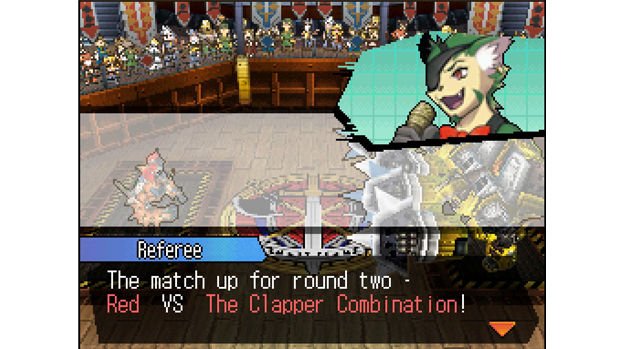 You are probably thinking, “Why are other critics giving Solatorobo such glowing reviews, then?” Don’t worry, I’ve thought it over too. One thing I can’t argue with is Solatorobo‘s lively, detailed world and graphics that manage to impress, despite being on a seven-year-old system. As gamers, we like to explore original worlds that feel believable and mysterious. It’s something rare in the current age of military shooters and the diminishing popularity of big-budget JRPGs. I wish I could celebrate Solotorobo as a whole due to CyberConnect2’s efforts in world-building, but to do that I would need to ignore the game itself.

It’s telling that the Japanese collector’s edition of Solatorobo came with a 94-page art book. This is a game that was in pre-production for seven years and in development for three. The decisions behind the story and backdrops were as thought-out as a Studio Ghibli film, which brings me back to my main point: Why make Solatorobo a videogame? Everything about the dungeons and combat feel like excuses to show off what CyberConnect2 and players really care about: The game’s world. 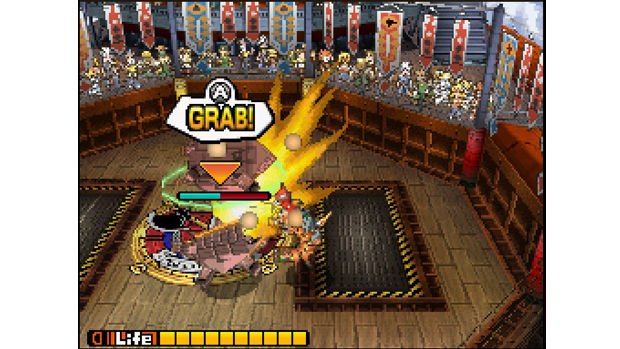 Our trips to the different locales of Solatorobo are too brief to impact us. Each area feels like six-or-so gorgeous, connected backgrounds rather than a world you can believe in. The same can be said of the game’s cast of characters and overall story as well. So as you can see, even this aspect CyberConnect2 couldn’t get completely right.

There are so many distractions and interruptions in the narrative and action that Solatorobo never manages to build momentum. There is a pointless, chatty dialogue sequence at the end of every hallway and an abrupt change of scenery at the end of every chapter. As an animated film, Solatorobo could cull those ten years of production into a memorable adventure. Why settle for this shallow, repetitive interactive adaptation?