Sneaky Sneaky is all of the above. At times, it hits all the right notes, providing smart, satisfying stealth puzzles. At others, it is an unfair slog through rooms built around ideas that add variety in theory but are not any fun in practice. In the end, Sneaky Sneaky has some redeeming qualities, but it is just as easily passed on. 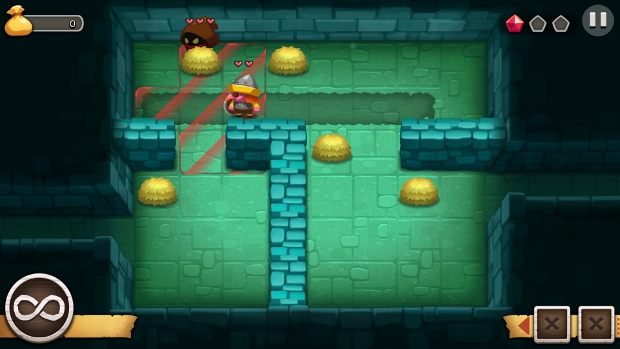 The basic idea behind Sneaky Sneaky is pretty original. As long as the titular thief remains undetected by any enemies in a room, he can move about the Legend of Zelda-esque rooms freely. Once he is spotted by or otherwise alerts a sentry, gameplay slows down to a turn-based affair. Whether Sneaky or the enemies move first depends on if he initiated the encounter through an attack or if he was detected.

It sounds good on paper, but therein lies one of the frustrating bits of Sneaky Sneaky, at least early on. With low starting health, being detected almost always results in an automatic fail state where multiple enemies hone in and whale away until the thief explodes in a puff of smoke. The penalty for dying is fairly low: the player must only restart the current room and sacrifice a point bonus at the end of the level, but it is still irritating when a misclick spells automatic failure.

Sneaky can hide in haystacks and bushes; he is safe as long as no enemy tries to enter his space on the grid and nobody watched him enter the space. The different enemies have varying vision cones and movement patterns, and if Sneaky can land a knife attack from outside his target’s line of sight, he receives a damage bonus to the attack and a healthy point bonus for the level.

In fact, points are awarded for non-stealth kills too. It is a little counter-intuitive for a stealth game; clumsily setting sentries off and cleaning up the mistake is worth more in the end than an artful pacifist route. Since stealth kills are worth the most, it becomes a game about entering a room and calculating the best way to systematically assassinate everyone there. This is not inherently flawed gameplay, and in fact it is entertaining enough once it is clear that is the true goal, but it seems inconsistent with the narrative of a thief whose primary focus is treasure.

What throws a wrench in early on is that some enemies move around randomly. When foes have a set path or pattern, then real planning is possible. When there is no predicting where something will move next, then there is no way to safely sneak up behind it, and getting a stealth kill often involves sitting in a patch of tall grass for what feels like several minutes, just waiting for it to happen by. There is a consumable item that helps with situations like this, but as a consumable it may not always be on hand. 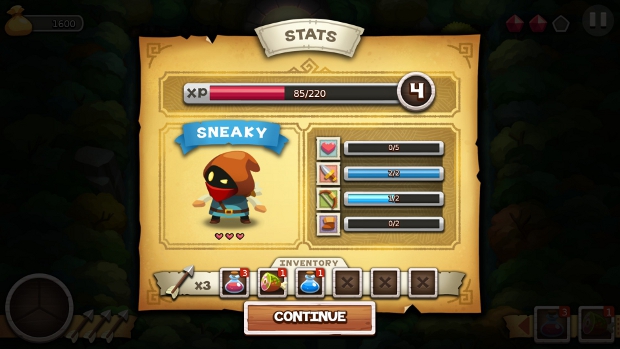 As the game progresses, new enemies and obstacles show up, and new items are introduced to circumvent those enemies and obstacles. Some of the additions are helpful in keeping the experience feeling fresh, but for the most part the best rooms are the ones that can be solved with careful planning, particular movement, and an undetected knife to the back.

Admittedly, that describes the last set of levels well. If the entire game played like the third act, it would be a great little title.

Fortunately, getting to the third set of levels is fairly easy. Even with the automatic failures of the early levels, the scoring system is forgiving. After completing a level with what feels like a dismal run fraught with detection and death, a gold medal is still awarded easily. In fact, I never received anything lower than a gold medal, and only had to return to a level once for a ruby that can only be obtained after gaining access to a later tool. 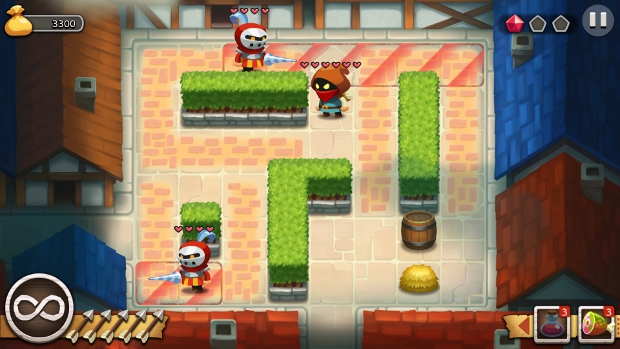 Thus is the enigma that is Sneaky Sneaky. It is simultaneously too harsh and too forgiving. It requires too much waiting to optimally solve some rooms and too much rushing for others. It does some things well, but then for the sake of variety it introduces other elements that serve only to muddle the experience. If the game were just about an assassin with a knife put into a sequence of puzzle rooms without any RPG-lite character progression, it would be greater for the simplicity.

Still, Sneaky Sneaky is not a bad game. At five bucks for about two hours of gameplay, I could even recommend it to fans of stealth and/or puzzles. But it is by no means a must-play, even for fans of those genres.