Well-designed, challenging puzzle games can be hard to come by these days, but they are out there. Games like Antichamber, English Country Tune, and Splice are a few Steam titles that come to mind for providing particularly head-scratching puzzles in a very good way.

Snakebird is another worthy addition to the puzzle genre. Don’t let its cute, brightly colored art style throw you off, though. This game can be obscenely difficult, and many of the levels may seem impossible at first. But once you figure out all of the nuances of the controls and the snakebirds’ abilities, you’ll soon begin to realize just how brilliant the puzzle design in Snakebird can be. 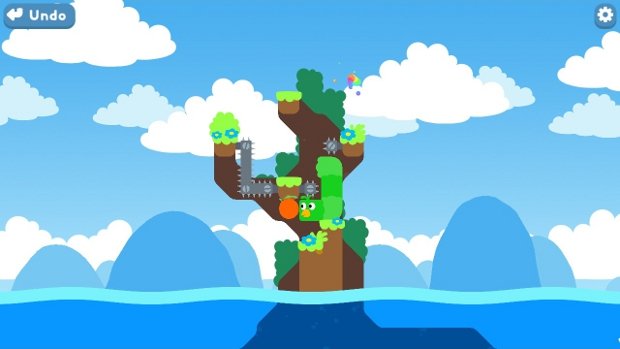 At first glance, Snakebird isn’t all that intimidating. It’s made to look cute and appealing, with bright colors, simple cartoon graphics, and adorable bird/snake hybrid characters which easily bring to mind more casual games like Angry Birds. But be warned: this is far from a casual experience.

On one hand, the cute art style helps by drawing people in and keeping them calm and relaxed while they fail again and again at the puzzles, impaling their adorable snakebirds on spikes and throwing them off of cliffs. But I do worry that the simple graphics might turn some players off to the game too soon. It’s definitely not the type of game that it appears to be, but I kind of like that it subverts expectations like that.

The goal of every level is simple: eat all the fruit and get each snakebird into the portal. No snakebird can be left behind, so if one makes it into the portal but the other one can’t reach, you might have to start over from the beginning (or at least backtrack a few moves).

Eating a piece of fruit increases the snakebird’s size by one segment, usually making it easier to navigate certain puzzles. But be careful! Just because a piece of fruit can be reached doesn’t mean the puzzle has been solved yet. Most puzzles involve finding the correct path to the fruit, which is not always the most direct path. In fact, the most direct path more often than not will lead to a snakebird getting stuck or dying, but keep in mind that you can easily backtrack in case mistakes are made. If a snakebird dies, the game immediately resets to the last move before death, and you can keep backtracking from there if need be. Once all fruit has been eaten, the portal will open, creating an exit from the level.

One of the largest sources of difficulty comes from simply figuring out the physics and abilities of the snakebirds. While there is a tutorial level, it really only covers basic movement and how to open the portal. Everything else is up to the player to figure out, and it’s not always obvious. 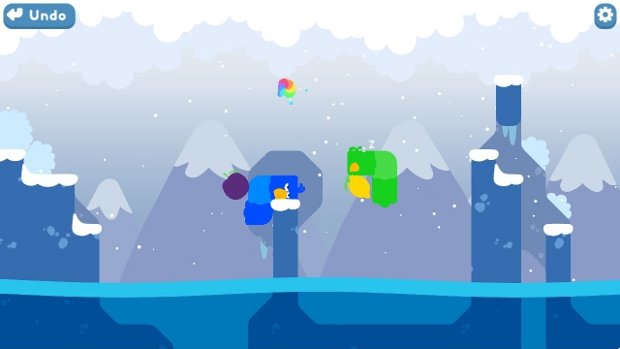 Here are a few mild hints for new players who find themselves getting stuck really early on (possibly even on the second or third levels). Normal physics don’t really apply to snakebirds. They always hold their current shape while falling. They can sit on top of floating fruit without eating it. They can push other snakebirds and certain obstacles (or multiple things at once), sometimes even in ways that might not make a whole lot of sense when you think about it. Snakebirds that are pushed will always maintain their current shape. Also, it’s usually a good idea to try and figure out what position they will need to end up in to reach the portal, in order to plan out your moves accordingly.

Eventually, through trial and error, you’ll develop skills and moves that you wouldn’t have even dreamed of at the beginning of the game, and you’ll start flying through the puzzles, only to get stuck again a little while later on a puzzle which requires a new skill to be discovered. This might leave some players overly frustrated, but options for each level are not endless, so players are bound to figure out a solution as long as they keep trying new things.

Snakebird does a good job of keeping things interesting by introducing new mechanics every so often, including the addition of multiple snakebirds in a single level, spikes, movable platforms, and teleportation portals. Each themed area introduces something new, and then there are the special star levels which will test your abilities to the fullest. 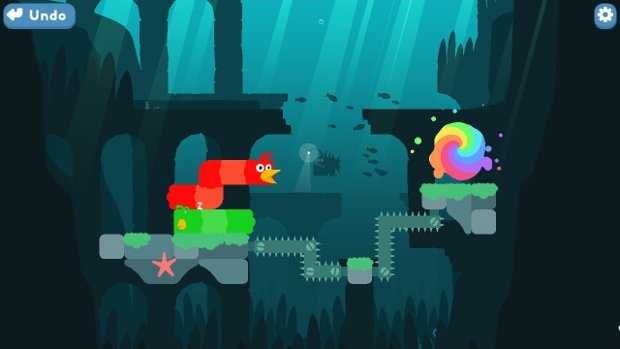 There are a total of 53 levels, and the difficulty of each level will probably vary from player to player. The map is also non-linear, so beating one level might open up several more to choose from. It took me about 13 hours to beat every level, although I had a particularly tough time figuring out a few of them (a couple that come to mind include level 20 and level 44, both of which took me WAY too long to figure out). Usually, I would have to sit and stare at a difficult level for a while, or even stop playing entirely and just take some time to ponder the level and all of the possibilities, and then come back later with fresh ideas. But the feeling of finally completing a seemingly impossible puzzle after so much failure is just so wonderfully satisfying!

Personally, I think Snakebird could have benefited from a few extra features. Including statistics such as the amount of time it took to finish a level or the number of moves used would have added a bit to the replayability. As it is now, once a puzzle is solved, there’s really no incentive to go back and try it again. Leaderboards would also be a welcome addition, since I’m sure many players out there figured out way more efficient methods of solving certain puzzles than I did.

Snakebird is not for everyone. But for those puzzle-lovers out there seeking the ultimate challenge, definitely give Snakebird a shot. You might be surprised by how often this game will leave you stumped, but that just makes the feeling of overcoming challenges so much sweeter!