Halloween isn’t off to a good start

As I pointed out in my original Sleeping Dogs review, the game sorely lacked ghosts. Now there are ghosts. 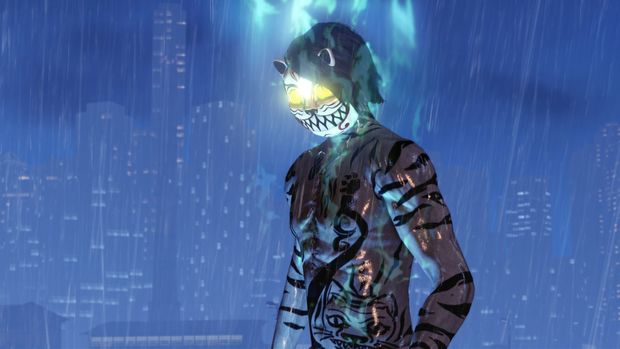 In the spirit of Undead Nightmare and Festival of Blood, Nightmare in North Point is a Halloween-inspired expansion that transforms 2012’s best free-roaming game into something much more sinister. Pummeling ghosts and driving fast cars makes for a good excuse to jump back into Sleeping Dogs, but Nightmare is a far cry from the success that Rockstar and Sucker Punch achieved.

If you’ve seen the trailer for Nightmare, you’ve seen most of the game’s cutscenes. The opening and closing of this 90-minute expansion are awkward and rushed, not capturing any of the B-movie charm that was clearly the aim. The DLC begins with Wei Shen leaving a movie with his girlfriend. While he is laughing up the premise of Jiang Shi ghosts, a real one appears right before him in North Point. Wei Shen’s girlfriend is taken away, possessed citizens roam the streets, and the mysterious, undead Smiley Cat is causing havoc across the city.

Outside one brief shooting sequence, Nightmare focuses entirely on chase sequences and combat. Chases were my least favorite part of Sleeping Dogs, but I always enjoyed the hand-to-hand fights. Unfortunately, I couldn’t find the same love in Nightmare. This is due to the new Jiang Shi enemies and the combat scenarios they present. They are a pesky enemy to go up against, since they’ll suck your blood until you waggle free. This sort of thing didn’t bother me in Resident Evil 6, but it drove me nuts here. I hated it! These vampire-ghost-things will just keep sucking your life away until you waggle left-to-right. It’s so awkward.

Occasionally, you’ll need to throw enough Jiang Shi into their spawning location to close their portal. This feels like busy work and isn’t the least bit fun. You’ll eventually acquire magical powers from antifreeze and a “ghost pepper” (must try at home) which gives you some satisfyingly overpowered attacks. However, you’ll need to build up your face meter first. The expansion introduces one more enemy type that can only be defeated while Shen is in that temporary state. This leaves you in encounters where you grind on the ghosts to build the face meter and then focus on the other foe. Once again, not fun. 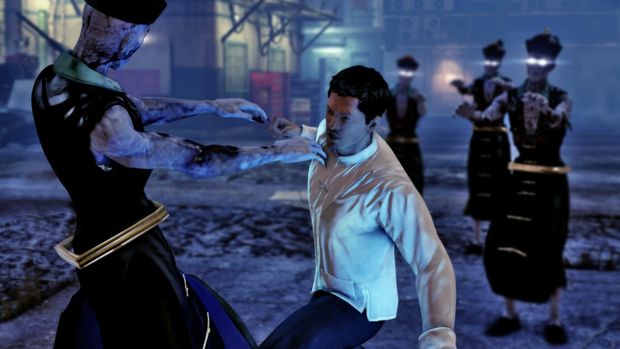 All of this would be partially excusable if Nightmare built great atmosphere and had a strong story like Undead Nightmare. The expansion has its moments, especially for those who have finished the main campaign long ago. Hanging out with Vincent’s ghost as he rambles on about food is a nice touch. There are some other encounters with old friends and foes, but I won’t spoil all that here. Nightmare does have some alright ideas but it lacks strong execution.

The downloadable content will take you down familiar locations of North Point, except now the overcast city has a lot of blue fog. Like the rest of Nightmare, it feels like a lazy attempt to achieve what Rockstar did so much better. Nightmare in North Point isn’t terrible. If you are dying for an excuse to jump back into Sleeping Dogs or are hurting for some Halloween-themed gaming, this expansion may temporarily satisfy your cravings. Just know that this is a poor echo of the greatness found in Sleeping Dogs and not nearly as charming and thought-out as Undead Nightmare.

Someone really needs to wake this puppy up! Thank you! Thank you! I’ll be here all night.