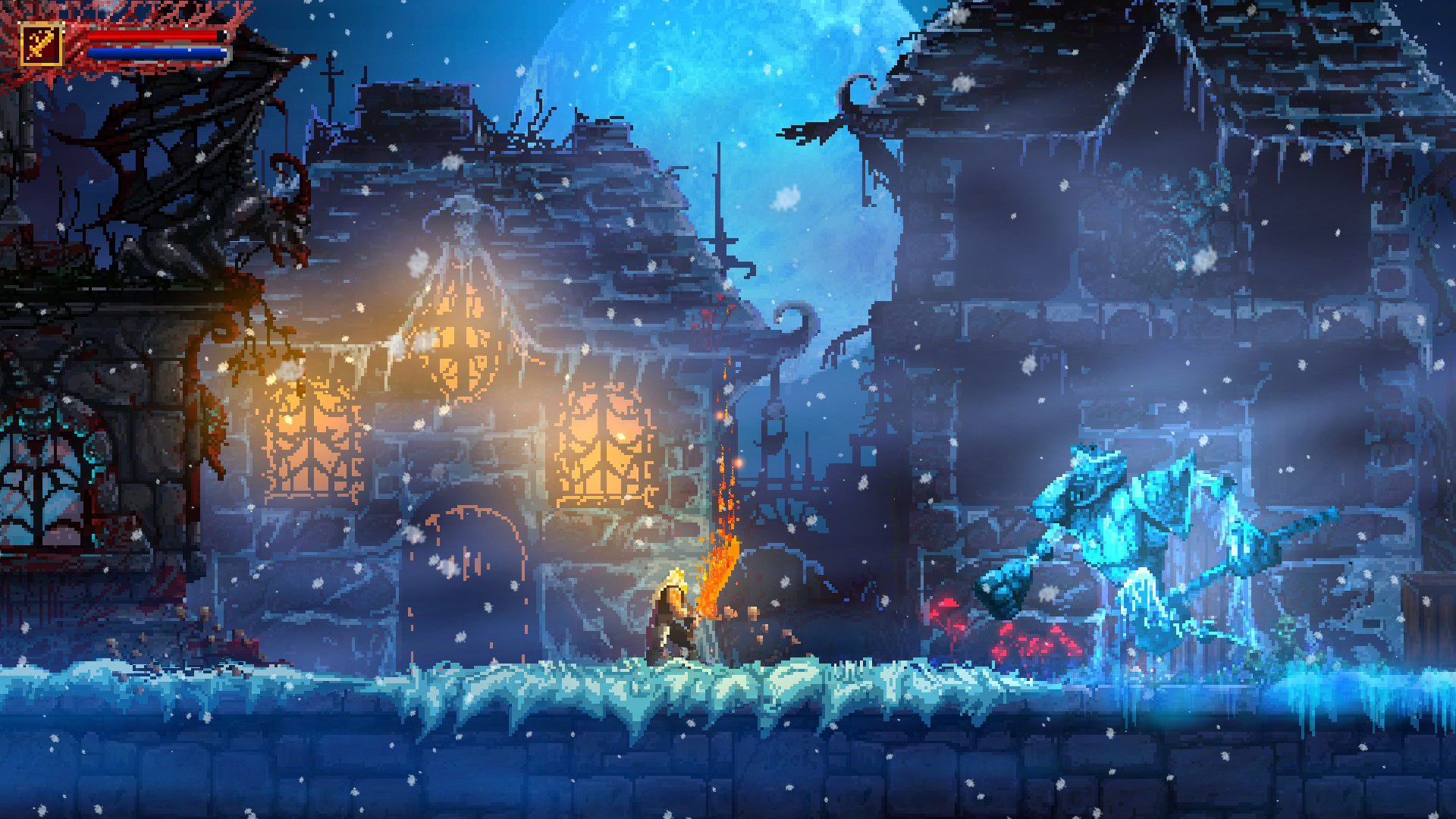 From the outside, Slain! looks like a metal-as-hell take on hack-and-slash titles.

It shows well in gifs, especially. The art direction is gnarly and stands out from the technically-skilled-but-uninspired pixel artwork that has become so common among games from smaller teams. The monsters are foreboding. The world is intricate, overflowing with colorful light sources and particle effects. In short: it seems damn cool. I was eager to put my name down for the review months ago.

Too eager, it turns out. The art and animation are two of the only things this game has going for it. 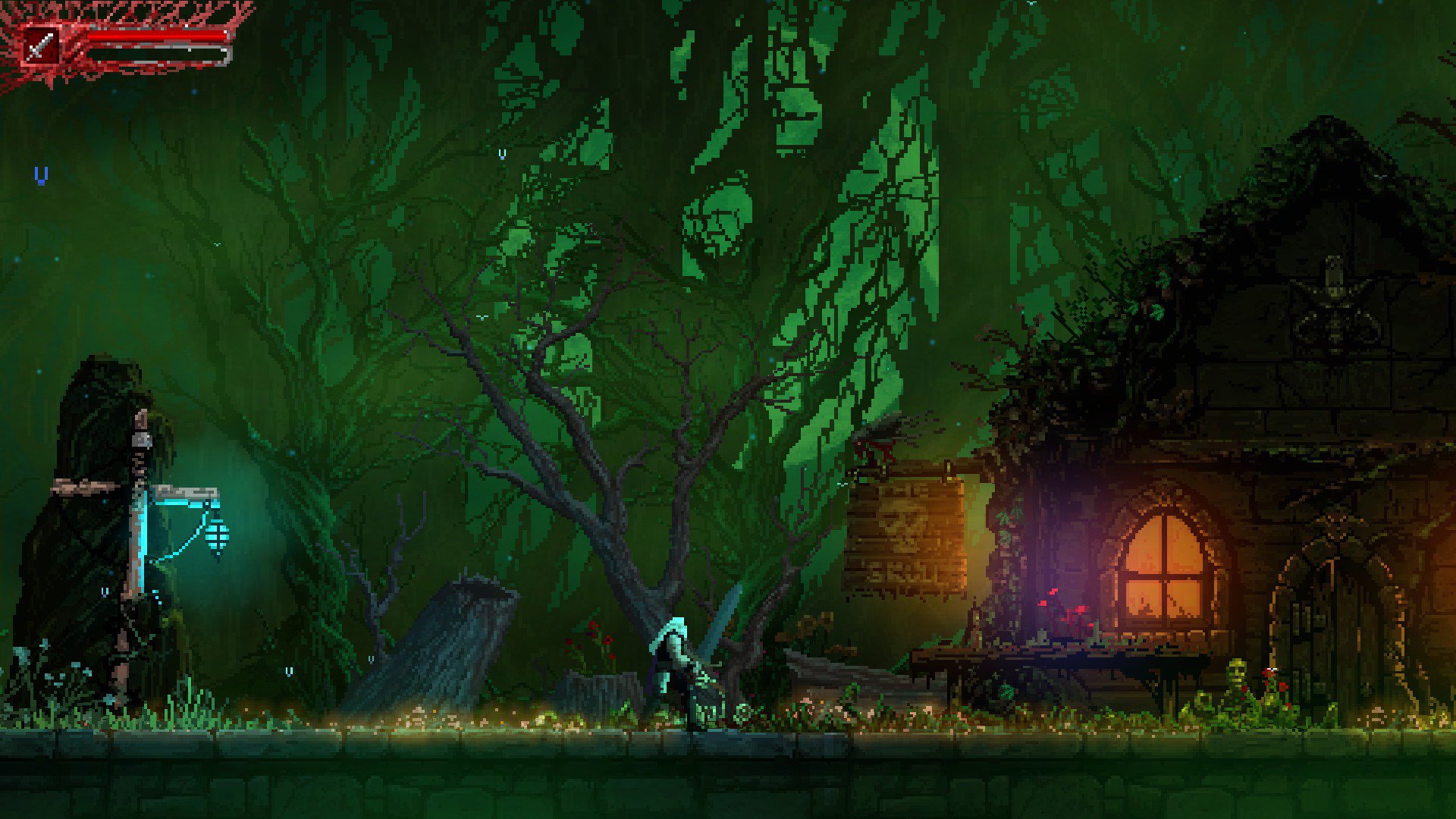 As a warrior begrudgingly sent to purge the land of evil, you’ve got a special sword in hand and hundreds upon hundreds of creatures to cut through before reaching the big bad overlord. I came in knowing Slain! was going for a simpler style of combat — something akin to what we might have played in the arcades in the late ’80s or early ’90s — but I was still surprised by its shallowness.

You can do a basic swing, a sort-of three-hit combo attack, fire off a spell if you have a bit of mana, and drop a powerful, screen-clearing bomb if you have all of your magic saved up. There’s also a backwards slide (which I kept forgetting about), and the ability to duck which has the added benefit of blocking — but only against projectiles. That all sounds fine. Simple, but not inherently bad. The end result, though, feels either cheap and frustrating or dull and unfulfilling. It’s weightless and repetitive.

Enemies walk at you, usually slowly, and have a bunch of health. Way too much health. You stand there, swinging at each other until someone goes down, and the tougher foes can take upward of 50 hits. Inevitably, you’ll slip up somewhere — or they’ll somehow manage to break through one of your attacks anyway — staggering you and slicing a chunk off your health meter. It’s a war of attrition as you work your way through the crowds of skeletons and witches to the next life-replenishing checkpoint.

There is little strategy to the fighting if you’re playing it the way it’s meant to be played (hit them before they hit you, and use a decap-attack at the end to regenerate mana), and there’s none whatsoever if you’re playing to consistently win. Eventually, I figured out how to interrupt just about every enemy’s animation cycle by spamming the sword swing while ducking, and didn’t look back.

The bosses — while, again, visually interesting like the rest of Slain! — don’t do much more to hold your interest in terms of combat. There’s a greater need to move around the screen, reading their tells and dodging appropriately, but many of the battles still boil down to a lot of button mashing.

The platforming is basic; there are some diversions to find hidden switches and certain areas that stretch upward, but it’s mostly a linear left-to-right progression once you enter a level. Using an Xbox One controller, I only struggled with one specific obstacle: ceiling traps. The timing is a little tricky to avoid being squished, and if you brush up against the side of these devices, you’ll explode as if you were crushed. But other than that, the handling is all right. I rarely fell to my death.

Using a keyboard, on the other hand, I struggled with everything; there’s a slight input delay for horizontal movement that’s really hard to adjust to and shouldn’t even be there in the first place. I imagine it will be fixed in an upcoming patch, but as is, you simply won’t want to play this way.

That lack of polish extends to other elements, including the sound effects (which are rarely, if ever, audible) and the writing. My goodness, the writing. The dialogue is utterly strange. It’s jarring and ill-fitting, with the acronyms and shorthand you’d expect to find while reading a string of wrong-number text messages sent by a drunk stranger. Tonally, it does not jive with the rest of the gothic, gruesome vision and the game would be better off without it. 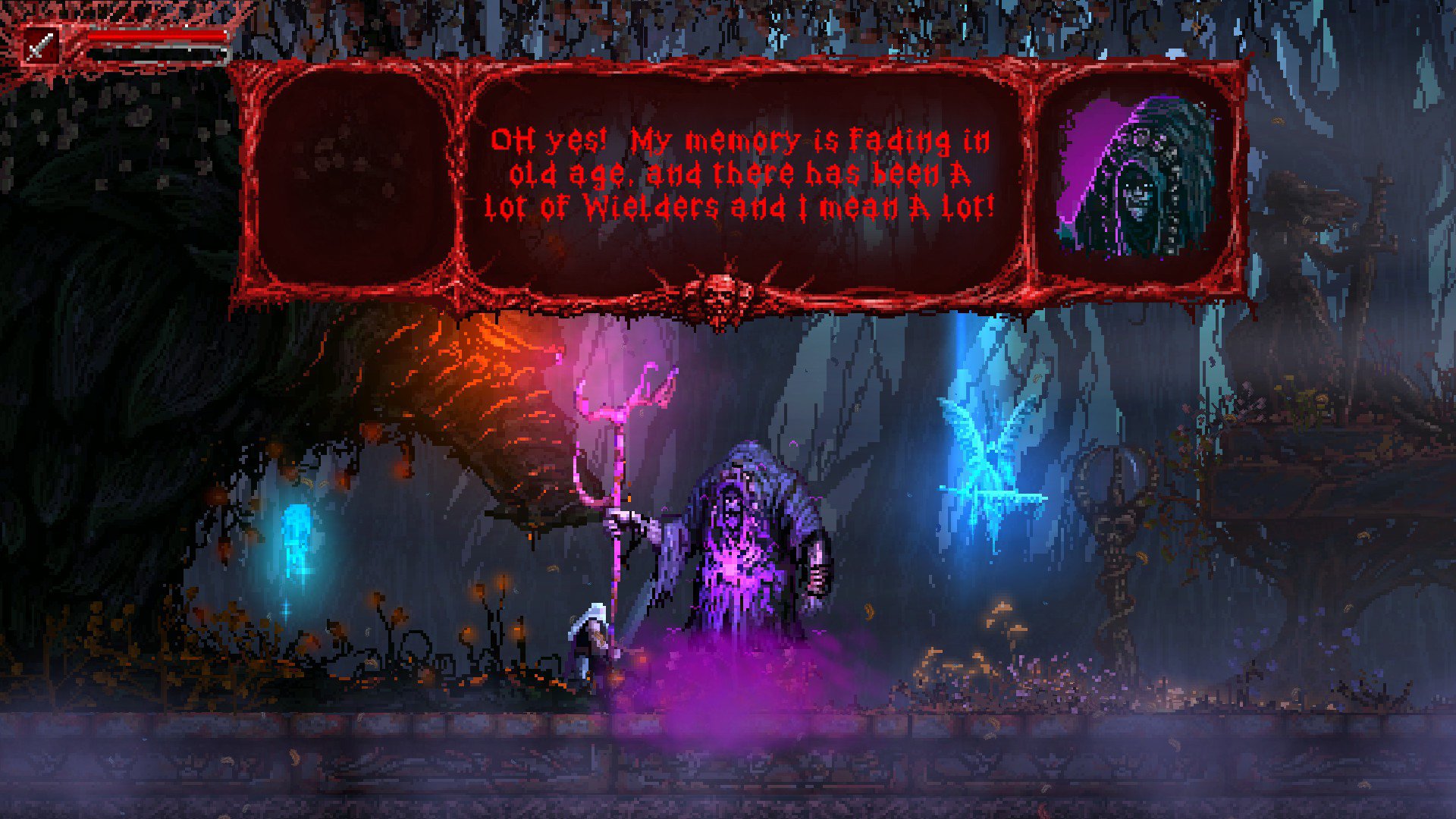 Then there’s the bizarre ending. I’ve seen it twice, now. The first time, I inadvertently started a level that led to the would-be final confrontation. The villain was right there, sitting on his giant throne, delivering a speech as if he was preparing to throw down. The building we were in shot up into space, he turned into a dragon (here it comes!) and then he… just melted my flesh off with a fireball. In a cutscene. That was it. That was what this journey was building toward. My legendary sword lived on, but I sure didn’t. After a snippet of exposition and a “To be continued,” the credits rolled. Well, they were supposed to, but a bug prevented them from displaying and I had to Alt + F4 my way out.

Thinking this had to be some sort of “bad” ending, I went back to finish all of the remaining levels I could find, but doing so eventually kicked me back down the same path leading toward the same ending. Maybe I missed a secret area or two. That’s plausible. But even if there is an alternate conclusion and it’s somehow better written or more interesting than the rest of the story, it’d be too little too late.

Recounting my experience to coworkers, I was at a loss for how Slain! could look and sound as good as it does while failing to deliver on essentially every other aspect. While the developers have heard similar feedback from players and have publicly promised improvements, the game’s problems lie in its foundation. I’m sure it can and probably will get better over time with polish, but what’s here at launch is disappointing. I struggle to picture Slain! ever becoming genuinely good barring major reworks.