Year after year, I can generally count on the Skylanders games. I had zero hope for Spyro’s return back in 2011, but every single iteration has been a competent brawler. While Activision can be accused of running franchises into the ground with annual iterations, it’s doing right by this series.

While the momentum was halted a bit with the gimmicky “traps” of last year’s Trap Team, I’m pleased that developer Vicarious Visions has managed to recapture the magic with Skylanders SuperChargers‘ vehicular-based combat. 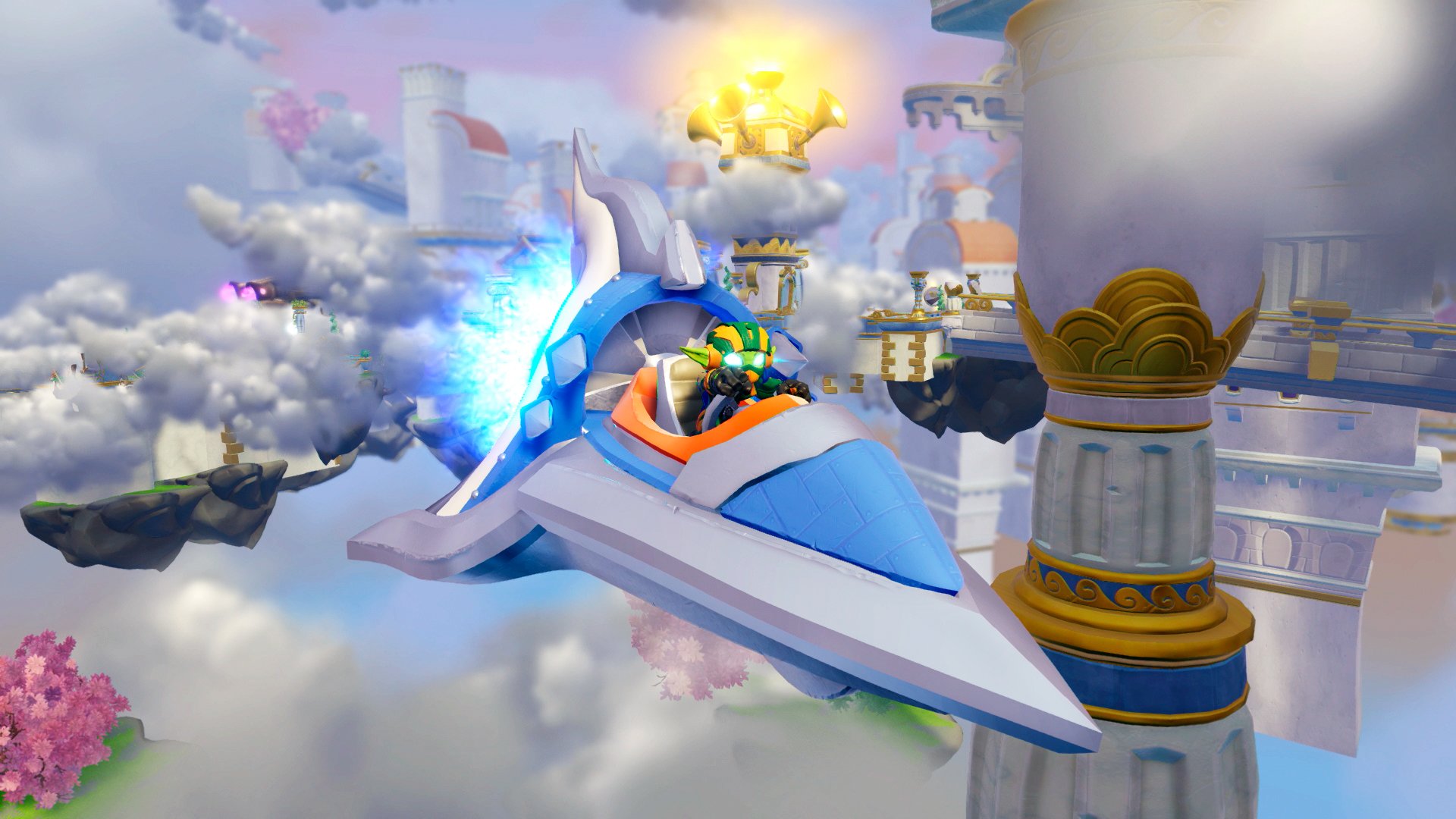 To be frank, I was worried about the state of Skylanders after Trap Team. I mean, sure, it was a great action game and still had its charms, but I was starting to think that Activision had been scraping the bottom of the barrel with its newest gimmick. With the vehicular-based focus however, Vicarious Visions has turned the formula on its head again, going back to basics with old-school, sensible tendencies.

The focus here is vehicles, and not just cars. Land, sea, and air-based transportation is at the crux of the experience, with the Starter Pack providing the former. To be clear, there are elemental gates for ancillary content (forcing players to use certain toys to access some areas), but the fact that the entire core game can be completed with one land vehicle, and the vast majority of sidequests are accessible with just one sea and air toy respectively is a massive step up from past titles. Yes, you will have to spend a bit of extra cash to get everything, but I was completely satisfied with the main campaign on its own terms.

Speaking of the toys themselves, they’re still at the top of their game. All of the vehicles sport moving parts, and take me back to my Micro Machines days, racing cars across a table with glee. There are fewer new characters this time around in favor of the vehicles, which is fine in my book, as they’re much easier to wrap your head around with three distinct varieties. Just like before, two players can play together on the same console with two different Skylanders — here, a vehicle can be added to the mix with the new portal. Yes, that’s one vehicle. While I initially thought it was a limitation, it actually feels like a more deliberate design choice, as sharing a ride is much more fun as a co-op experience.

One person drives, and the other shoots — it’s that simple. With the touch of a button you can switch roles, should someone else want to take the driver’s seat. Movement is intuitive, as the driver is only focusing on traversal, and the shooting bits cleverly make use of a reticle to avoid the need for the driver to always be in sync with their partner. In short, it allows everyone a ton of freedom, but it isn’t too overwhelming of a prospect to hop from car to car.

The story this time around doesn’t require any prior knowledge of the series, which simultaneously works in its favor and hurts the setup. Once again, Kaos (who is still charming as “Not Invader Zim,” but is getting a bit old at this point) reigns supreme, it’s just that this time he’s taken the noble Eon captive, leaving your ragtag team of Patrick Warburton and company to save the day. It’s a plot that belongs in a Saturday morning cartoon, but the sleek visuals and upbeat performances sell it well enough.

During the 10-hour campaign, you’ll find plenty of variety when it comes to mission types, enemy patterns, themes, and gameplay. One moment you might be diving underwater in an obstacle course of sorts with a submarine, and the next, you’re up in the air dogfighting, Star Fox style (yes, you can barrel roll). The pacing is excellent, and boss fights are seen in a whole new light as vehicular confrontations. But this time you’ll have Mario Kart-esque races as a distraction as well, which are easily the best pieces of side content yet for the series. 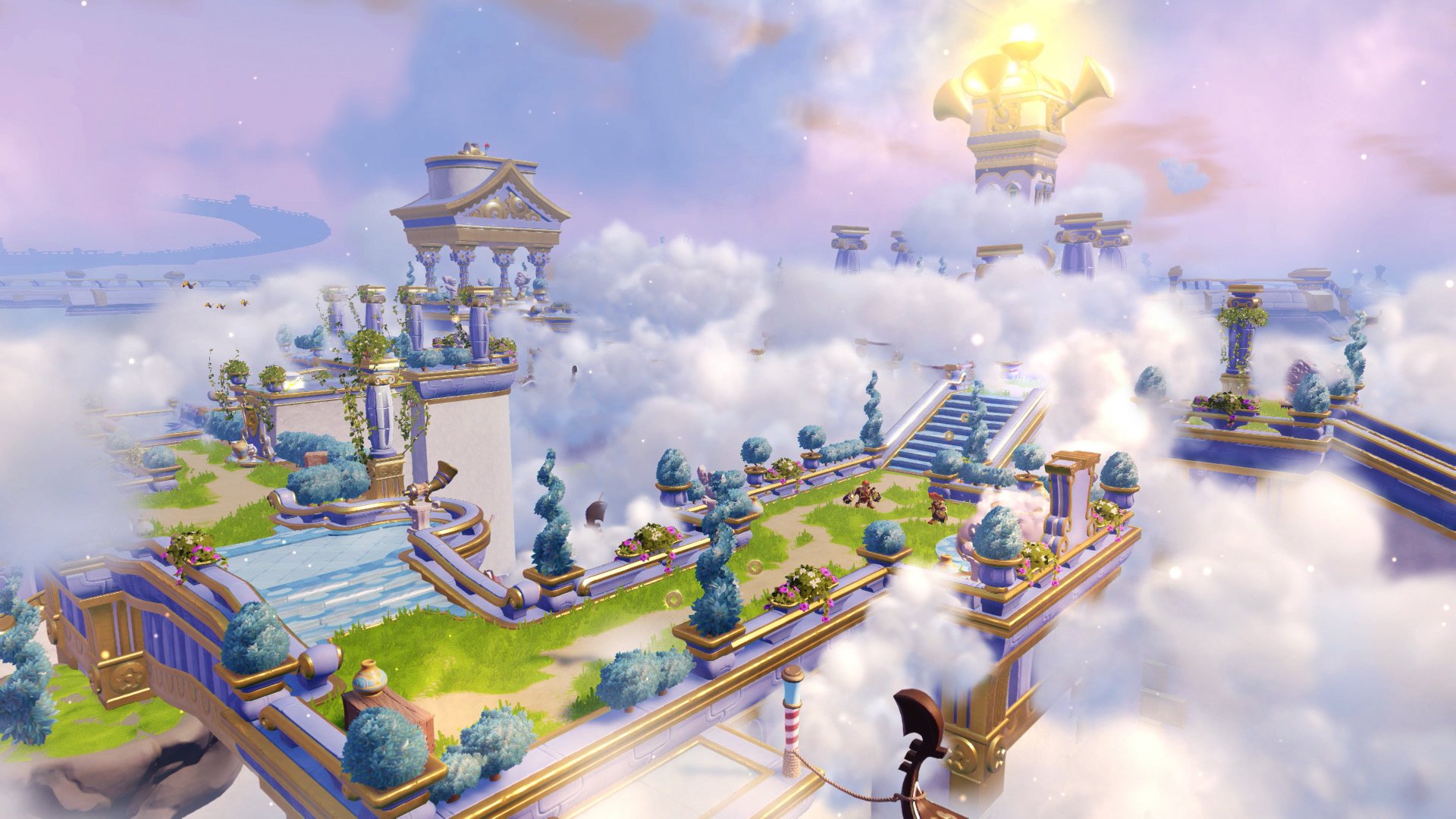 The entire affair feels thoroughly integrated into the game itself, without feeling like a tacked-on “me too” mode. One race for instance features a level populated by two giant dragons, who constantly are visible throughout the track, and occasionally pop out to cause havoc for the participants. Each level feels like it was given a sufficient amount of love, to the point where I’d put many of them on par with classics like Diddy Kong Racing and some of the best Mario Kart games.

That’s not to say that it completely measures up to its contemporaries. The item system feels limited, and the combat system in general (all cars can use their standard attacks during races) is disjointed, as some elements from the campaign don’t quite work in this gametype. Plus, you’ll need to buy a certain number of toys to access every track. No, it’s not perfect, but again, as a side mode, it does its job and then some. Online play for the campaign and racing modes also don’t hurt its case, on top of the revamped Triple Triad-like Skystones mini-game.

I’m utterly surprised that Activision hasn’t run this franchise into the ground yet. Skylanders: SuperChargers reinvigorates my interest in the series, and I’d go so far as to say that I wouldn’t mind a full-on SuperChargers racing spin-off in the same vein as a proper Mario Kart game (note that the Wii and 3DS editions are racing games, essentially). After all, a little competition never hurt anyone — maybe they can put that Crash Bandicoot license to good use.

[This review is based on a retail build of the game provided by the publisher. The Starter Pack and a few additional toys were provided as well.]