‘We’re on an express elevator to hell!’

100 floors up, countless mutants on the way down, and only one way out of town. No, this isn’t your average council estate in Swansea. 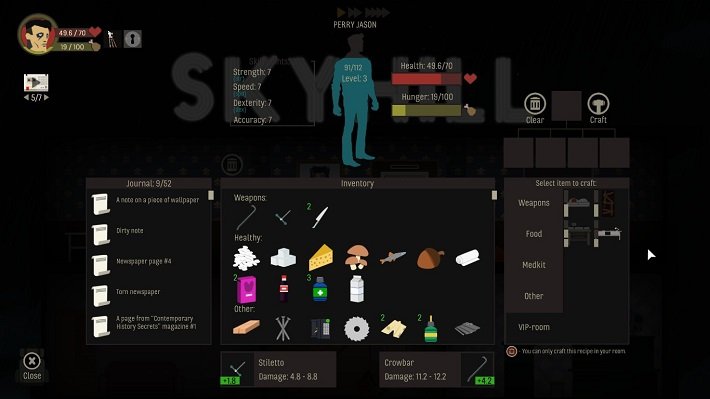 One man’s late-night extravagance ends up being his good fortune as Perry Jason’s penthouse suite shields him from a biological attack. Every guest and staff worker is transformed into a bloodthirsty mutant, leaving him the only human seemingly left alive. But without supplies and a wife lost to the city, he has no choice but to venture down 100 floors to escape this hotel-turned-house of horrors. Sounds easy, right? If only he wasn’t already starving to death and in need of some makeshift weapons.

Skyhill has the look of a horror game, but it’s a light RPG/roguelike/survival game at heart. You scavenge for food and items, combine ingredients for better supplies, all the while keeping an eye on your increasing hunger pains. It’s not a scary game, especially with the comic book horror presentation, but it does an excellent job of handing the tension over to the player and their decisions. Every new floor is a gamble, every consumable carries short-term and long-term effects, and every push downward has to be thought out in advance. Essentially, Skyhill is about knowing when to hold and when to fold.

Starting off in the VIP Room, which also serves as an upgradable home base, you work your way through each floor to reach the lobby (the end goal). Movement is done through a simple click on a room, but every location depletes a point from the hunger bar. Finding food is always the top priority; without it, movement depletes the health bar instead. Much of Skyhill is spent yo-yoing up and down the eponymous building, collecting random items, taking them back to the VIP room to craft better upgrades, then venturing back down to your last location. It might sound like a chore, but it’s actually quite effective at creating an air of desperation; pushing forward due to a lack of supplies or a regained purpose.

If you’ve played any survival games before, you’ll know what to expect from Skyhill’s crafting system. The tier system is easy to use, and it always tells you the items you need or already own. But keeping a hold of higher-tier items is a challenge, as you’ll always come across an elevator shaft that needs fixing with a certain item that you just created for something else. The same difficult choices happen with food supplies, too; eat the basics now for a short-term boost, or hold out to make bigger meal later on. It’s always a tough call. 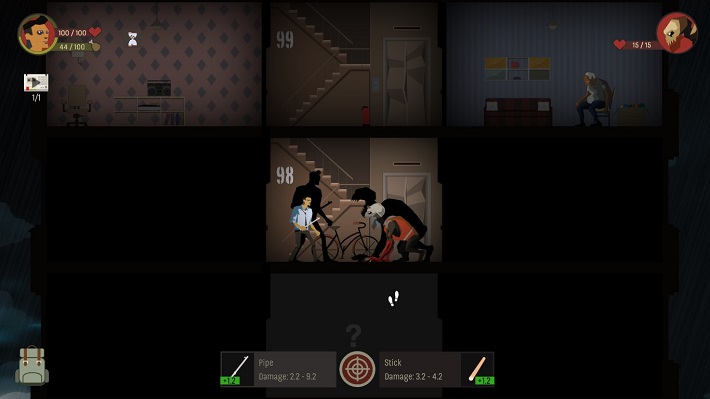 Of course, Skyhill wouldn’t be a horror game without combat. Due to cramped environments onscreen, the game opts for turned-based attacks and statistics. Each mutant type has 2-3 body parts to attack, but the more damage you can inflict, the less likely you are to hit. Players can level up their stats – damage, speed, dexterity, and accuracy – by gaining XP after every fight. Though, honestly, the RPG elements don’t really change up the combat, say, beyond landing more hits, and both end up becoming Skyhill’s weaker elements in the second half. Without an option to dodge (though you can retreat), combat is always tit-for-tat, and whoever gets the best string of hits wins.

If there was ever a perfect representation of Skyhill’s negative traits, it would be found in the building itself; a rinse-and-repeat of exploration between two rooms and a stairwell. Skyhill never evolves, even close to the ground floor, preferring instead to throw more mutant attacks in the way. The only reason the final 50 floors are tougher is because they’re more of a drain on resources; just more of the same without the breather. 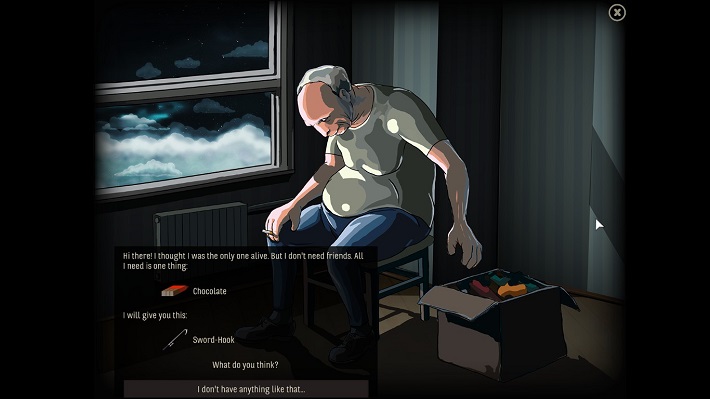 Still, Skyhill manages to be a decent stab at survivalist horror; rightfully using certain mechanics to avoid an even lesser game. It’s hard to imagine the combat working in real time due to the tiny spaces, or that if every room were visually more complex, it would lead to some tiresome pixel hunting. In a way, Skyhill is economical in what it does, even if it means being the old double-edged sword.

That said, when you get right down to the core of it, see how the elements work in your favour or conspire against you, Skyhill admirably creates this tense game of hubris and courage, one that never lets up until you escape or, far more likely, die.