“Civilization, but set in the future on an alien planet.” That is really all Firaxis and 2K needed to say to get people excited for the next entry in the long-running turn-based strategy series. There is a fair amount of new ideas to be found here: new systems to explore, new technology to research, and new obstacles to overcome.

But even with everything new, Civilization: Beyond Earth is still Civilization, but set in the future on an alien planet. And it is exactly as good as that sounds. 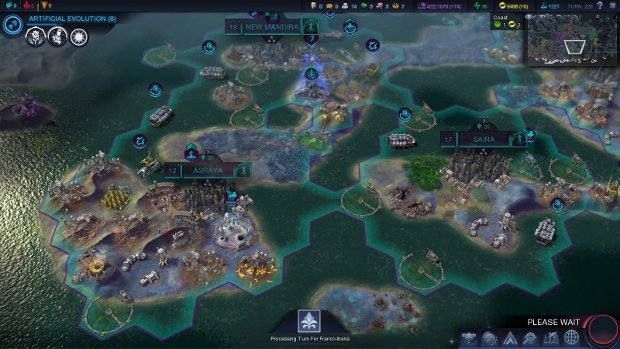 Civilization veterans will be immediately familiar with most of the systems in place here, as they mimic those in Civilization V closely. Players found cities, within which they manage production, food, energy, culture, science, and health. In the international arena, there is diplomacy, trade, exploration, espionage, and war. Everything is interconnected in some way, and success comes to those who find the proper balance of it all.

The interplay between all of the different systems and resources is complex. While the series has made positive strides with tutorial popups and the exhaustive Civilopedia it is still dense and a little inaccessible for new players. Some information is difficult to find but through trial and error. It is easy to know what Civilization is about, but it takes dedication to really know Civilization.

Fortunately, getting to know Civilization is inherently rewarding. Finding interesting synergies between technologies and powers makes the player feel smart. Forming plans and seeing them through to fruition is intensely satisfying, and it is largely responsible for the series’ notorious addictive quality. All of that is present in Beyond Earth.

The Affinities are level-based and the choice is always open to increase any of the three through technological advances and mission rewards. It is generally smart to specialize in one Affinity, since the more powerful units require a minimum level, but it is possible to maintain a broad approach and take a little of each.

The choice between Affinities sets the trajectory for the narrative of Beyond Earth. Though it is easily ignored for any who get into this strictly for the gameplay, the story is emphasized more strongly here than any any previous title in the series. It always starts the same: Humans wrecked Earth and have to find a new place to live. Which Affinity is focused on (if any) determines which victory condition is most easily attained, and each victory ends the story in a different place than the others.

Another new tweak to the systems is in the Virtues. Breaking from Civilization V‘s system and instead following the same philosophy behind Affinities, none of the Virtues are mutually exclusive. Each time a new Virtue is earned, players may choose to develop down one of four trees: Might (military power), Prosperity (food), Knowledge (science and culture), and Industry (energy and production). There are benefits for generalizing as well as for specializing, and no one strategy is clearly better than another. 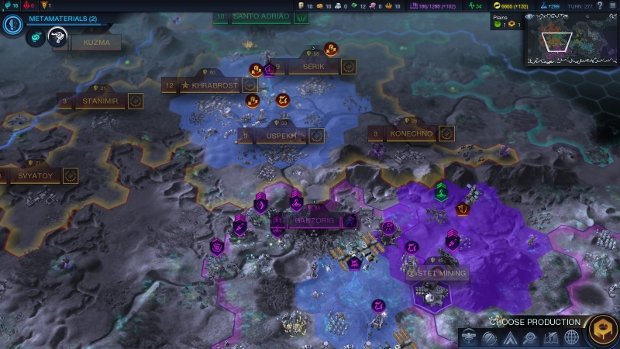 One completely new aspect of Beyond Earth is the orbital layer. Set above the normal ground-level action, there is a hex grid layer representing the position of satellites in geosynchronous orbit. These orbital units can have various effects over areas, including increasing output of affected tiles, improving combat prowess for units underneath, or attacking from relative safety with a planet-carving laser.

Placing an orbital unit near another civilization is not considered an outright act of war, though most will not take kindly to it. One memory I will keep for a long time involved General Kozlov placing a tactical support satellite near my borders, so I retaliated with an orbital laser in range of three of his cities, just waiting to be fired if he should misstep. It was the sort of cold war stuff that is often absent in games like this.

The technology system received a substantial overhaul in more ways than one. Naturally, the science-fiction setting demands the imagination of new technologies. Those found in Beyond Earth range from currently existent (titanium mining) to really “out there” (constructing a giant flower that allows a neural connection between all humans and the living planet), though most are based firmly in plausible ideas for future technology.

The most obvious change to the technology system is that it is set up as a radial web, expanding outward from a central point. The choice is available to set up a strong base of general knowledge, to make a beeline for any of the furthest techs, or to do anything in between. Most Affinity gains occur through researching specific technologies, so the tech web is also the arena that has the greatest effect on how a given civilization approaches the new world and how it plans to seek victory. 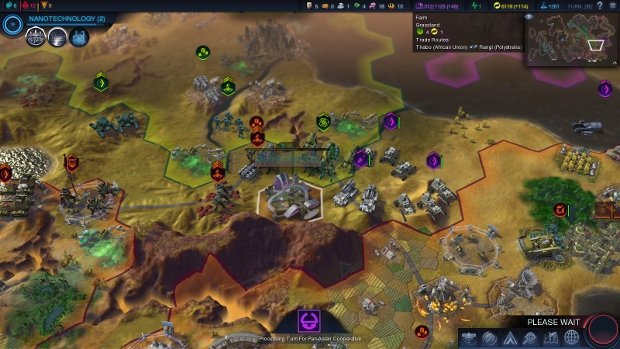 There are five victory conditions: one for each of the three Affinities, one reliant on non-Affinity technologies, and the standard “destroy all the other civilizations” victory. Purity is attached to The Promised Land victory, which seeks to settle Earthlings who stayed behind on the new planet. Supremacy is attached to the Emancipation victory, whose goal is to return to Earth and demonstrate the power of cybernetics. Harmony is attached to the Transcendence victory, which aims to meld minds with the planet itself. Contact is the Affinity-agnostic victory; it involves building a beacon to communicate with an intelligent alien race.

Narratively, each victory represents its corresponding philosophy well. The three Affinities approach the world with entirely different ideas, and their stories have appropriately different endings. However, the biggest failing of Civilization: Beyond Earth is that four of the five victory conditions feel too similar to one another from a gameplay perspective.

Though the narrative reasoning varies, the basic framework for The Promised Land, Emancipation, and Transcendence is as follows: Research the required technologies, level up the corresponding Affinity to 13, build a planetary wonder, then defend it for approximately 30 turns. Contact largely follows the same path but without the minimum Affinity requirement. What happens after a planetary wonder is built varies between victory conditions, but not enough to make the individual experiences feel unique.

From a balance perspective, it is easy to see why Beyond Earth adheres to this formula. It ensures a similar timeline regardless of path and it gives opponents clear warning that a player is nearing the end, allowing last-ditch efforts to race for another victory or topple the leader. For a series known for having multiple paths to victory, and especially for a narrative emphasizing just how divergent the ideologies within it are to one another, it is disappointing how similar each win condition is. There is no cultural, economic, or peace victory. There are only what amount to four science victories and a military victory. 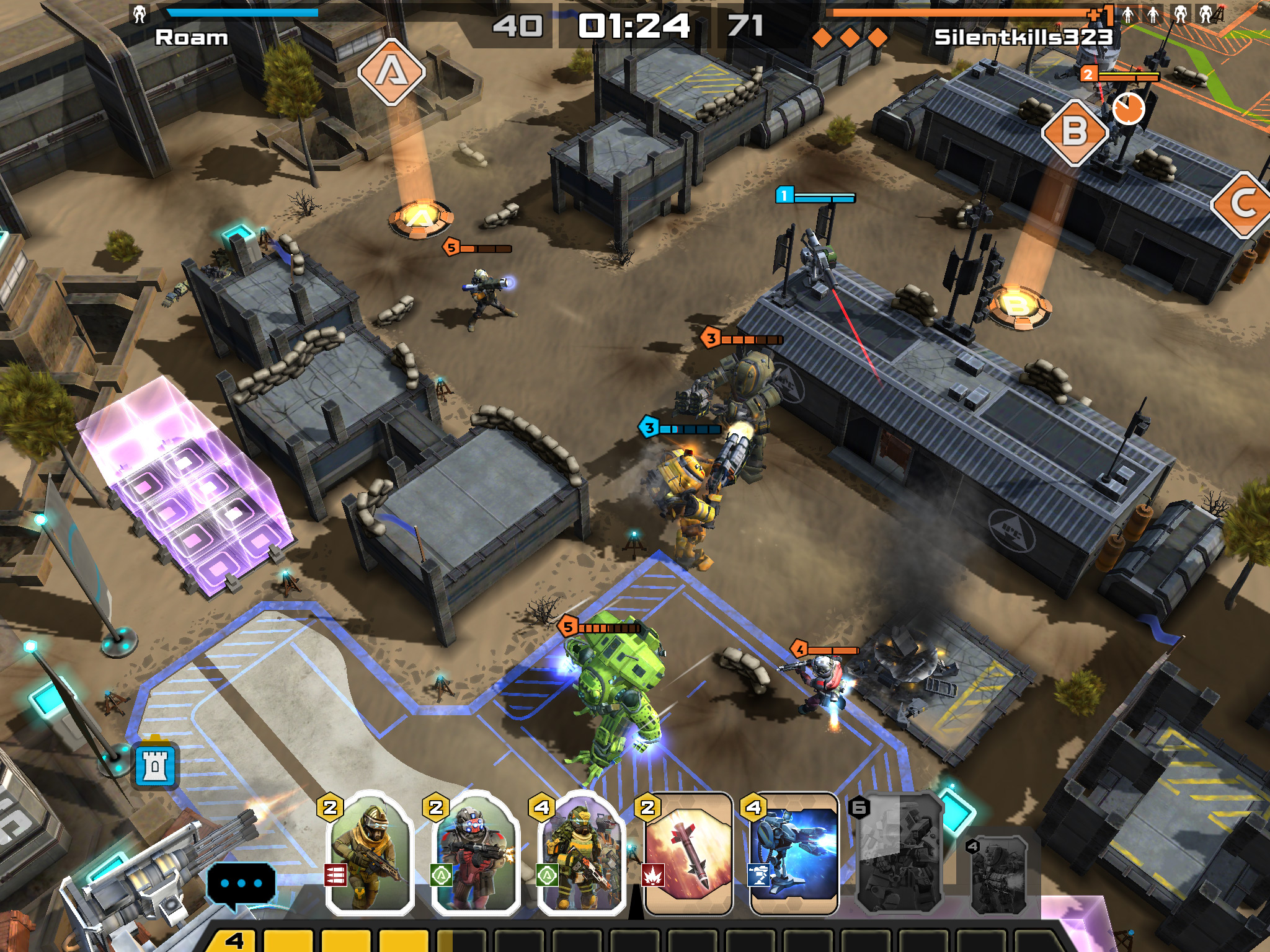 That said, the journey to get to the end does have a different feel depending on which Affinity is followed. The unique units bestowed to each Affinity interact with the environment differently and the benefits afforded allow for varied play styles. Where Purity and Supremacy fight against the planet’s toxic miasma, Harmony learns to harness its power. Where Supremacy and Harmony benefit from leaving alien life alone, Purity gains combat bonuses against it. Where Purity and Harmony are geographically limited, Supremacy leverages its superior engineering in order to easily spread its influence across the map.

Following the orbital escalation with General Kozlov described a ways above, he eventually did attack. After beating back his forces and teasing a peace treaty out of him, I dropped several tiles worth of miasma on his cities, just as a reminder for what happens when one messes with the African Union. He was cleaning it up for years, choking on it the whole time. Classic.

In a separate encounter, Hutama of the Polystralians made note of my relative military weakness and, fueled by avarice and envy, broke our neighborly trade relationship in hopes of coming out a few cities richer. Although I was outgunned, he grossly underestimated the severe tactical disadvantage the local canyons and mountains put him at, and his forces were sunk to the bottom of the ocean before they could make landfall.

That all highlights one of Civilization‘s greatest strengths: It provides the framework for totally awesome stuff to happen and lasting memories to be formed. Beyond Earth excels in that virtue with its new additions. 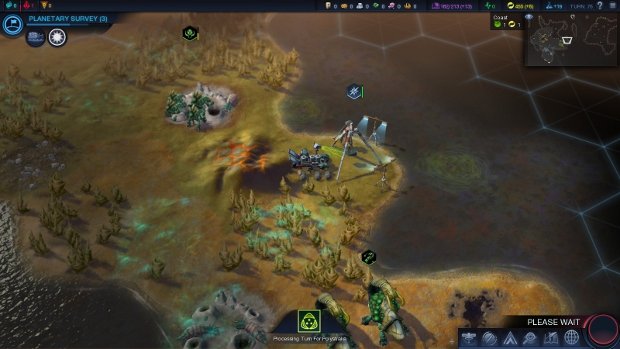 Aesthetically, Beyond Earth really nails it. The three different planetary biomes add visual variety, and the rich colors pop. The palette features a lot of teal, pink, and purple, which conveys the idea of an alien world well. The soundtrack is appropriately grandiose during the climaxes and subdued during the lulls. Upon a dastardly betrayal or the completion of a planetary wonder, sweeping string pieces evoke a feeling that history is being made.

In all, Beyond Earth is excellent. It maintains the secret sauce that the series is known for while adding setting-appropriate systems that change the gameplay up in interesting ways. Orbital units are inherently cool and add depth to international encounters. The narrative is thoughtful and important without being too preachy. Affinities show that the team put a lot of effort into considering how differing viewpoints may tackle the challenge of founding an alien world, as well as the consequences of those actions.

If only there were more variety in the structure of the victory conditions between divergent philosophies, Civilization: Beyond Earth would be a perfect game. Even with that dissonance, it is damn close. The Civilization pedigree holds a lot of weight after all these years, and Beyond Earth more than lives up to its name.