Also, some thoughts on Showdown

The time has finally come. It’s been five and a half years since Shovel Knight was released (time doesn’t just fly, it runs at light speed), and with the lofty King of Cards update, its quest is finished.

[Check out our reviews for Shovel Knight, Plague of Shadows and Specter of Torment.] 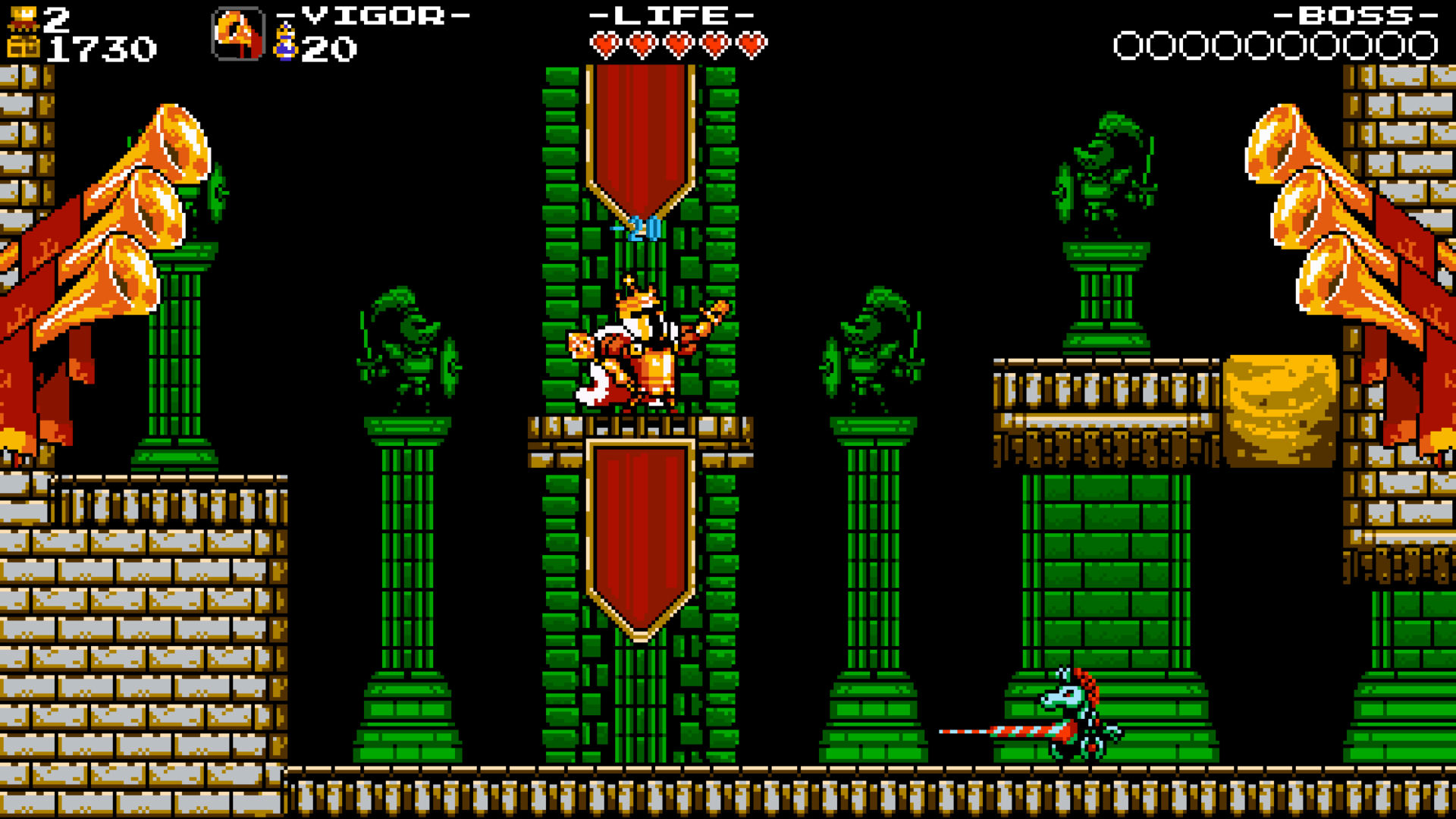 As another prequel of sorts for this 2D platforming series, this tale deals with King Knight and a hip new card game called Joustus, which is fully playable in the expansion (wait, come back! It’s optional!).

King Knight’s gimmick is a super-charged dash, which triggers a quick upward pirouette leap after hitting an enemy, object, or wall. If you just jump on an enemy naturally, you’ll take some damage: but queue up a spin and you’ll drive into them like Shovel Knight’s downward shovel thrust. To charge again, you have to touch something with a spin. It’s not all that exciting at first, especially compared to the more out-there Plague or Specter mechanics. But once you really get used to the cadence of charge-hop-step-charge, it becomes natural.

Once you start to pick up a few upgrades and get in the natural swing of things, you really get a sense for how Yacht Club has truly mastered the genre at this point. Although speedrunning is a viable option due to the relatively fair level design and pitfall placement, it’s a special feeling to stand in front of a potential platforming puzzle and take it all in; mathing out exactly how to approach each gap.

That’s not the best part of King of Cards though: it’s the expanded Super Mario 3-inspired maps and the integration of Joustus that completely differentiate it from past expansions. Oh, and King Knight’s insane personality that causes him to think he’s a king, while arguing with his mother than he’s more than just a prince whilst accepting home-cooked health-boosting meals. I love that Yacht Club Games is comfortable with this sort of craziness. It’s not something you see too often and they’re magically able to tap into that nostalgia without becoming saccharine.

The end goal is to actually become the master of the card game and/or the kingdom, but to accomplish the former achievement you’ll acquire new decks through the traditional platforming story mode or by beating card game opponents. The joy of Joustus is that you don’t need to know math or read a huge tutorial tome to understand it. Games are won by earning gems, which you get by “pushing” cards on top of them. Cards have arrows that “block” moves. At the end, you get to nick someone’s card for keeps. That’s it!

True to form King Knight can acquire “cheats” (temporary power-ups that grant bonuses) just in case you still don’t pick up all the arrow-based nuances, adding even more accessibility to it all. I can see why it took Yacht Club Games this long to fine-tune it: it really is one of the easiest pick-up-and-play card games I’ve seen in my three-decade plus gaming career. The campaign falters a bit at times (especially due to the re-use of environments), but it quickly gets back on track with Joustus breaking it up. Or, when you defeat the first boss and realize that the initial kingdom is just one of several worlds/maps.

If you still hate card games for whatever reason: the minigame doesn’t gate you from traversing each map as you can take alternate platforming routes. A satisfying series of epilogues tops it all off, on top of customary New Game+ and challenge mode options. It’s packed. Even after my first run, I felt like I had only experienced half of the expansion.

Although this review primarily deals with King of Cards, I should probably mention Showdown: the new Smash Bros.-esque fighting game module that’s been added alongside of it. Ever since Mega Man 7‘s secret fighting game I’ve longed for more 2D retro brawl-sessions, and the combo of a new card game and a fighter adds something special to Shovel Knight that it didn’t have before. 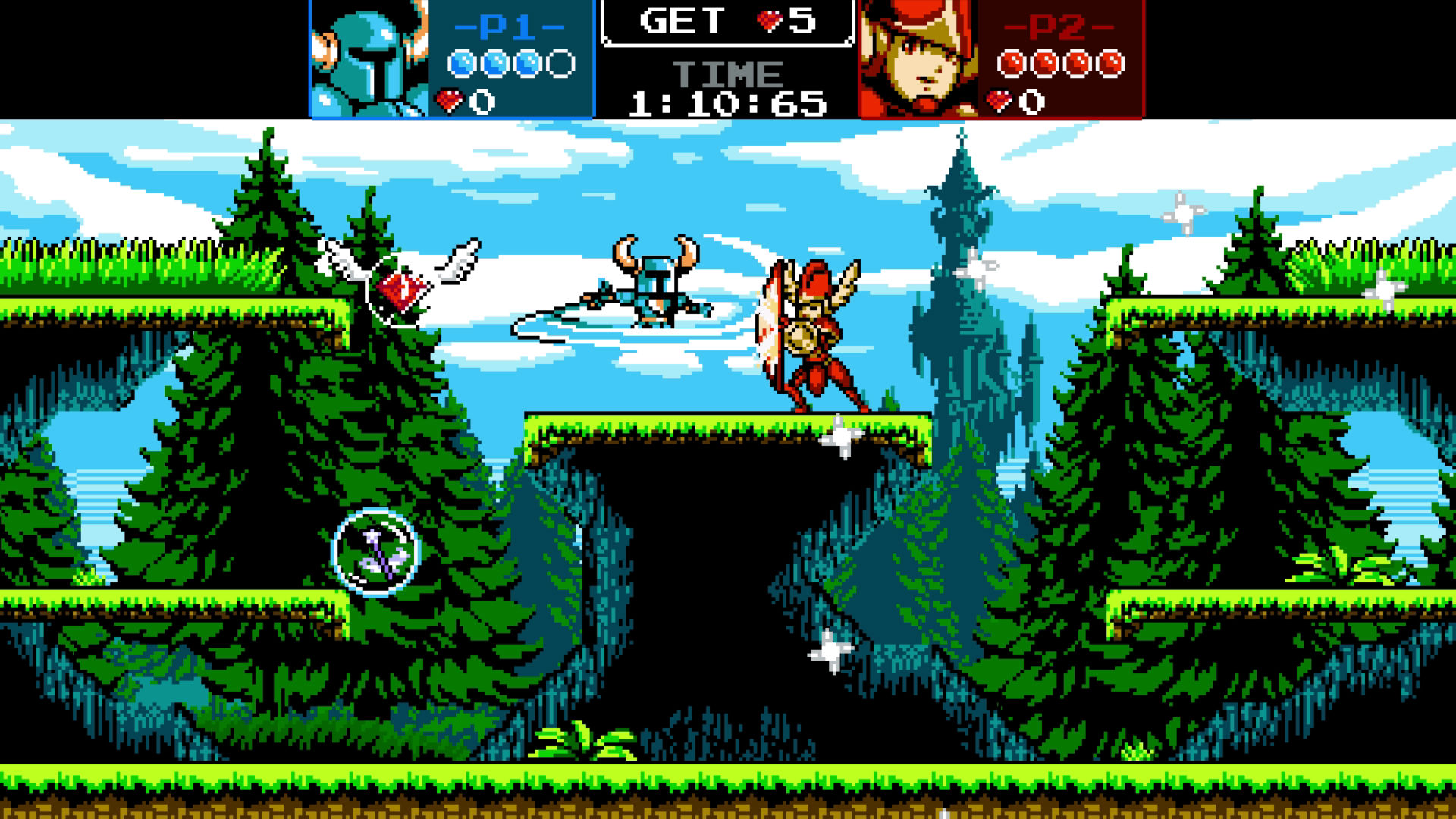 Showdown is practically a whole new game. There’s unlockables (costumes, stages, characters and other secrets) on top of light Smash-like story modes for each character, a full versus blowout for up to four players, a practice gametype and a “break the targets” mode. Characters have a movelist, you can go up against three other bots (all with different difficulty levels), you can set victory parameters (collect gems or stock/time). I can’t even begin to describe how long I’ll be enjoying the whole Treasure Trove enchilada for decades to come.

This is a historic moment for Shovel Knight: half a decade later, I can recommend picking up anything and everything Shovel Knight related, which is easy to do with the Treasure Trove compilation. Yacht Club Games has a lot to be proud of and has accomplished a lot in their short run, and I can’t wait to see what they come up with next.