Mick Jagger doesn’t need any of this

Underneath the vision of all but the most observant of people lay the secret lives of the animal kingdom. From the meekest field mouse to the mighty lion, each is born into a world of hardship and violence, where merely surviving is the ultimate goal. Humans, with our obsession over the minutiae of modern society, can’t fathom the sheer terror and panic that many animals face multiple times per day.

Few forms of media attempt to strip away the ties that bind us to the sentient, and force us into the role of a wild animal. The Shelter series has attempted with minimalistic graphics and gameplay to translate what it would feel like to be a scared and lonely new mother defending and providing for her litter. This iteration focuses on a family of lynx, and although you are a predator, the vulnerability of your position is poignantly felt. But even though Shelter 2 evokes a certain amount of emotion, the package leaves something to be desired. 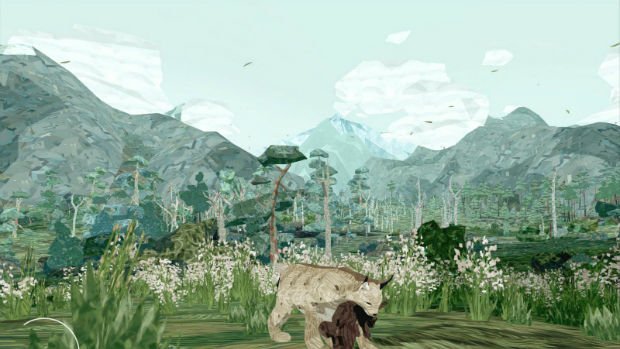 Beginning with a pack of wolves chasing you as a very pregnant lynx, Shelter 2 portrays itself as a game full of suspense. However, after some metaphysical assistance, you find a den and give birth to your four kittens. Although it was a bit nerve-wracking to wonder what was going to happen to my defenseless children, the beginning was the high point of the narrative.

I’m not sure if there’s a bit of random generation going on as far as events, but the only things that happened in my lives were: I had my kittens, I hunted and fed them for a while, they grew up, they slowly learned to hunt, they left me, I went back to the den and a small scene played, and the credits rolled. That was the whole game. Twice. There is some replayability in the form of playing as your progeny, who inherit the color of your coat and collectables. However, it only takes about two hours to finish, and those two hours are fairly lackluster.

What made the first playthrough somewhat interesting also happened to be annoying. There are no clues as to what to do during Shelter 2. There are a few tips that pop up at certain points, but they’re rarely helpful as they often appear after you have figured out the function they point out on your own.

This would be fine if the gameplay was intuitive, but it’s not. I spent a huge chunk of the game baffled as to what I was supposed to do. I thought, “Surely there must be more to this than hunting and feeding my kittens.” That was it, though, and even it was a struggle.

The controls constantly felt as though they were fighting against me. To hunt, you must simply run into an animal. However, on the keyboard, there’s no analog buttons or joysticks to make minute adjustments. So, if you’re chasing a small rabbit, and it turns, typically you’ll over correct because the controls are so insensitive.

Your cubs feed automatically once you catch an animal, but to eat yourself, you have to utilize the right mouse button, which by default is mapped to another function as well. Having contextual controls when the default method of control is a keyboard and mouse is bad design for a title that has so little complication to its control scheme already. 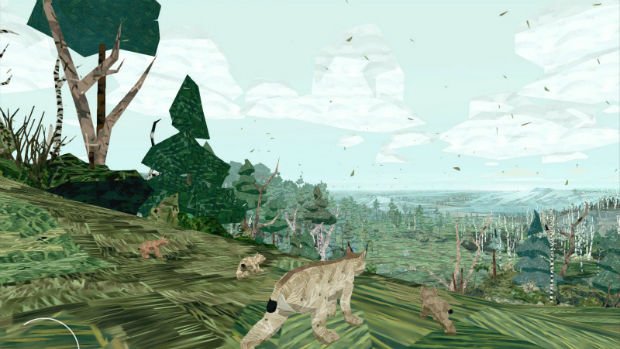 Visually, I initially liked the watercolor aesthetic. However, when I started playing, it started getting in the way more than it pleased the eye. Trying to track a small darting target through an abstract playfield is infuriating. I can’t see it as a way to simulate the vision of a lynx either, because big cats usually have great motion tracking.

There were many times when the odd textures and color scheme would hinder depth perception and I wasn’t sure if my prey had despawned or ran into tall grass. There is a “sense mode” you can activate to subdue the colors and highlight prey in red, but you can’t use it while running, or for more than a few seconds at a time. Having more freedom with sense mode would have done quite a bit to allay my frustration with the inability to distinguish motion easily.

The textures are just awful as well. They’re constantly clashing, with the sun looking like a ball of churning blonde hair, bushes being pixelated blobs, and the whole thing looked like the results of the airbrush tool in MS Paint. When you run, there is some sort of blurred effect on the sides of the screen which I at first thought was screen tearing. It was such an odd visual design choice, especially since certain scenes looked really good, such as the initial scene approaching the den with the constellations in the background. It’s a shame, because with a little more detail with the textures and colors, the visuals could have looked unique and popped.

As of writing, Shelter 2 is still fairly buggy. I was constantly having both my kittens and prey clip into things and lose their pathfinding abilities. At times models would oddly rotate into the ground, and this took away from the small things it did right. It’s hard to feel caring and empathetic towards your kittens when they start walking steadily into a boulder, or sink through the ground. Also, sometimes I would be chasing prey and it would simply vanish. That was the final straw with my chance of enjoyment. If a game is only two hours long, doesn’t have a large scope, and has issues with the few things it does do, bugs are a sign that it’s not just my personal tastes that are keeping me from meshing with it. 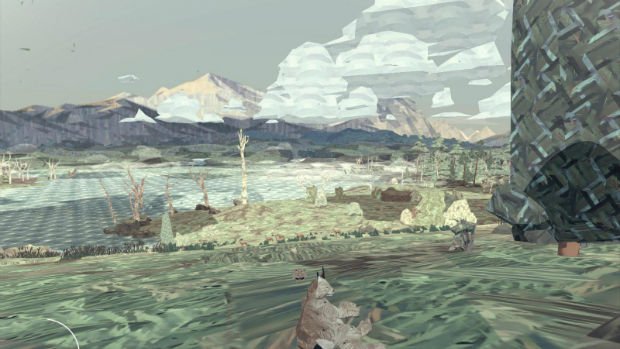 I have heard that there are some antagonists in the game world in the form of randomized wolf encounters, but I didn’t run into a single enemy through two playthroughs. Lack of an adversary coupled with the dearth of any real reason to explore and the terrible map had me staying in the same little swatch of territory for the entirety of both runs. Maybe this resulted in missing some sort of huge point, or something really cool to see. However, even if that is the case, the game certainly did a poor job of encouraging me to do anything outside of feeding my spawn until they left me high and dry.

It’s a shame, because Shelter 2 covers a subject matter that isn’t touched on very often. Projecting the human thought process into a role of a creature that lacks the ability to understand what we find so precious without anthropomorphizing it is a tough thing to do. Something went wrong in the design process. For all its flaws and little to no redeeming qualities, I cannot recommend this game. I really wanted to enjoy the adventure of living as a lynx mother, but technical flaws alone have me wary of playing another Might and Delight title. Although the game is only $14.99, the entertainment value offered is far below that.

I recommend sitting this one out for a while and seeing if patches add content or functionality.