From the very moment I began at the title screen, this game would echo questions through my mind. I’d question the mental construct of “life or hometown”? The dilemma of who is “best girl” and if love can truly bloom on the wet-breast-infested battlefield on the beach named Peach… As well as if Wet 2 would ever be released.

I still have no idea, I’m sleep deprived, but I do know this: Senran Kagura: Peach Beach Splash is a new game in the ongoing and popular Senran Kagura series, a game that will also celebrate the sixth anniversary of these large-chested shinobi that continue to grow in popularity with each release. 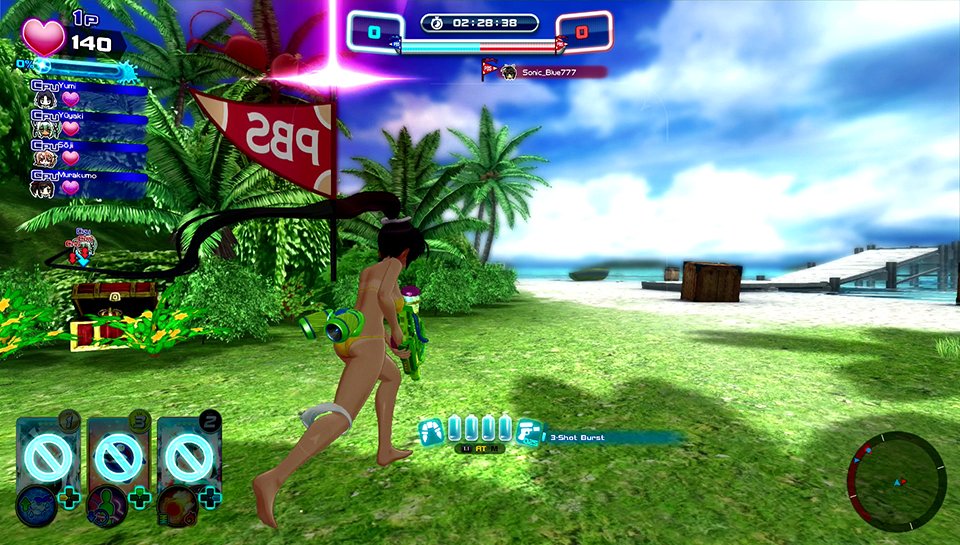 Peach Beach Splash is your not-so-typical team-based third-person shooter. The primary mode is “Single Splash” featuring the main story and meat of the game itself. The story is broken up into five different campaigns, each with their own characters to choose from and all of which roughly take a little over an hour to complete, depending on the difficulty.

There are also “Paradise Episodes” — smaller, more condensed storylines you can unlock as you progress through the main campaigns. These feature everything from riffing on Pokémon GO to essentially fighting over sushi. And lastly, another mode known as “V-Road challenges,” which can be summarized as a series of small tournaments you can compete in with your own custom loadouts and team of characters.

Each time you win a match in any of these modes, you’ll unlock various card packs to open up, allowing you to equip new skills and upgrade weapons and existing skills you have equipped. Admittedly the art-work on the various card packs is incredibly well done, despite being pretty raunchy at times. You’ll also earn zeni (the in-game currency), which you can spend in the shop on various items, such as different clothing and accessories, to more card packs to open.

The main plot itself is fairly simply: various teams of shinobi have been called upon to compete in a water-gun tournament (which apparently has existed since ancient times), for a grand prize of anything of their choosing. Each campaign has somewhat of a sub-story between the characters, ranging from not wanting to graduate so they don’t get separated from one another, to trying to solve the mystery behind the competition itself.

The writing for the most part is lighthearted and doesn’t take itself very seriously. The dialogue for example is filled with plenty of sexual innuendos and just the right amount of fan service that will make you close your bedroom door and lock it for good measure. On that note of fan service though, as a general and obvious warning, this game is loaded to the brim with fairly explicit content.

As an example of this, a notable menu option is titled “Dressing Room / Shower.” Here you can change the clothes of various characters, view character models, and set up dioramas letting you pose different characters. You can also squirt water in various colors at character models; in the Japanese release, there was even DLC for a white and yellow option… 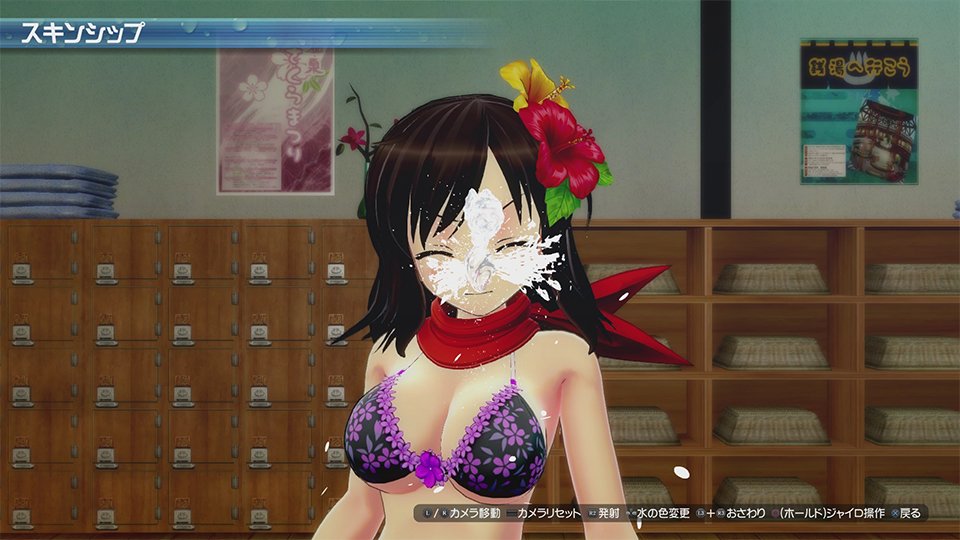 …because of course there was.

In terms of presentation, Peach Beach is bright and vibrant with HD visuals and a consistent frame rate, but the texture work in the maps leaves much to be desired. Thankfully the character models and their gravity defying jiggle physics look solid enough. As for the soundtrack side of things, I wouldn’t say it’s memorable, but it’s up-beat enough to set the mood nicely.

As for the gameplay, overall it’s your pretty standard affair for a third-person shooter (just now in water-gun form), with a small variety of weapons you’d expect ranging from assault rifles and rocket launchers to some more unique ideas like garden hoses. The matches you’ll encounter in the story are fast-paced and vary from either surviving waves of enemies, to going against other teams for plot reasons. It’s fun and engaging enough to hold your interest for a few hours as you blast bikinis off busty characters, just don’t expect your fellow team members to be much of a help.

Which brings up my biggest issue with Peach Beach Splash: the AI is downright horrendous. You’ll constantly see friend or foe alike getting stuck behind walls or completely ignoring objectives altogether. It becomes extremely frustrating on the harder difficulties during each of the campaign’s boss segments when your entire team gets floored within moments because they’re aimlessly running around with no concept of mortality. 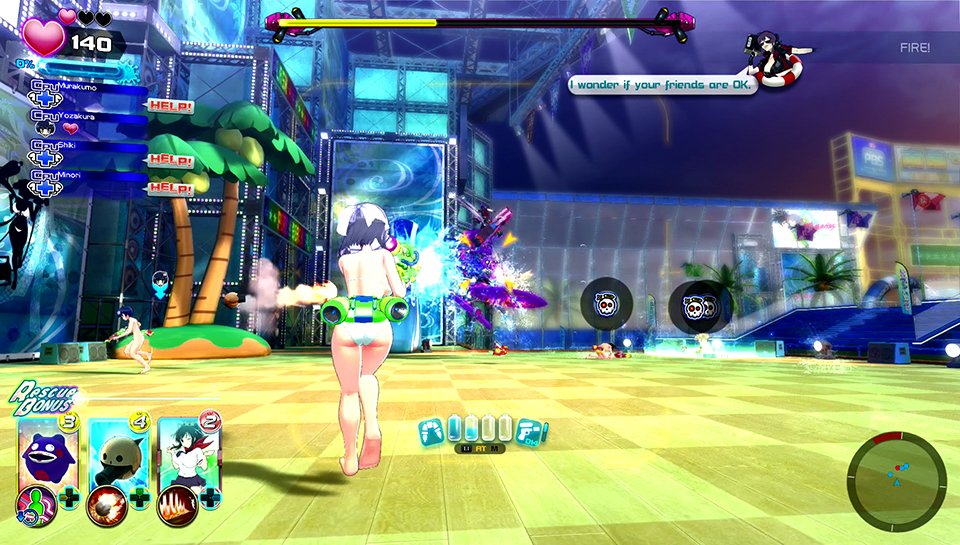 The next primary mode is the multiplayer, known as “Multi-Splash.” The multiplayer is broken up between three categories: Ranked matches, free matches, and survival co-op. As of writing this review prior to the game’s official release, I unfortunately wasn’t able to connect with many players (almost none at all). So my experience here was primarily dealing with AI-controlled bots, and as I already mentioned — the AI in this game is questionably bad.

It also probably explains why modes featured exclusively in multiplayer such as “Capture the Bra” and “Queen of the Hill” aren’t featured in the single-player and story aspects of the game. The AI bots couldn’t seem to grasp the concept of these modes. In capture the bra for example, I’d simply just go around the edge of the map, grab the flag, and go back. All the while my bot-controlled teammates and the bot-controlled opposing team would just mindlessly kill one another, not paying any attention to the flag or objective whatsoever.

If you weren’t a fan of the past Senran Kagura games and considered them far too raunchy, Peach Beach Splash isn’t going to change your mind. But for me, it manages to balance fan service with fun and engaging gameplay; albeit not very challenging or complex gameplay, thanks in part to some of the worst AI I’ve experienced in a long while. If large wet anime chests float your boat, you’ll be right at home with Senran Kagura: Peach Beach Splash.