I’m loving how much easier it is to bring indie games to consoles this generation. With tons of nasty hold-ups like WiiWare sales thresholds, lengthy and expensive certification and patching processes, and a general negative attitude towards indies by big publishers, every console manufacturer has made strides in that department.

In the case of Secret Ponchos, Sony actively helped developer Switchblade Monkeys bring their game to the PS4, by offering up development kits and additional assistance. That partnership paid off as Ponchos has just launched by way of the PlayStation Plus program.

It turns out that it was an endeavor worth pursuing, but I’m hoping there’s more meat on its bones down the line. 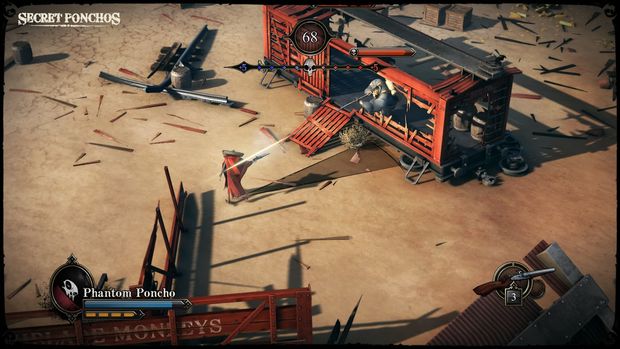 Secret Ponchos is an arena-based twin-stick shooter set in a western world. It’s also almost entirely online, barring a small one-on-one split screen mode. Heck, there isn’t even a real tutorial of any kind; instead players are thrown right into the fray with others after creating a character. “Creation” is actually a strong word, since you’re basically picking from five pre-set characters (much like a MOBA) and adding in a few stat customizations.

All of the current characters have personality in spades though, like the ominous-looking “Killer,” who uses a mid-range revolver and knife, the burly Deserter who prefers a hunter’s rifle, and Kid Red, who’s specialty is dynamite. There’s also the female Matador and the death-flavored Phantom Poncho, who both prefer close combat. While the actual cast count is very low, all of the characters feel balanced and enjoyable in their own way and sport their own unique art styles.

The twin-stick setup is dead simple, as each of a character’s two weapons has a primary and secondary rate of fire. Players can also dodge using an evade button and get into cover at will. Easy enough, right? But once you start to really learn each combatant’s ins and outs, Secret Ponchos gets a lot more interesting. The crux of the design philosophy is that nearly every move or every shot needs to be done deliberately.

Players will soon learn the limitations of the characters’ range, their low ammo count, and how they will react in ranged and close quarters situations. The evade button simply can’t be used at will, as each roll needs to be charged up over time by way of a stamina meter, forcing constant tactical choices — do you charge in, or save the meter for a quick escape? Ammo conservation is perfectly on point here, as characters can’t just rush in and blow away a whole team without making the most of their bullets and time.

The lack of a tutorial is kind of cool in that players are left to their own devices to figure out each character’s nuances, but it’s also annoying at times. For instance, I didn’t realize at first that the Killer’s knife costs stamina, and since he starts with so little of it, I thought the weapon was glitched for a few rounds because it didn’t work. The fact that characters have to manually switch to their second weapons is also jarring at first, especially since the L1 and L2 buttons are doubled up in terms of functionality — they could have easily just triggered the alternate gear instantly.

Visually, Secret Ponchos reminds me of a current-gen Commandos, which is only a good thing. It’s extremely impressive on a technical level, and all of the action is silky smooth even online. Each stage has its own feel to it, and there’s a ton of detail in nearly every facet of the game — “polished” is an apt description. I experienced little to no slowdowns, and as a result, everything felt that much more intense. The netcode is also reliable in my experience, as lobbies are filled and connected pretty quickly. 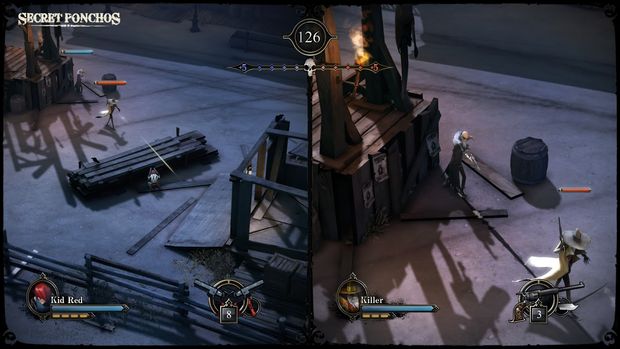 Where Ponchos starts to fall apart though is in the variety department. While the character count is more acceptable because they’re all worth playing, there are only a scant three modes at the moment that support up to eight players — free-for-all, team deathmatch, and domination. Sadly, the latter isn’t even a “zone capture mode,” as it solely consists of a tug of war of kills. Also, there are only five maps to play on.

That’s it. There’s no story or narrative to distract you from the lack of maps or interesting modes, just round after round of blasting people away online. There is a ranking system that makes you more “Wanted” (and thus worth more points) as you climb the charts, but it’s not really noticeable most of the time. Those who have a friend to play with via split screen will probably get a lot more play out of it, as it supports two-player online (so long as the modes are team-oriented). In terms of extra content right now the developers seem to be going the League of Legends route with optional skins, priced at $2.99. It’s completely acceptable since it’s all optional content so far. 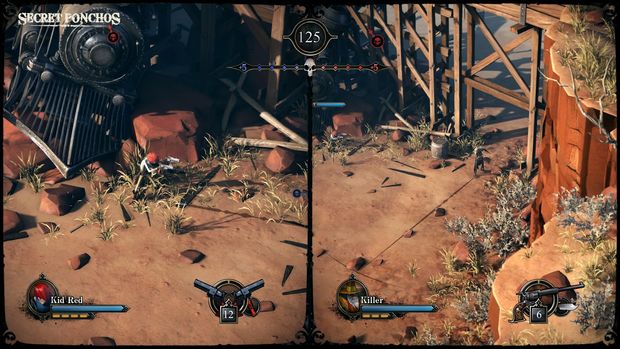 The bottom line though is that the actual combat is fun, and if you’re itching for a competitive shooter this will satisfy you. I’ve been playing for hours at a time in some heated sessions, and nearly every game has a “wow!” moment. After playing each character and learning their counters it gets even better. The deep mechanics simply allow for memorable gunfights to happen constantly, and if the developers can keep the community from jettisoning they will have a minor hit on their hands.

Although the foundation for a great online twin-stick shooter has been laid with Secret Ponchos, it’s going to need more content and a meatier core mode to really keep people interested — until then, I think the game will struggle with keeping some of its community. Personally, I really hope that Ponchos catches on and doesn’t have to ride into the sunset.