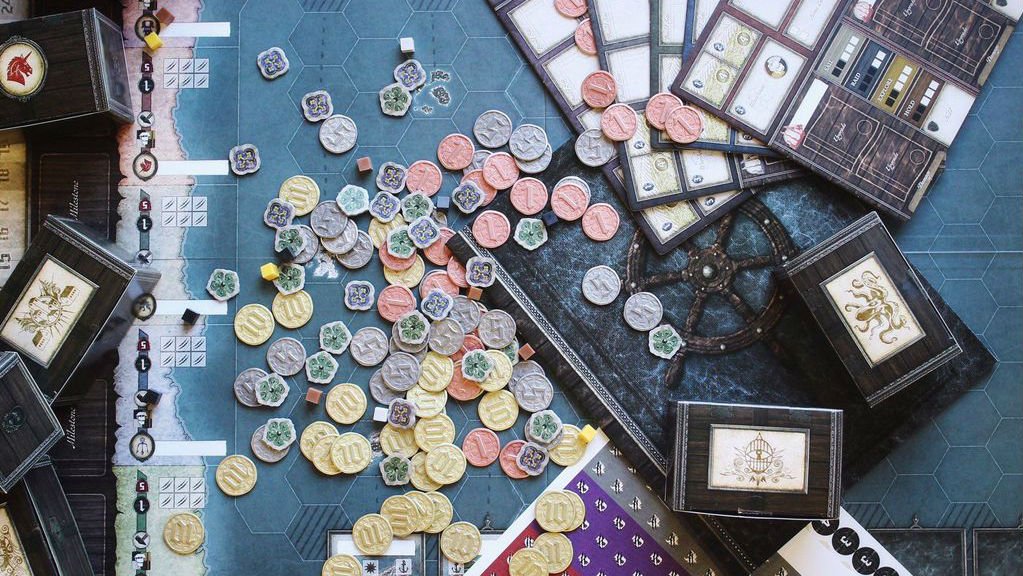 …And it can’t get up

As we move forward in board gaming’s current golden age, new games are coming out at an incredible pace. Even so, many provide only new dressing on existing ideas. Once in a while, something comes along that feels so new and different, it invents a genre. We saw it in 2008 with deck-building, then again in 2011 with the legacy concept.

To be fair, legacy games haven’t exploded since Risk Legacy introduced permanence and destruction to a community that values keeping its entertainment in pristine shape, able to be played as originally intended in perpetuity. It wasn’t until the past couple years we saw titles like Pandemic Legacy and Gloomhaven release.

But SeaFall was the one I was most excited for. Heck, it was my most anticipated game of 2015 (never mind that it eventually released in 2016). It was going to be the first fully original legacy design (where Risk and Pandemic are already things that existed before their legacy versions) and so it would be designed from the ground up with a persistent campaign in mind.

It looked like it would meet my lofty expectations in the beginning, but holy cow did it fall apart the further in we got. 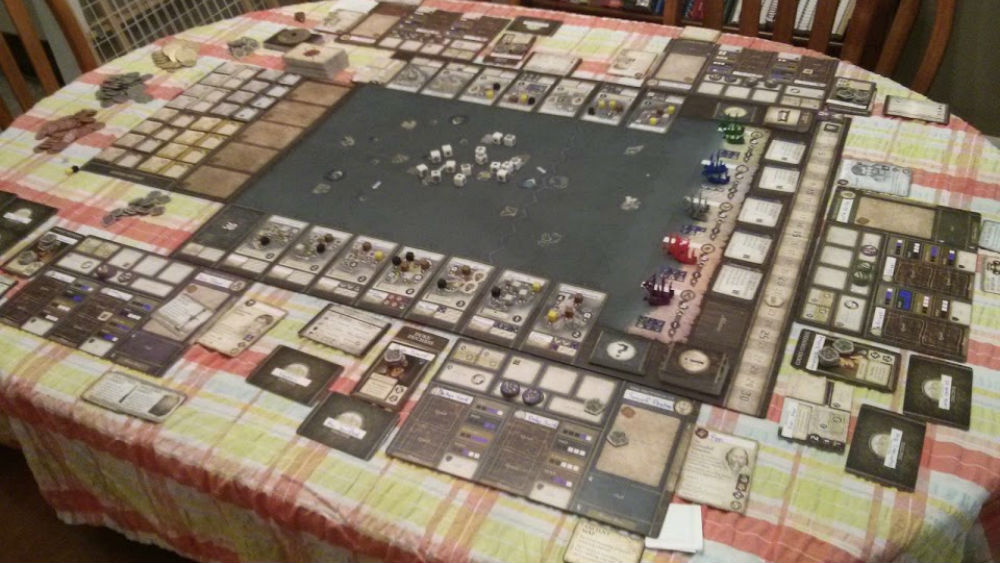 SeaFall‘s first misstep happens before the box is even opened. It describes itself as being “4X-inspired,” taking place across a vast uncharted sea during the age of sail. The 4X inspiration seems clear during the early games. There are four groups of actions a player can take, each represented by one of four different guilds.

The Explorer’s Guild is the easiest to tie to one of the four Xs: explore. At the beginning of the campaign, there are a handful of nearby islands, each with unknown sites ripe for discovery. Soon into the campaign, new islands with new special rules can be discovered as well.

The Builder’s Guild actions are SeaFall’s representation of the second X: expand. By using money earned and goods traded for, players can increase the capabilities of their ships and provinces.

The Soldier’s Guild takes care of the final X: exterminate. Rather than peacefully trading with the locals, players can take what they want through force, but with this option comes the risk of failure and more resistance from the targets over the course of a campaign.

In theory, a winning strategy would be to dip into each of the four different guilds when the opportunities arise. And for the first few games, that idea works. There are several unlockable boxes that open up when certain conditions are met, and the first couple have something for everybody, regardless of which X is the preferred path to gaining glory points.

About one third of the way through the fifteen or so games that make up a campaign, that balance goes off the rails in a big way. Games end when one player reaches a target score, so it’s a race to get there. Eventually, the only viable way to keep up is through exploration, which results in huge swings of points, sometimes awarding as much as half the target score, and other times awarding nothing. Favoring one of the other guilds is a way to definitely lose, but favoring exploration still leaves fate up to chance.

One of the problems with this change in tempo is that it happens far enough into a campaign it may be counter to a player’s initial long-term strategy, and that person will be playing catchup in terms of upgrades. After each game, players can improve their ships in one of four categories, and if somebody bumps exploration early on, it grants a huge advantage later. 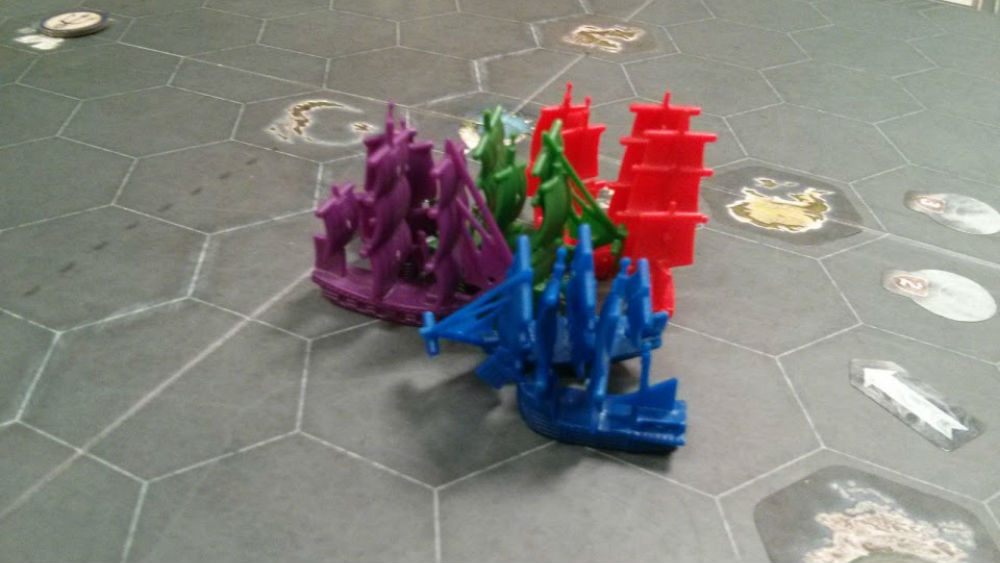 Speaking of catchup, there is a mechanism in place that offers a bit of rubber banding, but it’s far too weak compared to the benefits a player gains for winning. Players who are behind the leader in total campaign glory points start the next game with bonus gold or resources, but winners can get the same through permanent upgrades. While the catchup mechanics may allow people trailing to eke out a victory later on, it does nothing to allow for a comeback. Our campaign saw a severe runaway leader, where the overall winner was pretty clear halfway through — and we still had about eight more games to play to see the end.

And these aren’t short games. With a fully stacked game of five players, we had games last as long as five hours apiece. The irony is that while each game took way too long time-wise, the race-to-the-finish aspect of it and huge swings in glory awards made it seem all too short turn-wise. Since the game ends abruptly and sometimes with little warning, one could have a three-or-four-turn plan dashed and be left scrambling trying to find a way to scrounge up just a point or two in the last moments.

Something went awry in the development or testing, because in an early designer diary, Rob Daviau mentions that a typical game should last 12-to-15 turns. We had one game go as long as 12 turns; most later games ended on turn 6 or 7. It’s just enough time for somebody to get a windfall of points from some exploration target, but not enough to build an engine or feel accomplished. 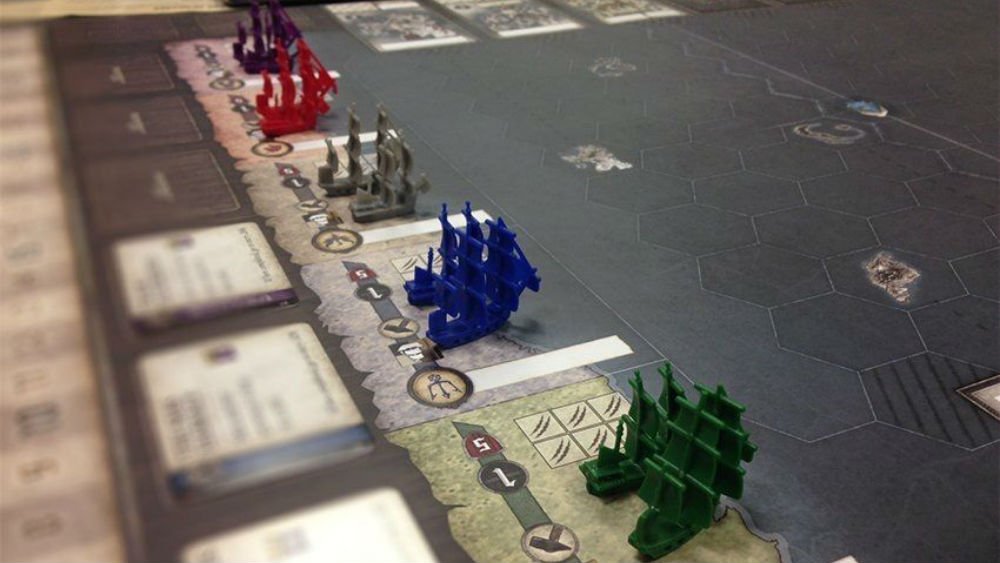 If you’re one to skip ahead to see the review score and then leave a comment, well, you won’t see this paragraph. But on the off chance you do, know this: if I had rated this game after having only played one or two sessions, I would have given it an eight.

For a while, this game invaded my psyche, almost like an infection. In between sessions, I spent an inordinate amount of time thinking about strategies, planning my opening moves, emailing the other people trailing behind the leader in an attempt to find a way to catch up, and even mathing out how we could most effectively gang up on the leader. I probably had more fun in between games thinking about it than during games actually playing it.

In the beginning, there is so much excitement when unlocking new content and rules, so much hope for where this story is going to take us all. By the end, all of those unknowns are crystallized into what SeaFall actually is, and all the wonder associated with it is lost, because it does not live up to the perhaps-unfair expectations I had in my head.

It does some inventive things and contains some amazing moments, but it’s such a slog to get through that the magic is gone by the time we closed up the box for good.