After four retail entries, the Scene It? series has finally made the jump to the downloadable arena. Scene It? Movie Night is essentially a Scene It? downloadable content platform for Xbox Live Arcade and PlayStation Network, with Mega Movies as the first pack included in the package.

If you’ve played Scene It? before, you probably know what to expect. 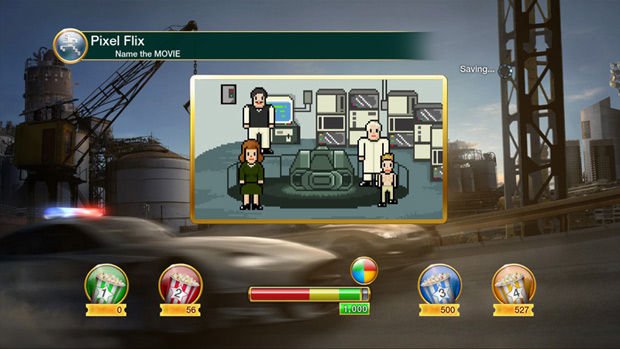 Scene It? Movie Night is, like the other console iterations that came before, an assortment of movie trivia mini-games. As you might have expected, Movie Night is somewhat of a “lite” version of the previous Scene It? games. Luckily, most of that concerns the presentation alone. There are no avatars bouncing all over the screen and trivia mini-games are introduced with much cheaper animation than before, but both are things you can easily live with.

The core of the Scene It? videogame experience is still intact, so if you’ve played these games before, you’ll feel right at home again. Movie Night only offers one mode with seven rounds, two of which are always movie clips trivia. That means most games will last around 10-15 minutes instead of offering the option between short and long games as in the “full” console versions. It also means that some of the fan-favorite mini-games like Pixel Flix — an 8-bit representation of a movie scene — can take multiple sessions to encounter. You can’t configure anything about this one mode other than enabling “Buzz In” or not, which is a bit of a shame yet understandable given the way Movie Night handles scoring.

With only one scoring mechanism in place, Movie Night opts for a safe approach. A score bar, divided into green, yellow, and red sections, indicates how many points you’ll score, with the green section’s always giving you the maximum score. Only during the game’s final lightning round mini-game, Quick Pitch, will you actually lose points by selecting an incorrect answer, provided you didn’t enable the “Buzz In” option. With “Buzz In” enabled, only the person who buzzed in stands to lose points throughout the game (half the amount they buzzed in for), so you had better be sure you know the answer before buzzing.

Despite being a downloadable title, Movie Night doesn’t feel that different from the regular Scene It? games. The compression on the movie clips results in some artifacts if you sit too close to the scren, but otherwise it’s the same game, just tailored for quicker sessions with seemingly less trivia questions. The Mega Movies pack focuses on big hit movies, and while it’s debatable whether or not some of the choices belong in here, it’s on par with the type of movies in the other games. From Ghost and Road to Perdition to more contemporary movies like The Social Network and X-Men: First Class, these are all movies that the general public at least has heard of. The range of movies included seems to focus on the 1970-2010 decades of blockbusters, so you shouldn’t expect any trivia about what Fritz Lang’s character’s name was in Contempt or anything like that.

That doesn’t mean you’ll stand a chance against veteran movie trivia players if you don’t know much about movie details, though. Some trivia mini-games that require you to order movies by their year of release or to choose actors based on names of characters they’ve played can be very hard to guess correctly unless you wait for all the hints to gradually reveal themselves. The “Quick Pitch” final round does even out the odds somewhat, with generally easier questions and higher scores that allow any casual movie fan to quickly ramp up their scores and catch up, which in turn increases the playtime you’ll get out of this title before your friends will never want to play with you ever again. 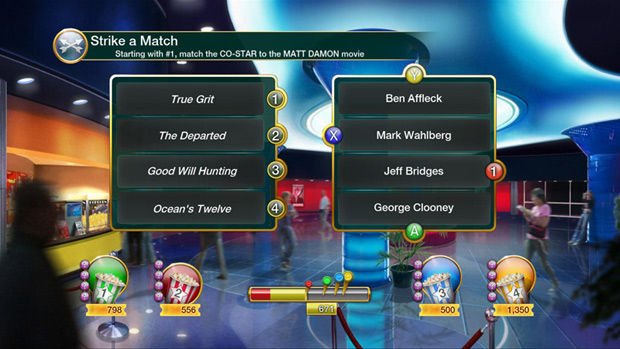 As a platform, Scene It? Movie Night is a safe and inexpensive option for those who don’t want to pay full price for the console games, although the older Scene It? games can probably be found for cheap by now. The concept of different DLC packs for different genres is interesting — a science fiction pack is promised to be on the way — and will hopefully end up letting you tailor the game for the kinds of movies you and your friends enjoy the most (i.e., if you don’t expect them to know Twilight is set in the town of Forks). Just like the platform itself, the included Mega Movies pack is a safe bet meant for everyone and unlikely to offend anyone.

However, and this might be a deal-breaker for some, Scene It? Movie Night offers local multiplayer only. If you were planning on setting up an Xbox Live party and jumping into a game to trash-talk about movie trivia with your friends, that’s just not going to happen with this game. This is a bit disappointing since online multiplayer would’ve made it that much easier to play with your online movie buff friends, even if it’s unsurprising given the lack of online play in the past Scene It? games. Still, this is a party game at heart, so if you don’t have any local friends that are around your level of movie trivia expertise, you might want to give it a pass as solo play won’t stay interesting for long.

Scene It? Movie Night and the Mega Movies pack provide a fun movie trivia party experience that keeps the Scene It? gameplay intact in a downloadable slice. It might just be that cheap little game to keep the family occupied over the holidays, but you had better have some local friends to play it with.