I’m the kind of person whose ears instantly perk up at the sound of a interesting name. After all, your name is one of the first things someone learns about you, so why wouldn’t you want the best one? With that in mind, when the deafening thud of something called Sausage Sports Club flopped down across my desk, I knew I had to check it out — regardless of what it actually was.

As it turns out, the title is pretty indicative of what the game actually is. While it may come up a bit limp at times and the action doesn’t always rise to the occasion, Sausage Sports Club is an endearing little title that does just enough right to satisfy this very demanding reviewer. 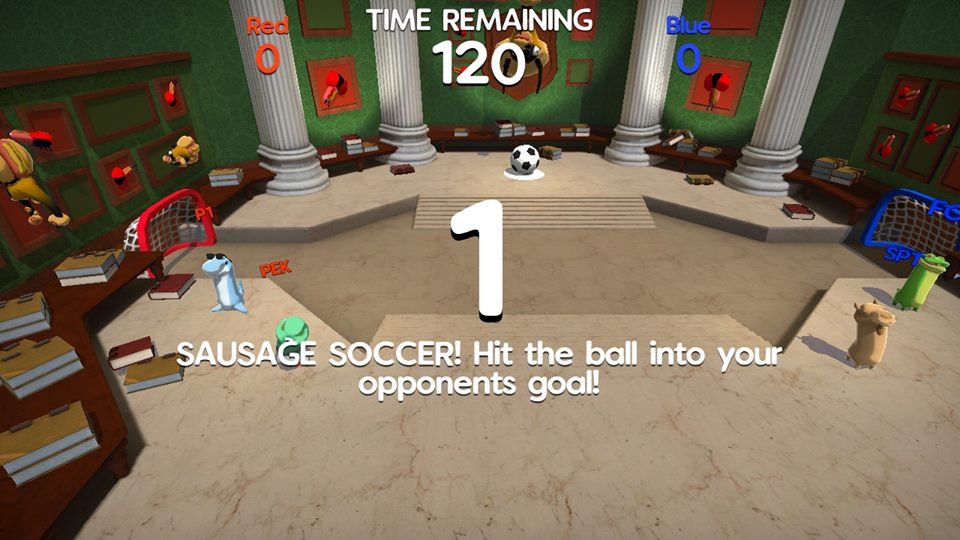 Sausage Sports Club is a sports party game where you control adorably floppy animals as they shuffle their cute little legs around the screen, limply swinging at things and standing erect again as they go. You compete against up to seven other players (human or AI) across five game modes, with the objective of each to helicopter-neck your way to victory.

The controls are simple enough — A and B jump (tap twice to slam down to the ground), X and Y dash, and the right stick slings your head about, flopping it to and fro and all around. ZR flops your head straight down in a flaccid heap and ZL makes you stand tall and stiff, but neither seem to have a specific purpose other than to look funny. While jerking your head around in a circular fashion is fun, the dash is the move you’ll be using most, as most game types more or less require it to succeed.

The game modes themselves are very straightforward. You have Soccer… which is soccer; Coinz (yes, with a z), where you have to hit your opponents to get them to drop their coins and collect them to end with a higher tally; Capture the Flag, which again, is exactly what it sounds like; Sumo, where you have to bash your enemies either off the map or into spikes, and Paint, which is a Splatoon-esque mode where running will paint the map your color, while a giant ball, producing the color of the player who last touched it, rolls around the floor. While five types doesn’t sound like a lot, I’m told that it’s average and it’s what you do with them that counts.

Unfortunately, not all game modes will be able to get it up when the gameplay starts to get hot and heavy. Soccer does a good job of lasting when it counts, especially as more balls are squeezed in as more players enter the arena. Coinz can be fun with lots of players, as the coins themselves start to litter the map and it becomes a mad dash to grabs coins as you’re being tossed around. The other game modes can be fun in small bursts, for sure, but really start to falter off after a few rounds. Sumo and Paint are especially disappointing, as the former suffers from far too many accidental deaths (the point is to kill others, not to lose all your lives by walking into spikes every three seconds) and the latter just feels broken as it never really seemed to follow its own rules. All of the game modes are fun and the gameplay is far from boring, but naturally some just hold up better than others. 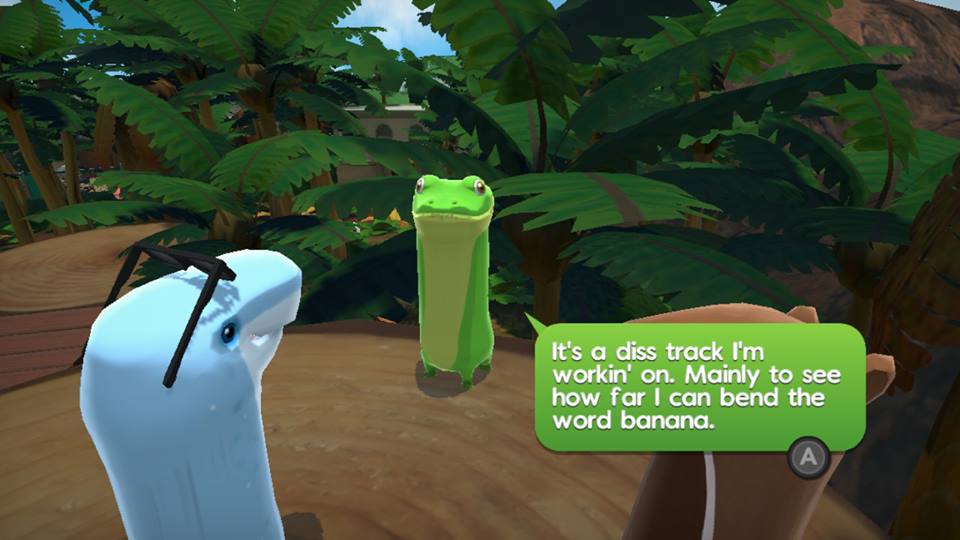 The fact that there are only four stages compounds the issue of some of the minigames just not being able to go the distance. Some stages are far better suited to serve specific game types, and can be downright terrible for others. The aquarium stage is great for Sumo, but awful for everything else, whereas the city stage is fantastic for Coinz, but almost unplayable for Soccer. There’s a weird balance to the game where, in the right position and approached from the right angle, it’ll feel amazing once you get into the action – but dropping in without considering what goes where best will ensure that nobody walks away feeling good about the experience.

Luckily, the game’s Adventure Mode goes a long way to insert some much-needed charm into a game that could otherwise run the risk of going through the motions. In this mode, you’ll still play the same minigames across the same maps, but in between matches you’ll be tasked with helping the denizens of Sausage Sports Island with tasks, such as picking outfits, writing poems, or settling disputes. Each scenario ends with a match in one of the random minigames, but the writing is silly and definitely keeps you wanting more in between sessions. The whole mode plays out as a three-day “season” of sorts, where in between each day of action a commentator (a super-cute corgi, no less) will recap the action, with there even being a champion at the end. It’s a great little mode, and while it’s a bit lacking in length it’s definitely worth the ride. 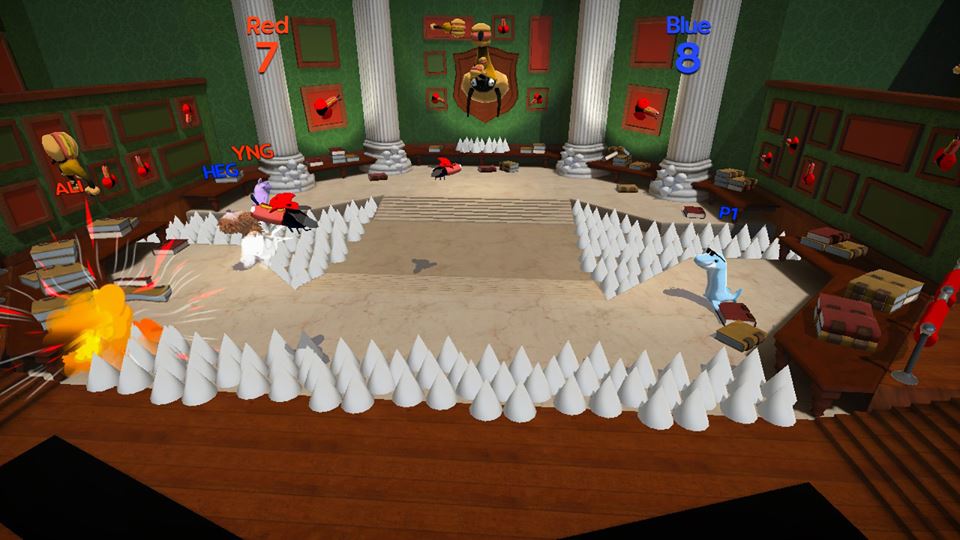 While you’re not slamming your sausage animals around the screen, there are unlocks tied to coins and experience points (of sorts). As you play, you’ll earn points toward a new loot crate-style reward, which is either new animals friends to use or new skins. Coins are also picked up in Adventure Mode from interacting with objects and completing tasks, and go toward unlocking new hats for your characters to wear throughout your game. I know “loot crate” is a bit of a loaded term these days, but really it’s just a random unlock you get from playing the game. There’s no monetization of it, and it’s just a way to get stuff to encourage you to keep playing with it until it’s spent.

I did encounter some performance issues during my time with Sausage. For starters, it seems that changing the game type at the end of a match without backing out to the menu first will render the next game type almost unplayable. So, if you end a match of Sumo and fire up Soccer without quitting out of the map, the spikes from Sumo will remain on the map, breaking that game type. If you switched to Paint, the paint won”t even cover the floor, so you literally can’t win or lose the game without quitting. This also once led to a match where the framerate dropped to about 1 FPS for no reason, forcing me to reset my Switch. Also, there is no online play at all — the game is strictly couch co-op. I didn’t suffer any lag with up to eight AI players, but can eight controllers even connect to a Switch? I’ve never tried to take on that many units at once. 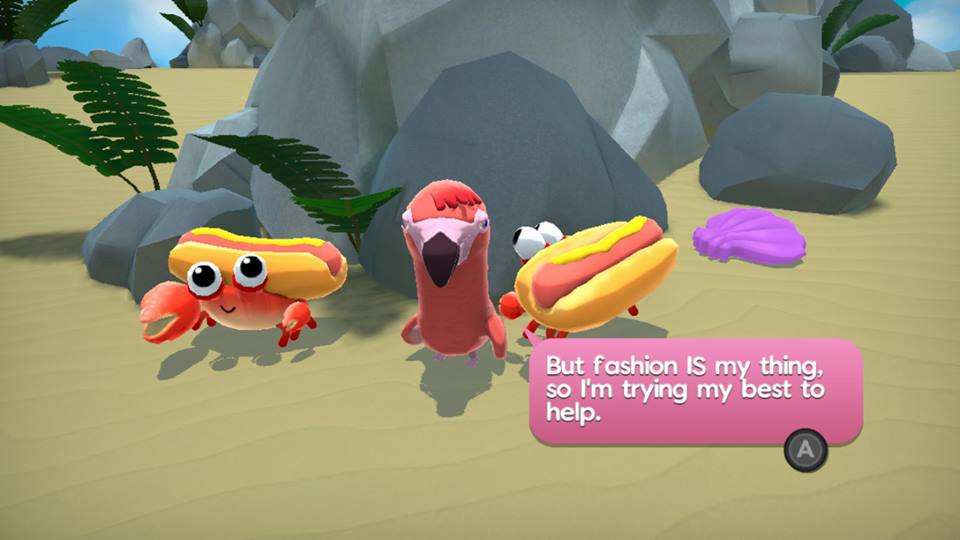 Sausage Sports Club isn’t a particularly girthy game, and the motion of its ocean is sometimes a bit choppy, but ultimately this is a unique and charming party game that’ll leave your group of friends sloppily coming back for seconds.

Just try to give it a little time between rounds — it won’t last all night.