The Spirit of Fighting

Fighting games had mostly died off before Capcom resurrected the genre with Street Fighter IV in 2008. While there were plenty of niche titles to fill the void in between, nothing had grabbed the public’s attention like what Capcom’s revival managed. Ever since that time, basically every series you could imagine has come back and been done justice…save for a few.

At roughly the same time that Capcom was revitalizing fighters, SNK basically struck out with its premiere franchise Samurai Shodown. To put it bluntly, Samurai Shodown Sen was anything but good. A once highly respected and very technical series, the poorly executed Sen assured that the series would be taking a lengthy hiatus after how poorly it performed.

Thankfully, life isn’t completely terrible. After nearly a decade, SNK announced that it would be rebirthing the series with a new entry. The time away has seen SNK give us some great fighters, so it was only a matter of time before Haohmaru and co would return. For the most part, they’ve nailed it, too. 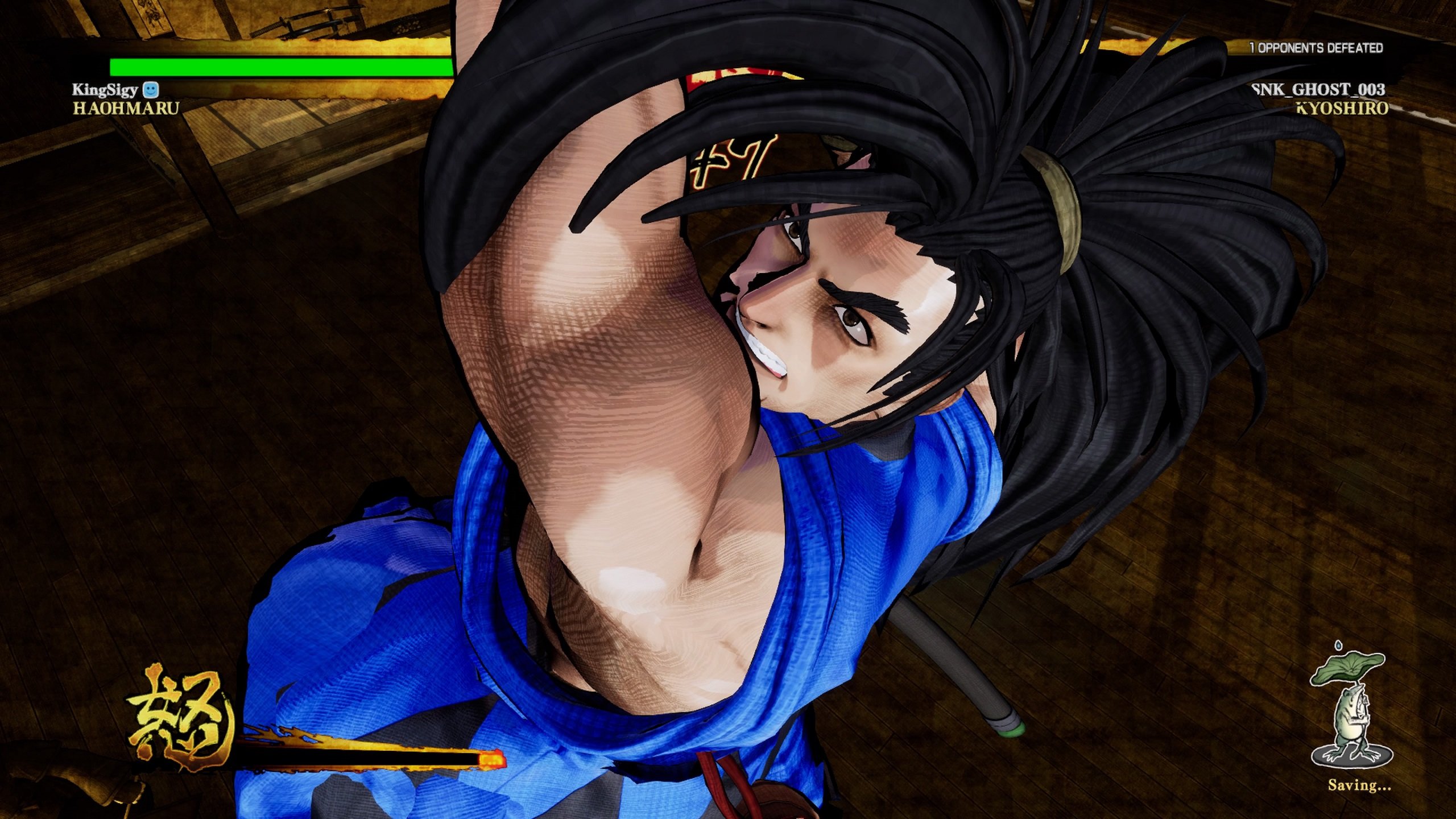 Samurai Shodown, not to be confused with the original of the same name, is a soft-reboot of the series that slots between Samurai Shodown V and the original. While that likely sounds intimidating from a story perspective, the whole point of SNK winding the clock back so far was to ease players into this long absent series. If you have no prior knowledge of the events from any of these games, you could easily jump into this new one and feel right at home. While something has happened before, it’s not all that important to what Samurai Shodown has going on.

In fact, the “story” mode isn’t really a fully featured campaign, so much as it is a replacement for arcade mode. Each character will go through their own little journey and reach a conclusion that is distinct from one another, but you’re not going to get interconnected cutscenes or some overarching plot that binds everyone together. This is a very classic arcade experience, through and through.

That shows the most with how this plays. Instead of trying to pump a bunch of different mechanics or systems into the fabric of this title, SNK has wisely chosen to dial back a lot of the fluff that Samurai Shodown had acquired over the years. In essence, this newest entry feels remarkably similar to Samurai Shodown V, axing things like Slash and Bust versions of characters and removing some of the more complicated special moves from the roster.

This helps bring the game back to the essence of what the series was about: Samurai Duels. In a realistic samurai battle, people weren’t flipping around the arena or landing multi-hit combos on each other. A lot of times, a single slash was all it took, ending a life in a graceful display of weapon mastery. Samurai Shodown isn’t that strict with re-creating fact, but it captures the same tension and anguish that such a scenario likely elicited.

You could reasonably find success in this game by ignoring special moves and focusing on range, timing, and patience. If your opponent whiffs an attack and you quickly punish, you’ll get a damage boost and likely take off 25-40% of their health. Battles in Samurai Shodown can last quite some time, but they can also be over in a matter of seconds depending on how well you’re able to capitalize on different situations.

It’s possible that the skill ceiling isn’t as high as other fighters, but you also can’t get by on blind luck. Go up against a foe that understands everything about Samurai Shodown and you’ll likely be finished in less than a minute. It can be frustrating, but it’s also a fighting game that calls you back time and time again because of how deceptively simple it is. Characters aren’t unlike what you’d find in the Super Smash Bros. series. Everyone shares the same inputs but has drastically different attacks. It makes for a game that is easy to pick up, but hard to fully master. 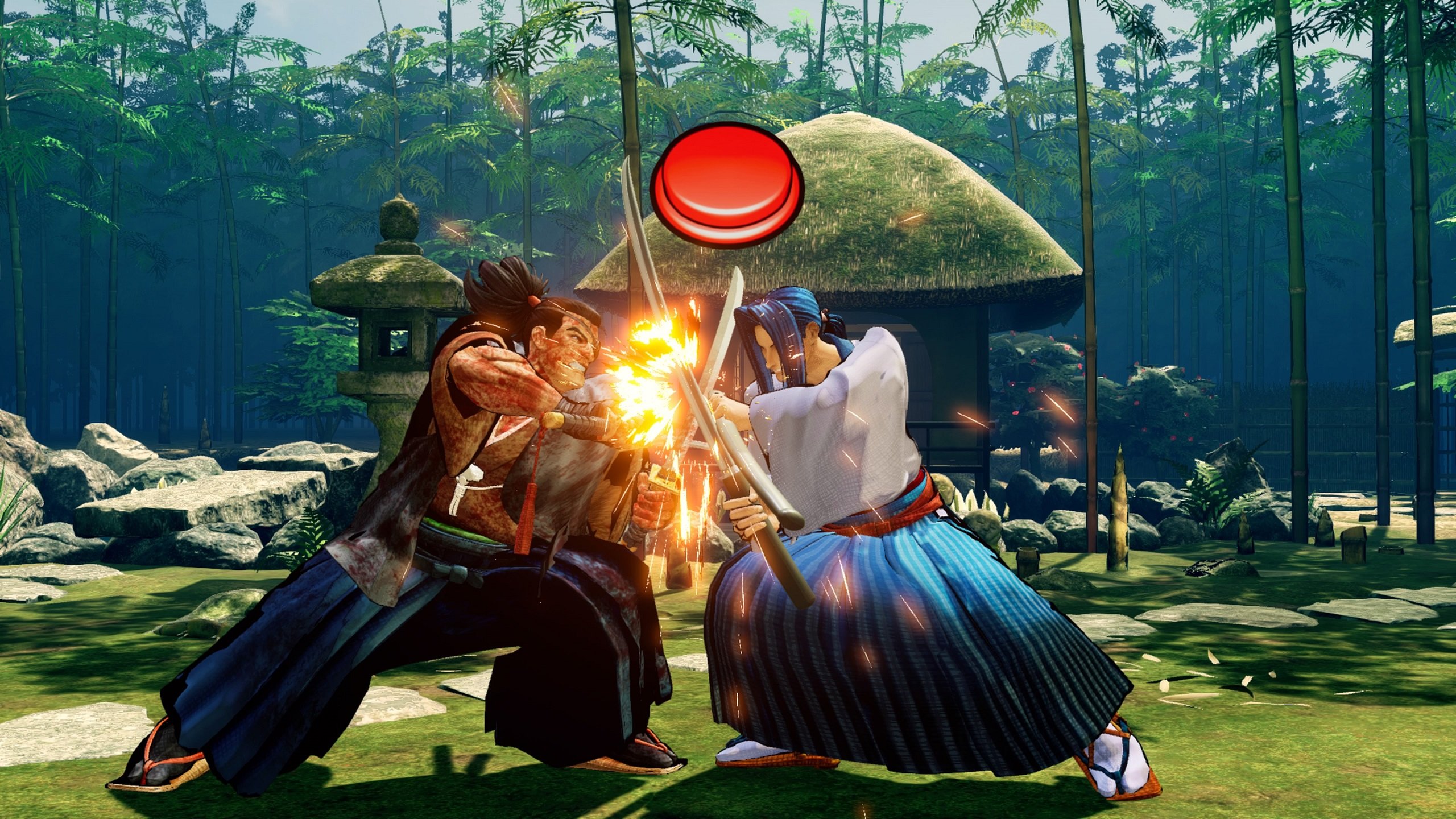 On top of that simplicity is a layer of mechanics that low to mid-level players will likely never experience. You have weapon clashes, weapon deflections, sword clasping, super special moves, weapon flipping techniques, and the lightning blade technique. These are moves that could reasonably kill an opponent in a single attack, though reckless use of them will see you waste valuable resources that could cost you the match. It’s a very high risk/reward system that urges you to think cautiously at all times and pays off immensely when connected.

The lightning blade, for instance, is an attack that requires you to enter the “Rage Burst” mode of your meter. You do this by pressing L2, which enters you into a state where you’ll deal out double damage for a short period. While in this state, you can press L2 again to unleash the special attack, or simply ignore it and opt for the double damage buff. Regardless of whether or not you utilize this finisher, going into rage burst will then cancel out your meter for the rest of the match. It creates scenarios where your opponent may enter rage burst and you’ll end up not attacking in an effort to ruin their plans.

Your defensive tendencies can be countered, however. Throws are now a part of Samurai Shodown and while they don’t deal damage, they allow you a few frames to turn the tides on particularly defense heavy foes. Here, you can activate rage burst, walk straight up to an opponent, throw them, then hit them with the lightning blade while they’re unable to block. It’s thrilling, but it should also show you how every different mechanic feels particularly calculated for every possible scenario. 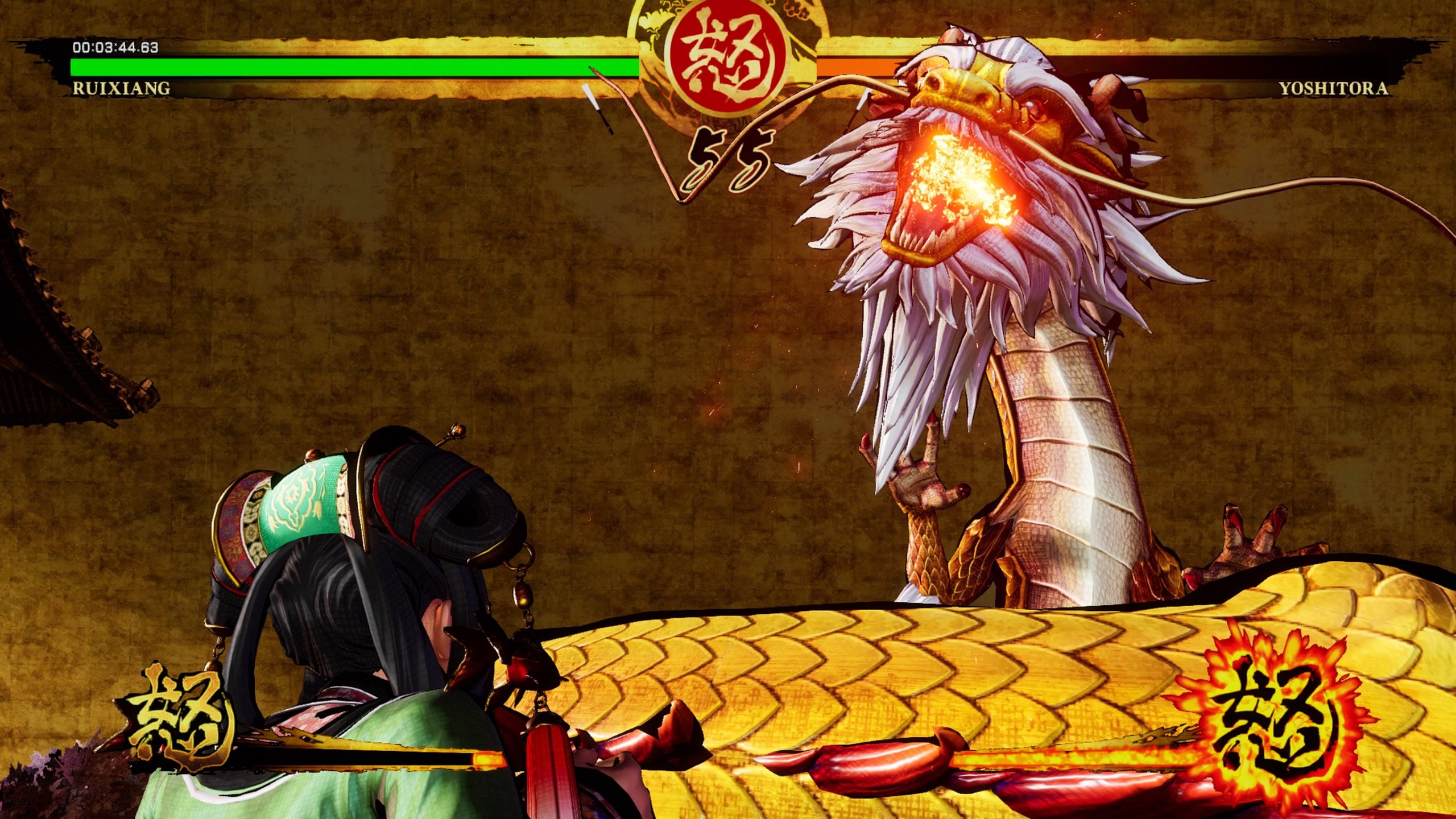 That’s what I see the most with Samurai Shodown. Nothing in this game feels like fluff or pure spectacle. Maybe the super specials have elongated animations, but they can only be used once per match and will pause the timer when playing out. The overhead “surprise” attack might not be effective at every moment, but it’s another tool in your repertoire that leads to diverse mind games. More than most fighters, Samurai Shodown is about playing your opponent instead of your own character.

That lack of fluff applies to the roster, as well. While 16 characters may not sound like much, every one of them is unique. There are no repeats and they all serve some kind of function. Haohmaru is the all-rounder of the group (basically Ryu from Street Fighter), Nakoruru is a mix-up goddess, and Earthquake is the giant grappler. They might be archetypal, but you’ll likely end up wanting to play all of them instead of focusing solely on the one character that draws your eye. It says a lot when I even the character I consider “bad” – newcomer Wu-Ruixiang – is someone that has a lot of functionality.

The only thing that holds this game back is that the content is a little limited. The core fighting on offer is excellent, but there isn’t a whole lot to do apart from fighting your friends, taking that fight online, or battling the AI. An interesting machine learning ghost mode is here but was not active before embargo for testing. A neat challenge mode against said ghosts is also present (with parameters to fight 10, 50, or 100 at a time), but it’s mostly just more arcade mode. Even the gauntlet option – a series of battles against every character in the roster with a single life – is just another replacement for arcade mode. I like that offline content hasn’t been forgotten, but it’s not very diverse. 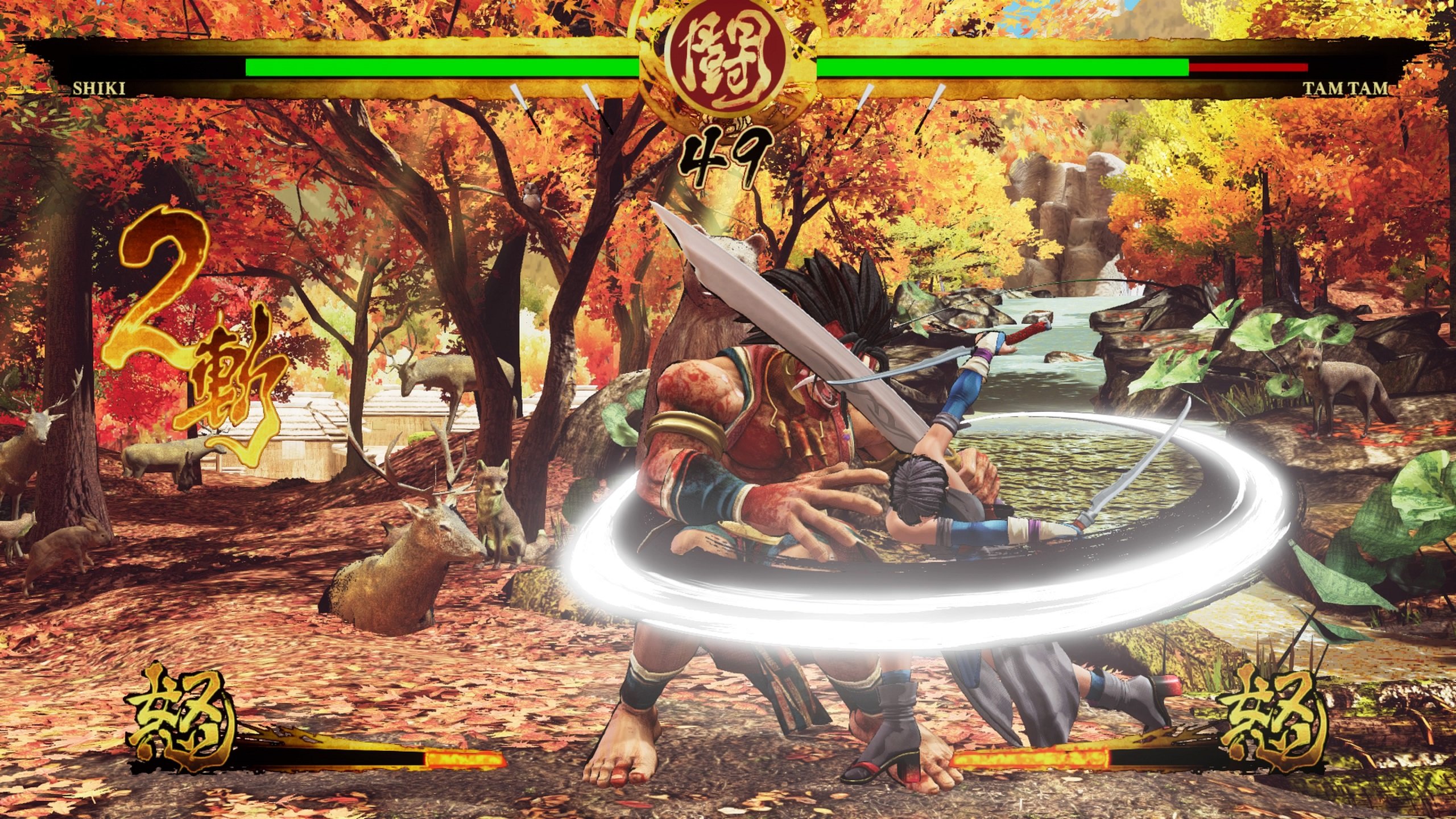 One also needs to consider that DLC is a part of the plan. While you can nab the season one pass for free if you purchase this within the first week of release, extra fighters don’t help much if you don’t gel with the game. I happen to be very satisfied with what is here, but Samurai Shodown is a bit of a tough sell at $60. The real clincher is that everything here is done incredibly well, but that may not be enough for some.

You also need to consider how the online operates, which I would say is adequate. This isn’t like how Mortal Kombat 11 runs with rollback netcode and is practically flawless, but it’s also not as disappointing as King of Fighters XIV was. Even against opponents with two bars, I was able to have a relatively decent time online. I didn’t get a huge pool of players to test against, but completely unplayable matches were a rarity. I mostly landed in games where inputs were off by just enough to be frustrating but was something I could adjust to for a rematch.

My best experience was playing with my best friend, though. Much like how Street Fighter IV brought us back to being kids, the two of us couldn’t stop competing with each other. I’d find what we assumed was my best character and after stomping my friend a bit, he’d finally beat me and we’d restart the process. I learned I absolutely suck at Samurai Shodown, but he’s not infallible. That back and forth where two minds meld and get into the zone, putting their worries aside and building their friendship over a shared experience. That’s exactly what the arcade scene was and Samurai Shodown captures that well.

Above all, Samurai Shodown proves that SNK still has its fighting spirit. King of Fighters XIV wasn’t an accident and it seems like any future games won’t be, either. Now we just need to get Capcom back on track.