This is the way the world ends

There’s a fatalistic cycle at the heart of Rust.

Every life begins the same. Players spawn on the shores of an uncaring island, naked and ill-equipped to make it through the day. Every life ends the same, too: with the clinical inevitability of a server wipe. The world-ending reset might come after a week. On another server, it might take longer, but there’s no avoiding it. The entirety of Rust is bookended by the chaos of a fresh spawn and an inescapable death-by-reset. They’re the only two universal truths in a hostile world. You’re born. You try to stay alive. The server wipes itself clean. And then, everything starts over.

It’s what happens in between those moments that matter. 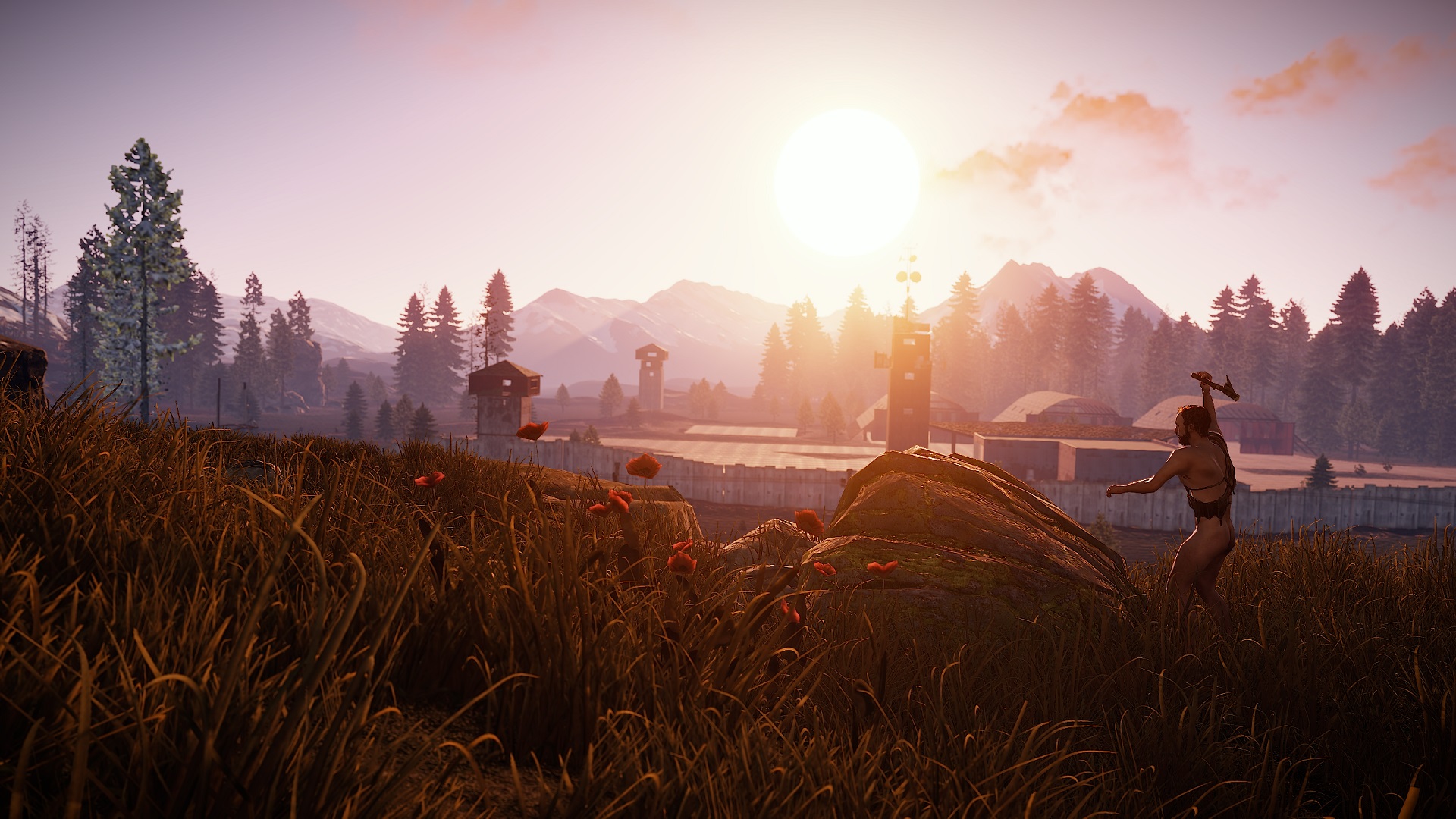 Rust is a great survival game in the sense that almost every part of it is openly hostile toward players. From those first tentative, dong-flashing moments after spawning, right through the player-driven arms race of base building and nighttime raids, Rust rarely allows players to let their guard down. It can be unwelcoming — discouraging even — to spend time on one of Rust‘s randomly generated islands. But with either patience, grit, or some combination of both, those who persevere will find a beautiful playground where unpredictability reigns.

It’s difficult to boil a game like Rust down to its most basic elements without it sounding dry. Like other survival games, the only real goal is staying alive. Mostly, this means investing a considerable amount of time into chopping down trees and smashing rocks for stones and ores. Collecting resources isn’t exactly the most thrilling activity, but Rust does feature subtle systems that make the process snappier than one might think. For example, upon striking a tree, a red spraypainted “X” appears nearby on the trunk. Hitting the X grants an incremental bonus to the wood resources on each subsequent chop, both breaking up the monotony of repetitive actions and rewarding players for paying attention. Mining rock nodes has a similar effect, with sparkling points indicating the sweet spot. While you’ll still spend plenty of time grinding for much-needed materials, earning small bonuses makes it a bit more palatable.

But farming resources like wood and stone are only useful if you plan to use them for something. And in Rust, it’s imperative to build a shelter for protection from both the elements and other players. With a few hundred pieces of wood tucked away, players can craft a building plan and begin constructing a small home of their own. Rust‘s modular building system makes slapping a small base together easy enough, as walls snap to foundation tiles without much fuss. With practice (and enough resources), players can either reinforce their structure with sturdier defenses or focus on building a massive outpost with loot rooms, furnaces, and dozens of interior design flourishes.

Though establishing a base of operations is vital to staying alive, experiencing Rust‘s chaotic social dynamics are where the meat of the game is. Servers can host anywhere from 25 to 200-plus players at any given time, each of whom is running around the map searching for crafting components, building bases, or looking for a fight. Rust maps tend to be large enough that encountering a solo player in the wild feels inherently dangerous and unpredictable, but the community’s penchant for volatility means that griefing and hateful language are prevalent. Of course, every player’s experience will vary depending on server selection, but it’s not uncommon to be assaulted by another player the second you cross paths. For those who tend to err on the side of non-confrontation, encountering other players will undoubtedly be exhausting and frustrating. But if you can look past a community that tends to be toxic or find a more welcoming server, Rust‘s sprawling plains and toppled landmarks are an excellent backdrop for player-driven storytelling and pitched, dramatic moments. 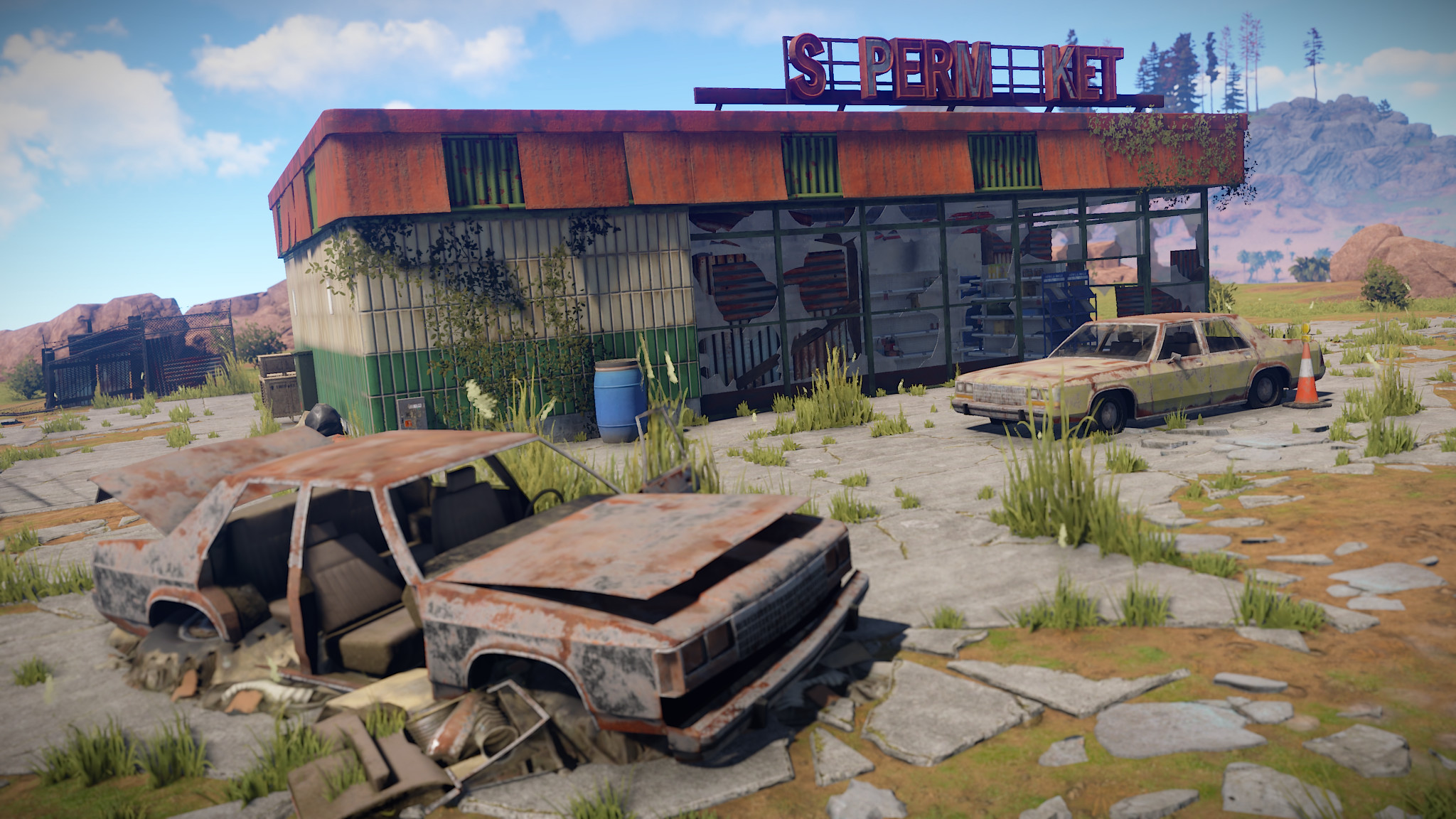 Rust is at its best when players strike a balance between creativity and role-playing. There aren’t many games capable of generating the kinds of self-contained experiences like those found in Rust. The lifespan of a server is marked by daring raids and gunfights that cut through the otherwise still air. Random encounters with players can lead to uneasy alliances just as quickly as they can devolve into tense standoffs over resource nodes. There’s almost always something happening on a modestly-populated Rust map; it’s just on players to either seek out interaction or drum up some chaos themselves.

So much can happen in Rust over the course of a week. Overcoming the elements is no small task in and of itself, and the game’s punishing survival systems make it hard to recommend to everyone. But for those who are willing to put the time in and stick with it, Rust provides both a social sandbox and a deep, functioning crafting system. At times, it feels like anything is possible in Rust; like witnessing players double-crossing one another or stumbling upon a small sheet metal city in the desert. You just have to accept that nothing is permanent on the player-driven island. And sooner or later, you have to build everything back up again.