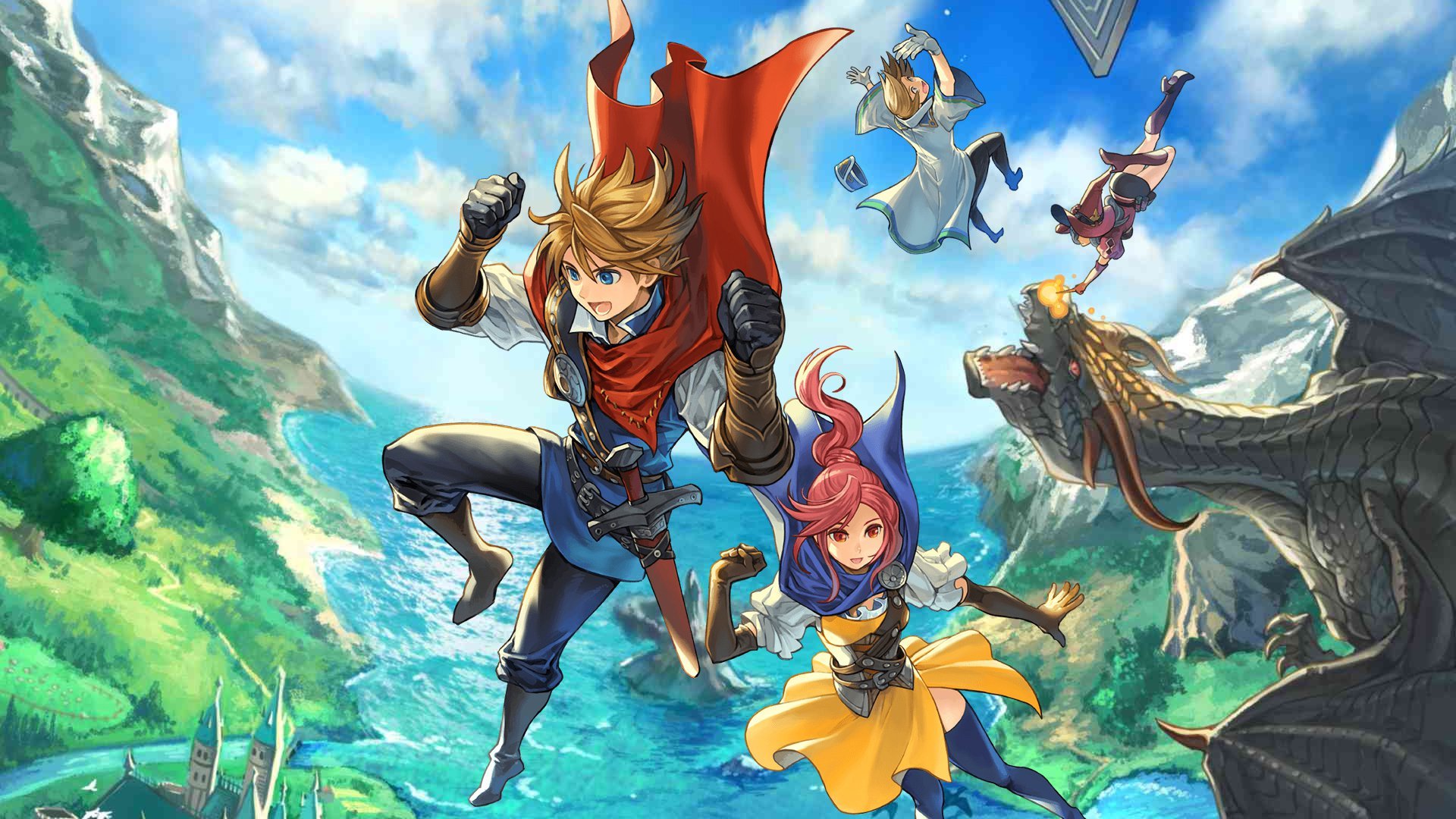 Every other week, it seems like there is at least one game that comes out that was made from one of those readily available game development software that lets almost anyone make a game. The game creation software of choice is usually either Unity or Game Maker but once in a while there is a game made using a very unlikely piece of software.

That unlikely software is RPG Maker, which unbeknownst to many, has been used to make some pretty notable RPG titles and now it’s on the 3DS for the developer on the go. Will this lead to the creation of the next great RPG? Is it even good enough to make stuff? Join me on this quest, brave soul.

RPG Maker Fes is part of a long running series of RPG creation games which first debuted on the Super Famicom in 1995. More of a creative software than an actual game, RPG Maker provides users a framework and tools to create their very own Japanese-styled role playing game. The RPG Maker series is also on the PC, where its much more robust offerings over the console versions has led to the creation of commercially-released games, among these few releases are the critically praised story-driven To the Moon and Japanese horror game Corpse Party.

Seeking to streamline the process of RPG creation by its PC cousin, RPG Maker Fes is much more accessible and on one of the most popular portable gaming consoles that can fit in your pocket. While nowhere close to the RPG game making software as the PC version, this version for the Nintendo 3DS is no slouch. RPG Maker Fes still offers a lot of depth and tweaking for those wanting to get really into it, and creators crazy clever enough to learn everything at their disposal can accomplish pretty amazing things.

The best new feature of RPG Maker Fes is that it allows creators to easily upload their creations online and thanks to a free RPG Maker Fes player app for 3DS, any 3DS owner can download and play the creations for free. This is a brilliant move that can build a community around the game and improve content through user feedback. Hopefully, this will teache kids (and childish adults) that game development is not easy.

For those wanting to jump in thinking they can make the next great RPG, those people may want to hold onto their armored horses just yet. RPG Maker Fes is not an automatic RPG generator where you check off some boxes and hit ‘go’ to instantly make a top-down 2D Japanese RPG. It’s a very much a set of tools in a neat software package that requires a lot of time and effort on the part of the creator to make something substantial.

Aspiring RPG designers might find themselves going in blind, since RPG Maker Fes does not offer a guide or tutorial in the game for its many tools. Most Japanese games that require a lot of investment on the player’s part will often have some sort of database of info or tutorial handily available in some menu tucked inside the game but there is nothing of the sort here. I don’t know if its a translation or text space issue but there are tool tips in the menus but they are a bit vague and are not at all helpful with explaining the tools.

I’m sure there will be very dedicated users online that will create extensive guides and tutorials that will greatly help other users after the game’s official release. Users can learn still learn their way around the creation tools themselves, as RPG Maker Fes has streamlined the creation interface to fit the small screens of the 3DS. The creation tools are divided into different sections to handle different parts of the game, swapping between them is easy enough. Trying to make all the parts of the game to come together requires some learning on the user’s end.

Other games that allow custom creation such as LittleBigPlanet and Project Spark have provided content such as single-player story or premade levels to get things started and to enhance the experience as well as add value for consumers but RPG Maker Fes has none out of the box. Fortunately for players, there will be some creations available for download online that can show off the muscle of game.

Users don’t really ‘make’ anything in RPG Maker Fes, they use the tools and framework to put the pre-made pieces together to make different parts that form to make an RPG in the end. Building these parts start from the maps, the biggest pieces of the game where everything happens, down to the smallest details such that are invisible to players. Everything that will be needed to build an RPG is available to the user, and perhaps the most original thing that a user can put into a creation in RPG Maker Fes is a story.

Building a map is the second most original thing a creator can make, it relies on how they put the pieces together and with the right skills, can make some pretty impressive stuff from the what I’ve seen. Maps are comprised by a grid and on this grid is where the pieces of different premade tiles can be placed to form backgrounds and environments. These tiles range from grass and floors to walls of buildings to even furniture.

Once a map is built, events and encounters are the next step and these are what allows for the major interactions in the game. Events are stuff that happens in the game such as cutscenes, dialogue, music, etc; and this part is the closest thing to programming in RPG Maker Fes with ordering and rigging stuff to work together to bring the RPG to life. Encounters are what governs part where enemies that show up to fight in combat, from the enemy mob composition and location. Combat can be optional if you’re trying to make an RPG that is purely a storytelling experience.

From the big stuff such as maps and events, users can tweak to smaller stuff such as characters and other values. Characters include those in your party, NPCs, and enemies; all of which will have premade sprites and portraits available for the user to choose. While these tools let you do a lot and are very much adequate for the platform, they’re still not as complex as the PC version, that allows for cool stuff like scripts and original artwork.

RPG Maker Fes does favor designers and artists over programmers, but it still takes some logic and planning to effectively implement stuff like events to create elaborate things like cutscenes and balancing combat.

While the tools can get you into tweaking small stuff, the visual assets are what can hold creators back. Users are locked into the character sprites and other visual assets that are provided in RPG Maker Fes, even though the 3DS is more than capable taking in image files and would be perfect for creating art using the stylus. This move was likely due to the game being online and on a Nintendo system to prevent unsavory content from reaching young 3DS users.

This is the kind of software that requires a lot of time investment, mainly because doing some of the simple stuff can take a bit longer than it should be. The creation interface, while streamlined for the 3DS, works okay but is not the best, it’s very much limited by the small low resolution screens.

Zooming out to see a larger view of what you’re working on is not an option in the RPG Maker Fes, which makes the whole creating process feel cramp and claustrophobic at times. The larger screen 3DS XL models will not help with that since those models will just upscale the same screens on the smaller 3DS models.

Scrolling through the pages for the numerous different visual asset tiles (grass, doors, trees, etc) can be a slog due to the small screen size. The tiles are also organized in a certain way that doesn’t really make much sense with no labels or sections to help quickly find what you need. Typing in dialogue is with a stylus is not the best thing in an age of soft keyboards on smartphones, as well as a character limit less than that of a tweet per dialogue text box and users need to make multiple text boxes to have a continuous flow of text.

I’m not saying that learning your way through the menus is not possible, it’s just that RPG Maker Fes does not make it easy for creators to use the tools and menus. Lots of detailed planning and learning the tools definitely helps creators, which is something that should be done by anyone who is seriously making something worth playing.

In the Japanese release of the RPG Maker Fes, additional character sprites and other visual content were sold as extra DLC. There are no additional packs or other content available as of the writing of this review for the review code. No announcements yet of if or when DLC will be available in the west or cost but it has been mentioned that crossover content from Disgaea and other NISA properties will be available in the future.

I looked up some videos of the Japanese version of RPG Maker Fes, and I was blown away by a few brilliant creations. One was a modern day zombie themed game named All Guns Blazing, where all the combat encounters are entirely made by jerry-rigging the event creation system to create an original light turn-based combat system. This is the kind of brilliant stuff that users make using existing tools in unintended ways to create something new.

While RPG Maker Fes is not the best at what it does, it certainly is very capable in doing a lot despite of its disadvantages. It also serves as a learning tool to give users interested in game design. There is great potential for user-created content in RPG Maker Fes, but similar to many user-driven games, the quality of the games are entirely at the hands of the community.