Beam me up, ninja

When I heard of a game concept that starts you off at the last boss and takes you back through his castle as the story progresses, I was intrigued.

Sadly, the mere premise of Roving Rogue is probably its strongest quality. 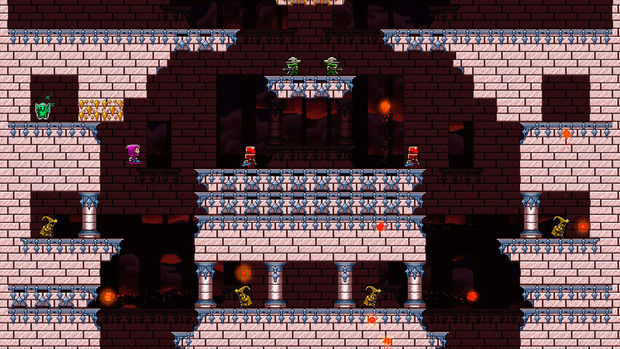 The basic gist is pretty genius. Players will take control of Kurt the Righteous, who has just slain the final boss of the game. But what happens when said big bad dies? You can’t just jump out of a window at the top of his massive fortress, right — you have to walk back through where you came from. That’s what you’ll be doing throughout the course of Roving Rogue.

Kurt only has one mechanic to master, so you won’t get too flustered as you’re busting your way out. Using a two-button system, one button jumps, and the other teleports. By quickly tapping the latter button you can warp a short distance, and holding it will stop your progress and allow you to aim a cursor in whatever direction you desire; it’s a lot like Daud’s blinking power in the Dishonored DLC. It’s an easy concept to pick up, and it works very well. Players can opt to make a lot of jumps manually for safety, or go for a riskier teleport jump at nearly every turn. It makes every platforming portion a choice, but you can only teleport through specially marked “golden” walls to prevent you from breaking the game too hard.

While the controls are on point, the levels on which you perform these antics are a mixed bag. Once you’ve played the first 10 stages or so you’ve basically seen it all, a feeling that’s augmented by the fact that there are only six enemy types in total, all of which essentially operate in the same patrolling manner. There are some new ideas presented on occasion like darkness, and a switch between horizontal and vertical layouts, but it never really iterates beyond that. Four player co-op is definitely a big draw if you happen to have three other people on hand.

Like the level design, the way the developers have chosen to approach the lore is also both brilliant and flawed. Although the premise is based on Kurt’s tired old memory loss trope, you’re basically rediscovering the fluff of the game’s universe as you play it. Picking up collectibles will in turn decrypt diary entries explaining the initial journey throughout the castle, and why you’re actually doing it. It even lends itself to multiple endings if you find enough.

On the flipside, there’s also a less stylish storytelling element — Twitter feeds. I can’t stand these, as they’re basically a collective of memes and hashtags that are seemingly chosen at random, presented between levels. They’re easy to skip, but feel wholly unnecessary. As for the visual style itself it’s a bit plain when it comes to most of the game’s animations and structures, but I actually dig the Loderunner feel to it, and as I stated previously, it does play well.

Roving Rogue failed to really capture my interest throughout the entire adventure, but from a raw gameplay perspective I had some fun with the platforming bits. You’ll enjoy it even more with friends.