For its first game, developer No Goblin seemingly subscribed to the K.I.S.S. school of thought: “Keep it simple, stupid.” But, perhaps the studio misunderstood the acronym to mean “keep it simple and stupid.” That’d explain how Roundabout revels in its own absurdity while revolving around a rock-solid gimmick: rotation.

Yes, the notion of motion is at the center of Roundabout. There is literally not a moment in gameplay where action is at a standstill. Even the most innocent, non-meaningful proceedings in Roundabout squarely feature its constantly spinning limousine — a trademark that it rightfully relies heavily upon. 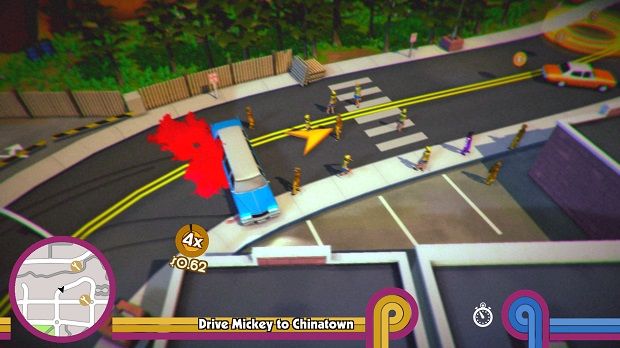 Behind the wheel of this luxurious, tumbling vehicle is Georgio Manos, a silent but savvy type. See, she knows that in the business world, personal #brand is everything and differentiation just might be her meal ticket. As such, she’s become the world’s first revolving limousine driver (although, not the last). It’s a marketing strategy that probably comes off as illogical at best and wantonly reckless at worst, but Roundabout isn’t the kind of game whose motives you question.

No, it’s the sort of game where you just enjoy the ride. Manos, who’s taxiing — err, limoing — passengers around, ironically takes a backseat to the wacky citizens of the keenly named town of Roundabout. Through full motion video scenes before and after every trip, we are introduced to the likes of a DMV instructor who, oh yeah, also happens to be an unintentionally racist baseball coach (what’s it to ya?), and an activist who definitely didn’t do anything wrong, but we should probably make a getaway as quick as possible. And then there’s Beth, who’s, well, she’s Beth.

Every encounter with Roundabout‘s characters is awkward and forced; it’s labored and sometimes cringe-worthy. Make no mistake, though — that’s precisely what makes it so lovable. No Goblin nailed the amateur production values that watermarked FMV games of decades ago. Each bizarre clip ranges from chuckle-worthy to memorably funny, and drives the desire to pick up yet another passenger as soon as possible.

However, once in control of the limousine (if ever truly “in control”), Roundabout continually proves that it’s no joke. The very first attempt at steering it along through a rudimentary driver’s education course feels like an impossible undertaking. The clunky, erratic car just can’t be effectively guided. That’s saying something for seasoned videogame players that have essentially spent the better part of a lifetime moving an object from Point A to Point B as efficiently and problem-free as possible.

Minutes later, maybe a half-hour at most, something clicks. Suddenly, it kind of makes sense. This behemoth is still unwieldy, but there’s a method to mitigating damage. Weaving in and out of obstacles in an odd, elongated manner becomes second nature. Well, it does until a temporary relapse when trying to brute through a section; that never, ever ends well.

As crazy as it might sound, once able to somewhat control the limousine, Roundabout transforms from a bout of reactionary reflexes to a puzzle game that relies on pathfinding. Don’t get me wrong: execution is still very much key, but it’s a much simpler affair by comparison. Then, a jump maneuver is learned approximately one-third of the way through, and we can add a healthy dash of platformer, if we’re trying to nail Roundabout down to a genre.

Really, the fact that Roundabout eventually isn’t unendingly frustrating is a testament to No Goblin as a developer. By all means, this should be a game that’s incredibly off-putting, where its quirky humor is the saving grace. That’s not the case. It takes a while to get the hang of, but once that aforementioned click happens, it’s so supremely rewarding. 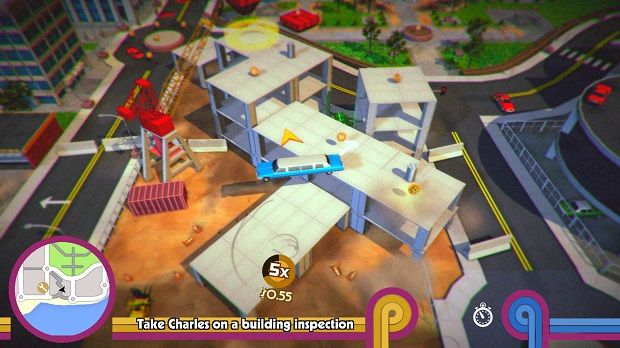 In fact, it’s not until someone wants to really dig deep into Roundabout that any of No Goblin’s missteps will become apparent. Every passenger ride comes equipped with a set of optional constraints to complete for those who fancy themselves the best damn revolving limousine driver in the land. These range from relatively simple (don’t use any upgrades) to incredibly difficult (don’t hit anything, complete very quickly).

In the process of trying to tick these off one by one, any particular mission may have to be attempted several times. Each go starts with the same few seconds of video (as short as you can mash through to skip) and the ride is marred by the same dialogue over and over. Suddenly, all of Roundabout‘s charm has turned irritating.

Likewise, Roundabout does a poor job of telling the player what the objectives are until after a ride has been completed. There’s no way to get a quick refresher on-the-go. In a broader sense, there’s no indication that a mission has been completed and that there’s no need to travel to that spot on the map anymore.

While those complaints are niggling to perfectionists, it’s not the takeaway here. What’s remarkable is that No Goblin took what had all the makings of a gimmick mechanic and turned it into something that feels like a legitimately useful staple, something that requires patience and skill to figure out. Roundabout manages to be simultaneously cumbersome and stiff, and brilliant and endearing — chances are you’ll go ’round and ’round. Actually, that’s precisely what you’ll do.