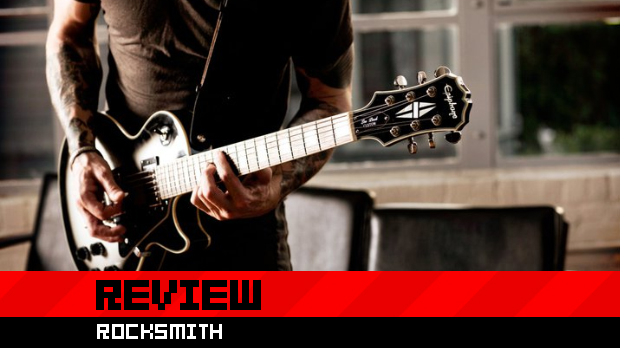 I have a short list of dream games I’ve been waiting for since my childhood. Most of them will never be made (for example, Dostoevsky vs. Donkey Kong 2020), and the ones that do get made are met by my grumpy “well, it took you long enough”-attitude — Rocksmith is one of these games.

Although Rock Band competitors haven’t fared well in the past — Guitar Praise, Rock Revolution, and Power Gig: Rise of the Six String were abysmal — Rocksmith proves there may be a niche to fill yet. It’s the perfect stepping stone between Rock Band 3’s Pro mode and having an actual guitar teacher, except you won’t have to own a bunch of useless plastic peripherals or be forced to play Soul Asylum songs an hour a week.

I spent a couple of years during my childhood halfheartedly playing a handful of instruments but never mastering one. I learned Blink-182 and Nirvana in the early ’00s like every other middle schooler who wanted to start a band, but I didn’t go very far. Practicing an instrument can be a grueling endeavor, made more painful if you have a bad teacher.

I thought Rock Band 3 was the answer to my problem, but it turned out to be an expensive, fruitless investment (albeit, a very enjoyable one). My friends laughed at me, trying to learn guitar through a plastic toy. They were right — a plastic 102-button toy doesn’t properly emulate a real guitar. Well, screw emulation because Rocksmith lets you plug in the real thing via the USB-to-1/4″ converter that comes packaged with the game. 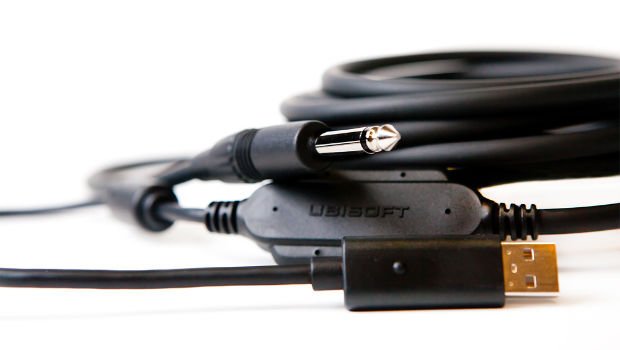 Any electric guitar with a 1/4″ inch jack (which is most of them) or acoustic guitar with a pickup will work with the game. I plugged in my fantastically average, decade-old $100 Johnson and was immediately on my way to relearning chords, techniques, and Nirvana songs. If you don’t own a guitar, there is a $200 bundle that comes with an Epiphone Junior, but I am wary of its quality due to generally negative user reviews around the net. Unfortunately, I didn’t get to test one myself.

Never mind Nirvana, though, because Rocksmith has the best lineup of songs yet in a rhythm game. Since the game is entirely built around the guitar, there is less genre variety and more of a focus on songs with a strong guitar hook. Ubisoft may not have thrown in money for the big hits that Rock Band has, but aren’t you tired of hearing “Smoke on the Water” anyway (it’s DLC if you really want it)? Instead, you get to play obscure gems from The xx and The Horrors along with established Pixies and Rolling Stones favorites. It’s all a matter of taste, but Rocksmith‘s set list kept me excited as I progressed through the game. 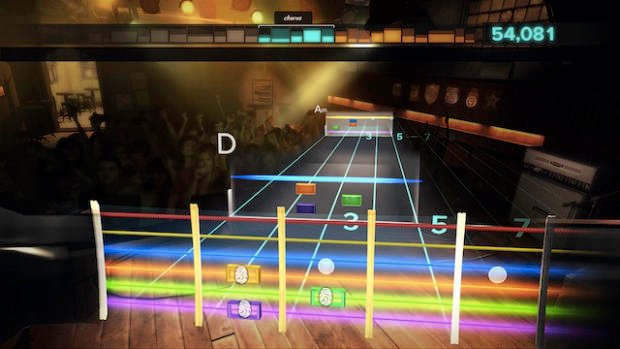 The basic formula of Guitar Hero has always worked, and it works here as well. However, there are subtle improvements that are necessary to adapting an actual guitar. Notes scroll at you from an angle, making them easy to read ahead of time. The notes eventually hit the guitar strings on screen, showing you finger placement and which notes will hit which frets. It can be hard to learn as a beginner, but you’ll eventually get the hang of it. The tougher part is memorizing the notation for all the different kinds of techniques (bending, slides, etc.).

There is nothing easy about learning an instrument, but that doesn’t mean it can’t be fun. Rocksmith does a great job of making the experience as painless as possible. The game dynamically changes the difficulty according to how well you are playing. If you fail to hit a couple of chords, the game will temporarily throw single notes at you until you improve, and thankfully, there is no way to fail a song. Remembering the symbols for tremolo, bending, and hammer-ons can be hard, but it’s tough to avoid this problem when trying to be authentic. 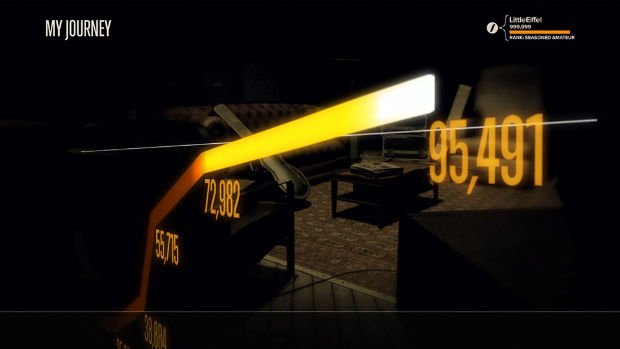 One gripe some players may have is that this dynamic one-size-fits-all difficulty is non-optional — you can’t pick “hardcore” or “easy.” If your skill level is through the roof, then you’ll get to experience the song at its most faithful. If not, then you’ll just have to improve. The dynamic difficulty is impressive and makes for a sensible default setting, but it seems like an oversight to exclude other options.

The main campaign of Rocksmith isn’t as flashy as its competitors, but it should provide enough incentives to keep the weak-willed interested. I found myself ignoring finger pains and soldiering on so I could unlock a new guitar or effects pedal. Each activity in the game earns the player Rocksmith Points (RSP) that let the player level up and gain access to more stuff. All the songs are playable from the outset, but RSP will give you new equipment and games to play at the Guitarcade. 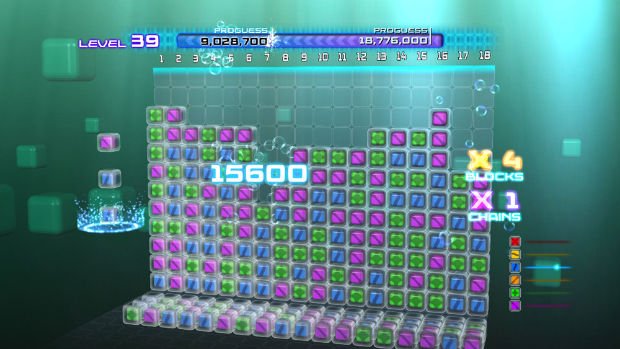 Guitarcade is another ingenious aspect of Rocksmith that turns the most boring parts of learning the guitar into fun, addictive activities. Learning your way around a guitar neck is a dull, time-consuming process, but it’s not so rough when hitting the right fret lets you shoot down a ship in a Space Invaders-like arcade game! As lame as it sounds, I found myself playing just for fun and realizing, “Wow! I just hit that note without thinking about it for the first time!” It’s moments like these that make Rocksmith such a worthwhile and enjoyable investment. Only during the technique lessons did I feel like I was dealing with “edutainment” software — a necessary evil, though the game does try to make learning chords fun with its own Guitarcade game.

The only place Rocksmith truly falls short is in its presentation. There is no voice-over actor who you’ll want to punch, but there are elements that are laughably bad. The audience and venues look so fugly as to be kind of endearing, but the same can’t be said of the momentum-killing load times between songs. The game also has audio latency problems, but I didn’t find them to be that noticeable. The game suggests using an external audio source, but I honestly wouldn’t worry about it. Rocksmith is pretty generous with your timing, anyway. 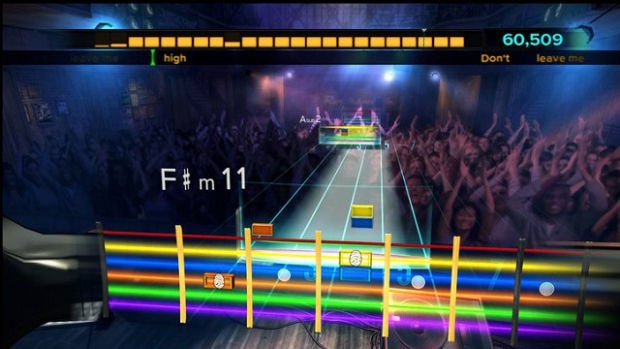 There are certain niceties that Rock Band 3 has spoiled us with, making it clear that some features are sorely missing in Rocksmith. Easily being able to practice a song by section, slowing the tempo, and having finger placement of chords clearly stated at all times are some things I’d like to see put into a future installment. There is no deal breaker here, but the game is clearly testing the waters. Hopefully, we’ll see a more refined sequel this time next year.

Rocksmith succeeds at being a learning tool that provides the right amount of motivation and enjoyment to keep an amateur invested. There is also enough here to grab the interest of an experienced guitar player — proven by my time playing with my veteran guitar-playing brother — but the entire experience is geared for beginners. The game will suggest you learn certain techniques and chords so you can master easier songs first before it recommends more difficult ones. After a week of playing, I feel like I have made some real progress not only in the game but in building a real-world skill that I’ve been desiring all my life.

It’s a wonderful feeling that makes it easy to overlook Rocksmith‘s little quirks. It’s as simple as this: if you want to have fun with friends in a rhythm game, buy Rock Band 3, but if you want to learn guitar, buy Rocksmith. It works, it’s fun, and no strange man with a handlebar mustache will force you to play Soul Asylum here.