A lot of things blew up big in the late ’80s: Bermuda shorts, TMNT, those shirts that changed colour when you got hot, displaying your sweat stains to the world. Also popular, as far as video games were concerned, was the scrolling beat-’em-up genre, or “brawler”, as you kids call it today.

By the time the ’90s dawned, the arcades were full of titles that featured the simple construct of patrolling the streets, mashing evil faces and eating chicken out of oil drums. Final Fight, Double Dragon, Vendetta, and X-Men were all games built on repetitive action, but they kept the coins rolling in thanks to their great visuals/music and addictive co-op gameplay. Eventually the industry moved on and, as the arcade gave way to Street Fighter II, Mortal Kombat, and other one-on-one fighters, the simplicity of the brawler fell by the wayside.

There were, however, a few brands that kept flying the flag for the genre. And in Japan, no franchise did this with as much pride as Kunio-kun, better known in the west via the River City series. Since the 1986 release of Nekketsu KÅha Kunio-kun (or Renegade), this long-running franchise has kept the spirit of the street brawler alive for generations. Indeed, this week sees the release of brand new entry River City Girls, developed by Shantae helmers WayForward Games. But, some 33 years since Kunio-kun’s debut, is there still a place for the humble brawler in 2019? Straighten your school tie and knuckle up, we’re gonna find out. 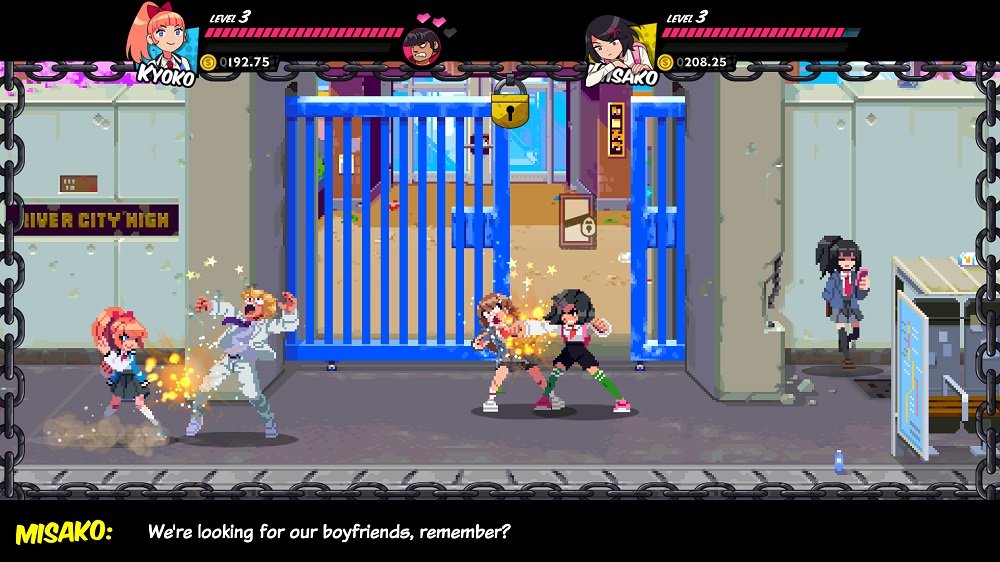 River City Girls is the story of rebellious besties Misako and Kyoko who, whilst slumbering in detention, receive a text message announcing the disappearance of their respective boyfriends Kunio and Riki (the heroes of multiple River City games). Without a second’s notice, the girls realise the best course of action is to break out of school, take to the streets, and beat the living shit out of everybody they come across in the name of love. That’s life in River City.

As they journey across town, kicking ass and forgetting names, Kyoko and Misako bump into a host of familiar faces, recognisable characters which will make Kunio-kun fans squeal with delight, without excluding newcomers from the fun. The girls also meet some brilliantly conceived enemies and boss characters – including a few surprise cameos – while on their dangerous mission to track down their missing beaus. The River City Girls narrative is spirited and entertaining, with some frequently laugh-out-loud funny dialogue. Things unravel a little toward the climax, unfortunately, culminating in a strange ending of convenience that, while amusing, is quite sudden and pretty unsatisfying.

Regardless, the journey to said climax is wholesome fun, littered with great jokes and genuinely heart-warming moments. Seeing appearances from River City alumni such as Misuzu – still shoulder-charging me into submission over 25 years later – shows the reverence held by WayForward for Kunio-kun. It’s a passion for the source material that embodies River City Girls from scene one to the end credits.

River City Girls isn’t a brawler in the Streets of Rage/Final Fight sense: a linear arcade game where players progress through a series of left-to-right stages. Nor is it an RPG in a literal sense. The truth lies somewhere between these two genres. In River City Girls, one or two players (local co-op only) brawl their way through an ever-expanding map, battling through various locations such as a school, a shopping mall, a fairground, a scrapyard and so on, all housed within the city’s six zones. Enemies respawn in these locations constantly, and occasionally players will be “locked” into a screen until a throng of baddies are defeated.

Kyoko and Misako travel back and forth across these zones, speaking with allies, completing side quests and gathering info, all in valiant efforts to find Kunio and Riki. Although chapters are clearly delineated by boss fights, the whole map – from first screen to last – remains open throughout the entire game. River City Girls is, essentially, a scaled-down open-world adventure, in keeping with some previous installments in the series.

While bustin’ heads, Kyoko and Misako earn XP and cash. The former powers up stats to help the dynamic duo venture into more dangerous territory, whereas the latter – an important commodity in RCG – is used to purchase supplies, gear and, most importantly, cool new moves for each girl’s arsenal. Both Kyoko and Misako have their own individual move sets, which start slim but build into a catalogue of bone-shattering strikes, throws, running, and jumping maneuvers. Kyoko seems to have better combo potential, but Misako has the Stone Cold Stunner. The agony of choice… 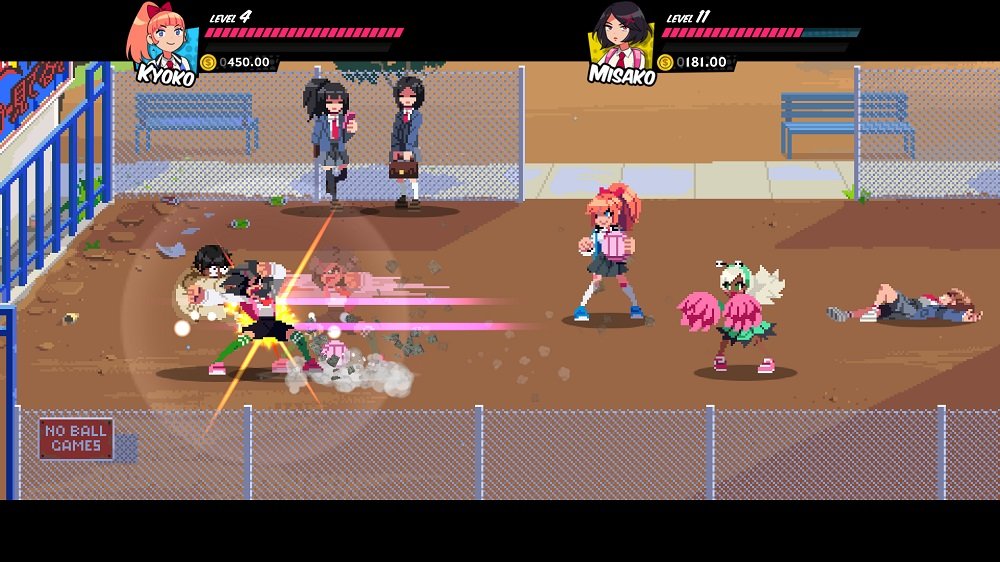 Combat is the spine of River City Girls, and WayForward have done a great job of building a fun and fluid fighting engine. While the adventure begins with simple four-hit strings, combos soon incorporate fighter mechanics such as juggles, wall-bounds, and enders. It does take some time – and a lot of fighting – to get to the point where your character displays true variety in their attacks, and this leads to the central theme of River City Girls’ gameplay: You get out of it what you put in.

River City Girls is a game that, essentially, gets better as you progress. What starts as a basic – dare I say repetitive – brawler eventually opens up to something more layered, but only once you’ve taken the deep dive. Unique gear, (for example items that prevent weapons from breaking, or that increase damage against male enemies) can be tactically applied to best fit battles. A unique “Recruit” system lets you call in defeated foes for Marvel vs Capcom-style assists, and your chosen character will eventually become an all-encompassing living weapon, loaded with cool combo attacks and devastating specials.

But all of this only really comes together as you progress deeper into the city and get plenty of cash, XP and broken ribs under your belt. As such, a solid commitment to walk-and-brawl gameplay is not only recommended, but required. River City Girls undeniably does great work at evolving the brawler genre, but non-fans may still find fatigue in the hundreds of button-mashing encounters our girls will face en route to glory. Fortunately, this will be nothing new to series/genre fans, who will gladly push through the slowish start, encouraged by RCG’s greatest asset: its fantastic audio/visuals. 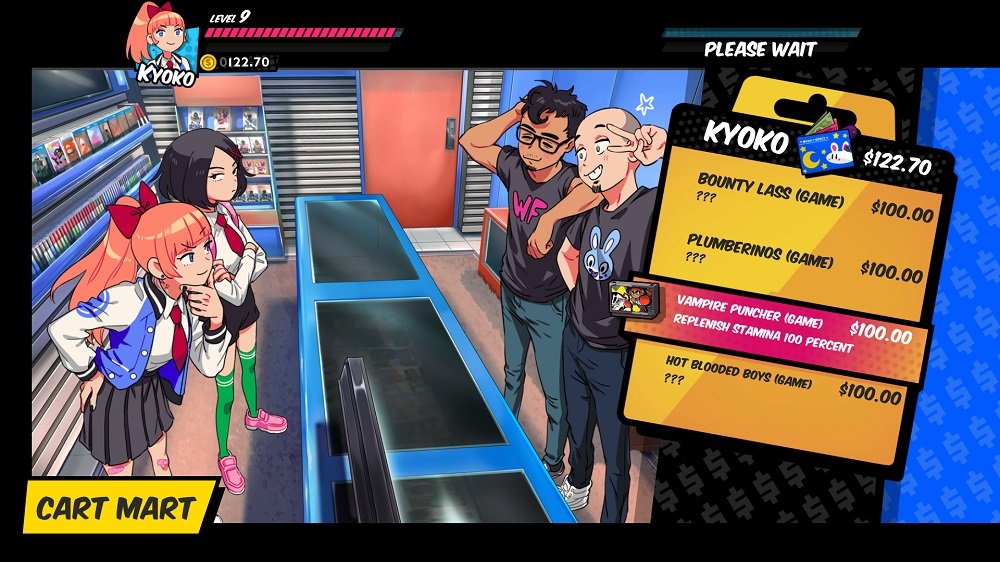 River City Girls absolutely knocks it out of the park in the aesthetics department. River City, its locations and denizens, are all crafted in beautiful, detailed and exquisitely animated pixel art, recalling a glorious bygone age of video games. The splash art used for conversations is delightful, as are the numerous manga-style cut scenes. All of the above brings life to enemies, NPCs, bosses, and the many unique store owners Kyoko and Misako encounter on their shopping sprees – in fact, the retailers are perhaps my favourite characters!

All of this visual splendor is backed by a brilliant retro-electro score featuring artists such as Chipzel, and peppered with dramatic, full-vocal songs composed and performed by Megan McDuffee. These pop tracks are utterly infectious, as proven by the fact they have been swimming in my head ever since I first heard them. River City Girls’ audio/visual design deserves to rank among some of 2019’s finest.

In terms of replayability, River City Girls offers a New Game+ option upon completion of its campaign, along with a tougher difficulty setting, numerous collectible quests, and further characters to explore. Ultimately, RCG’s lasting appeal comes down to the player’s desire to 100% each element of the game, as there are no other modes outside of the main campaign, not even a gallery, which is baffling by its omission. Despite this fairly bare-bones approach, I think River City Girls is worth its asking price, offering several fun sessions of exciting co-op action for you and your own bestie. 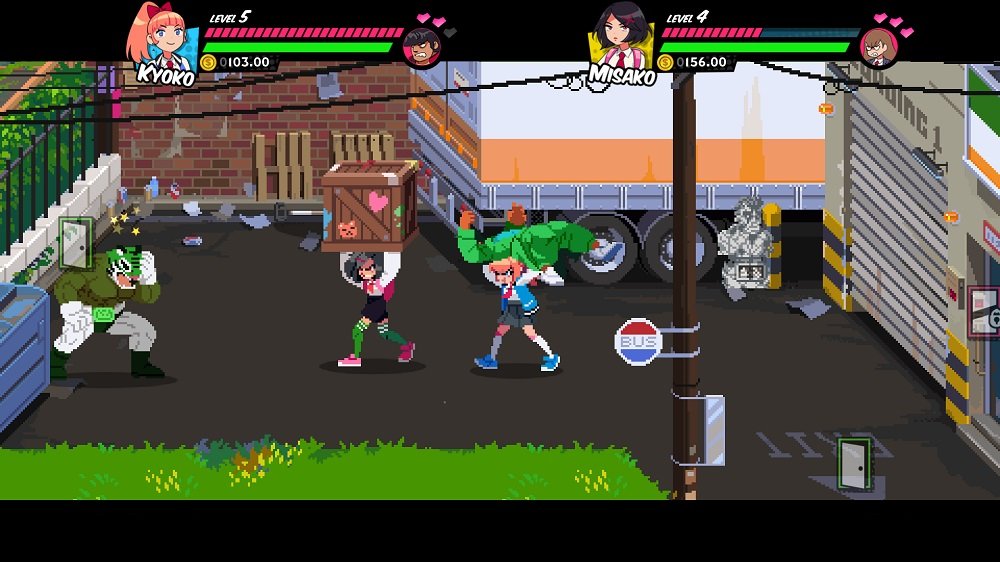 With River City Girls, WayForward has done stellar work with the Kunio-kun series, having created a love letter to the franchise as inviting to newcomers as it is to series veterans. On the flip side, a commitment to brawler gameplay is definitely required, as RCG only truly finds its sweet spot once players can unleash the potential of our psycho schoolgirls’ bone-breaking abilities. A co-op buddy also adds immeasurably to the experience. Here’s hoping that this is the start of future titles for Kyoko and Misako, as I’m already thirsty for more action from these great gals.

River City Girls succeeds in evolving both the Kunio-kun series and the brawler genre itself, offering entertaining gameplay, brilliant visuals, an amazing soundtrack and fun combat. While brawler fatigue, minor narrative flaws and a slim package threaten the experience, great characters, reverence for the lore and addictive co-op gameplay prevail, ensuring Kyoko and Misako keep throwing fists to the very last round.

[This review is based on a retail build of the game provided by the publisher. Former Destructoid writer Dale North contributed to the game’s soundtrack. As always, no relationships are factored into this review, and the reviewer never worked with Dale.]