Lady Luck is a cruel mistress

Typically, board games involving just dice aren’t my thing. I don’t like playing a game in which I feel I have no control in whether I win or lose.

Yahtzee is a prime example of this, while Risk is somewhere in between. Much like Monopoly, you do have to have some sort of strategy most of the time. However, because these games are so dependent on chance, those strategies often get thrown out the window.

With Ubisoft’s newly released Risk for the PlayStation 4 and Xbox One, this is basically what you get. You can plan and plot as much as you want, but if Lady Luck isn’t on your side, then you aren’t going to win — no matter what you do. 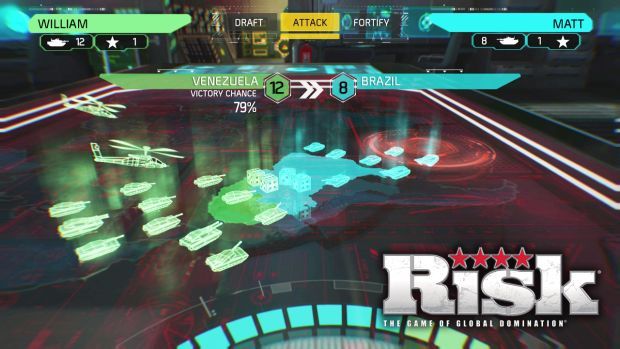 But let’s get to the meat of what we’re working with here.

What you’re getting with Risk is the board game translated directly for a modern audience using the classic 2010 rules. The mechanics and gameplay are generally the same with the main difference being the interface with which you’re playing.

There are some non-traditional touches, like a helpful AI companion called Iris. And the game offers animations for battle sequences, but nothing that is AAA worthy or will set it apart from its cardboard counterpart. Actually, you’ll find yourself skipping these battle scenes just to get to the end result. Thankfully, there is an auto-attack button to advance all that stuff.

I found myself watching these animations at first, but because the matches are so long, they quickly lose their novelty. It’s the same when it’s the AI’s turn. You’ll watch at first, but soon find yourself hitting the fast AI option and skipping as much as possible. It’s still not fast enough in a lot of cases, but it’s better than nothing.

If you really want to speed things up, then you’ll want to choose the “capture capitals” option when setting up your game. Otherwise, expect to play for at least an hour against two other opponents in the default setting; of course, it could be more or less depending on the amount of enemies you face. As far as difficulty, I never touched the actual play style of the AI, choosing to keep them balanced. However, you do have the options to make them more aggressive or defensive.

Risk is really meant to be played amongst friends and enemies — whether that be online or locally with up to four players. This is why the game exists. If you’re only playing the AI, then you’re literally only playing half of the game. 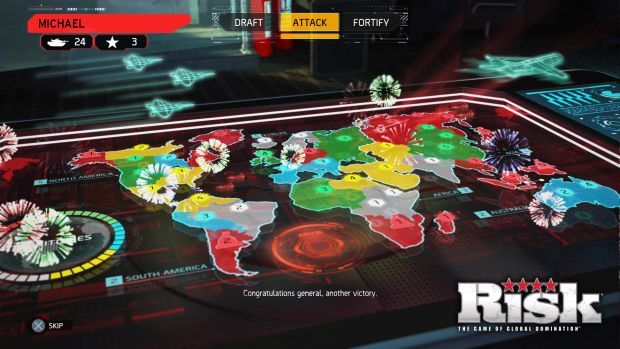 At its core, Risk is about just that, risk. And the charm of the game comes when you reach those moments of domination, only to be out-lucked at the worst possible times. Risk is cruel. Even downright heartless at times. If you go in expecting to always win, you’ll come to realize how foolish an idea that actually was.

There were times when I was completely dominating. I had more troops, more territory, the momentum was on my side. Then, all of a sudden, the AI would decide to hand in cards, receive massive amounts of troops, and sweep through my lands like a cool spring breeze.

At one moment you are king of the world, master of your domain and the next, nothing. You are worthless. Alone and about to be obliterated. For better or worse, this is what Risk is. In its simplicity is its utter cruelty.