I don’t know how I stumbled upon Rick & Morty, but I’m glad I did. More so, I’m glad it’s getting a decent amount of play considering how bleak it is, and that it’s branching out into more than just one series that we have to wait forever to watch.

Rick and Morty: Virtual Rick-ality might be a niche within a niche, but it’s a fine, albeit more muted, substitute for the show. 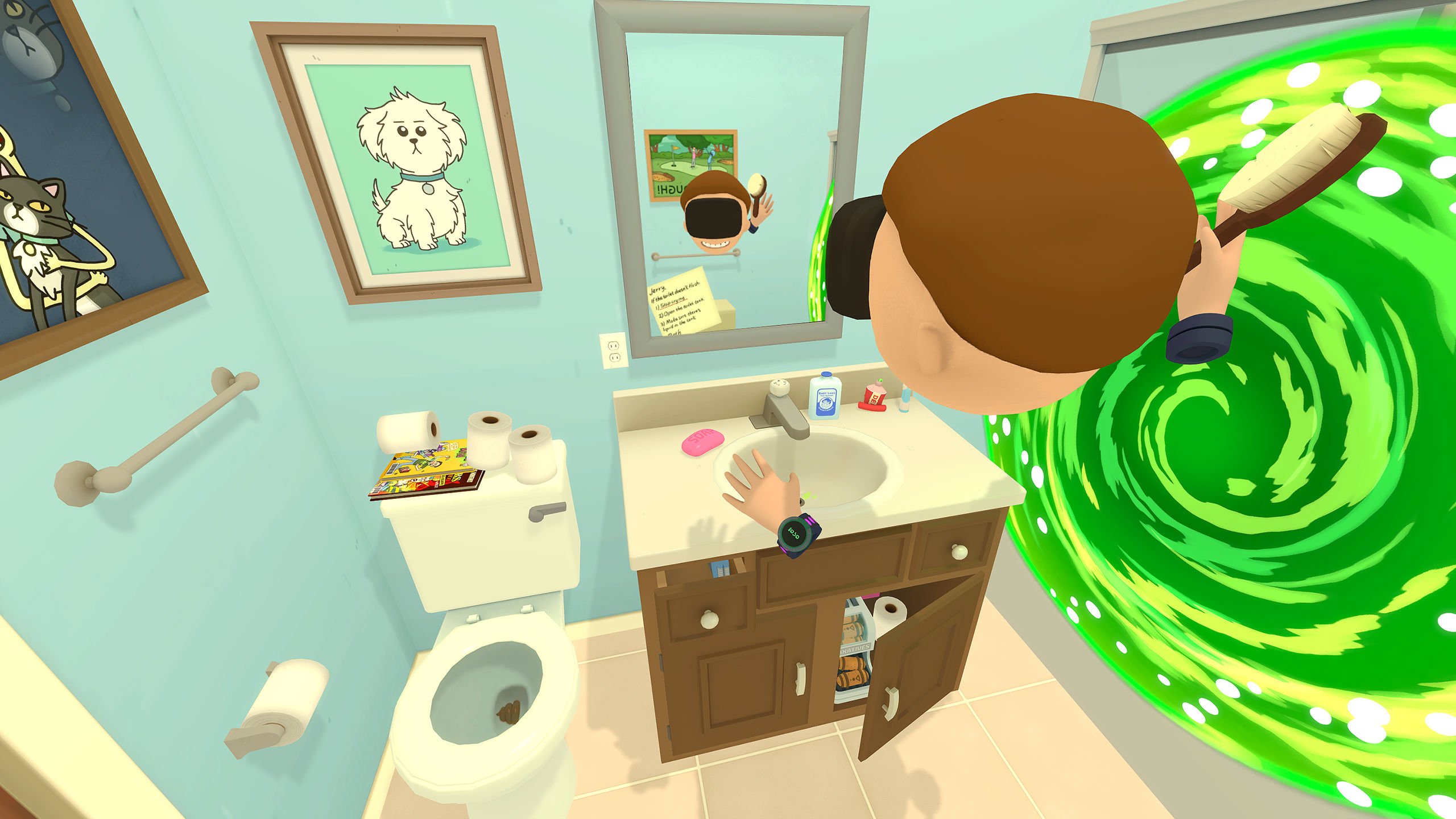 What Virtual Rick-ality really does right is its ability to showcase how intuitive touch-based adventure games can really be in the future. Staring at a watch to answer it without having to press anything is really cool, and warping around the room (read: because you can’t freely walk around in real life to traverse VR, yet) is more precise than a lot of other similar games on the market.

You need a huge room to play it though, and there’s really no way around it. Leaning down onto my carpet to reach into a virtual cabinet to grab a fake laxative and bumping into my real couch, when I didn’t even realize I was in that quadrant of the room, is still a rad feeling even a year after adopting VR. I just wish it was better optimized. I can play Robo Recall, one of the most demanding VR games right now just fine, but I had several issues with Rick-ality where I needed to reboot the game — whether it was a failure for one hand to accurately work, long load times, or severe stuttering after returning from the pause menu.

While there are some real head-scratchers built in every so often, the best way to describe the game is a collective of “light puzzles.” You can summon a Mr. Meeseeks (called a Youseeks here) that replicates your actions in another area you can’t reach, for example, and you’ll be tasked with figuring out a number of logic concepts — but instead of going to the bathroom and grabbing a laxative, stuffing it into an imaginary backpack, and clicking it, you’re actually picking it up and holding it the entire time.

What I mostly appreciate is the constant clowning on the player character. Even in death when answering the phone in purgatory, the “useless piece of shit” clone Morty is the butt of every joke. There’s even some funny details like touching the monitor of Rick’s computer, and having him call you a moron for not knowing it isn’t a touchscreen. At first Rick isn’t nearly mean enough (both in terms of the script and Roiland’s distanced performance), but he gets there. Morty, who Roiland also incredulously plays, is always spot-on. For those who are curious, Summer makes a brief appearance, and Beth/Jerry are marginally a part of Rick-ality.

Think of the game like an ever-evolving toolkit. Later puzzles might require categorical knowledge of everything before it, crescendoing into the finale brick by brick — but by the time it gets really interesting, it’s over. It took me around an hour and a half to finish the main story, and I screwed around for roughly 30 minutes after that. The best part of the finale is probably the fourth-wall conversation between Rick and Morty about how cool all of the post-game stuff is — they even poke fun at how there isn’t much else to do.

Rick and Morty: Virtual Rick-ality‘s irreverence reminds me a lot of JazzPunk, but more grounded and less adventurous, with all of the good and bad a structure like that entails. It takes a little while for the comedy to ramp up (which, in a short game isn’t ideal), but when it does, it hits all the right marks. Hopefully a follow-up will take us to more exotic locations and double down on a few of the tougher puzzles.